Albano
(a detail of G. Vasi's Grand View of Rome) British Museum: IInd century AD relief from Rome portraying Aeneas with his son Ascanius and the sow Aeneas saw in a dream

And now, lest you think this sleep's idle fancy, you'll find
a huge sow lying on the shore, under the oak trees,
that has farrowed a litter of thirty young, a white sow,
lying on the ground, with white piglets round her teats,
That place shall be your city, there's true rest from your labours.
By this in a space of thirty years Ascanius
will found the city of Alba, bright name.
I do not prophesy unsurely.

Virgil - The Aeneid - Book VIII. Translation by A. S. Kline 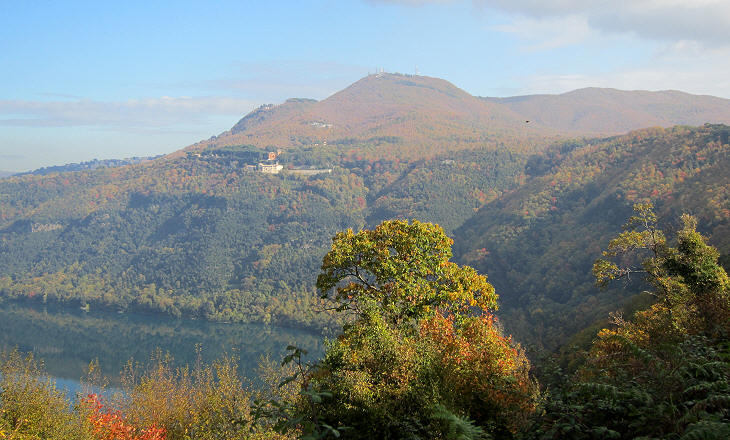 According to the legend the ancient town of Alba Longa was founded by Ascanius, son of Aeneas, the Trojan hero from whom the Romans claimed to descend. Because his father had seen a white sow in a dream Ascanius named the town Alba. In Latin alba meant white (hence we call a person with a congenital absence of colouring pigment an albino). Longa was a reference to the shape of the town which was built along the ridge which surrounds a volcanic lake. According to Dionysius of Halicarnassus, a historian who lived at the time of Emperor Augustus, Alba Longa was located between Mt. Albano and the shores of the lake. 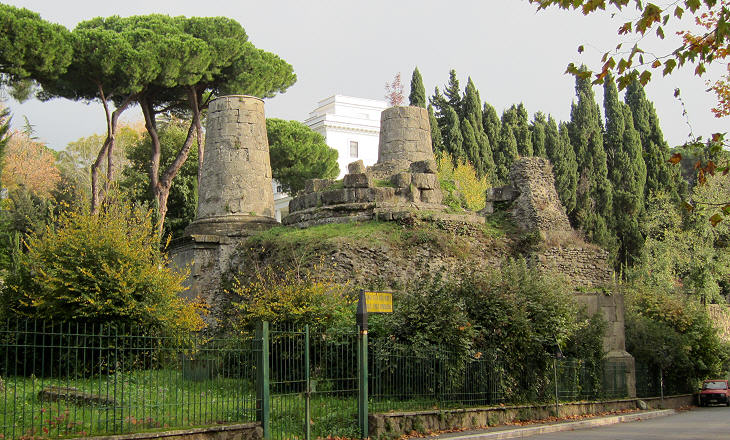 Thus, about the 7th of February, we set out on our return to Rome by the same way we came (..); nor made we any stay save at Albano, to view the celebrated place and sepulchre of the famous duellists who decided the ancient quarrel between their imperious neighbours with the loss of their lives. These brothers, the Horatii and Curiatii, lie buried near the highway, under two ancient pyramids of stone, now somewhat decayed and overgrown with rubbish. We took the opportunity of tasting the wine here, which is famous.
John Evelyn's Diary and Correspondence - 1645
According to Livy Alba Longa submitted to Tullus Hostilius, the third king of Rome, following the unfavourable outcome of a duel between three Roman brothers (the Horatii) and three brothers from Alba Longa (the Curiatii); a tomb with conic turrets near Albano is named after the Curiatii; it is actually a monument of the late republican period (also other tombs are named after the Horatii and the Curiatii). Some time after the duel, the rulers of Alba Longa betrayed the Romans and Tullus Hostilius ordered the town to be razed to the ground and deported its inhabitants to Rome where they settled on the Celio, a hill opposite the Palatine. 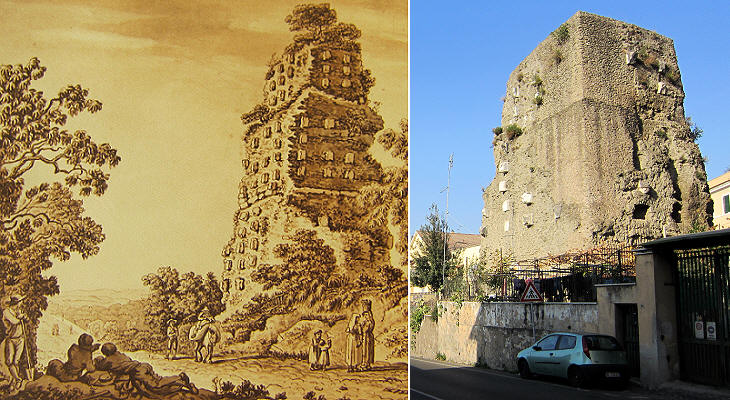 Torre di Pompeo, a Roman tomb at the entrance to Albano in a 1796 drawing by Carlo Labruzzi (left) and today (right)

A constant succession of ruined buildings, most probably sepulchral, attends the traveller to Albano; one of which, conspicuous from its height, has been attributed to Ascanius.
Sir Richard Colt Hoare - A Classical Tour through Italy and Sicily - published in 1819, but Colt Hoare visited Albano in 1796 accompanied by Carlo Labruzzi.
The development of Albano was due to Via Appia, the road opened by the Romans in the IVth century BC to facilitate their expansion in southern Italy and which eventually became Regina Viarum (Queen of the Roads), the most important road of the Empire. The settlement built at the end of a steep section of the road was called Albano, because there the road entered the former territory of Alba Longa; a white sow (see image in the background of this page) is the symbol of the town. Many wealthy Romans built their tombs at the sides of Via Appia even at a great distance from the city. A tall funerary monument at the entrance to Albano was thought for a long time to have housed the ashes of Pompey, who possessed a villa in the area. 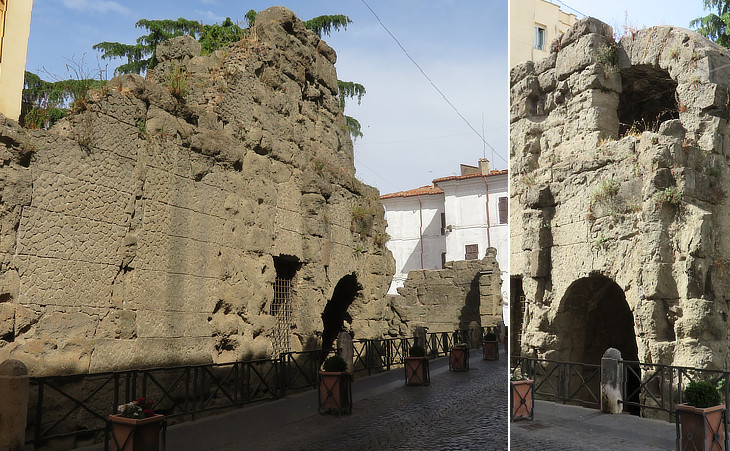 (left) Ruins of Porta Praetoria; (right) ancient lintels decorating the side door of S. Pietro which were taken from nearby Roman baths

The character of Albano dramatically changed in ca 202 AD when Emperor Septimius Severus built Castra Albana, a military town surrounded by walls, to house Legio Parthica II, a legion levied by the Emperor in 197 for waging war on the Parthians. The campaign was successful and the Emperor decided to station his faithful legionaries near Rome.
Albano was significantly damaged in the period which followed the landing of the Allies on the beaches of Anzio in January 1944. Heavy Allied bombing and the collapse of a building brought to light Porta Praetoria, the ancient main gate of Castra Albana. 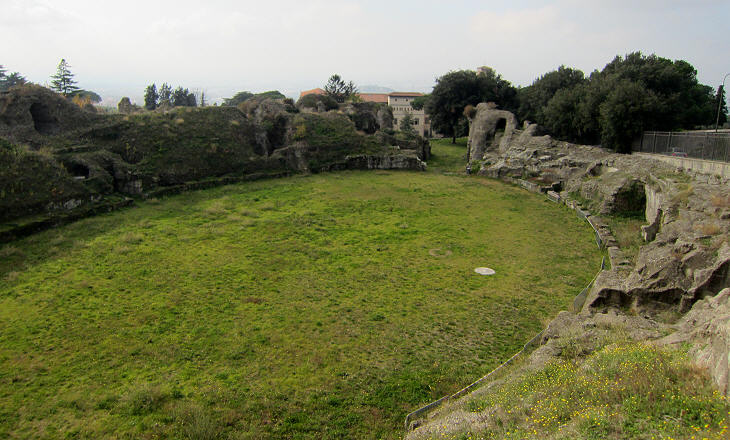 A door in the wall of a convent (..) admits one to the remains of the Roman Amphitheatre, now used as folds for goats, who crowd the rugged recesses of its caverned masonry, and group themselves picturesquely on its old walls. This was the scene of some of the worst cruelties of Domitian.
Augustus J. C. Hare - Days near Rome - 1875
Castra Albana had the shape of a rectangle having one of its short sides along Via Appia where Porta Praetoria was located; the military town was spread over the slope leading to the ridge surrounding Lake Albano. Very near the top of the ridge the legionaries built an amphitheatre which was partly excavated into the rock; it is estimated it could seat 16,000 spectators, an audience which largely exceeded the number of the legionaries (ca 6,000). 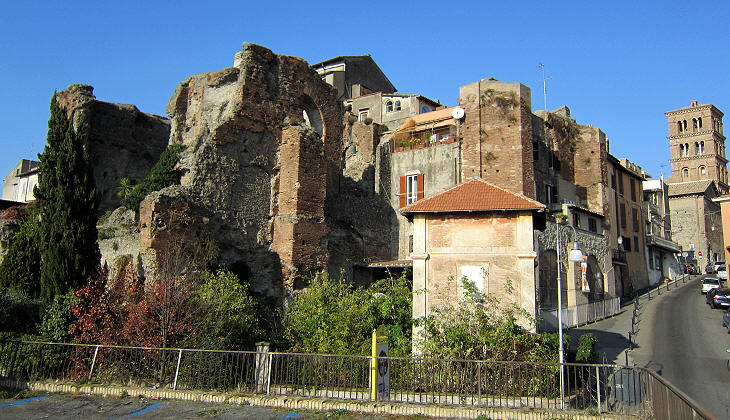 Emperor Caracalla, son of Septimius Severus, built large baths for the legionaries staying at Castra Albana to gain their favour as he had killed his brother Geta and feared their reaction. Imposing walls (in part incorporated into later buildings) are still visible at the lower end of the town, while a large cistern at its upper end provided a regular supply of water. Caracalla is best known for the baths he built in Rome. 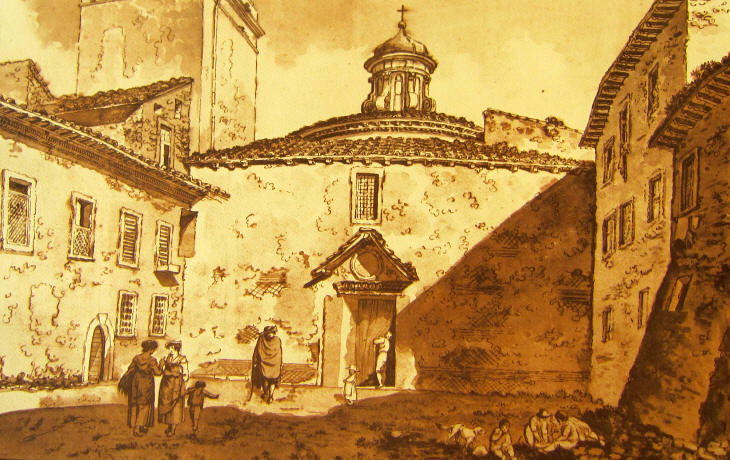 S. Maria della Rotonda in a 1796 drawing by Carlo Labruzzi

Towards the end of the Ist century AD Emperor Domitian built a large villa on the site of today's Castelgandolfo; the main building was surrounded by a very large estate which reached Albano. In the woods of his estate the Emperor built a series of small buildings which included a circular nymphaeum (holy fountain) or temple which was eventually incorporated into Castra Albana and utilized as part of Thermae Parvae (small baths). Similar to the Pantheon the ancient building was turned into a church named Santa Maria della Rotonda because of its shape. 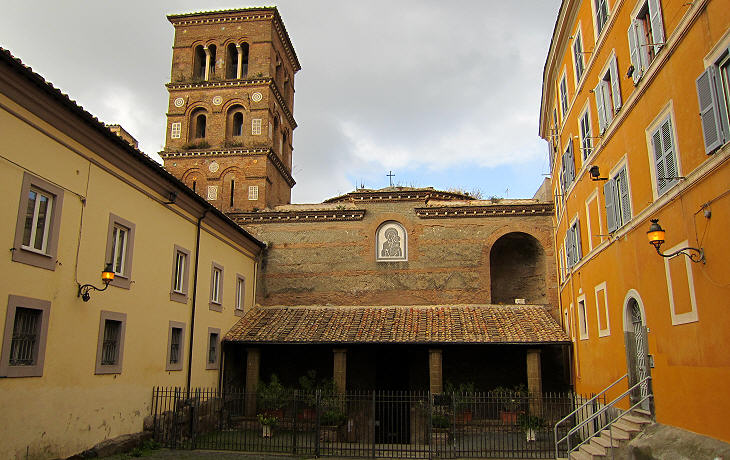 During the Middle Ages Albano was abandoned and only in the XIIth century it became important again for its strategic location along Via Appia. It became a fiefdom of the Savelli family, traditionally one of the four most noble Roman families (the other three are Colonna, Orsini and Conti di Segni). In 1436 Cardinal Giovanni Maria Vitelleschi destroyed Albano because the Savelli were leading a revolt against the authority of Pope Eugenius IV. In 1448, after the death of the Pope, the Savelli regained possession of the town. 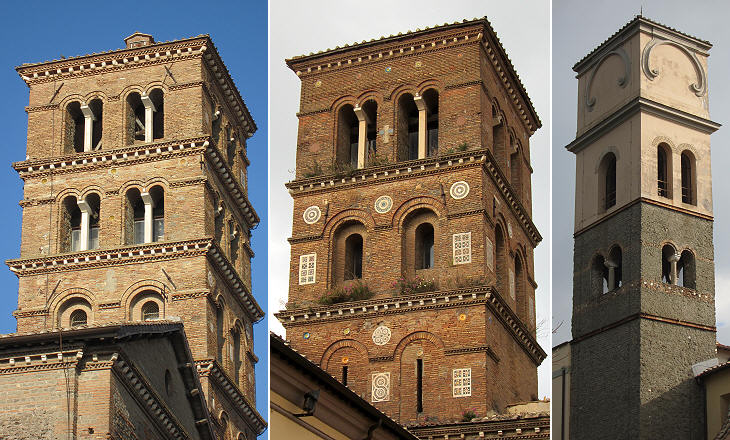 The Romanesque bell towers of Albano are the main monuments of its medieval period because the adjoining churches were rebuilt or largely modified in the XVIIIth century. They are similar to those built in Rome during the same period and show evidence of Cosmati mosaics. 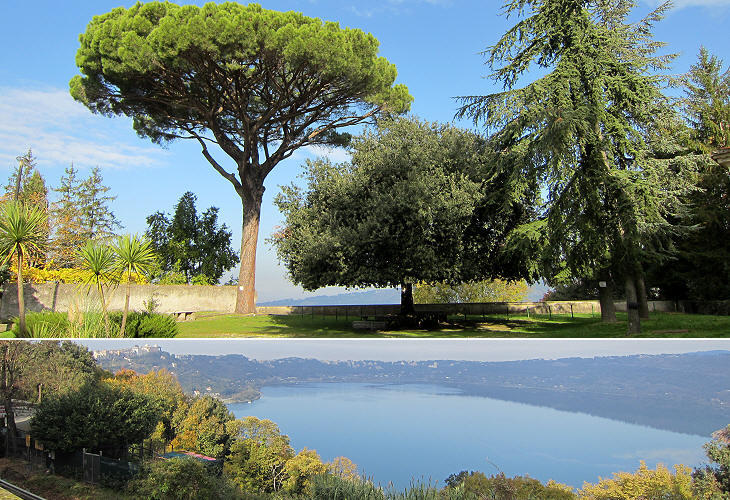 Convento dei Cappuccini: (above) terrace behind the Capuchin monastery; (below) view over the lake; the town in the upper left corner is Castelgandolfo

In 1619 the Savelli decided to pay for the construction of a Capuchin monastery; the site chosen was on the edge of the ridge surrounding Lake Albano; from the terrace in front of their new church the Capuchins enjoyed a view over Albano and from the garden behind the building they could see the lake. 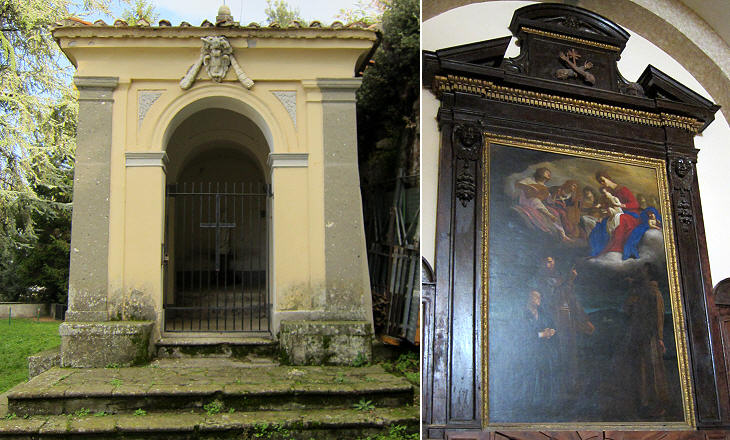 A few years later a small chapel was built in the garden, probably at the initiative of Cardinal Antonio Barberini the Elder, brother of Pope Urban VIII. The Capuchins had strict rules which prevented them from decorating their churches with marbles and works of art, but the painting on the main altar is a fine work by Gerrit van Honthorst, a Flemish painter who spent some years in Rome where he was called Gherardo delle Notti, because of the nocturnal backgrounds of many of his paintings, one of which is in the Capuchin church of Rome. 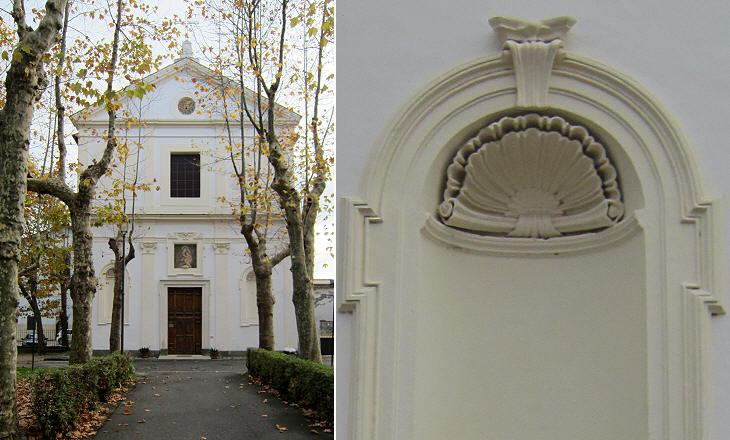 S. Maria della Stella is located along the old road which led to Ariccia; it was built in the XVIth century, but it was largely restored at the end of the XVIIth century when it was decorated with fine stuccoes (the double shell of the niche resembles that designed by Francesco Borromini in S. Carlo alle Quattro Fontane). The piety shown by the Savelli by building churches and monasteries was partly due to the fact that almost constantly they had a cardinal in the family (Silvio was appointed in 1596, Giulio in 1615, Fabrizio in 1647 and Paolo in 1664). 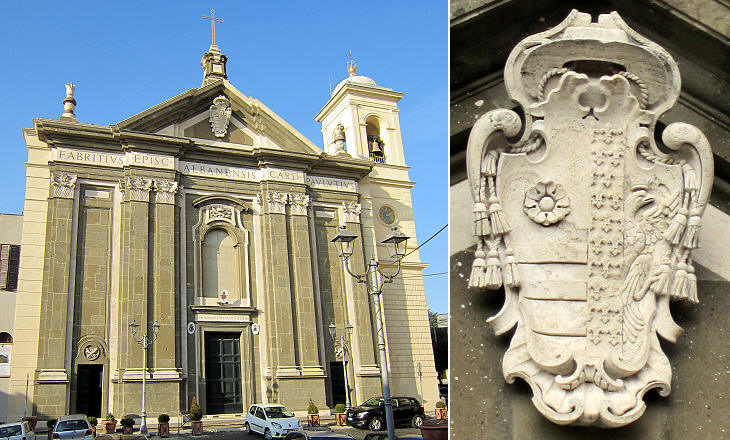 Cathedral: (left) façade by Carlo Buratti; (right) coat of arms of Cardinal Fabrizio Paolucci; the decorative use of dark volcanic stone can be noticed also in the Cathedral of Frascati

In 1697 Albano was acquired by the Camera Apostolica and it became a direct possession of the Papal State. In 1719 Cardinal Fabrizio Paolucci became bishop of Albano, a suburbicarian diocese; this meant he was one of the most senior cardinals; in the conclaves of 1721 and 1723 he was about to become pope, but his election was vetoed by Emperor Charles VI of Austria on both occasions. The self-esteem of Cardinal Paolucci may explain why he gave so much evidence to his own name and to his coat of arms when he completed the new façade of the Cathedral of Albano (see a page on inscriptions on Roman churches). 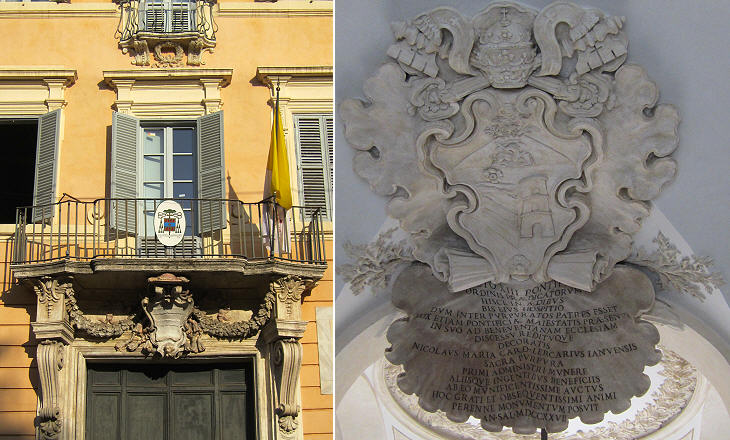 Palazzo Lercari: (left) detail of the façade; (right) coat of arms of Pope Benedict XIII and inscription on the ceiling of the entrance hall

Cardinal Nicolò Maria Lercari was not the bishop of Albano, but he chose to build his family palace there, which he eventually donated as a residence for the bishops. He was very grateful to Pope Benedict XIII who appointed him cardinal and he expressed his feelings by decorating the entrance hall of his palace with an elaborate inscription in which he thanked the Pope. 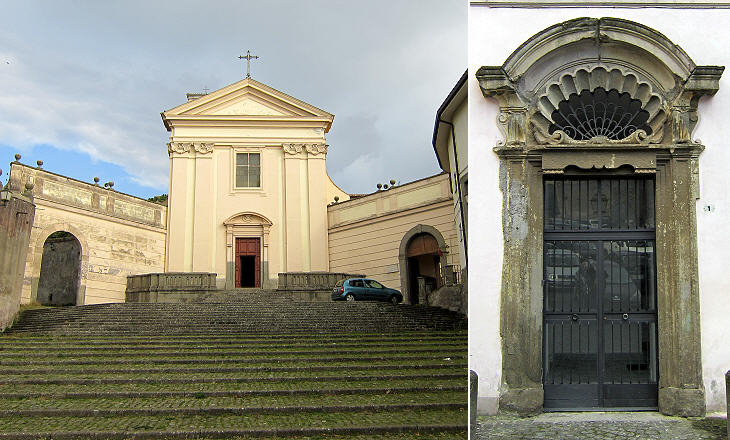 (left) S. Paolo; (right) door of a building opposite the church

The Trident of Rome is the name given to the three streets departing from Piazza del Popolo; it was completed in the late XVIIth century and it influenced the design of new housing developments at Albano and nearby Genzano. At Albano the three streets departed from the old church of S. Paolo which was redesigned; the new buildings were decorated in line with Roman XVIIIth century patterns. 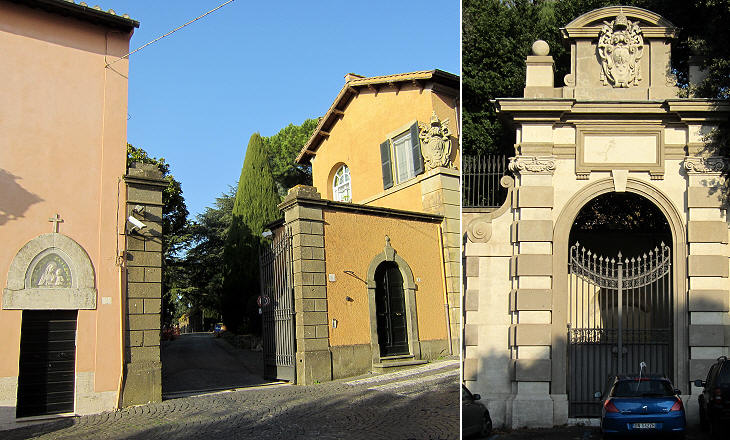 Entrances to the Papal Villa with the coats of arms of Pope Pius XI: (left) from Albano; (right) from Via Appia

In 1929 the Kingdom of Italy and the Holy See reached an agreement to settle the quarrel about the 1870 annexation of the Papal State to Italy. The Papal Palace at Castelgandolfo and a series of other adjoining properties became extraterritorial appendages of the Vatican City State. They cover an area of 55 hectares which is therefore larger than Vatican City. The papal properties are known as Ville Pontificie di Castelgandolfo, but they actually are accessible also from Albano.

Next step in your tour of the Environs of Rome: Castelgandolfo