This page deals with three busts sculpted by Alessandro Algardi most likely in 1638 and portraying Muzio Frangipane and his two sons Lello and Roberto in the family chapel at S. Marcello al Corso. 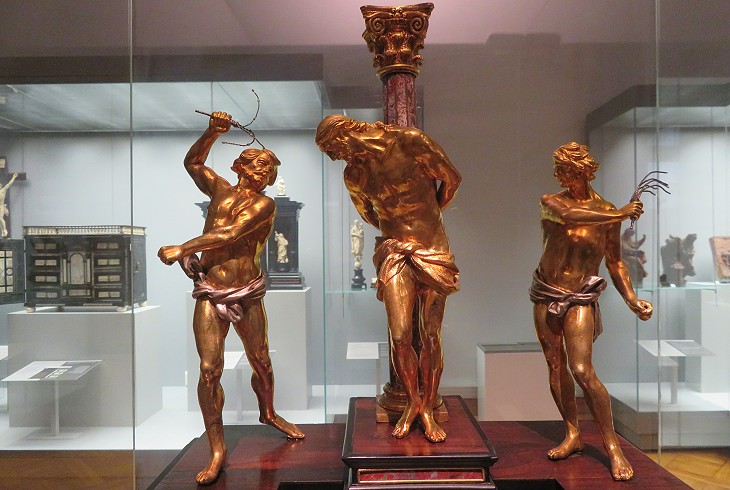 Alessandro Algardi was born in 1595 in Bologna where he studied with Ludovico Carracci. He was called to Rome in 1625 by Cardinal Ludovico Ludovisi for whom he restored many ancient statues. In Rome he befriended Domenichino (also from Bologna), who was the leader of the classical school. He soon became known for the great realism of his busts. He was influenced by Gian Lorenzo Bernini, but he also influenced Bernini.
The Frangipane played a great role in medieval Rome. They fortified Colosseo and turned it into a fortress. In 1268 a Frangipane betrayed Conradin of Swabia who had sought refuge in Torre Astura, a Frangipane castle. A Frangipane led the Roman barons against Cola di Rienzo. In the XVIIth century however their importance in Rome was very much reduced. They owned Nemi, a very small town south of Rome.
S. Marcello al Corso was founded by Marcellus I, who was pope in 308-309. The church was rebuilt several times until a fire in 1519 destroyed it almost completely. Jacopo Sansovino redesigned the church for Leo X and oriented it towards Via Lata which was more commonly called Via del Corso. The church was completed in 1592, but the façade was totally rebuilt in 1686-1708 by Carlo Fontana. 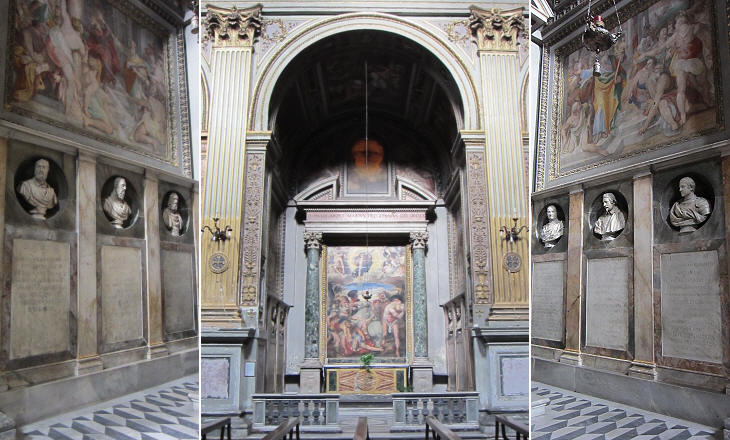 The Frangipane chapel is on the left side, facing south and thus generally receiving a lot of light. The Frangipane had a military tradition and maybe this explains why the chapel is dedicated to St. Paul.
The decoration of the chapel was entrusted in 1558 to Taddeo Zuccari, who worked on it until his death in 1566 (at the same time he was working also at Palazzo Farnese di Caprarola). 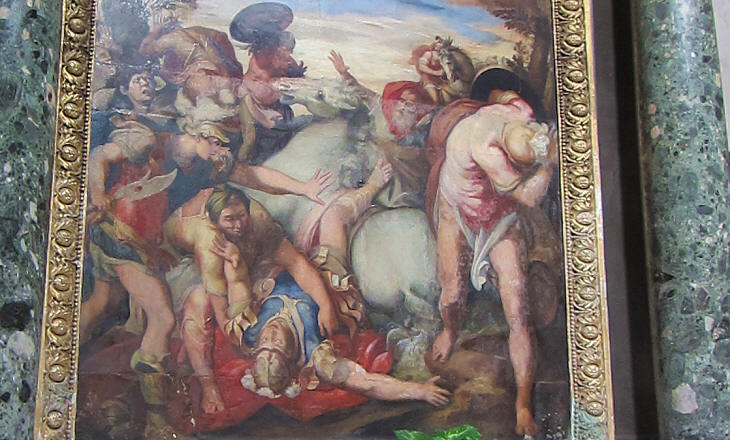 Detail of Conversion of St. Paul by Taddeo Zuccari (1558 ca.)

The Conversion of St. Paul by Taddeo Zuccari is painted on slate (that's why it shines) and it is a very fine example of Mannerist painting. The subject is a dramatic one, but the attention of the viewer is caught by the use of colour and by the tall and elegant figure of St. Paul. You may wish to see a detail of the painting in a page dealing with feet and sandals. Monuments to Mario, Curzio and Antonino Frangipane by an unknown sculptor (1570 ca.)

On the left wall of the chapel one sees the monuments to three members of the Frangipane family, Antonino and his two sons Mario and Curzio. The author of these busts is unknown: the dead are portrayed in a very dignified manner, but they look very much alike. In addition the busts look in different directions and the viewer has to shift position to see each of them properly. 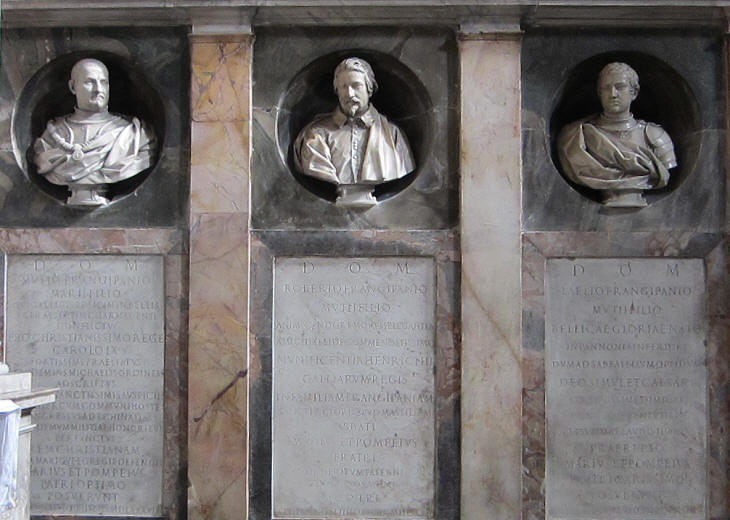 Algardi's genius for the sober representation of character has always been admired. (..) For solidity and seriousness his portraits are unequalled; the mere bulk of any of his early busts brings the sitter physiologically close to us.
Rudolf Wittkower - Art and Architecture in Italy 1600-1750 Penguin Books 1958
On the right wall of the chapel there are three other busts of the same size and inserted in the same marble frame, but the viewer is immediately struck by the fact that he sees three different persons and that the three busts are looking at him. Muzio and his sons Roberto and Lello were all dead when Alessandro Algardi was commissioned their busts, so either he worked by looking at portraits of them or he felt free to represent them as ideal models of a military leader (Muzio), a man of culture (Roberto), a young hero (Lello).

Muzio Frangipane fought for Charles IX of France and he received the Order of St. Michael, the highest chivalric French order, for his military achievements. Algardi shows a determined man who looks in front of him with assurance. Algardi was famous for his ability to represent details which usually were believed to be outside the scope of sculpture. In this bust he shows that Muzio did not shave the lower part of his face every day.

Roberto Frangipane was an advisor to King Henry III, younger brother of Charles IX. He was an abbè and as such he was entitled to wear ecclesiastical dress, without necessarily having official ecclesiastical duties. Algardi did not make use of different marbles, nevertheless the hair and the moustaches of Roberto seem of a different color. The portrait shows some distinctive features of a XVIIth century gentleman like the short moustaches and the pointed beard or the somewhat ruffled hair.

Lello Frangipane died in 1600 at the age of 26 in Pannonia Inferior, an ancient Roman province corresponding to today's Croatia. He was sent there by Pope Clement VIII to support the Habsburgs in containing an Ottoman attack. In the bust he is shown wearing a fine XVIth century armour similar to that shown in the portrait of Cosimo I de' Medici, Duke of Florence, by Angelo Bronzino. 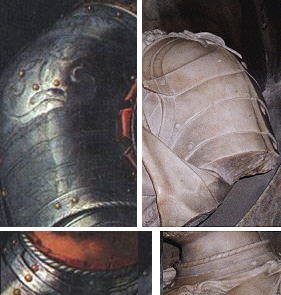 According to the inscription (Bellicae Gloriae Nato) he was born to military glory, but Algardi gave him the sombre and stupefied look of the youth who does not expect to die.
Gian Lorenzo Bernini used to portray his sitters in the act of talking; Algardi, more in line with the recommendations of Accademia di S. Luca, thought better to portray them with their mouth shut, but that does not mean that he did not want his busts to speak to the viewer!

Other pages dealing with Baroque sculpture:
Statues in the act of praying
Representation of Death in Baroque sculptures
Monuments showing the dead in a medallion
Three chapels by Gian Lorenzo Bernini
Bernini's Exiled Statue
Baroque Angels
Baroque Monuments to the Popes
Baroque High Reliefs
Statues Close to Heaven
Embittered Andrew (the statues in the Octagon of S. Pietro)
Laughing Masks
The Last Baroque Tomb
Playing with Colours
A Directory of Baroque Sculpture