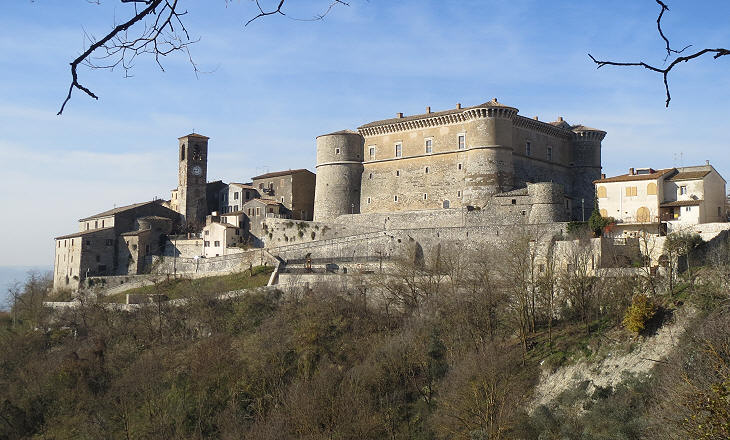 Alviano was founded in the Xth century, but its current aspect is the result of its reconstruction at the beginning of the XVIth century after it had been ravaged by the inhabitants of Amelia during the pontificate of Pope Alexander VI. 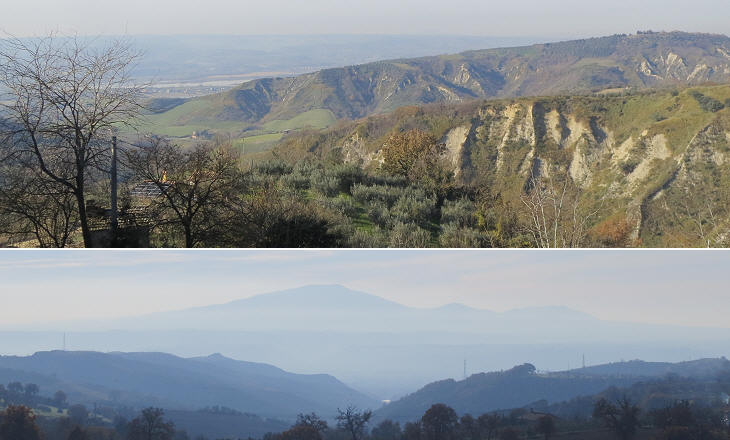 (above) View towards the River Tiber valley and beyond it the region around Bagnoregio; (below) view southwards showing Mount Cimino in the distance

Alviano enjoys a commanding view over the River Tiber valley. The volcanic soil where it stands is very similar to that of northern Latium. Small streams have deeply indented the hills in the proximity of the Tiber. The town can be accessed only from the east, because it is surrounded by ravines on all the other sides. 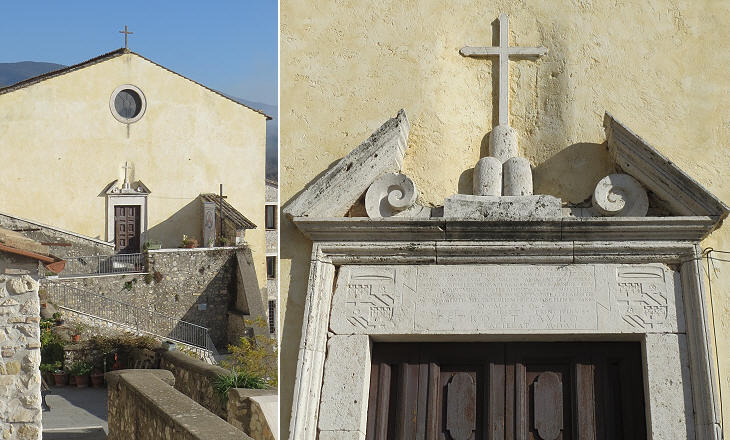 The reconstruction of the town is due to Bartolomeo d'Alviano (1455-1515), a condottiere (commander of mercenary troops) who fought for King Ferdinand (II of Aragon and III of Naples), for the Republic of Venice and for King Francis I of France. He had very few opportunities to live at Alviano, but he hoped to make it the capital of a small independent state. 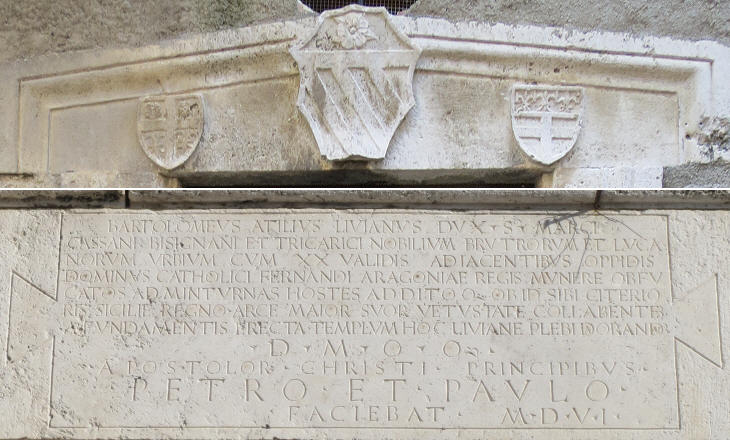 (above) Coats of arms of the Orsini (centre) and the d'Alviano (right) on a small palace in the town; (below) SS. Pietro e Paolo: 1506 long inscription listing the main campaigns of Bartolomeo d'Alviano when he was in the service of King Ferdinand

Young Bartolomeo was sent by his father to Bracciano where he was a page to Napoleone and Virginio Orsini and where he began his military career. He eventually married a niece of Napoleone Orsini and his initial campaigns as condottiere were at the side of the Orsini. In 1503 the Orsini, who usually supported France, switched side and helped Ferdinand of Aragon in conquering Naples. Bartolomeo d'Alviano played a major role in a decisive battle. 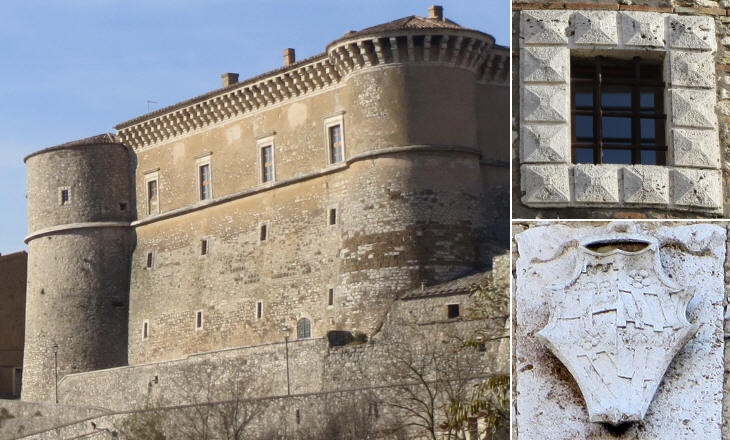 (left) Southern side of the castle; (right-above) decoration of a small window in one of the towers; (right-below) coat of arms of Bartolomeo d'Alviano on the north-eastern tower

At Bracciano Bartolomeo d'Alviano had the opportunity to be involved in the construction of the castle and that which he built in his hometown is very similar to it. The military aspect of the building was in part lessened in the XVIIth century when a roof replaced the battlements. The image used as background for this page shows a detail of the cornice of a tower. 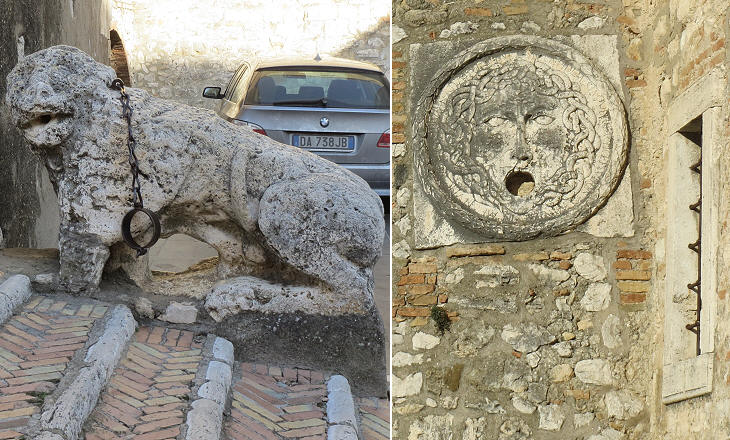 (left) Ancient statue of a lion at the entrance to the castle; (right) ancient relief depicting a Gorgon on the north-western tower

The castle was embellished with some ancient statues/reliefs found in the area. Bartolomeo d'Alviano was not just a man of arms. In 1509, when he was fighting for the Republic of Venice against the League of Cambrai, he was taken prisoner by the French and he was not released until the Republic joined France in a war against Spain in 1513. During the four years he spent in prison, Bartolomeo d'Alviano wrote military treatises, a biography and poems. He played a major role in Francis I's victory at the Battle of Marignano which gave the French king the temporary possession of the Duchy of Milan. 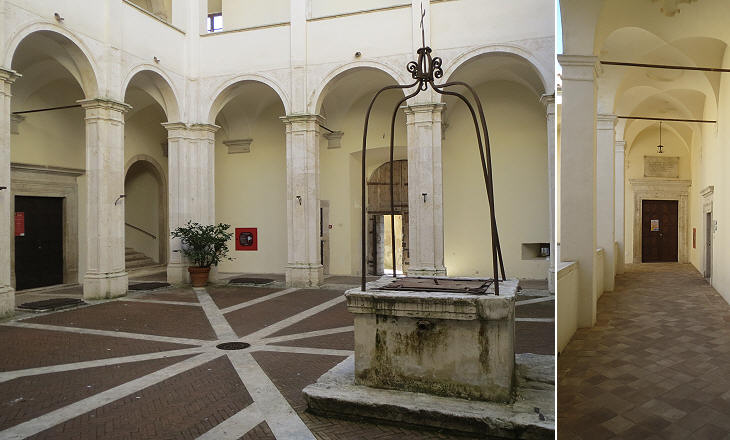 Interior of the castle

In 1537 the last of the Alviano died and the fiefdom was brought under the direct control of the Papal State. The castle lost its military importance and its interior was turned into a palace. Major changes were introduced when the property was acquired by the Pamphilj in 1654 and in particular by Olimpia Maidalchini, sister-in-law of Pope Innocent X. 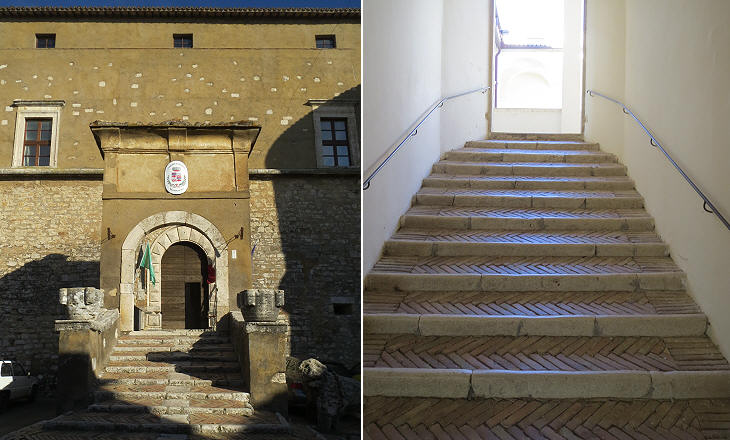 It is most likely that the changes made to facilitate the access to the upper storey were requested by Olimpia, similar to what she had done at her palace in S. Martino al Cimino, a location not very far from Alviano.