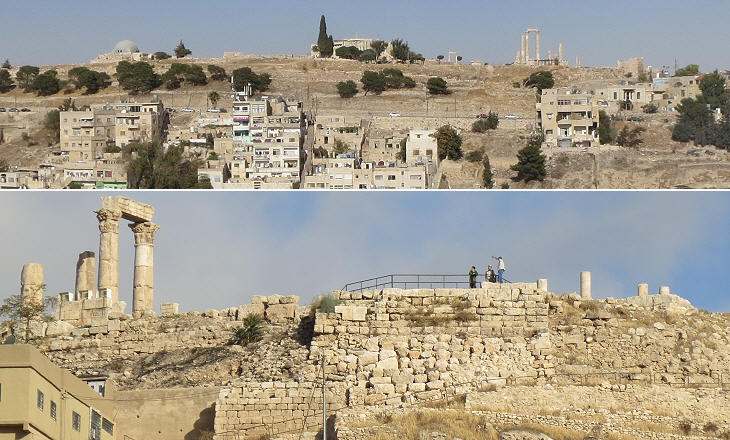 (above) Overall view of the Citadel; (below) a section of its walls

On the top of the highest of the northern hills stands the castle of Amman, a very extensive building; it was an oblong square, filled with buildings, of which, about as much remains as there does of the private dwellings in the lower town. The castle walls are thick, and denote a remote antiquity: large blocks of stone are piled up without cement, and still hold together as well as if they had been recently placed; the greater part of the wall is entire, it is placed a little below the crest of the hill, and appears not to have risen much above the level of its summit.
J. L. Burckhardt - Travels in Syria and the Holy Land - 1822 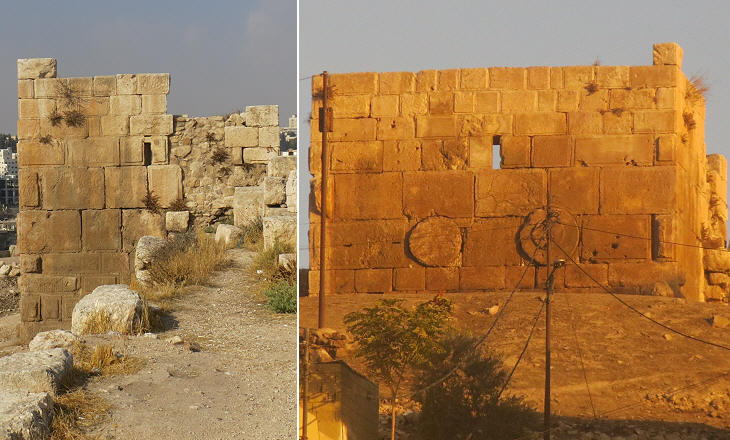 At (m) is a square building, in complete preservation, constructed in the same manner as the castle wall; it is without ornaments, and the only opening into it is a low door, over which was an inscription now defaced.
Similar to other towns of Jordan, Amman was abandoned at the end of the VIIIth century. The tower on the west side of the Citadel was built with ancient materials most likely in the XIIth century, at the same time as Ajlun Castle, as a measure of defence against attacks by the Crusaders. 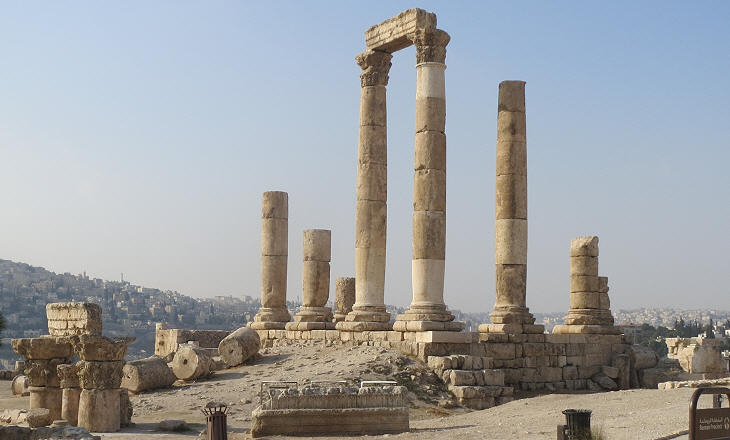 Temple to Hercules (large temple - n in the plan)

Near this building are the traces of a large temple (n); several of its broken columns are lying on the ground; they are the largest I saw at Amman, some of them being three feet and a half in diameter; their capitals are of the Corinthian order.
Some columns have been re-erected to give a better idea of the size of the temple. 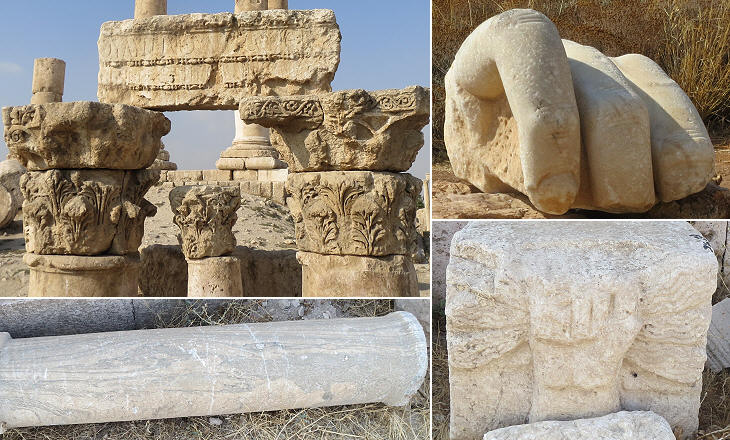 Temple to Hercules: (left-above) Corinthian capitals supporting a dedicatory inscription to Emperor Marcus Aurelius; (left-below) a "cipollino" column at the side of the temple; (right-above) fragment of a colossal statue believed to portray Hercules; (right-below) relief portraying a hand holding thunderbolts, usually a symbol of Zeus/Jupiter

The temple is believed to have housed a gigantic statue of Hercules of which two fragments have been found: a knee and a hand. Hercules was usually portrayed while being involved in some of his labours, especially in sarcophagi, but some statues show him in a more composed attitude, e.g. a gilded statue from Teatro di Pompeo in Rome. In that statue the hand of Hercules is very similar to the fragment found at Amman. A church having the shape of a basilica with three naves was built in the VIth century very near the Temple to Hercules, most likely using some of its columns. 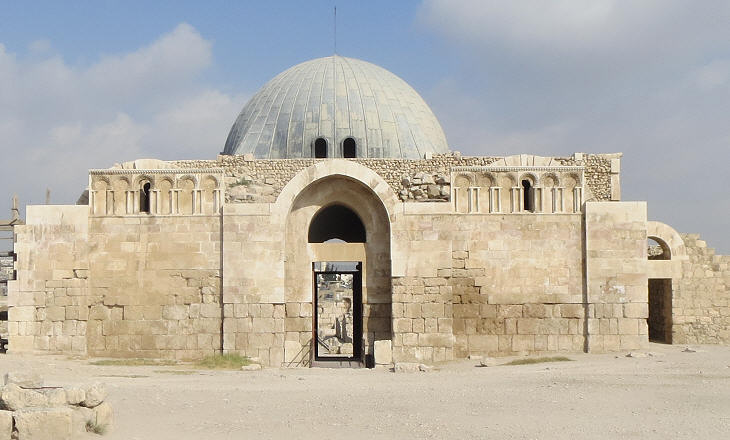 Umayyad Palace (the dome is modern); see a detail of it in the introductory page

In twenty years (632-651) the Arabs conquered a very large territory stretching from Egypt to Persia, but in 656 they split into three factions. The civil war ended with the establishment of the Umayyad Caliphate having its capital at Damascus. The Umayyads had a tolerant policy towards the Christian population and assigned important positions to members of the Byzantine elite. The palace they built in the Citadel of Amman is an indication that the town was still important during their rule. 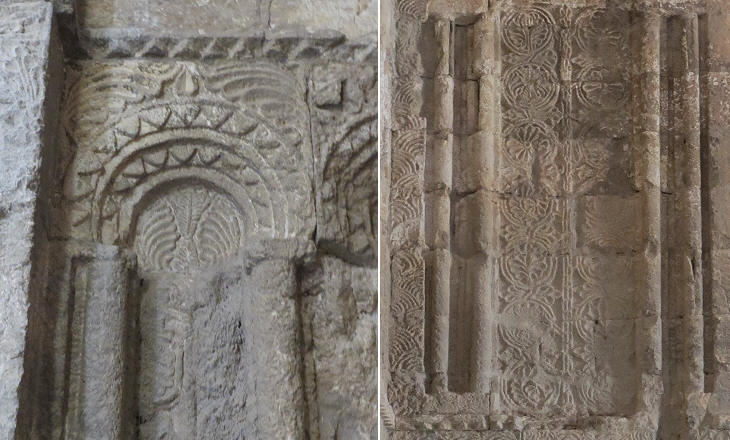 Umayyad Palace: details of its decoration which is regarded as a bridge between Byzantine and Islamic art

In 750 the Umayyads were ousted by the Abbasids who moved the capital of the Caliphate to Baghdad. The move of the centre of power away from Syria and a major earthquake which struck Jordan in 747 or 749 caused the final decline of Amman. 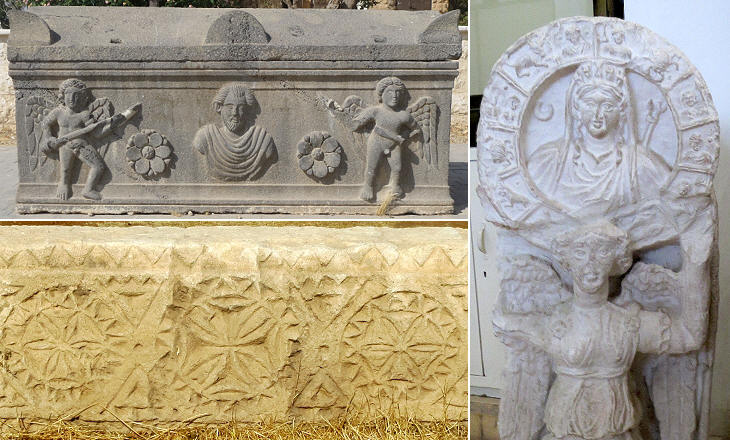 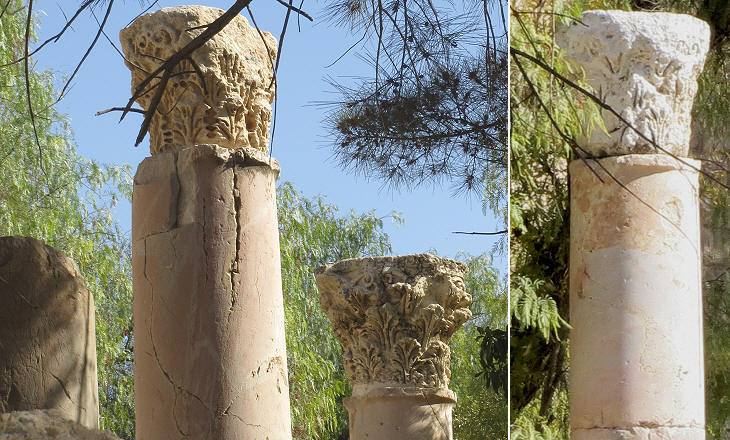 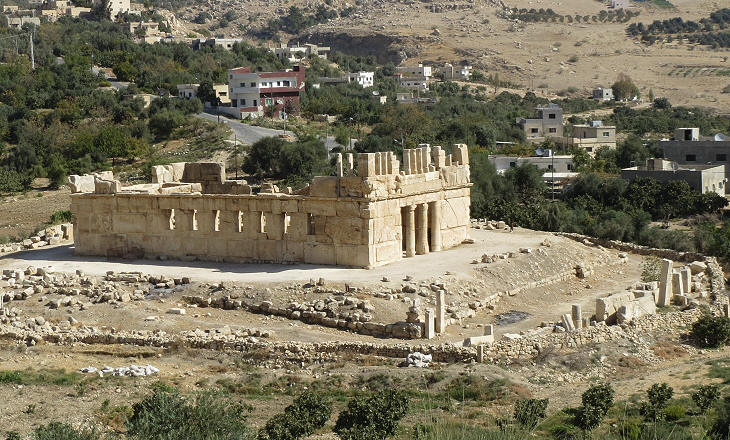 The partition of the empire conquered by Alexander the Great among his generals was not a peaceful one. The Seleucids (the dynasty founded by Seleucus and based in Syria and today's Turkey) and the Ptolemies (the dynasty founded by Ptolemy and based in Egypt) fought six wars to establish who was to rule over Palestine, Jordan and Lebanon. In the IInd century BC the Ptolemies were in control of Jordan and their governor (Hyrcanus, according to Flavius Josephus) built a palace ten miles west of Amman in a location which apparently does not seem the most appropriate one, because it is surrounded on all sides by higher ground. 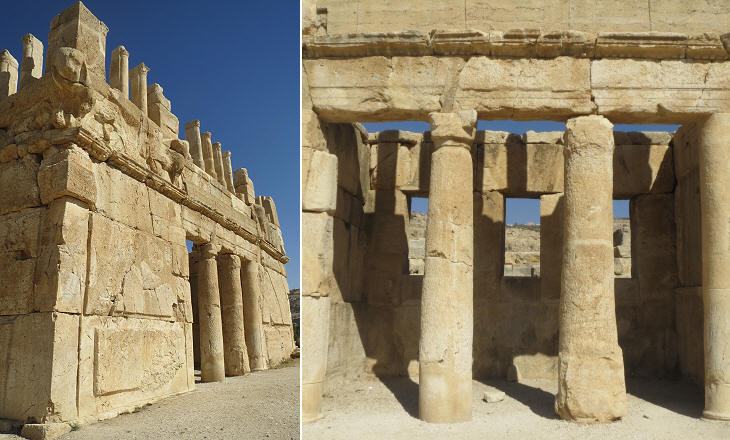 Qasr al-Abd (Palace of the Servant) is the current name of the palace which most likely was never finished. According to a popular tale it was built by a servant during the absence of his master: he was not able to complete it because of the return of the latter. It had an upper storey with rooms whereas the ground floor was used for stables and warehouses. 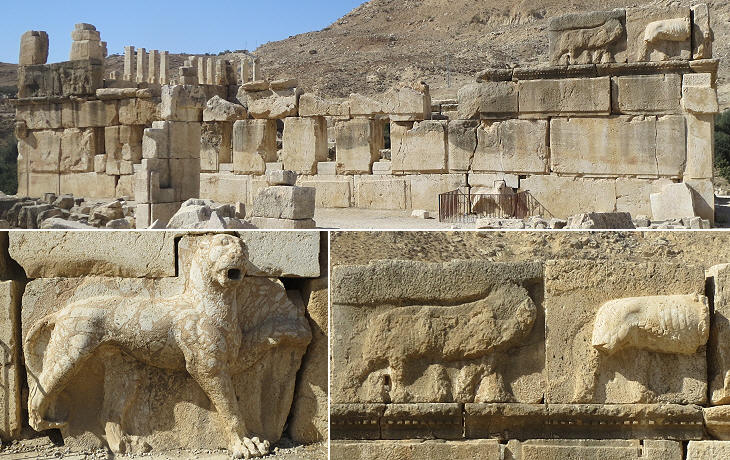 Hyrcanus (..) seated himself beyond Jordan, and was at perpetual war with the Arabians, and slew many of them, and took many of them captives. He also erected a strong castle, and built it entirely of white stone to the very roof, and had animals of a prodigious magnitude engraved upon it.
Flavius Josephus - The Antiquities of the Jews - Book XII - Chapter IV - translation by William Whiston
The most extraordinary feature of the palace is its decoration with reliefs portraying wild beasts, mainly lions. Processions of beasts were a decoration typical of Babylonian art. The lions at the corners of the building had one head, but two bodies. Because they are badly damaged you might wish to see those supporting the obelisk of Piazza S. Pietro in Rome. Iraq al-Amir: relief portraying a lioness and its cub According to tradition the Seven Sleepers of Ephesus were seven Christian youth who hid themselves in a cave during the persecution of Emperor Decius (249-251). There they fell asleep and they woke up some two hundred years later when the Roman Empire had adopted the Christian faith as its sole religion.
This miracle is narrated in the Qur'an too and a Roman tomb near Amman is believed to have been the site of the event. A Byzantine church (almost completely lost) was built above the tomb which today is included in a large Muslim complex. 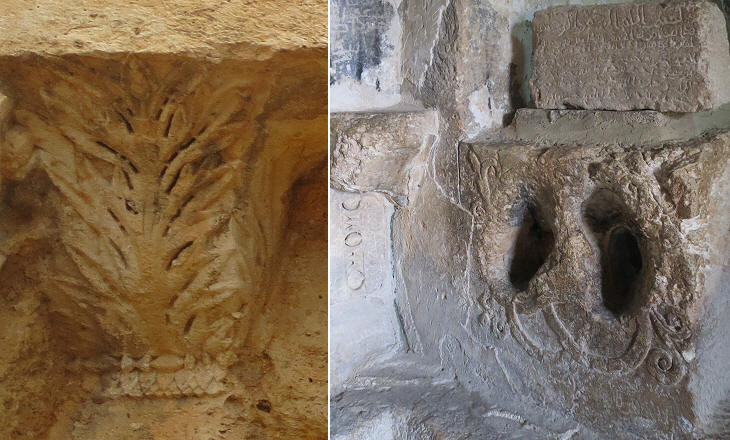 The image used as background for this page shows a relief near the Temple to Hercules.