- Barcelona: Museums
(left - Mosaic at Italica; right - decoration at the Alcazar of Seville)

You may wish to see an introductory page to this section or pages on Roman Barcelona within the walls or outside the walls first. Archaeological Museum of Catalonia at Barcelona: sarcophagi from Barcelona: (above) Sarcophagus of the Lion Hunt; (below) IVth century Christian sarcophagus

Among the Roman antiquities in this city is (..) a beautiful cistern, or rather sarcophagus, which now serves as a watering-trough for mules. They call it the coffin of Pompey's father, and it may as well be his as that of any one else, for we have no proof to the contrary. A large bass-relief runs round it, of hunters, dogs, and wild beasts. The chief person is on horseback, bareheaded, in a military dress. The figures and animals are executed in a masterly style, and the whole is a fine monument of antiquity.
Henry Swinburne - Travels through Spain in the Years 1775 and 1776 in which several monuments of Roman and Moorish architecture are illustrated
The use of ancient sarcophagi as water tanks was very common also in Rome and they can still be seen in the courtyards of many palaces.
In general the ancient sarcophagi of Spain were imported from other locations of the Roman Empire. You may wish to see a sarcophagus depicting a lion hunt in Sicily and some Christian sarcophagi which were found at Tarragona, the capital of the Roman province which included Barcelona. 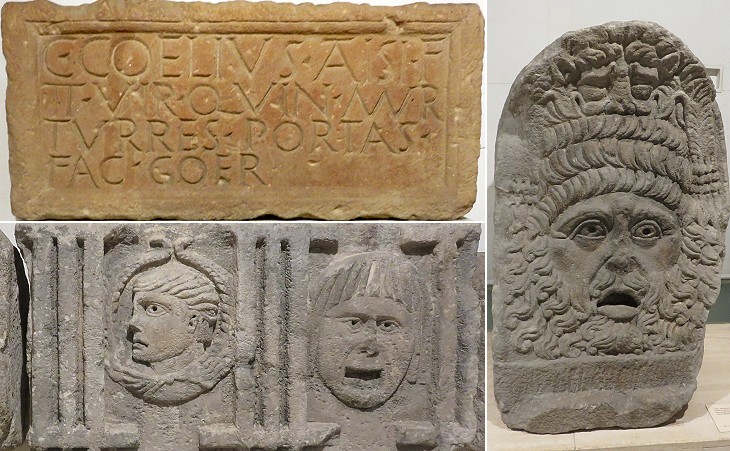 Archaeological Museum of Catalonia: (left-above) inscription celebrating C. Coelius; it does not contain elements which permit its precise dating, but it is believed to have been written in the IInd or Ist century BC; (left-below) frieze depicting theatrical masks which decorated a funerary monument (Ist century AD); (right) mask of Tragedy (see some theatrical masks which were found at the theatre of Ostia)

The inscription was found in 1903 outside the Roman town; it must have been part of a monument celebrating C. Coelius, a duumvir, one of the two officers in charge of the administration of the town, who was appointed for five years and who promoted the construction of the towers, walls and gates of the Roman town which were eventually replaced by those which can still be seen.
Considering the size of Roman Barcelona it is very likely that the town had a theatre, but its location is yet to be identified. Archaeological Museum of Catalonia: Mosaic of the Three Graces (IIIrd/IVth century AD) which was found at Barcelona in 1878

The mosaic of the Three Graces is rather similar to a painting depicting three statues. The way the Graces were portrayed was identical throughout the Roman Empire (see a mosaic at Philippopolis in Syria): they stood with most of their weight on one foot, the central Grace was seen from behind and the other two had a symmetrical pose. It was an ideal subject for the decoration of baths as at Narlikuyu in Turkey. The Three Graces were often portrayed in statues, but these were much more expensive than mosaics (see those at the Museum of Antalya). 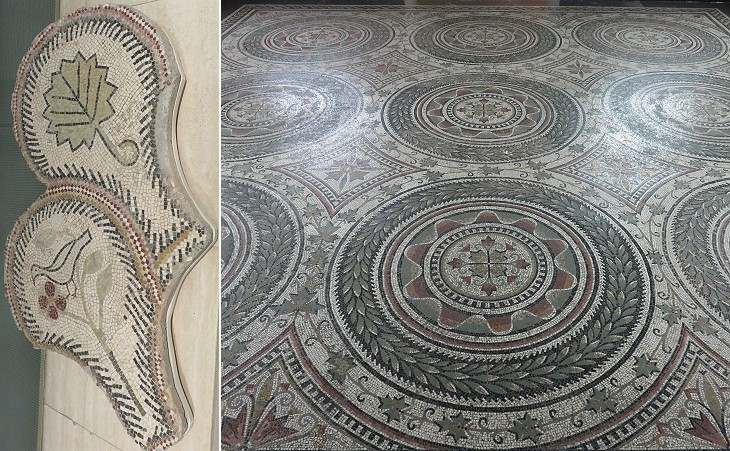 The elaborate geometric mosaic from Villa Cal de Ros de las Cabres is very similar to a mosaic found at Villa Romana de Olmeda because of some three-dimensional illusionistic details.
In Spain, as well as in many other parts of the former Roman Empire, floor mosaics continue to be found because they have withstood the ravages of time owing to the sound technique which was employed in making them. 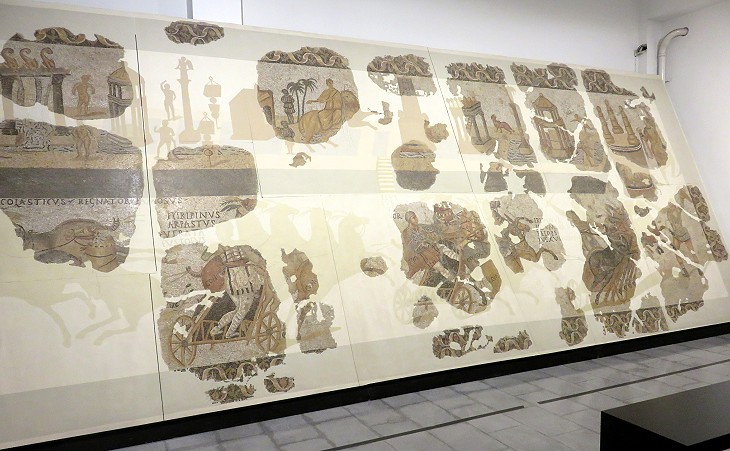 This very large mosaic was found in 1860 in the centre of Roman Barcelona. It depicts a chariot race in the Circus Maximus of Rome. The lower band shows four charioteers, who wear costumes with the colour of the factions (Reds, Blues, Greens and Whites) who supported them; the upper band shows the spina (thorn), the raised area around which the chariots raced, which was embellished by a series of temples and altars. It does not show the full race course as in other mosaics depicting the same subject, e.g. at Villa del Casale in Sicily in the palaestra and in a small room, in a very similar mosaic in the Museum of Girona and at Lyon. 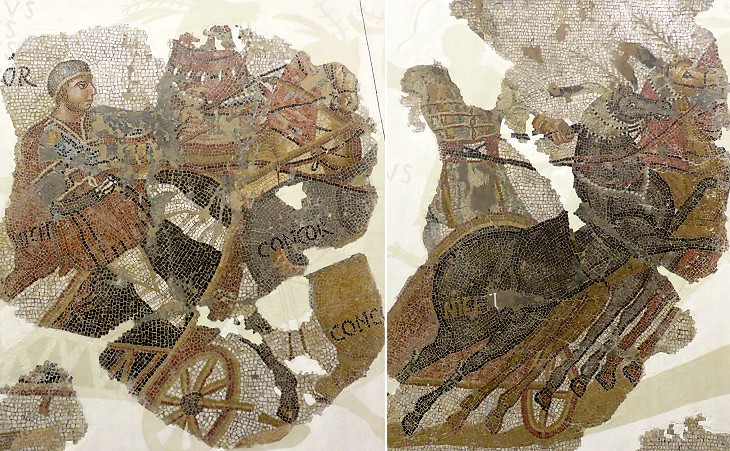 The names of the charioteers and of some of their horses were written in the mosaic, similar to what can be observed in a large mosaic at Merida and in a mosaic at the Museum of Bardo in Tunis. The charioteers were portrayed by a very talented pictor imaginarius, the craftsman in charge of the figurative part of the mosaic. Most likely he was not the same person who worked at the upper band of the mosaic which was poorly designed.
The image used as background for this page shows a geometric detail of the mosaic. 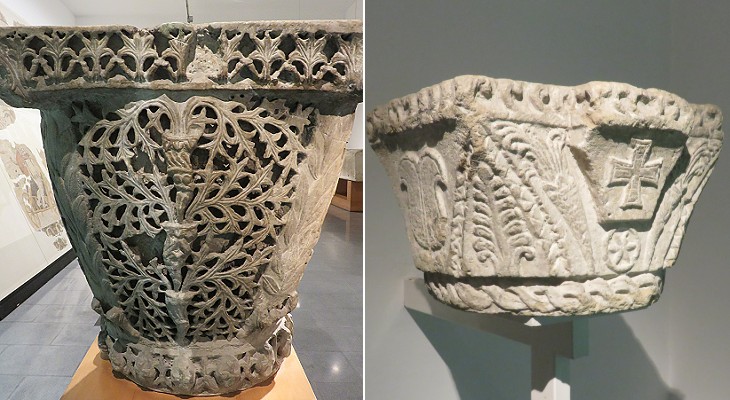 Archaeological Museum of Catalonia: (left) capital from St. Polyeuktos' at Constantinople which resembles one at Hagia Sophia; (right) Visigothic capital

Barcelona retains very limited evidence of the Visigothic rule which lasted from the early Vth century to the early VIIIth century. The museum houses a very fine capital of the VIth century, but it comes from Constantinople. How it arrived at Barcelona is not known; it might have been brought to Sicily after Constantinople was sacked by the Crusaders in 1204 and from there to Barcelona when the island became a possession of the Crown of Aragon. 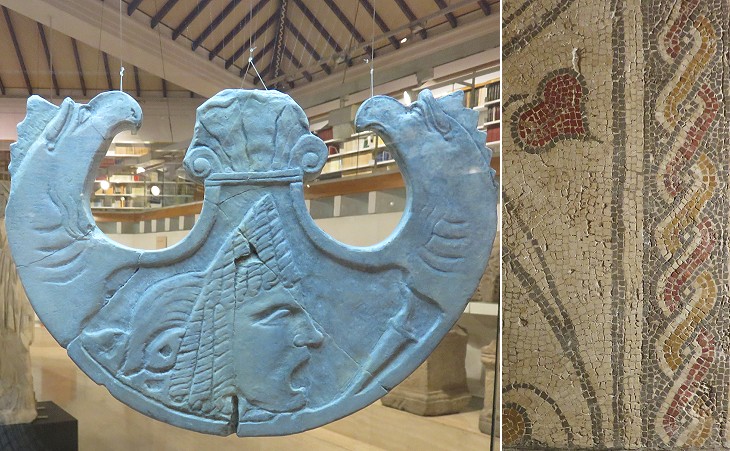 Archaeological Museum of Catalonia: exhibits from "Baetulo" (Badalona): (left) "oscillum" having the shape of a "pelta"; (right) floor mosaic

Baetulo was a Roman town six miles east of Barcelona. The oscillum was found in the garden of a Roman house; the name indicates that it oscillated from the branches of a tree. It is thought it was typical of country festivals, but perhaps in this case it decorated the garden for a party. Oscilla are depicted in a mosaic in the main hall of Villa Romana la Olmeda; other examples of oscilla can be seen at Empuries and on Gozo, a Maltese island. 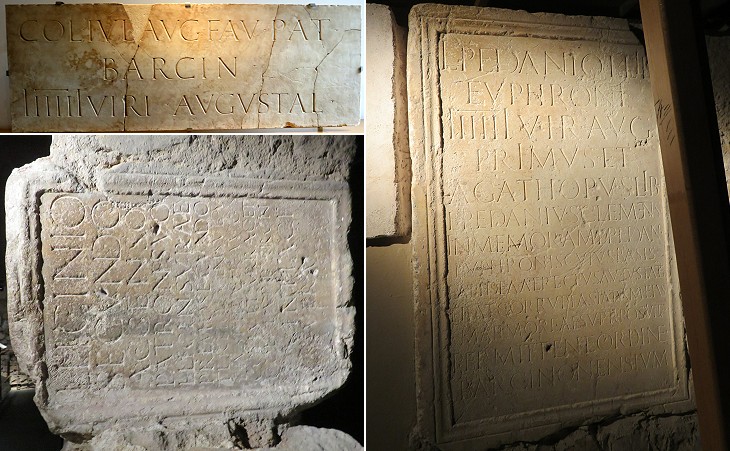 Museum of the City of Barcelona: (left-above) inscription on Carrara marble: (left-below) pedestal of a statue to Lucius Licinius Secundo which was utilized for the construction of the Episcopal Visigothic Palace; (right) inscription celebrating two "Augustales"

A visit to the Archaeological Museum of Catalonia must be complemented with one at the Museum of the City of Barcelona which is located in medieval buildings near the Cathedral and which includes an underground archaeological area. An inscription contains the official name of the town in the early IInd century AD: COL(oniae) IUL(iae) AUG(ustae) FAV(entiae) PAT(ernae) BARCIN(onensium). It was placed by the local Augustales, members of a religious college of freedmen which existed in many Roman towns, e.g. at Herculaneum. Its members were in charge of the ceremonies in honour of the incumbent emperor. Licinius Secundo was a celebrity in Barcelona because he is mentioned in 22 other inscriptions. He was a libertus (freedman) of Lucius Licinius Sura, a close friend of Emperor Trajan. 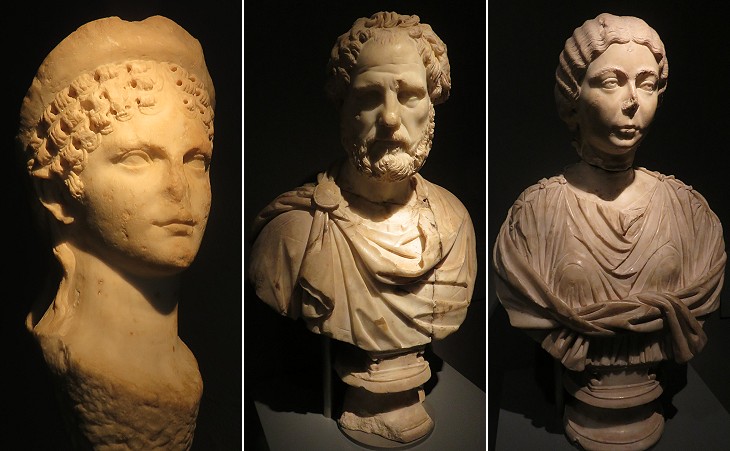 The museum has a small number of finely executed Roman busts some of which have been dated by studying the hair styles of the portrayed personages which varied according to the fashion of the time. 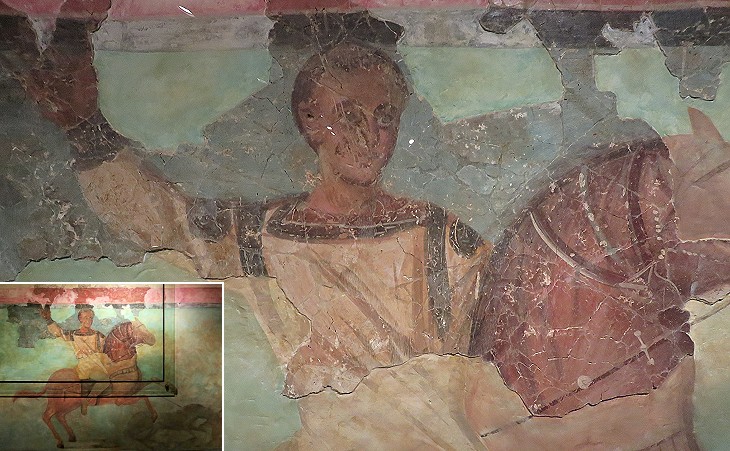 Museum of the City of Barcelona: fragment of a mural painting; (inset) assumed aspect of the whole painting

The original part of the painting has been completed in order to depict a hunting scene, a popular subject which can often be seen on floor mosaics of countryside villas throughout Spain (e.g. at la Olmeda) and other provinces of the Empire (e.g. at il Casale in Sicily). The gesture of the hand of the horseman brings to mind that of a military commander in a famous Roman sarcophagus. 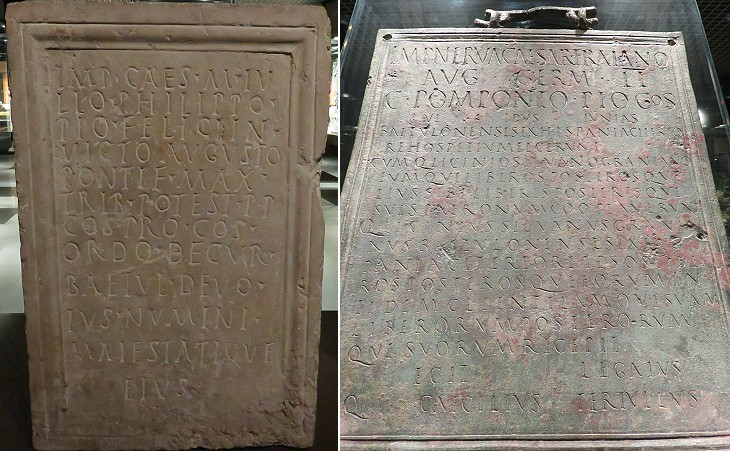 Museum of Badalona: (left) inscription celebrating Emperor Philip the Arab (244-249); (right) "Tabula Hospitalis"; it was found in 1934 and it is dated 98 AD because it mentions the two consuls in charge in that year, i.e. Emperor Trajan and Caius Pomponius Pius

Initially some of the ancient materials which were found at Baetulo were moved to Barcelona, but in 1954 a museum was created above the site where excavations had brought to light parts of the ancient town. The inscription celebrating Emperor Philip was placed by the ordo decurionis, i.e. a sort of local Senate. The quality of the inscription is not very good especially when compared to that of a long bronze inscription of the time of Emperor Trajan. The latter is a pact of friendship between the City of Baetulo and Licinius Silvanus Grania who accepted to be named patron of the town; he was a relative of Lucius Licinius Sura and clearly a wealthy and influential person. Spain houses many interesting bronze inscriptions, maybe because this material was more easily available than good marble, owing to the copper and tin mines of the country (see the inscriptions which were found at Intercatia, Italica and Urso). 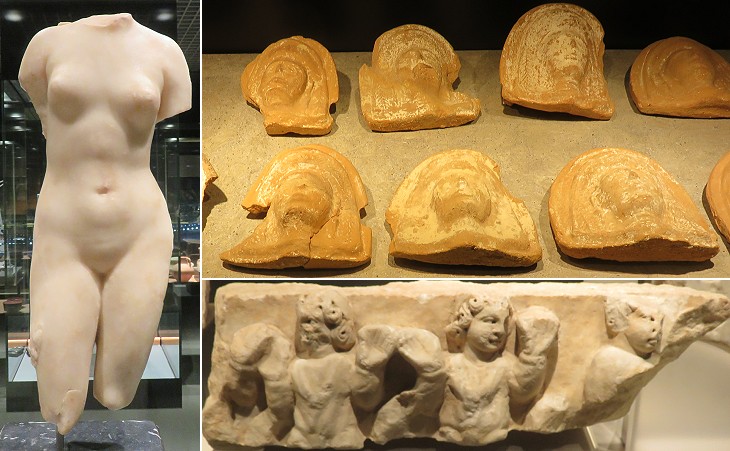 A small marble statue of Venus was found in 1934 at Badalona. It most likely decorated a garden fountain (see a catalogue of Roman garden fountains on the walls of Villa di Poppea near Pompeii) and it was moved to the Archaeological Museum of Catalonia. In 1980 the municipal authorities of Badalona managed to have the statue returned to them. It has since become a symbol of the town. Copies of the Venus are awarded in recognition of cultural activities promoting the image of Badalona. 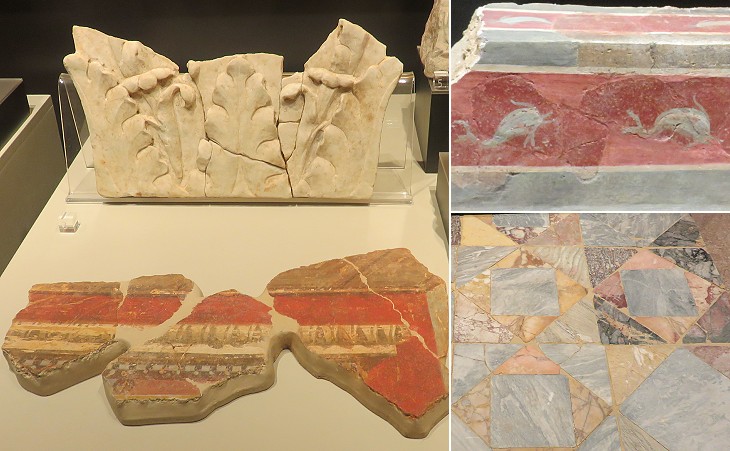 Museum of Badalona: exhibits showing the rich decoration of the houses, including a fine "opus sectile" floor