You may wish to see an introductory page to this section first. The two monuments covered in this page are situated along roads which link Transylvania to Wallachia across the Southern Carpathians. 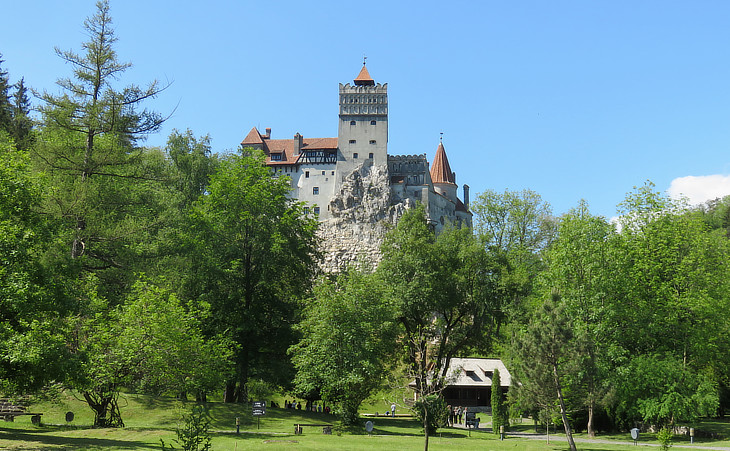 I accompanied our friend to visit the old castle of Terzburg, which is still inhabited and in good preservation. It occupies the point of an isolated rock, of no great height, indeed, but very steep on every side. It is in a singular style, half Byzantine, half Gothic. Its importance in former times was so great, that the Kronstadters received valuable privileges for having built it. At this point begins one of the few practicable passes between Wallachia and Transylvania, and the command of it must often therefore have decided the result of an incursion. Even in the very earliest times, Terzburg seems to have been a chosen point of defence, and it is said to take its German name of Diedrichstein from Theodoric, the chief of the order of German knights, to whom the whole of this district was given by King Andreas, on condition of their defending the frontiers. The many castles, often in ruins, (..) in this portion of the Saxon-land are generally referable to this period; but that of Terzburg, at least as it now stands, has a later origin.
John Paget - Hungary and Transylvania - 1839 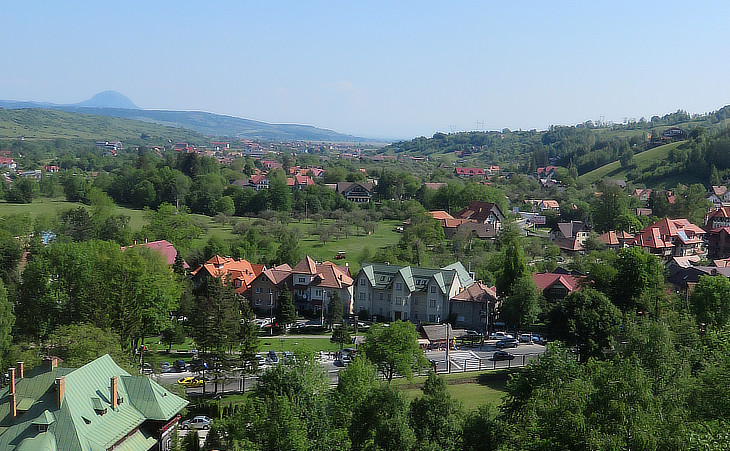 View from the Castle

A short drive from Rosenau brought me to the castle of Terzburg, built on a rock rising just where the mountains on either side slope down and meet as if to barricade the way. Nothing can be more romantic than the fortress; its position among the solitary rocks, its construction and seeming inaccessibility, make it the very ideal of such sort of dwelling. It might have been the abode of some robber knight, or of Blue Beard (*), who from the windows high up over the perpendicular rock saw and defied the knights scouring across the plain riding amain to save their sister's life.
Charles Boner - Transylvania: its products and its people - 1865
(*) Bluebeard is a French folktale, about the story of a wealthy man in the habit of murdering his wives and the attempts of one wife to avoid the fate of her predecessors.
I, by dint of groping, found the outlet from the attic, and proceeded to descend the narrow garret staircase. I lingered in the long passage narrow, low, and dim, with only one little window at the far end, and looking, with its two rows of small black doors all shut, like a corridor in some Bluebeard's castle.
Charlotte Bronte - Jane Eyre - 1847 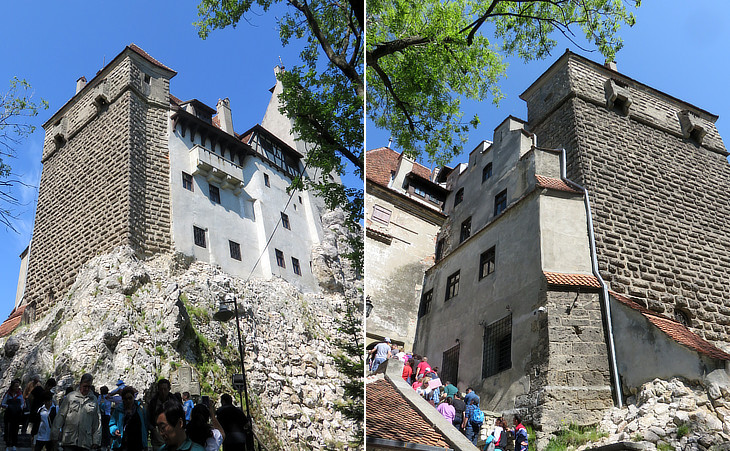 En route to the Castle

We gained the interior of the castle by a small portal, nearly half way up the tower. A fixed wooden stair now leads to this opening, though it was formerly to be reached only by a ladder, which was always drawn up at night. The ancient door, cased in iron, still exists. It is constructed like a drawbridge, and lets down by iron chains, so as to form a landing-place before the entrance. (..) Everything remains in its pristine state, though some of the parts are no longer applied to their original purposes. One strong bastion has been made into a hen-roost, a respectable-looking tower is treated even less respectfully, port-holes serve to trundle mops in, and dishcloths hang where spears were wont to rest. The rooms are small and almost without ornament. On the whole, I was much pleased with Terzburg; for although there is little to describe, there are few old castles which give one a better idea of the times when they were erected, or of the manner of life for which they were adapted, than Terzburg. Paget
A path up the rocks leads to the entrance, which is gained by mounting an outer wooden stair, and crossing a trap-door or draw-bridge in the flooring. Within are narrow passages and galleries, strange nooks and zigzag stairs, and dark corners irresistibly attractive, and in the thick wall was a low prison where no ray could ever enter. Boner 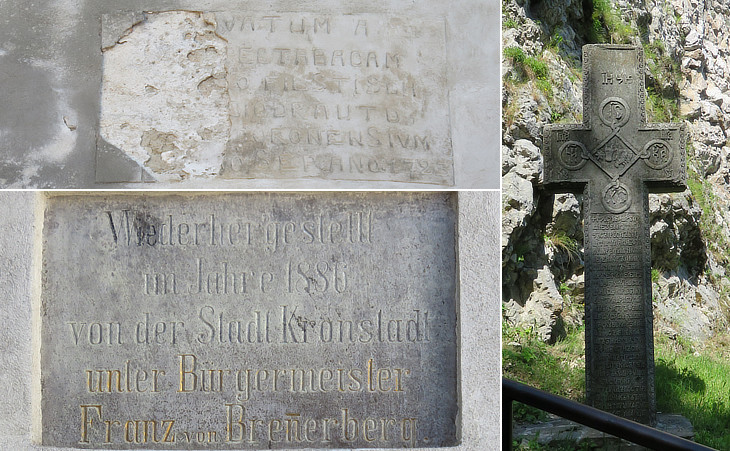 Today Bran is known as the "Castle of Dracula" with reference to:
a) the Voivode of Wallachia Vlad III the Impaler whose family name was Dracul or Draculesti. Vlad sought refuge in the castle after having been defeated by Ottoman Sultan Mehmet II in 1462.
b) Count Dracula (a vampire), an entirely fictional character created by Bram Stoker in a novel he wrote in 1897. The description of Bran by Boner might have suggested the association between the castle and the vampire.
Vlad was universally named the Impaler in consequence of a practice also known as the Bulgarian atrocities. A sharpened pole was forced into the body of the victim, and the other end was then driven into the earth, the unfortunate man, woman, or child being left to writhe in agony until relieved by death. (..) In order to strike terror into Mohammed II. Vlad crossed over into Bulgaria, defeated the Turks, and brought back with him 25,000 prisoners, men, women, and children, whom he is said to have impaled upon a large plain.
James Samuelson - Roumania past and present - 1882
This punishment of impaling is commonly executed amongst the Turks for crimes of the highest degree; and is certainly one of the greatest indignities and barbarities that can be offered to human nature. The execution is done in this manner. They take a post of about the bigness of a man's leg, and eight or nine feet long, and make it very sharp at one end. This they lay upon the back of the criminal, and force him to carry it to the place of execution: imitating herein the old Roman custom, of compelling malefactors to bear their cross. Being arrived at the fatal place, they thrust in the stake at the fundament of the person who is the miserable subject of this doom; and then taking him by the legs, draw on his body upon it, until the point of the stake appears at his shoulders. After this they erect the stake, and fasten it in a hole dug in the ground. The criminal sitting in this posture upon it, remains not only still alive, but also drinks, smokes, and talks, as one perfectly sensible; and thus some have continued for twenty-four hours. But generally after the tortured wretch has remained in this deplorable and ignominious posture an hour or two, some one of the bystanders is permitted to give him a gracious stab to the heart; so putting an end to his inexpressible misery.
Henry Maundrell - A Journey from Aleppo to Jerusalem at Easter - 1697
The shop at the castle sells books on Vlad; the cover of one of them depicts some impaled Turks and it is shown in the image used as background for this page. 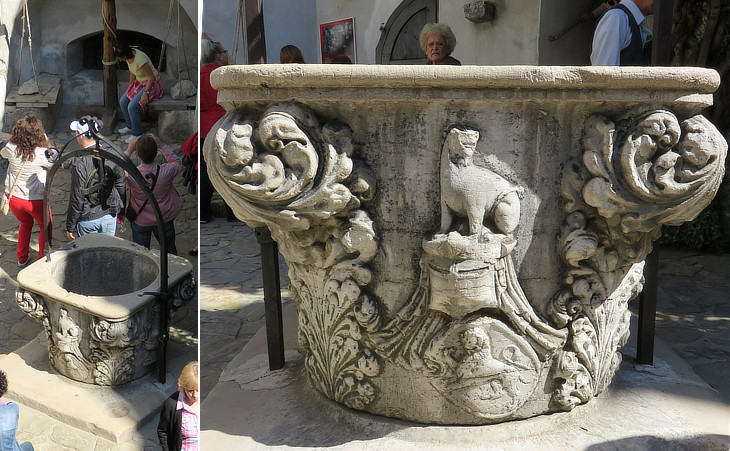 Venetian well-head in the courtyard (see similar ones in Venice)

A little courtyard occupies the centre of the building, and, as usual, it is surrounded by open galleries, communicating with the different apartments. Paget
The castle of Bran was restored and arranged to be used as a residence of the royal family after the citizens of Brasov, through a unanimous decision of the city's council, offered the castle to Queen Maria of Romania in 1920. From 1920 until 1932, the castle was converted into a royal summer residence, coordinated by the Czech architect Karen Liman. Four Venetian well-heads were placed in and next to the castle in this period. On three of the faces of the late fourteen century Gothic well-head standing in the courtyard of the castle are sculpted two different amphoras and one shield surmounted by a helmet with a sitting lion. Cabbage leaves ornament the corners. (..) The shield represents a rampant lion, a widespread motif of coat of arms, on the basis of which it is difficult to identify the origin.
Anna Tuskes - Three Castles - Ten Venetian Well-Heads - 2017
The interior of the castle has entirely lost its past evocativeness. 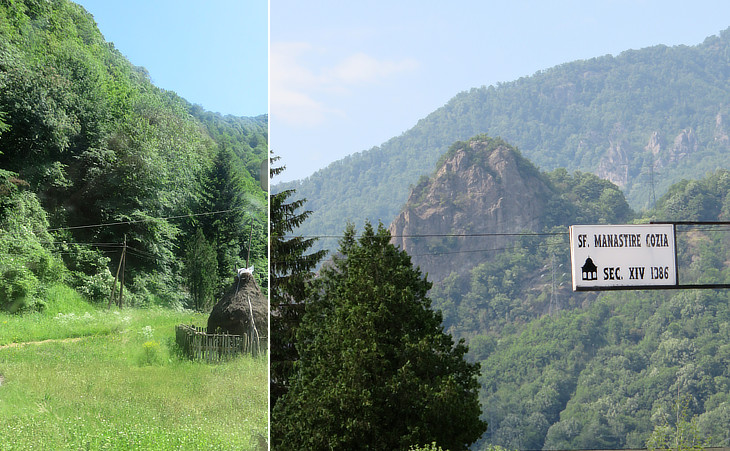 Images of the valley of the River Olt (Aluta in antiquity)

I should recommend all lovers of fine scenery who may visit Hermanstadt (Sibiu), to extend their rambles as far as the Rothen Thurm Pass, one of the most romantic of the valleys which connect Transylvania and Wallachia. (..) The valley is most beautiful, the rocks are bold and precipitous, the woods rich, and hanging over the sides of the mountains, and occasionally the most beautiful green glades intervene, that either poet or painter could desire. It is by this beautiful valley that the Aluta makes its escape to the Danube, and it forms one of the most curious instances I know, of a river passing completely through the centre of a vast mountain chain. At present, the Aluta is of little value; for, in spite of the orders for removal of mills, by the Prince of Wallachia, its course is entirely obstructed by them. Paget 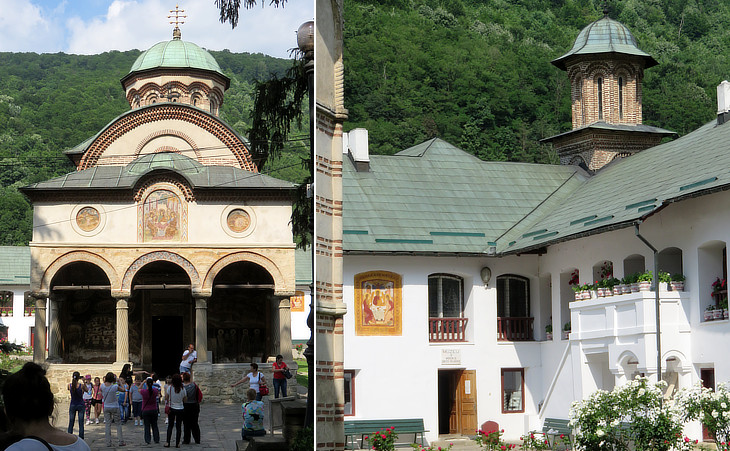 We noticed many beautiful Greek churches and convents. They are all uniform in their architecture having a neat belfry and a front pierced with a pretty arcade or colonnade. I observed many crucifixes. These crucifixes are covered with inscriptions in the Wallachian character and with the most barbarous symbols of the Deity, of the Blessed Virgin, of the Magdalen, St John and other saints.
Charles Colville - Travels to and from Constantinople in 1827 and 1828
Cozia Monastery, one of the oldest and most complex historical monuments of Romania, is situated on the right bank of the river Olt. The church was built in 1386-1388 in Byzantine style with local influences; its design is quite different from those of the monasteries of Moldavia. Constantin Brancoveanu, one of the last Voivode of Wallachia of local origin, built the porch in 1706. 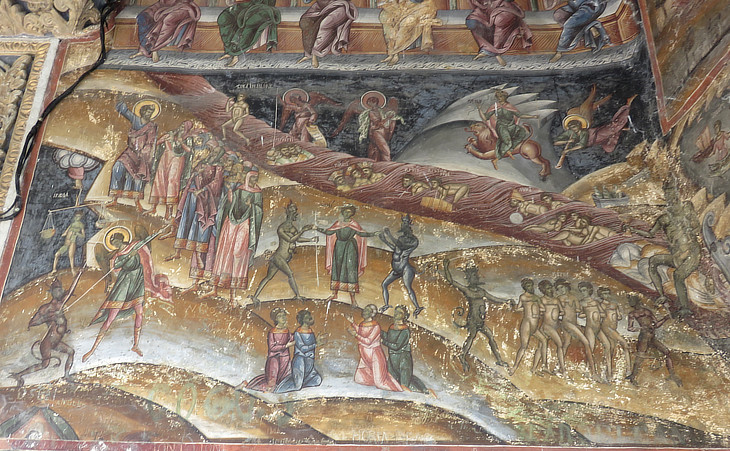 Church: The Last Judgement on the wall next to the entrance; you may wish to compare it with that of Voronet