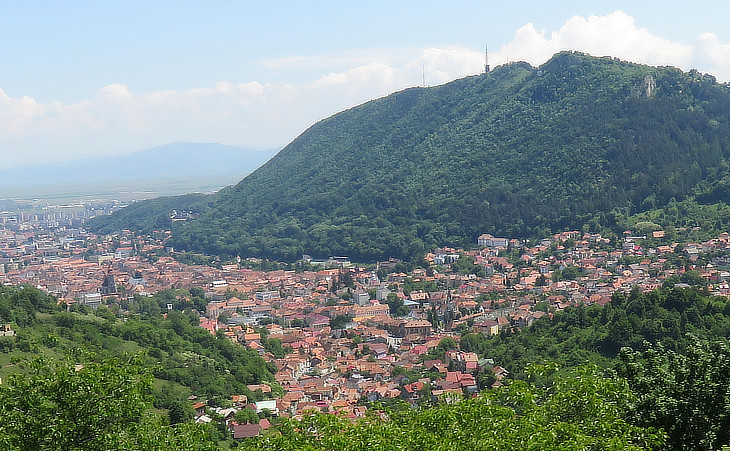 Kronstadt was the object we were now making for, and we had almost entered it before we were aware of its proximity, so completely is it imbedded in the mountains, which bound this plain to the south. (..) The outskirts of the town were occupied by pretty villas, surrounded by well-kept gardens, strongly indicative of commerce, and the wealth and tastes it brings with it.
John Paget - Hungary and Transylvania - 1839
Kronstadt (1940 ft.), Hung. Brasso, Roum. Brasov, with 40,600 inhab., of whom about 8150 are Saxons, is the most important commercial and manufacturing town in Transylvania. It lies in a charming basin, with an opening on one side only towards the Burzen Plain. It consists of four quarters: 1. The Inner Town, the centre of business; 2. The Old Town, or Brasso, the oldest quarter, but now modern and insignificant; 3. Bolonya, Ger. Blumenan, mainly inhabited by manufacturers; 4. The Upper or Roumanian Suburb, resembling a village, chiefly occupied by Roumanians. (..) The Environs afford many pleasant excursions. From the inner town a route ascends through beech-woods to the top of the Zinne (3140 ft.: 1200 ft. above the town), which commands a beautiful view of the town and the Burzen plain.
1911 Baedeker's Guide Book of Austria - Hungary, with excursions to Cetinje, Belgrade and Bucharest. 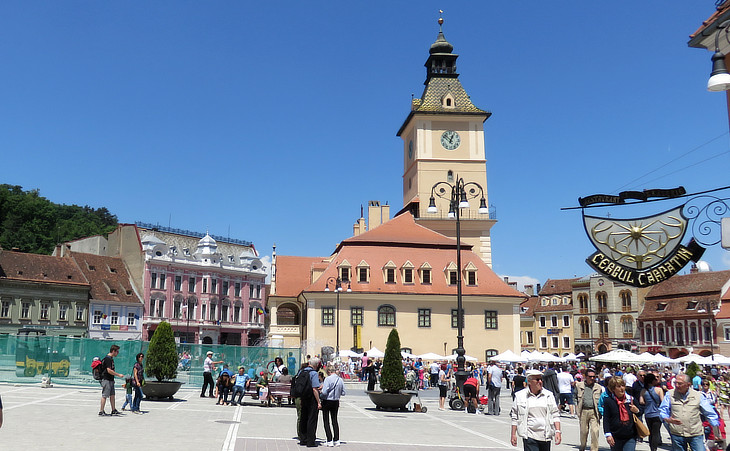 Main Square with Casa Sfatului (Rathaus, Town Hall); the signpost of a restaurant (The Carpathian Deer) is shown in the image used as background for this page

The population of Kronstadt amounts to thirty-six thousand, by far the greatest of any town in Transylvania, and it is composed of as motley a crew as can well be imagined. The sober plodding Saxon is jostled by the light and cunning Greek; the smooth-faced Armenian, the quaker of the East, in his fur cloak, and high kalpak, meets his match at a bargain in the humble-looking Jew; and the dirty Boyar from Jassy (in Moldavia), proud of his wealth and his nobility, meets his equal in pride in the peasant noble of the Szeklerland. Hungarian magnates and Turkish merchants, Wallack shepherds and gipsy vagabonds make up the motley groups which give life and animation to the streets of Kronstadt. (..) The proximity to Turkey, and the frequent intercourse of its inhabitants with this place, have given to Kronstadt something of Turkish habits and manners. The amber mouth-piece, the long chibouque, the odoriferous tobacco, the delicious dolchazza, and the various other sweetmeats of a Turkish confectioner's, the coffee-house in the form of a kiosk, the bazaar, and many other peculiarities, remind the traveller of the customs of the East. Paget
In the centre of the Franz-Joseph-Platz, or principal square (market on Frid.), stands the Rathaus built in 1420 (the tower, 190 ft. high, earlier), and restored in 1777 in the baroque style. The whole building was remodelled in 1909. Baedeker
The main square is still the busy centre of the town, but its cosmopolitan crowd and oriental atmosphere are no longer there. 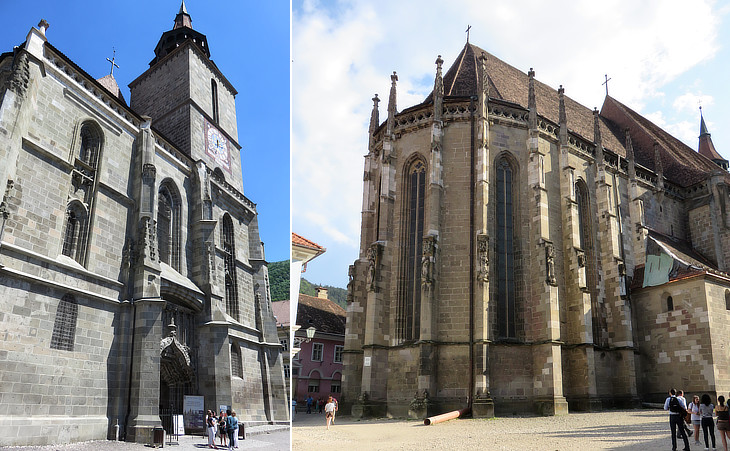 Our first visit was to the old church, a venerable Gothic structure of elegant proportions. Although the church now belongs to the Lutherans, the national religion of the Saxons, its buttresses bear the somewhat time-eaten statues of Catholic saints, each in its separate niche. The interior is bold and pure, though rather simple. Paget
The Protestant Church (Pfarrkirche) in the Honterus-Platz, popularly called the Black Church from its smoke-stained walls, is a Gothic edifice of 1385-1425, with traces of Romanesque influence. Baedeker 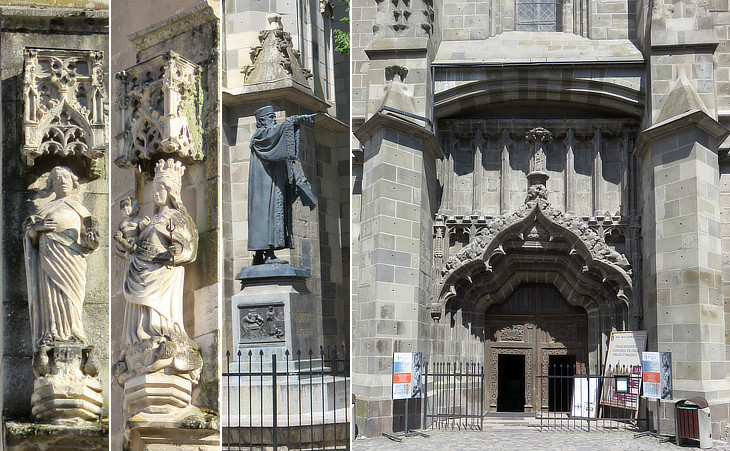 Black Church: details and statue of Johannes Honterus, a Protestant reformer and theologian

The door-ways, rounder than the Gothic arch of that age (1400) with us, are well carved in bold compartments, and rare good taste; the doors themselves are richly worked in the same style. Paget
On the exterior of the choir-wall are statues of the twelve Apostles, once gilded, but now black. Johannes Honterus (1498-1549), the "Apostle of Transylvania", preached in this church. Between the church and the school is a bronze Statue of Honterus, by H. Magnussen (1898). Baedeker 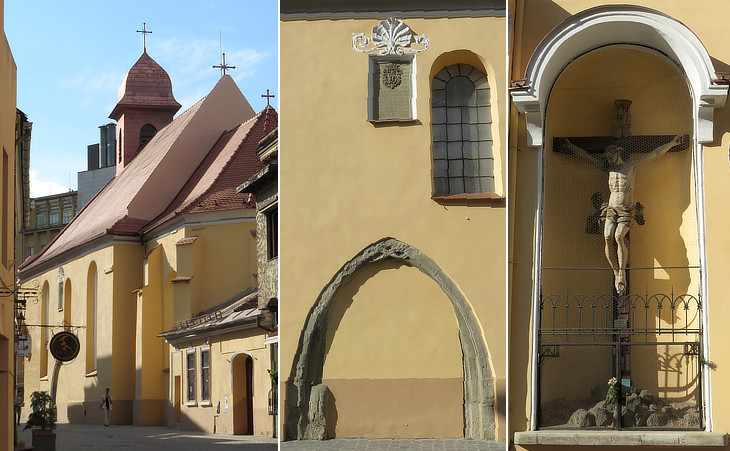 Franciscan Convent and details of its church

The church is a Gothic building (ca 1450), which was restored and redesigned in the XVIIIth century after Kronstadt and Transylvania had become Austrian possessions. The Emperors promoted the recatholization of the town and of the region, but they did not impose it. The Franciscans inaugurated the new church in 1725. 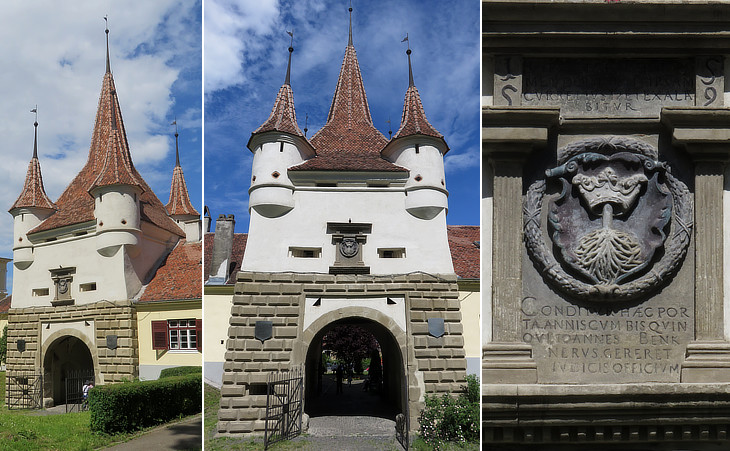 Poarta Ekaterinei (Katharinen-Tor) with the coat of arms of the town and a Latin inscription saying that Johannes Benkner held the office of city judge twice for five, i.e. ten years, and that the Katharinen-Tor was erected during his time in office (in 1559)

Before the gates of the town is a large open esplanade, forming a promenade, ornamented with avenues of trees. The gates themselves are still standing, and looking as terrible as when Kronstadt was still a place of strength. Paget
We follow the Rossmarkt to the W. to the Protestant Girls' School to the S. of which are the Katharinen-Tor and the Turnhalle (gymnasium). Baedeker
The four small turrets around the main one indicate that the magistrates of the town had the right of sentencing to death. They can be noticed also in other towns of Transylvania, e.g. at Sibiu and Sighisoara. 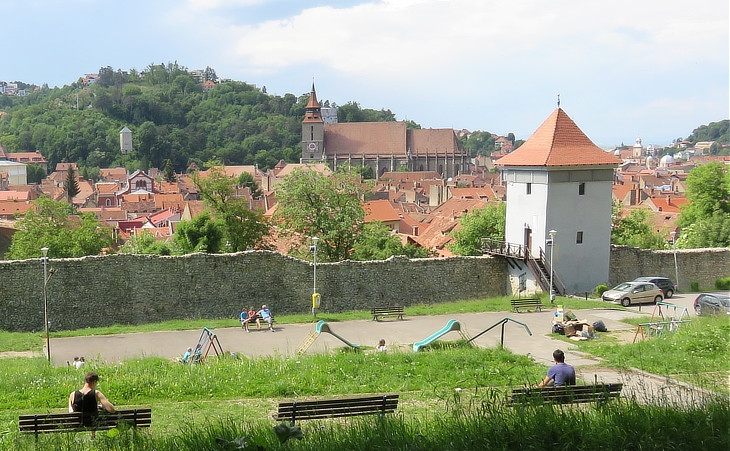 The town itself is regularly and well built, and its towers and walls and bristling spires, standing out against the mountain sides, themselves well covered with wood, and fretted with limestone peaks, form one of the most picturesque scenes the artist could desire. (..) Though the walls and gates of Kronstadt have been for the most part preserved, as indeed they well deserve, for many of the towers are exceedingly picturesque, the ditch has been wisely converted to the purposes of a public promenade, and a very beautiful one it makes. Paget
Round the town runs a promenade, the prettiest part of which is the Upper or Burg Promenade, to the S., on the slopes of the Zinne. Baedeker 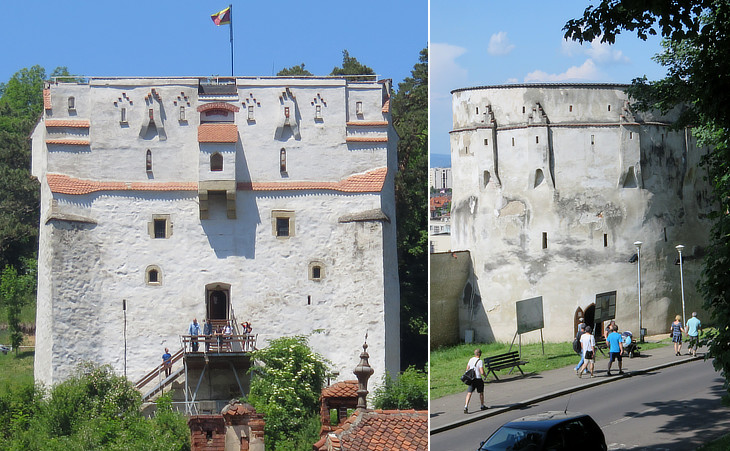 One of the fundamental laws of the Saxons is the equality of every individual of the Saxon nation. They have no nobles, no peasants. Not but that many of the Saxons have received letters of nobility, and deck themselves out in all its plumes; yet, as every true Saxon will tell you, that is only as Hungarian nobles, not as Saxons. (..) Their municipal government was entirely in their own hands; every village chose its own officers, and managed its own affairs, without the interference of any higher power. Paget
Similar to many industrious towns of Western Europe, Kronstadt had a government system based on locally elected bodies and in particular on guilds. The oldest existing guild charter for the Saxon territories is dated 1376. The names of the towers indicate the role the guilds had in the defence of the town, similar to what occurred at Sighisoara. 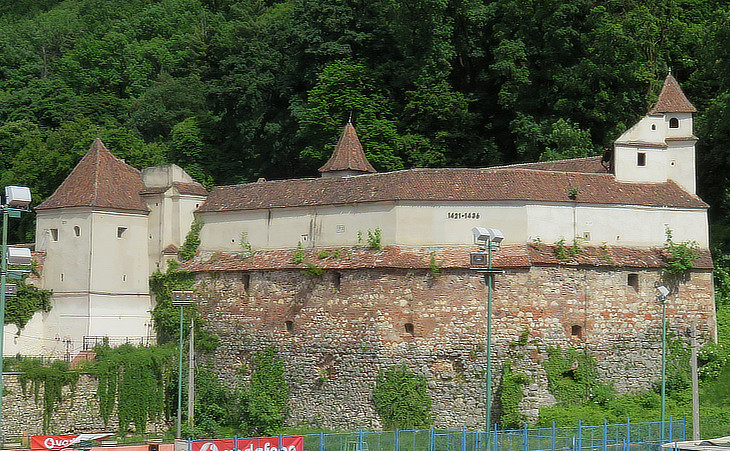 Fragments of the fortification-wall of the inner town still remain, including the Black Tower or Schwarzer Turm and the White Tower or Weisser Turm on the N., the so-called Graft below the Black Tower, and the Weber-Bastei at the S.W. angle. Baedeker 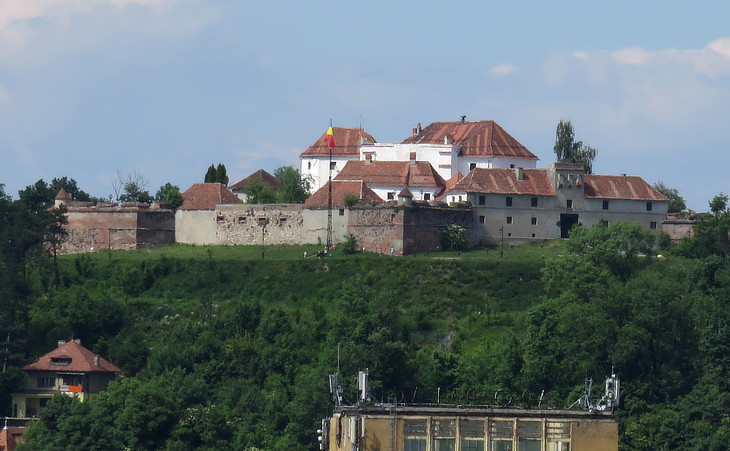 In front of the N. side of the inner town rises the Schlossberg (view), crowned by a citadel built in 1553 by Count Arco (an Italian nobleman at the court of the Habsburgs), the Austrian general, to protect Kronstadt from the Voivode Peter of Wallachia. Baedeker
The reference is perhaps to Patrascu the Good, Voivode of Wallachia in 1554-1557, a member of the House of Draculesti, who was ordered to invade Transylvania by Ottoman Sultan Suleyman. 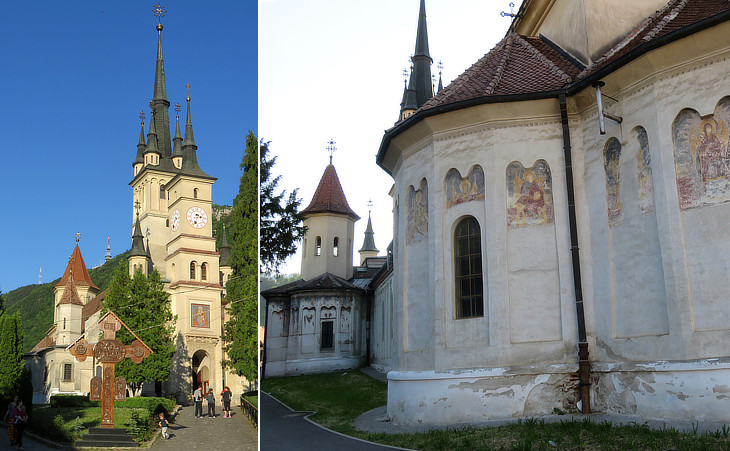 Beyond the walls of the old town we were shown the great Wallack church, the handsomest belonging to that body in the country, and, what is still more worthy of remark, rebuilt by an Empress of Russia in 1751. The interior is, as usual in Wallack churches, completely covered with paintings of saints and devils, the latter playing every sort of trick, to cheat the angel, and to overload the balance on the side of sin at the last judgment, which it was possible for the united imaginations of artist and priest to conceive. Paget
The Romanians could not live within the walled town which was reserved to the Saxons and to the other "privileged nations". For many centuries they were treated as serfs and had to give days of forced labour every year. Only after the revolution of 1848 they acquired full civil rights. 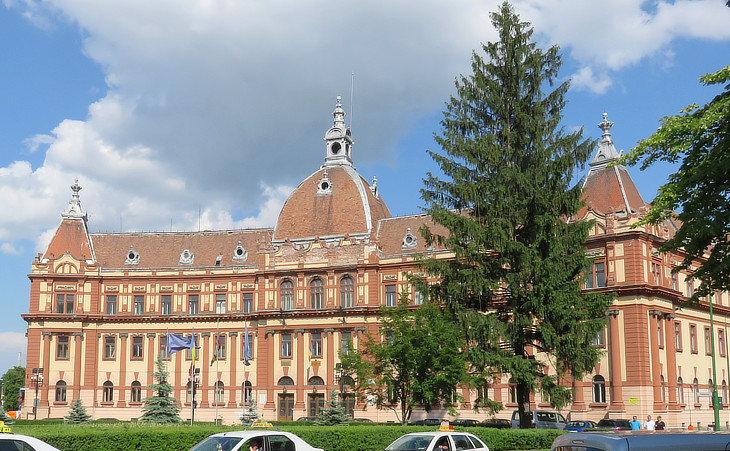 On the S.E. side of the inner town are several large public buildings: the County Offices, at the end of the Klostergasse; the Protestant Church, the Modern High School, the Gewerbe-Verein, the Commercial Academy, the Finance Office, and farther to the E. the Law Courts. Baedeker
In 1857 Emperor Franz Joseph approved a plan for providing Vienna with new gardens and public buildings. Over time similar plans were developed in many provincial towns of the Empire. The new buildings did not have a common style, but overall there was a preference for Neo Renaissance palaces. 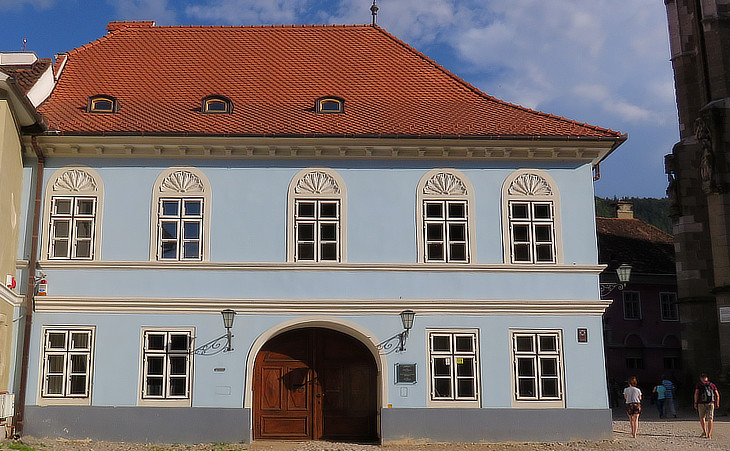