- Butrinto (Butrint)
(detail of a 1651 engraving by Marco Boschini)

Aerial view of the northern Corfu channel; (lower part) the island of Corfu with the town on the right corner; (upper part) coast of Albania; the dot indicates the site of Butrint

Jan. 14, 1805. We sail along the Albanian coast to the Bay of Buthrotum. (..) There is a rugged coast, parallel to the eastern extremity of Corfu, and forming with it the narrowest part of the channel. (..) As we approach Vutzindro, the water becomes muddy, and in the bay is almost fresh. This bay is very shallow on the northern side, and the bar at the mouth of the river will even now, when the water is at the highest, but just admit of the entrance of small coasting vessels. We row three or four miles up the river, through a plain once perhaps the property of Atticus, the friend of Cicero and now peopled with horses from the neighbouring villages.
William Martin Leake - Travels in northern Greece - 1835
Butintrò or Butrinto owes its name to the ancient town of Bouthroton (Greek)/Buthrotum (Latin), but the site was inhabited from prehistoric times. This because it was located on a very narrow canal linking a lake with the Ionian Sea: the lake (which has limited depth) was an easy source of fish: the access to the open sea favoured trade towards nearby Corfù. Between the Xth and the early XVth centuries Byzantines, Normans, Angevins, Bulgarians and Venetians took turns in occupying Butrinto.

(left) Lower Venetian fortress; (right) Venetian tower; the two are located opposite one another

We then arrive at the Vivari, or more vulgarly livari; that is to say, the principal fishery, which is on the left side of the river, at its exit from the lake, nearly opposite to the peninsula which was anciently occupied by Buthrotum. The only buildings at the Livari are a ruined house of Venetian construction, and near it an old triangular castle. (..) The place is called Vutjindro: the territory comprehends all the lake, and a part of the surrounding hills. In the house live the superintendent of the fishery and fourteen Greeks, who are employed hy him. (..) Immediately opposite to it are some other ruins which appear to be Venetian; among them is a tower resembling those on the coast of Malta.(..) The fish are caught by means of a strong permanent dam, made of large beams, crowned with a palisading of reeds. At intervals are small chambers in the dam, where the fish are taken in passing out of the lake. (..) The fish are salted on the spot, and the greater part sent to Corfu, which depends upon Vutzindro and the Gulf of Arta for its supply of fish during the long fasts of the Greek church. (..) From hence also Corfu is chiefly furnished with firewood, and with staves to make casks for its oil and wine. These circumstances explain the importance which Venice always attached to the possession of Bucintro. Leake
The Venetians built a small fortress on the site of the ancient acropolis, but later on moved their fortifications to the entrance of the canal (on the lake side). This presumably because the garrison was in charge of levying a duty on the fish shipped to Corfu and the new location was more practical.

View from the upper Venetian fortress; (enlargement) fortress built by Ali Pacha of Tepeleni on the site of a monastery (in the foreground the national flag of Albania)

Wild swine are very numerous among the thickets along the edge of the lake, particularly in the peninsula of Buthrotum; and the place is infested with jackalls. (..) In summer the air is extremely unhealthy; and there is no drinking water, but that of the river, which in winter is extremely turbid. A rocky summit on the western side of the ruins commands a fine view of the Epirote coast, as well as of all the eastern side of Corfu. On the narrow ridge which separates the lake from the bay of Examili, stands the monastery of St. George, surrounded with gardens, olive-grounds, and vineyards; it is now occupied by Aly as a military post. Vutzintro is entirely in the hands of Ali. Leake
The Venetian possession of Butrinto was not without interruptions, but in 1718 the Peace of Passarowitz formally certified that the site including the lake belonged to the Republic. Venice fell in 1797 and Ali Pacha of Tepeleni, who ruled over most of southern Albania and Epirus (north-western Greece), took the opportunity to occupy Butrinto. 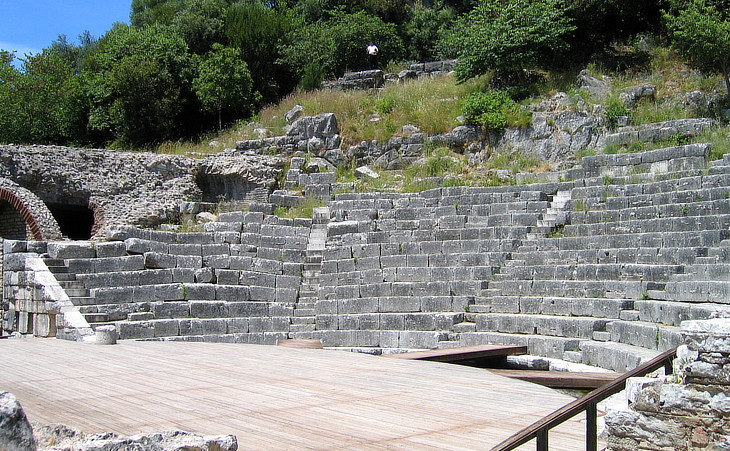 The ruins of Buthrotum occupy a peninsula which is bounded on the western side by a small bay in the lake, and is surrounded from the north to the south-east by the windings of the river just above its issue. The walls of the Roman colony still exist in the whole circumference, which is about a mile, and are mixed with remains both of later and of Hellenic work, showing that the city always occupied the same site. Leake
The Roman town had baths, an aqueduct, a gymnasium and a theatre. 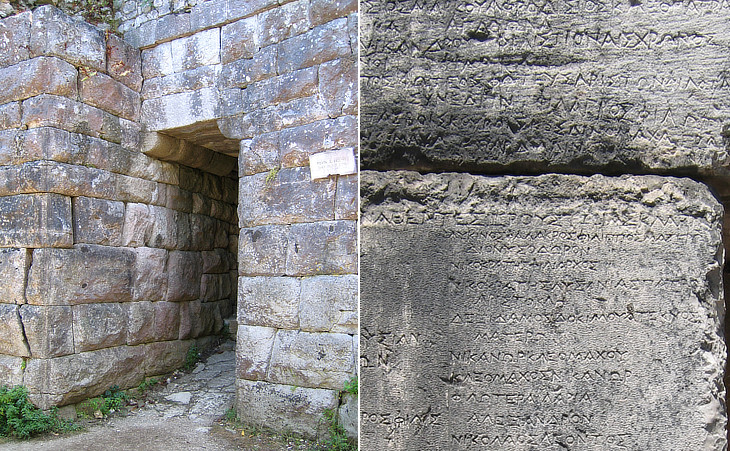 The towers which flank the walls were built with a salient angle, and some of them were of this form. The citadel was towards the bay of the lake, where the side of the peninsula is the highest and steepest. Of the Hellenic remains there is a very perfect piece of wall on the south-eastern side, which, as it consists of regular courses, is probably not much older than the time of Pyrrhus. There is also a fine remnant on the western side, of which the courses are nearly equal and parallel. Leake
Next to the theatre there is a very interesting "Inscription Wall". Experts have concluded that the many names quoted in the inscriptions refer to manumitted slaves and their owners (see similar inscriptions at Delphi). Manumissions (releases from slavery) usually had the objective to celebrate some events or to encourage the colonization of an area by liberti (freemen). 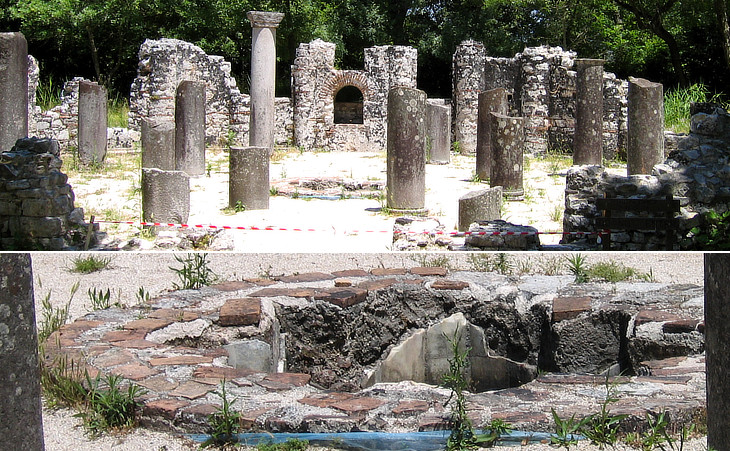 Ancient Butrint: round baptistery and detail of its font (see a similar baptistery at Ephesus)

Within the inclosure are the ruins of a large church, of two or three small ones, and of some cisterns, baths, and houses. There are also some fragments of granite columns and of other marbles. Leake
The image in the background of this page shows a detail of a mosaic in a church of ancient Butrint.

View of the Roman baths from the upper fortress

Butrint has a special atmosphere created by a combination of archaeology, monuments and nature in the Mediterranean. With its hinterland it constitutes an exceptional cultural landscape, which has developed organically over many centuries.
From the UNESCO synthesis of the universal value of Butrint which in 1992 was added to the World Heritage List.

In the 1920s an Italian archaeological mission excavated the site and unearthed significant remains of the ancient town. On this occasion the crumbling Venetian castle at the top of the hill was almost entirely rebuilt to serve as lodging and shelter for statues and reliefs. It now houses a small museum.