- Carpineto
(detail of a fresco at S. Onofrio)

Ferdinand Gregorovius, a German historian best known for his studies on medieval Rome, spent the summer of 1860 at Genazzano with his friend Johannes Muller, a painter; the two decided to go on a ride across the Volsci Mountains to see the Pontine Marshes. The journey was described in an account (Aus den Bergen der Volsker) written by Gregorovius for a German paper (you can read the English translation by Dorothea Roberts in Bill Thayer's Web Site). Muller was a watercolourist who later on opened a studio in Piazza Barberini. 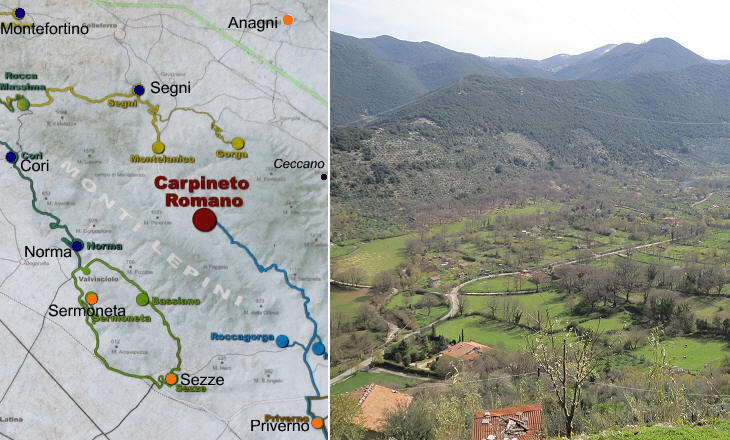 After having visited Segni Gregorovius and his friend crossed the Volsci Mountains to reach Norma and the Pontine Marshes. They rode through thick forests with the help of a local guide. As an alternative they could have followed a road in a valley along the eastern side of the mountains which ends at Priverno.
Carpineto is the main town in this valley and it is named after carpini (hornbeams), trees which can be seen in the coat of arms of the town shown in the image used as background for this page. The woods around Carpineto have many beeches in addition to hornbeams, whereas the valley is characterized by olive groves. 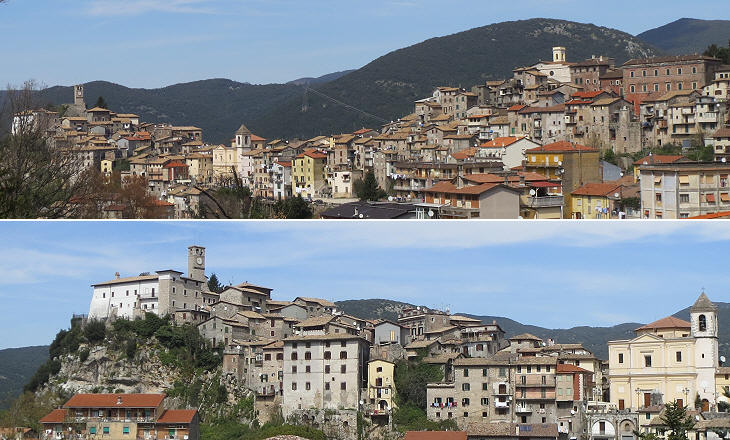 According to tradition Ascendant ad montes (they should establish themselves on the mountains) is the advice Byzantine Emperor Heraclius gave representatives of his Italian subjects because he was unable to defend them from the Longobards. Saracen raids on the western and southern coasts of the Italian peninsula increased the need for its inhabitants to build new towns in difficult to reach locations, such as the ridge at 550m/1800ft where Carpineto was founded.
The oldest record about Carpineto dates 1077; it says that the town and its surroundings were leased by the deans of S. Giovanni in Laterano to the da Ceccano, a family named after the town it ruled. Ceccano is situated behind the mountains to the east of Carpineto.

(left) Houses built on the edge of the rock; (right) Castello Aldobrandini

Carpineto stretches over two peaks which both were fortified. The two sections of the small town were often at war with each other. The fortifications of the lower peak (Dabballe meaning "on the valley side" in the local dialect) were modified in the early XVIIth century by the Aldobrandini, the family of Pope Clement VIII, but they still retain a tall XIIIth century tower and overall their original shape is still evident. The fortifications of the higher peak (Dammonte, on the mountain side) are no longer identifiable as they were incorporated into later buildings. 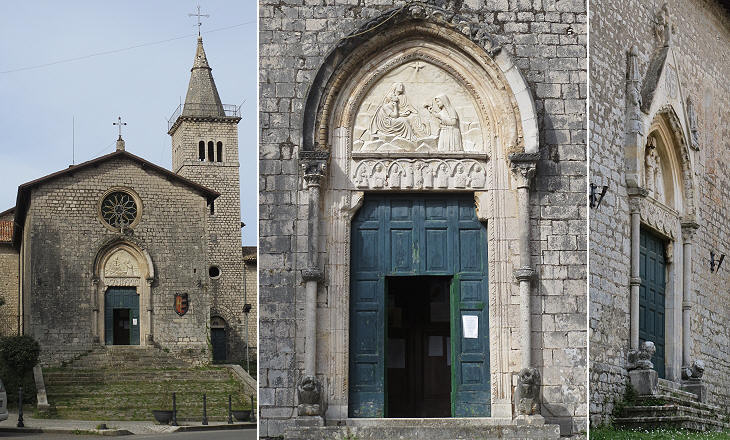 S. Agostino and its two portals

S. Agostino was a medieval church of a monastery outside the walls of the town. It was rebuilt in the late XIXth century at the initiative of Pope Leo XIII who was born at Carpineto. Luckily its two portals were not affected by the changes with the exception of a modern relief in the front portal. 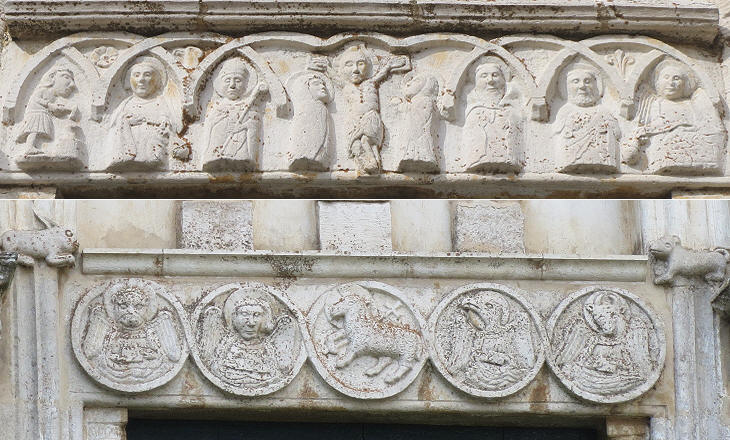 S. Agostino: lintels of the front portal (above) and of the side portal (below - showing the Lamb of God and the symbols of the Four Evangelists)

The decoration of the front portal includes a puzzling detail: angels and saints are placed at the sides of a Crucifixion scene, but the left end of the relief portrays a blacksmith at work. It is perhaps a reference to Sermon 141 by St. Augustine: And what by the works of God thou hast come to know, by the works of man thou losest. Thou hast considered the universe, hast collected the order of the heaven, the earth, the sea, and all the elements; thou wilt not take heed to this, that the world is the work of God, an idol is the work of a carpenter. Translated by R. G. Macmullen. The Latin text says idolum opus est fabri and faber is more correctly translated as blacksmith. 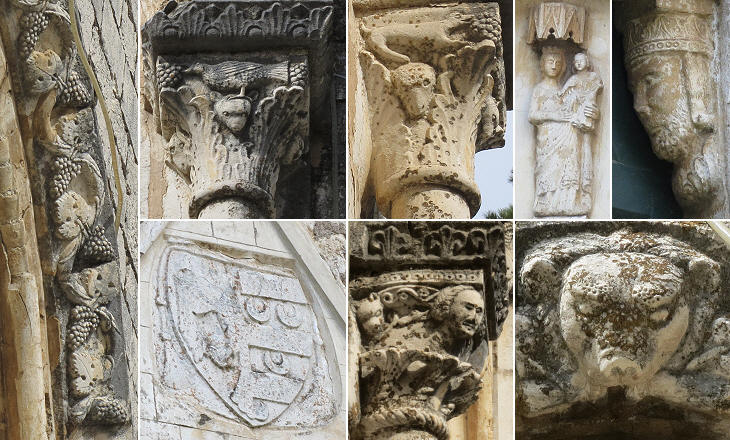 The decoration of the capitals departs from religious subjects to depict episodes from Aesop's fables, including the Fox and the Grapes. The side portal bears the coat of arms of Cardinal Annibaldo di Ceccano, who held important positions when the Popes resided at Avignon. The three half-moons of his coat of arms indicate that members of the family took part in the Crusades. In 1350 Carpineto became a possession of the Conti di Segni. 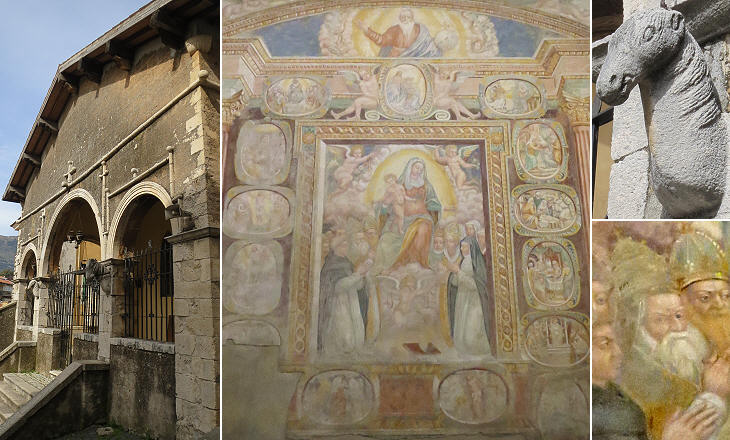 In 1476 a major pestilence struck Rome and its environs. Pope Sixtus IV led processions and other ceremonies aimed at ending the epidemic. In 1483 he endorsed the construction of a church at Carpineto celebrating its end. The church houses a chapel dedicated to St. Roch, who was specially invoked against pestilences. The interior contains a large fresco celebrating Our Lady of the Rosary, the feast of whom was instituted by Pope Pius V after the victory of the Christian fleet at the Battle of Lepanto. 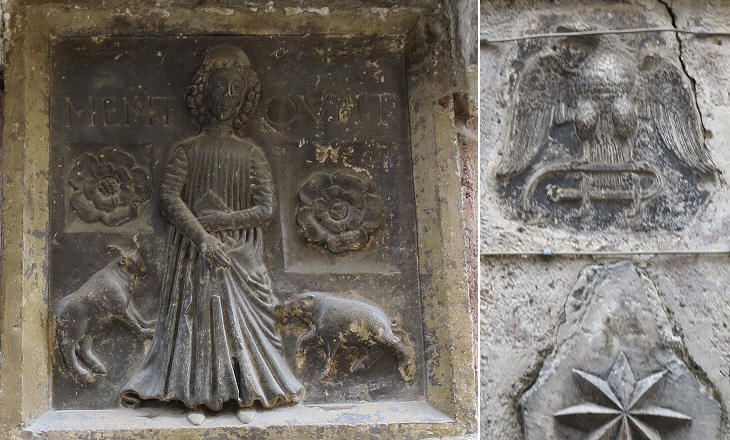 Reliefs in Via Costa

Some of the families who ruled Carpineto left traces of themselves on various buildings. The five-petal rose is a typical symbol of the Orsini. The main fiefdoms of this family were situated north of Rome (e.g. Bracciano, Vicovaro), but in 1530 Napoleone Orsini, Abbot of Farfa, briefly seized Carpineto and the Orsini (as well as the Colonna) claimed the town until Pope Sixtus V denied their rights.
The eight-point star was one of the heraldic symbols of the Aldobrandini. In the relief shown above it is associated with another heraldic symbol (an eagle holding a belt) which can be seen at many places in Carpineto. 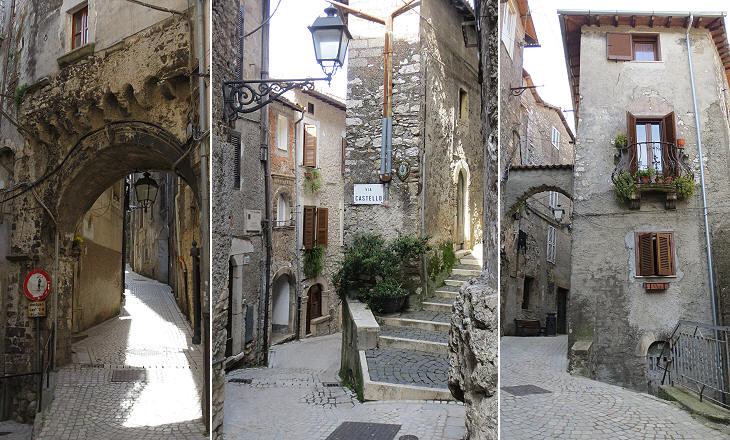 Although Carpineto was founded in the Middle Ages its prevalent character is that of a XVIth century town with several almost straight streets, one of which was known as il Corso, because it housed a horse race (It. corsa) known as Pallio della Carriera (see the website dedicated to its yearly re-enactment - it opens in another window). Renaissance windows (inscription: Da Pacem D(omi)ne in Diebus Nostris = Give peace, O Lord, in our time - from a medieval hymn)

During the XVth century the study of Roman triumphal arches (e.g. Arco di Tito) led to the development of windows and doorways with a round top framed by a rectangle. Carpineto has many such windows and a few doorways. Some of them bear short sentences in Latin or Italian. This can be seen at other locations (e.g. Rome in Via dei Coronari, Ascoli, Vitorchiano). 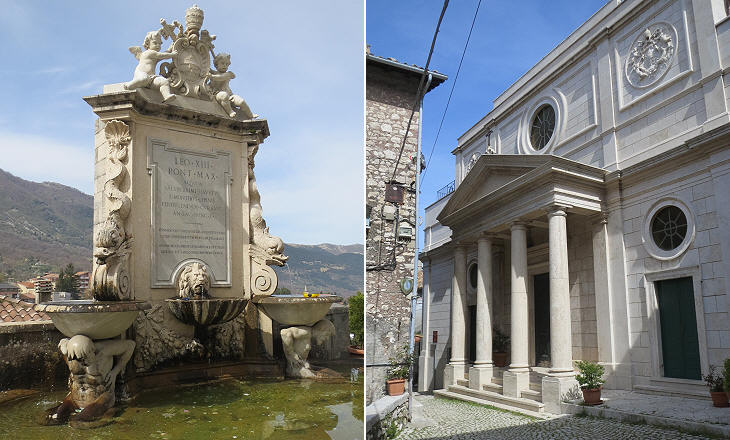 In 1878 Cardinal Gioacchino Pecci, who was born at Carpineto, was elected Pope Leo XIII. He was the first pope who was not the monarch of a country after more than a thousand years. Yet he did his best to improve the living conditions of his fellow citizens. He promoted the construction of an aqueduct and the renovation/construction of many churches. Unfortunately some of the architects he chose designed buildings which do not fit with the overall urban landscape of Carpineto.