Farnese, Ischia, Cellere and Valentano
(Tower at Marta before a recent restoration)

Fourteen miles north of Toscanella (Tuscania) is Ischia, an Etruscan site, with ravines full of ordinary tombs. Two miles west of this is Farnese, also of Etruscan origin. Two or three miles further is Castro, where the hill-side is covered with the ruins of a flourishing city, utterly destroyed by Pope Innocent X. in 1647, because its bishop had been murdered by Farnese, Lord of Castro! The see was at the same time removed to Acquapendente. Castro is a beautiful place with ravines overhung with ilexes, two ruined bridges, and tombs and columbaria hewn in the cliffs.
Augustus J. C. Hare - Days near Rome - 1875 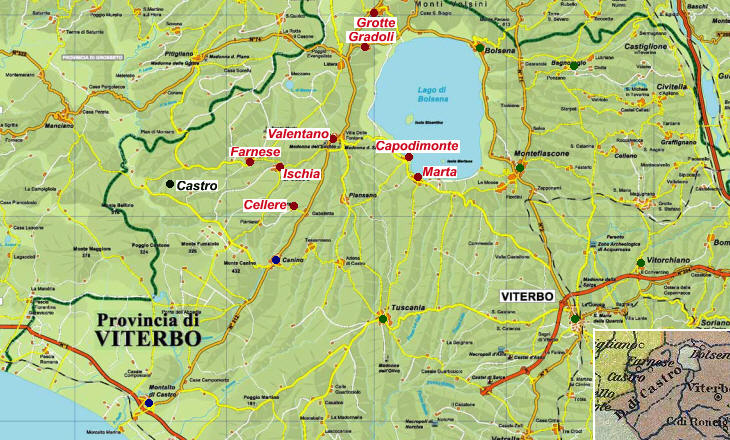 Cardinal Alessandro Farnese seniore, who became Pope Paul III in 1534, was born in Canino, a small town in Northern Latium. The Farnese had several possessions in the area and they acquired other fiefdoms in order to form a continuous territory from the Tyrrhenian Sea to Lake Bolsena. In 1537 Pope Paul III assigned this territory to his son Pier Luigi as a hereditary fiefdom (a duchy) in the frame of the Papal State.
Pope Paul III tried to make Montefiascone the capital of the new duchy, but the inhabitants refused his offer.
The Duchy was named after Castro, a very small town which however was the seat of a bishopric. The Pope and his son asked Antonio da Sangallo the Younger to redesign and embellish the town. After Sangallo's death in 1546 the task was assigned to il Vignola.
Though formally vassals of the Papal State, the Dukes of Castro acted as independent sovereigns as they did in the Duchy of Parma and Piacenza, another Farnese fiefdom which was formally part of the Papal State.
In 1641 Pope Urban VIII sent troops to occupy the Duchy of Castro, in an attempt to assign it to his own family (Barberini), but Duke Odoardo Farnese, with the support of Venice and Tuscany, invaded the Papal State (from Parma) and marched towards Rome. The intervention of French Cardinal Jules Mazarin led to an agreement by which Castro was returned to the Farnese.
A few years later in 1649, Pope Innocent X reacted to the killing of the Bishop of Castro, whom he had just appointed, by charging the Farnese with being its instigators. Young Duke Ranuccio II Farnese was unable to support Castro which was seized by papal troops.
Because Pope Innocent X feared that France or Spain could intervene and broker an agreement which forced him to return the Duchy to the Farnese a second time, he ordered that Castro should be razed to the ground. Not only the walls were pulled down, but the whole town was systematically demolished, including the churches. The bishopric seat was moved to Acquapendente and the bells of the cathedral were relocated to S. Agnese in Agone in Piazza Navona which the Pope was in the process of rebuilding. Eventually a column was erected on the site of the town with the inscription "Qui fu Castro" (Here was Castro).
The other towns of the former Duchy were not significantly impacted by the war and almost all of them retain a palace and other monuments built by the Farnese. 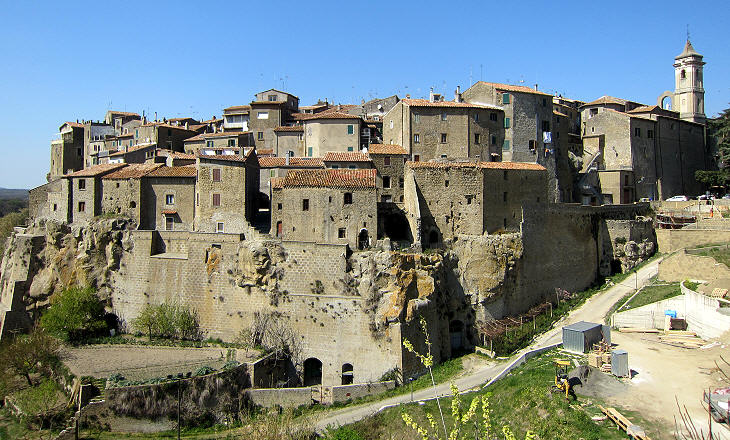 Similar to many other towns of the region, Farnese was probably founded in the Xth century, during a very chaotic period when the inhabitants of Latium sought refuge in small fortified settlements built on tufaceous hills surrounded by deep ravines.
In the XIIIth century Castrum Farnetum (Farnetum Castle) was part of the territory controlled by the most important families of Orvieto and it eventually was associated with one of these families. With the move from Vulgar Latin to Italian the town and the family were renamed Farnese. 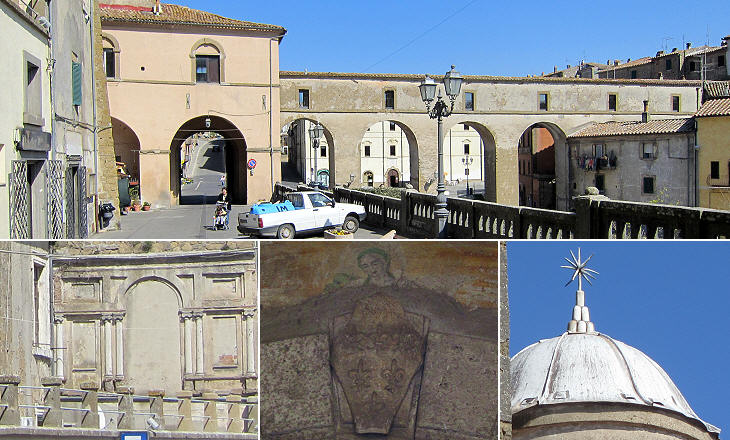 (above) The main gate and the bridge which linked Palazzo Farnese with its (lost) gardens; (below-left) detail of Palazzo Farnese; (below-centre) Farnese coat of arms inside the gate; (below-right) dome of a chapel inside Palazzo Farnese showing the heraldic symbols of the Chigi

The Duchy of Castro was divided into smaller fiefdoms which were assigned to minor branches of the ducal family. One of these branches ruled Farnese and built a long bridge to link the town palace with (lost) gardens on a nearby hill. All the Farnese spent money like water to build palaces, villas and gardens and in 1658 the fiefdom of Farnese was sold to Cardinal Flaminio Chigi, nephew of Alexander VII the reigning pope. At the end of the XVIIIth century the Chigi branch living at Farnese decided to move to a new residence outside the walls and the town palace was partitioned without regard for its historical and artistic value. 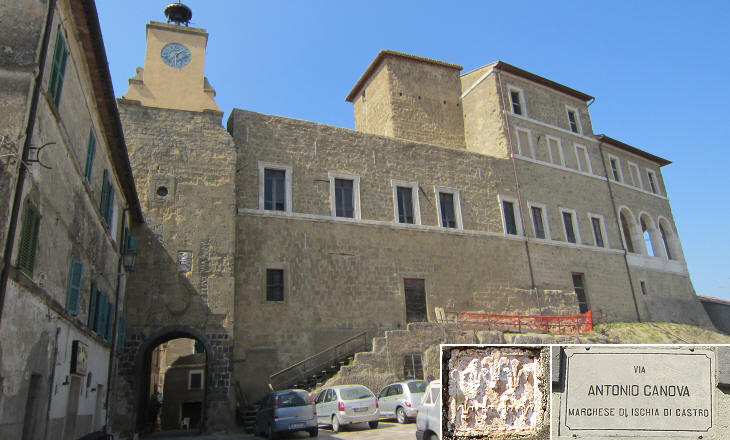 Gate and Palazzo Farnese; (insets) heraldic symbols of the Farnese and street named after sculptor Antonio Canova whom Pope Pius VII rewarded with the title of Marquis of Ischia for his success in retrieving works of art stolen by the French

Antonio da Sangallo the Younger was the preferred architect of the Farnese and he was involved in redesigning the medieval palace of the family at Ischia, another small town which was accessible only through one gate. The size of the palace is remarkable considering that the town was rather small and it was the closest one to Castro where the Duke had his residence. 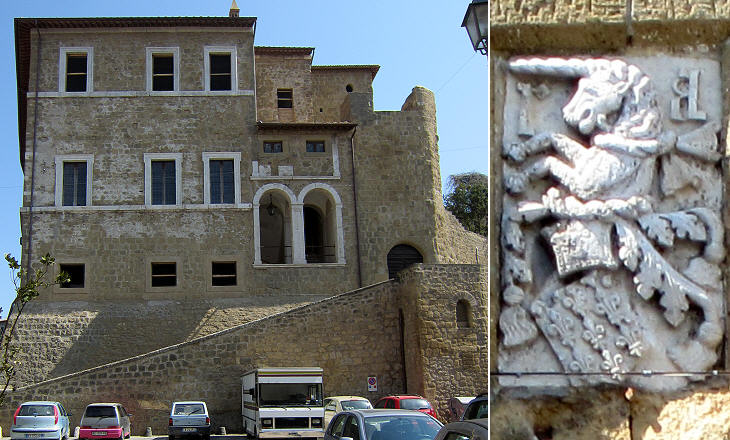 (left) Rear side of Palazzo Farnese; (right) unicorn, another heraldic symbol of the Farnese, holding the Duke's coat of arms

An elaborate coat of arms of the Farnese was placed at the entrance to Ischia. It is almost identical to other coats of arms which can be seen at Valentano, Capodimonte and Marta. The fleurs-de-lys are seven and they are not arranged in an inverted pyramidal shape as the six fleurs-de-lys of the coat of arms of Pope Paul III at Palazzo Farnese which was designed by Michelangelo. For this reason historians believe that the coat of arms was placed by Pier Luigi Farnese seniore, the father of the Pope. 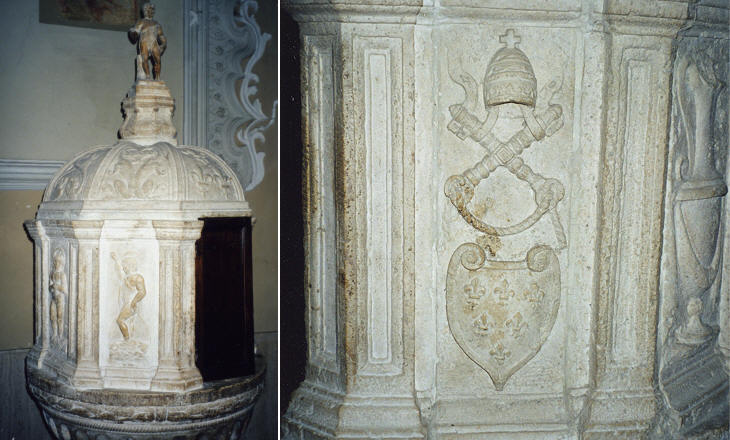 The Farnese were not only interested in building palaces and villas for themselves, but they cared for the embellishment of churches too. This occurred especially in the first years of the Duchy of Castro because in 1545 the Farnese were assigned the Duchy of Parma too and they shifted their attention there.
The image used as background for this page shows the Farnese fleur-de-lys on the entrance of a house of Ischia. 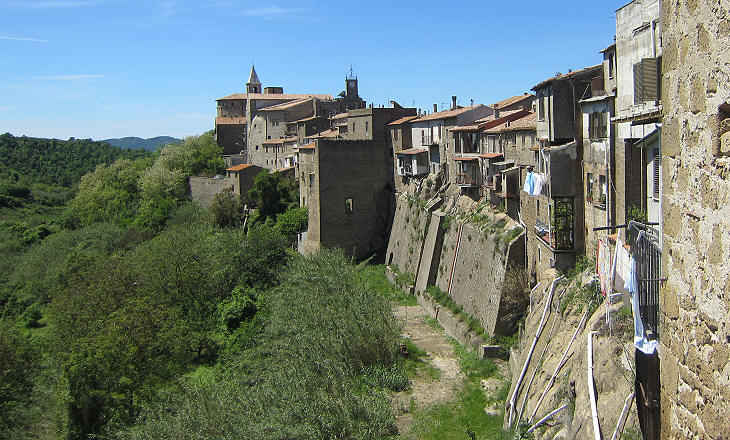 Similar to Farnese and Ischia, Cellere is protected by deep ravines. In its case two ravines run parallel to the town for almost a mile and they are very close one to the other so that Cellere consists of a very long main street and a series of small alleys perpendicular to it. The medieval settlement was very small and access to it was protected by a tower. 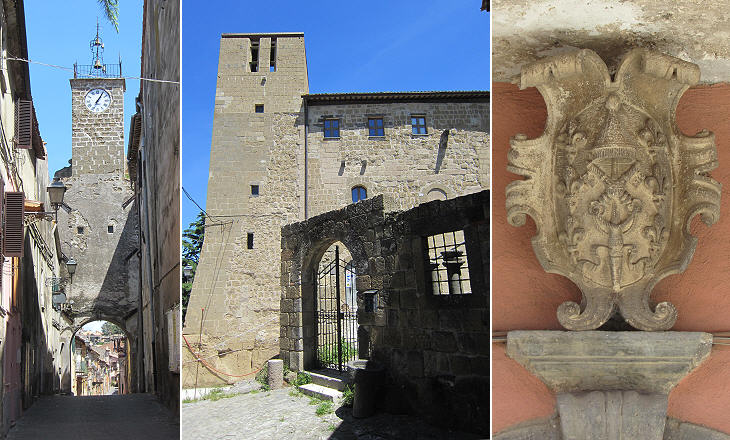 The Farnese promoted the development of Cellere outside the gate along the ridge. After the fall of the Farnese the economy of the former Duchy of Castro worsened. The thick woods which stood near the border with Tuscany became a haven for brigands. Domenico Tiburzi, one of the last brigands (he was killed in 1896) was born in Cellere and the town houses a museum on the social aspects of brigandage. 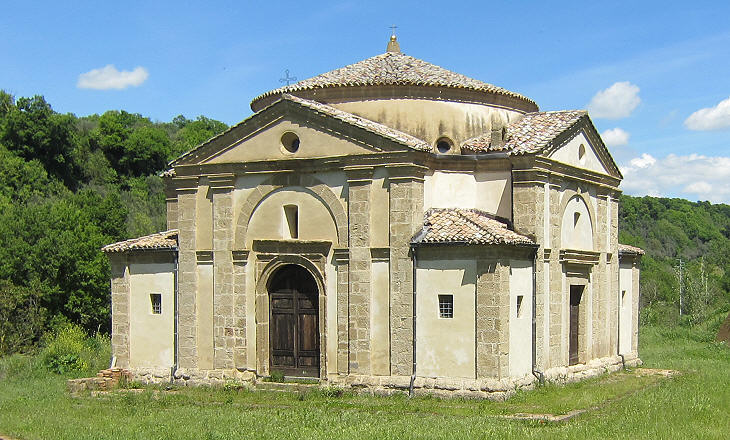 St. Giles was a VIIth century hermit saint who is said to have lived for years drinking the milk of a hind. Some of the churches dedicated to him were built outside towns perhaps because of his life as a hermit or because he was the patron saint of lepers (you may wish to see the Abbey of Saint-Gilles, near Arles).
S. Egidio was commissioned to Antonio da Sangallo by Cardinal Alessandro Farnese seniore, but it was most likely completed after the latter became pope. Its isolation allowed Sangallo to design a building which reflects the Italian Renaissance search for perfect proportions and the preference for Greek cross churches (you may wish to see S. Maria della Consolazione at Todi). The lower part of S. Maria di Loreto in Rome, another church by Sangallo, shows a design similar to S. Egidio. 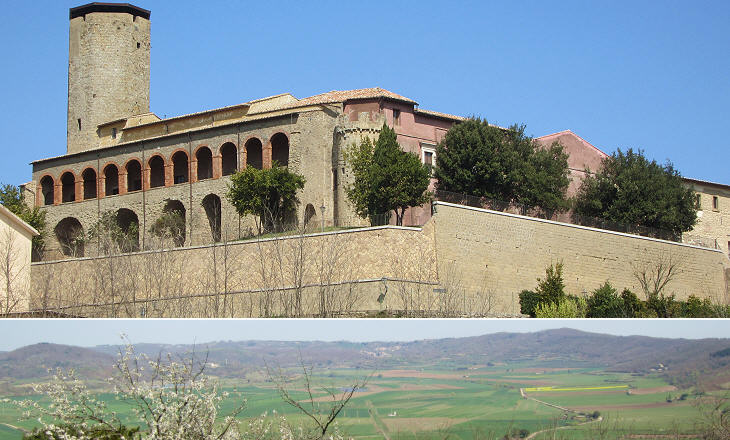 (above) Walls of Valentano and Palazzo Farnese; (below) view of a volcanic crater to the north of Valentano

Valentano, high on a hill commanding great views over Lake Bolsena and a nearby empty crater, was the most important town of the Duchy after Castro. Its development was not hampered by ravines and its defence was provided by a complete curtain of walls. Because of its height (538 m /1,700 ft) Valentano was not affected by malaria and the Farnese often stayed there. 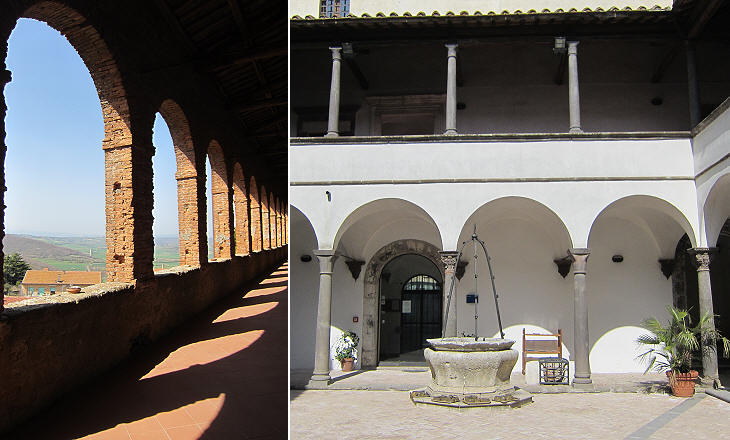 Antonio da Sangallo modified the old fortress of Valentano which protected its western gate and turned it into a Renaissance palace structured around a large courtyard. Most of the changes were made on the occasion of the marriage between Pier Luigi Farnese and Gerolama Orsini in 1519; the couple lived for some years at Valentano and their first child - Cardinal Alessandro Farnese iuniore (junior) - was born there. The building, which in the XVIIIth century was turned into a convent, currently houses a museum with rare Iron Age objects found near Lake Bolsena. 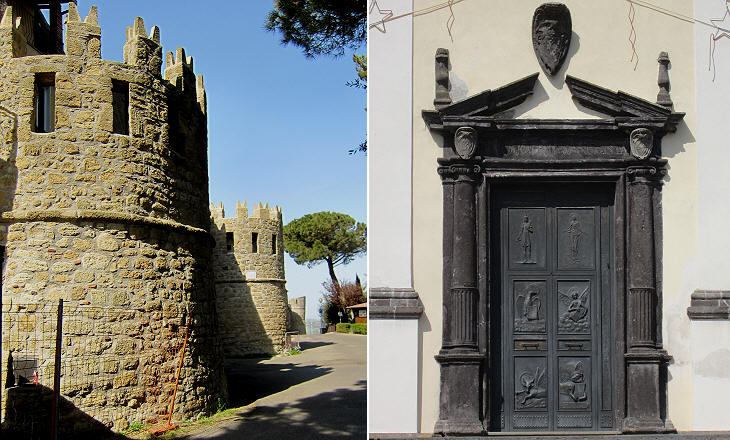 The Farnese commissioned il Vignola the construction of a grand gate which actually was completed only two centuries later (you may wish to see it in a page on the gates of the Popes), but overall the walls of Valentano retain their XVth century aspect. Cardinal Alessandro Farnese iuniore promoted the enlargement of the main church of Valentano (you may wish to see the countryside palace he built at Caprarola andlearn more about him). 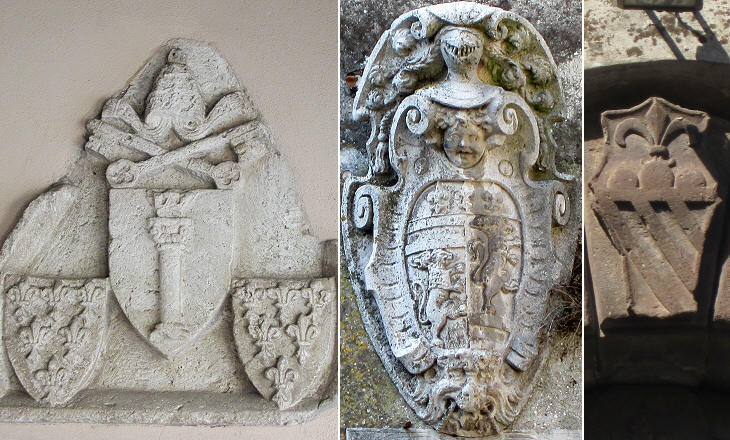 (left) Coat of arms of Pope Martin V between two Farnese coats of arms; (right) coats of arms of local noble families who were allowed to add the Farnese fleurs-de-lys to their heraldic symbols