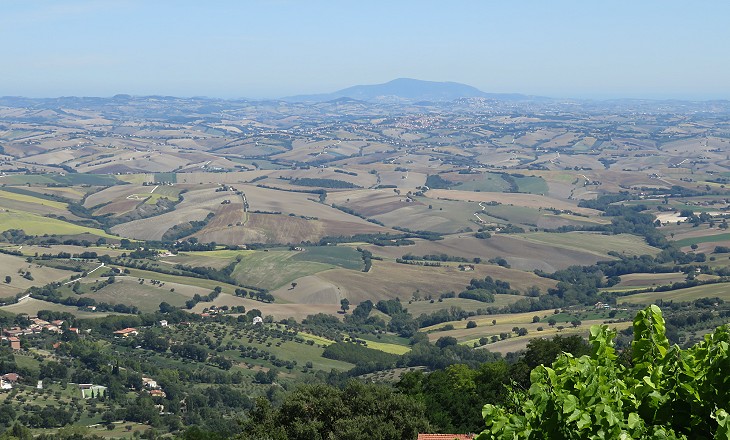 The night has not yet fallen in Cingoli is a local popular saying which means that there is still some time left to do something or that the outcome of a battle is not yet clear. Cingoli stands at an elevation of 630m/2,070ft on an isolated mountain so it still receives sunlight when the surrounding countryside is already in the dark. It enjoys commanding views, to the point that it is known as the Balcony of the Marches. You may wish to see another view from Cingoli in the introductory page or a view from Treia, another town which claims to the Balcony of the Marches. 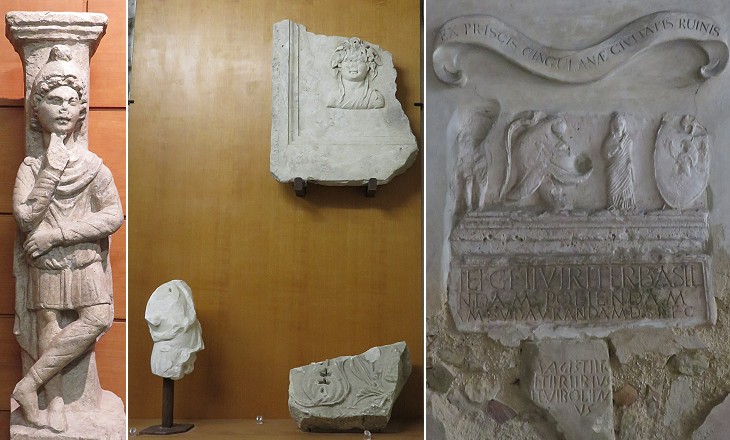 cingulum was the name of the belt worn by Roman legionaries and Cingulum, the Latin name of Cingoli, was perhaps a reference to the elliptical shape of the town which resembled a belt. Based on reliefs, statues and inscriptions found in its surroundings, Cingulum was a flourishing town with an economy based on agriculture. There are records about its Bishops until the middle of the VIth century when the town was razed to the ground during the wars between the Byzantines and the Ostrogoths/Longobards. During the IXth century the ancient town was repopulated and its inhabitants began a long fight to obtain some measure of self-government from the Bishops of Osimo, their feudal lords. The history of medieval Cingoli is marked by a long series of conflicts and alliances with other towns of the Marches, mainly aimed at freeing Cingoli from the supremacy of Osimo. The town was surrounded by walls which in part retain their medieval picturesque aspect. 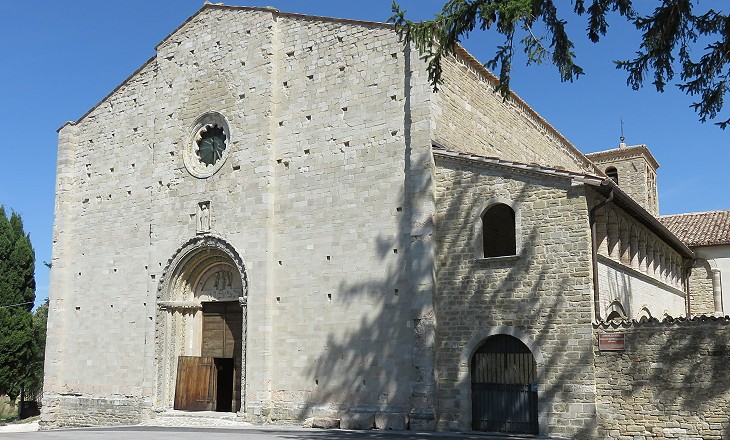 The most interesting monument of Cingoli is located outside the town. It is a small abbey built by Camaldolese (Benedictines) monks as a hermitage site and to house the tomb of St. Esuperanzio, a Vth century Bishop of Cingulum. The abbey eventually became a possession of the inhabitants of Cingoli who promoted its enlargement and embellishment. 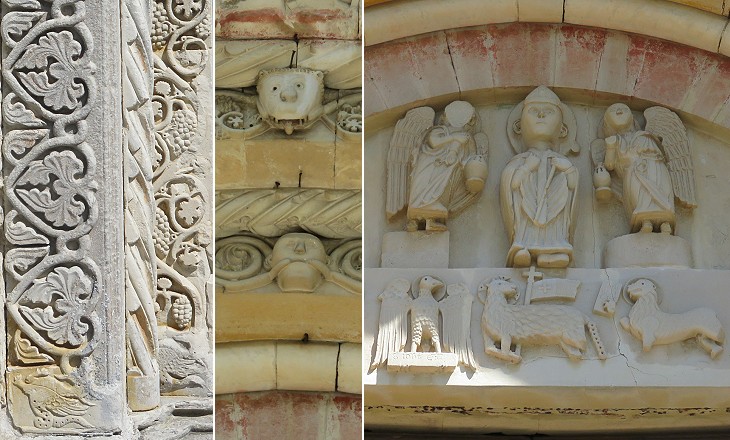 S. Esuperanzio: details of the portal

In 1295 Jacopo da Cingoli, a local sculptor, decorated the façade with an elaborate portal which he signed. His reliefs are rather well executed and they recall those in S. Maria in Piazza at Ancona. The statues are rather naive, but not without a childish elegance. The inscription on the portal says that in 1295 Jacopo da Gubbio was Priore of Cingoli. In this case Priore means the first one/the leader and it indicates that the inhabitants of Cingoli, similar to what occurred in many other Italian towns including nearby Fabriano, called in a foreigner to act as the chief magistrate of their community. 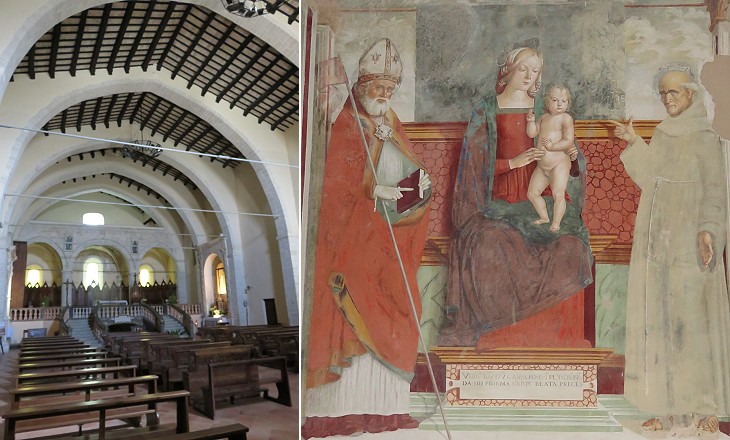 The design of the interior of S. Esuperanzio is rather unusual with six pointed arches supporting the roof of the only nave. During the plague of 1591 the church was used as a lazaretto because of its remote location. Its walls were whitewashed to improve hygiene so that many frescoes were covered until 1920 when an in-depth restoration was carried out. During winter it was not easy for the inhabitants of Cingoli who were parishioners of S. Esuperanzio to attend Mass there because of the snow. A small church dedicated to St. Esuperanzio and St. Nicholas was therefore built inside the walls. In the XVIth century a side portal was removed from S. Esuperanzio and utilised for S. Nicolò.
The central part of Cingoli was renovated in the XVIIIth/XIXth century, whereas the quarter near Porta del Spineto retains its medieval character. (left) Older part of S. Filippo; (right-above) old relief on the façade of the rebuilt church of S. Girolamo; (right-below) detail of the old portal of S. Francesco by Jacopo da Cingoli

The XIIIth and XIVth centuries were a period of economic development for Cingoli, notwithstanding the town was embroiled in a never ending feud with Osimo. Many churches were built during that period, but they were greatly modified in the following centuries. 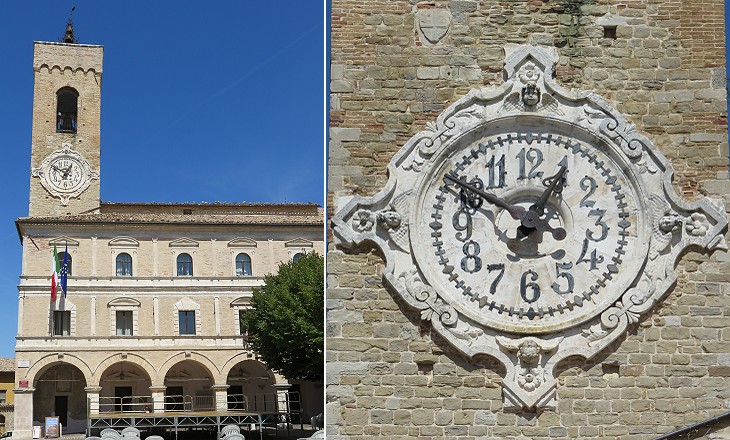 The Town Hall and in particular its high tower was the symbol of the independence of Cingoli. In the late XVth century parts of the building, but not the tower, were close to collapsing. The construction of a new Town Hall began in 1482 and it was completed in 1531. At that time Cingoli had entirely lost its self-government and it was ruled by Cardinal Egidio Canisio (aka Egidio da Viterbo), who had been appointed governor of the town by Pope Clement VII in 1524. 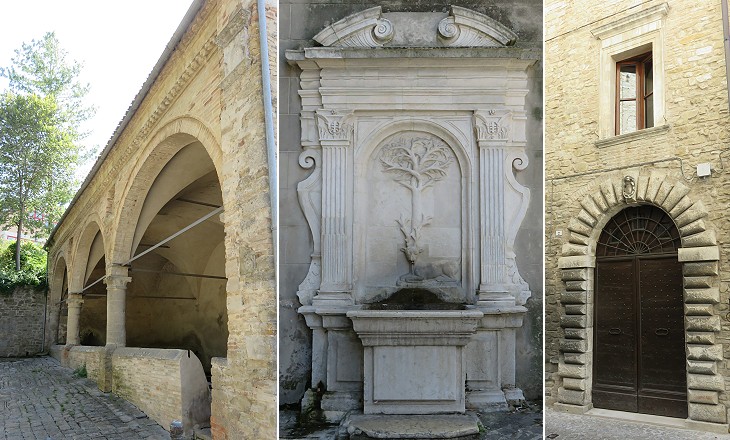 Cardinal Canisio promoted the construction of a large fountain which is located midway between S. Esuperanzio and the walls of Cingoli. In town the inhabitants could supply themselves with water at another fountain, which however was dry in summer (it is therefore known as "Fountain of the Bad Weather").
The Simonetti were a wealthy family from Jesi who in the early XVIth century established themselves in Cingoli where they built a series of small Renaissance palaces. According to tradition St. Sperandia was a Benedictine nun of the XIIIth century. Her name means "trust in god". She was not included in the official list of saints issued in 1584, but her cult on a local basis was accepted and she still is one of the patron saints of the town. The church dedicated to her is the best example of XVII/XVIIIth century style in Cingoli. S. Sperandia - Cantoria, balcony for the choir (you may wish to learn about organs and cantorias in Rome)

In 1725 the inhabitants of Cingoli saw one of their dreams come true. Pope Benedict XIII declared their town a bishopric see, but not entirely so because they had to share the Bishop with Osimo. As a matter of fact most Bishops preferred to live in that town and came to Cingoli only for some celebrations. As from 1985 Cingoli shares its Bishop with Macerata, Tolentino, Treia and Recanati. 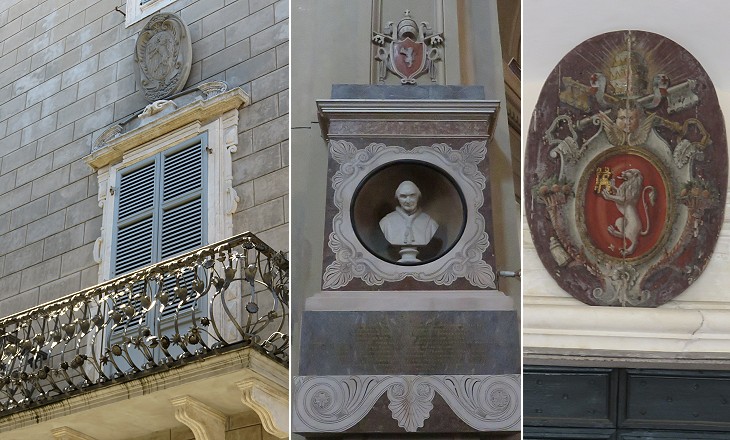 In March 1829 another dream of the inhabitants of Cingoli came true: Cardinal Francesco Saverio Castiglioni, a native of their town, became Pope Pius VIII. It was a bit like winning the lottery and losing the ticket, because the Pope died in the following year. The new Cathedral was never completed and other initiatives which the Pope could have promoted for the benefit of his fellow citizens did not materialize, apart from Porta Pia, a new gate. 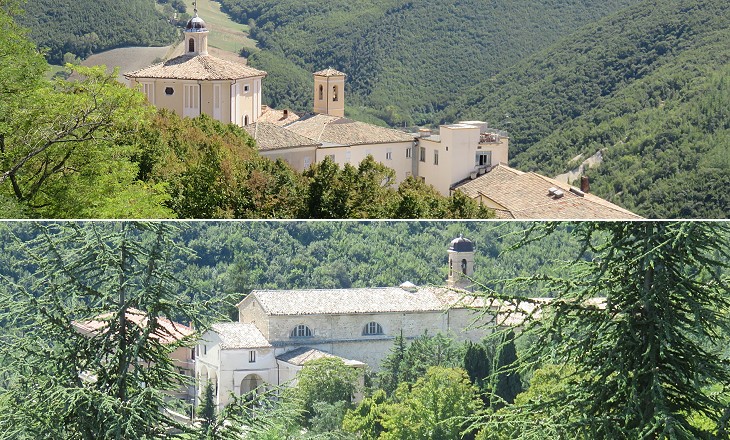 Out of town convents: (above) Santa Caterina d'Alessandria; (below) S. Giacomo

The image used as background for this page shows the coat of arms of Cingoli: two stags at the sides of a European yew standing upon three hills. It was first used in the XVth century and it symbolizes the wooded mountain upon which Cingoli was founded.