in the Churches of Rome
(Canopy in S. Maria della Traspontina)

Bernini's pictorial approach to sculpture cannot be dissociated from two other aspects, colour and light, which require special attention. Polychrome marble sculpture is rather exceptional in the history of European art. The link with the uncoloured marbles of ancient Rome was never entirely broken. (..) But during the late sixteenth century it became fashionable in Rome and elsewhere to combine white marble heads with coloured busts, in imitation of a trend in late antique sculpture. The naturalistic element implicit in such work never had any attraction for Bernini. (..) But in a different sense polychromy was extremely important to him. He needed polychrome settings and the alliance of bronze and marble figures as much for the articulation, emphasis and differentiation of meaning as for the unrealistic pictorial impression of his large compositions. It may be argued that he followed an established vogue. To a certain extent this is true. In all the large works from the middle period on (..) colour symphonies become increasingly opulent and impressive. Witness the tomb of Maria Raggi with its sombre harmony of black, yellow, and gold; or the wind-swept colourful stucco curtain behind the Constantine. (..) Witness the jasper palls which he used only in such late works as the Lodovica Albertoni and the tomb of Alexander VII. (..) With his revolutionary approach to colour and light, Bernini opened a development of immeasurable consequences.
Rudolf Wittkower - Art and Architecture in Italy 1600-1750 Penguin Books 1958 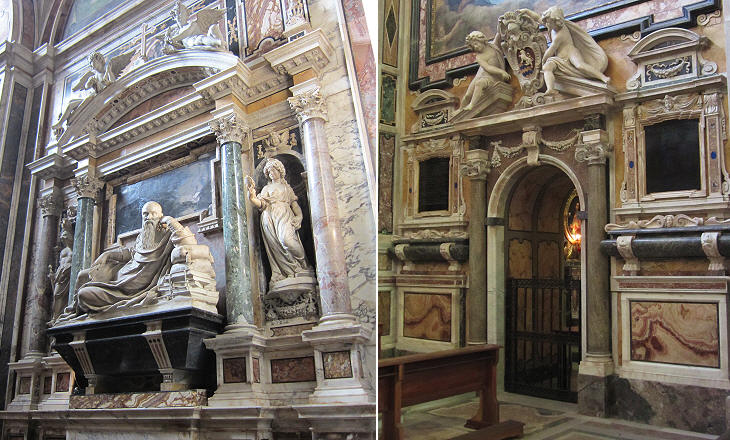 It is almost impossible for a man to form, in his imagination, such beautiful and glorious scenes as are to be met with in several of the Roman churches and chapels; for, having such a prodigious stock of ancient marble within the very city, and, at the same time, so many different quarries in the bowels of their country, most of their chapels are laid over with such a rich variety of incrustations, as cannot possibly be found in any other part of the world. And notwithstanding the incredible sums of money which have been already laid out this way, there is still the same work going forward in other parts of Rome, the last still endeavouring to outshine those that went before them.
Joseph Addison - Remarks on several parts of Italy, in the years 1701, 1702, 1703
Coloured marbles and granite (the material used for the obelisks) could not be used for obtaining mortar and in some cases they were too hard to be reworked and transformed into something else: this explains why they were widely available to Renaissance and early Baroque architects and sculptors. The first example of ample use of coloured marbles can be seen in the chapel built named after Sixtus V in S. Maria Maggiore. Pope Clement VIII followed the example of his predecessor and the chapel he dedicated to his parents shines with all sorts of marbles: the design of the monument to his father follows a typical Renaissance pattern: an architectural structure provides a frame for the statue of the dead and the virtues associated to him. Silvestro Aldobrandini, the Pope's father is portrayed in a traditional posture (more on this): what is new is the choice of clear and brilliant coloured marbles.
Cappella Rucellai, designed just a few years later, would make happy any mineralogist: its walls are almost a catalogue of the different marbles of Ancient Rome.

(left) Apse of S. Caterina da Siena a Magnanapoli by Melchiorre Caffà (1665); (right) detail of the balustrade of Cappella Colonna in SS. Apostoli

Large unbroken columns after a while became scarce, but for more than a century architects and sculptors could rely on an ample supply of precious stones to decorate the walls of Baroque churches: the introduction of gilded bronze and a careful matching of colours led to more elaborate effects.

Improvements in the stucco technique provided a versatile material which was often used in conjunction with marbles and stones: in some cases it was shaped, painted and gilded in such a skillful manner that it provided a very rich decoration on its own. In most cases the decoration of a chapel was led by an architect, who coordinated the activity of sculptors, painters, stone-cutters, masons, etc. In case of funerary monuments added to existing chapels the leading role was usually assigned to a sculptor, as in the examples shown above. 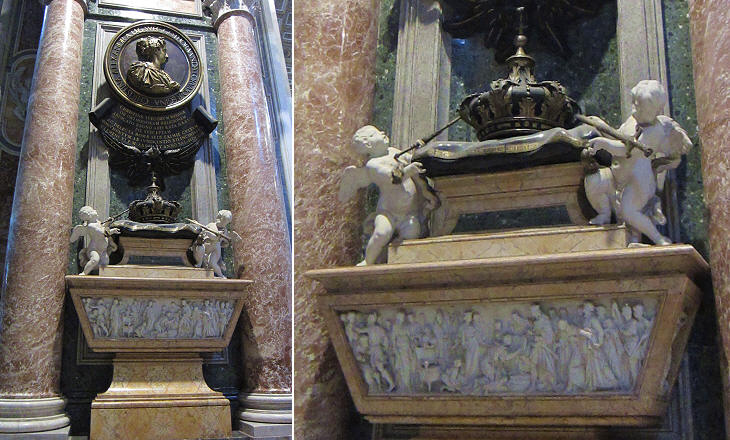 Monument to Queen Christina of Sweden (1702) by Carlo Fontana and Jean-Baptiste Théodon in S. Pietro

At the death of Gian Lorenzo Bernini in 1680, his pupil Carlo Fontana became the leading architect in Rome and he was commissioned a large monument to Queen Christina of Sweden to be placed in S. Pietro, next to the monument to Countess Matilda of Tuscany designed by his master. Bernini had filled the vertical space assigned to the monument with three objects: a sarcophagus on a pedestal, the (standing) statue of the countess and a large coat of arms.
Fontana realized that by following the same design he would have given an excessive role to the sculptor of the statue and decided on a very different approach which in a way followed the pattern of other works by Bernini, i.e. the use of bronze elements in combination with white and coloured marbles.
His hopes of having opened a new path were short-lived: the monument was soon nicknamed l'orologio (the clock) and regarded as Fontana's great missed opportunity. 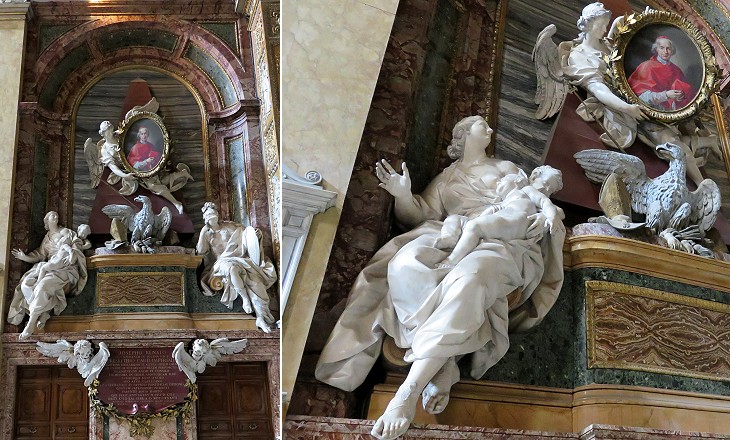 Monument to Cardinal Giuseppe Renato Imperiali (1741) by Paolo Posi and Pietro Bracci in S. Agostino (see a detail of it in a page on the Representation of Death in Baroque sculpture)

Pietro Bracci was the last great sculptor of the Baroque period in Rome, but in most cases his activity was coordinated by an architect; in the monument shown above his sculptures were included in a structure devised by Paolo Posi, an architect who was a specialist in ephemeral structuresbuildings such as the Macchine della Chinea (*) or the catafalques used for the funerals of the popes: they were made of timber and papier maché which allowed the most extravagant design. Examples of Posi's skills can be seen in the lavish monument to Cardinal Giuseppe Renato Imperiali and in the monument to Flaminia Chigi Odescalchi.
(*) Chinea is the name given to a ceremony during which the King of Naples (or the chief of the Colonna family on his behalf) presented a white horse to the pope, in recognition of his supremacy. The ceremony included fireworks launched from an ephemeral structure (Macchina della Chinea) erected in Piazza SS. Apostoli before Palazzo Colonna. 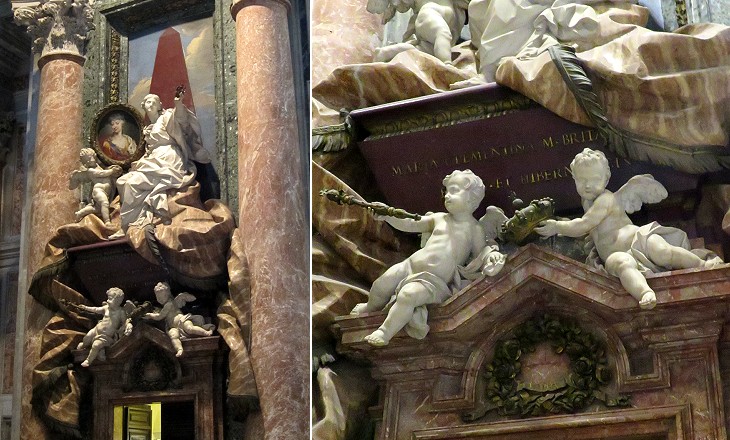 Pietro Bracci worked almost at the same time at another greatly coloured monument dedicated to Queen Maria Clementina Sobieska: a quite peculiar queen indeed: according to the inscription on her coffin she had been the Queen of Britain, Ireland and France, but she never set foot in her kingdoms. The Sobiesky, after the death of John III Sobiesky, King of Poland, had to abandon their kingdom and they set their residence in Rome, where Maria Clementina married James Francis Stuart (James III for the Jacobites, the party who after the 1688 revolution in Britain, continued to support the Stuart dynasty), thus acquiring the title shown on her coffin.
The lower part of the monument, designed by Filippo Barigioni, shows two angels playing with the regal insignia, a subject which appears also in Carlo Fontana's work.
The young woman holding a mosaic, based on a portrait of the queen now in Edinburgh, is a personification of Charity, definitely the virtue most often represented in XVIIIth century monuments: the rich tried in this way to justify their enormous wealth in a society where their role was starting to get challenged.

Monument to the last Stuarts (1817-19) by Antonio Canova in S. Pietro (see see a detail of the two angels in another page)

The monument which stands opposite that of Queen Maria Clementina is dedicated to her husband and her two sons, Charles Eduard, the Young Pretender, and Henri Benedict who became a cardinal and who was the last of the Stuarts. But the two monuments have just this family link in common.
Antonio Canova had become so famous and Pope Pius VII was so grateful to him for his many contributions to the papal state as a sculptor, as an archaeologist and as a diplomat (he had managed to recover most of the papal collections taken by Napoleon), that he was allowed not to "fill" the entire space assigned to him. In line with Neoclassicist fashion he refrained from using coloured marbles.


The image used as a background for this page shows the monument to Pope Gregory XV in S. Ignazio.