- Delos - The Theatre's Quarter
(Venus and Pan, now in Athens)

If you came to this page directly, you might wish to read a page on the sanctuaries of Delos first. 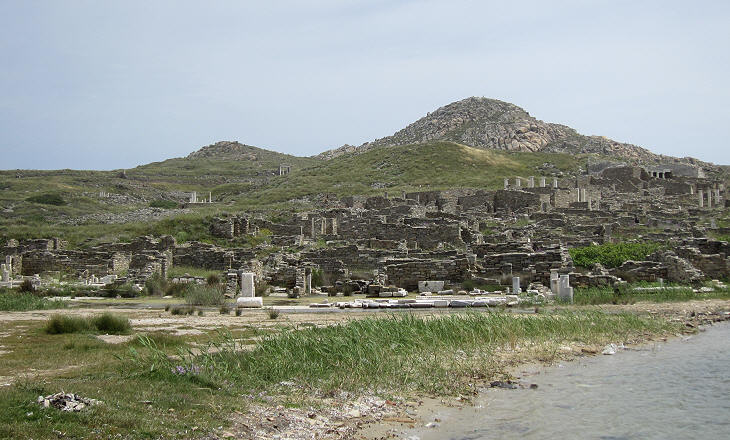 View of the Theatre's Quarter from the commercial harbour and in the background Mt. Cynthus

Delos had a period of great growth in the second half of the IInd century BC when the Romans promoted its development as a trade centre and in particular as a slave market; many merchants established their permanent residence on the island and built their homes around an existing theatre in an area south of the commercial harbour. 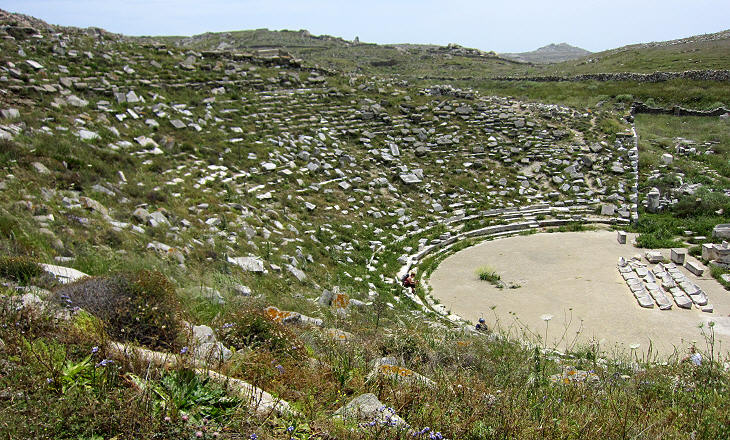 Inscriptions found at the sanctuaries of Apollo and detailing the activities of the priests indicate that in origin the theatre had a wooden structure; its construction started in ca 275 BC and it was completed during that century. 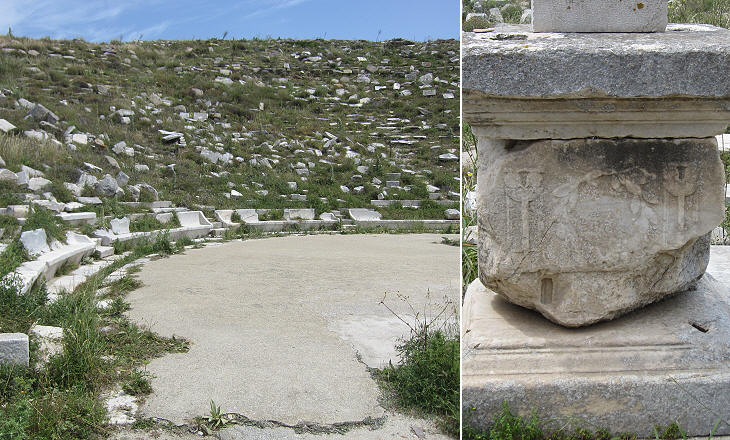 (left) Theatre seen from the stage; (right) a relief showing a laurel wreath

A stone proscenium, which restricted the circular area of the orchestra (typical of Greek theatres) was built in the second century BC; it is thought that the theatre could seat an audience of some 5,500; initially performances were strictly associated with religious ceremonies, but starting from ca 150 BC ordinary plays were staged. 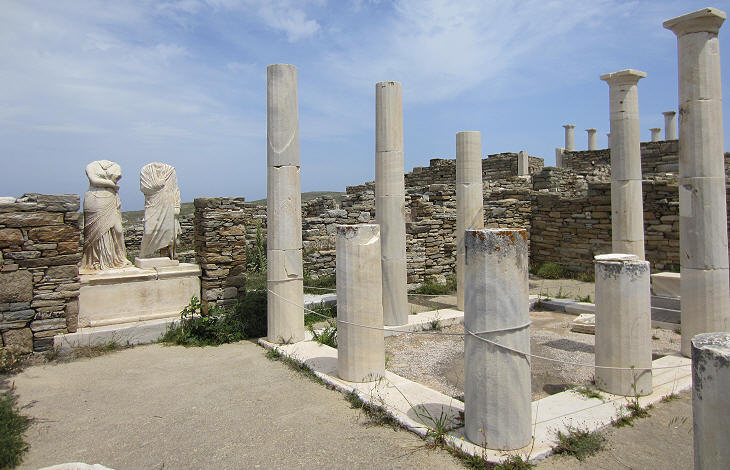 In 1906 French archaeologists (to whom we owe all the excavation of Delos) discovered a group of large houses on the slope below the theatre; in one of them they found the headless statues of the owners, Dioskourides and his wife Cleopatra, a couple from Athens; they were erected in 138 BC by Cleopatra after the death of her husband; French archaeologists chose to name the house after her, a decision which increases the number of visitors, but disappoints those of them who believed there was a link between the location and Cleopatra VII, the famous Egyptian queen. Cleopatra is a Greek name meaning "glory of her father". 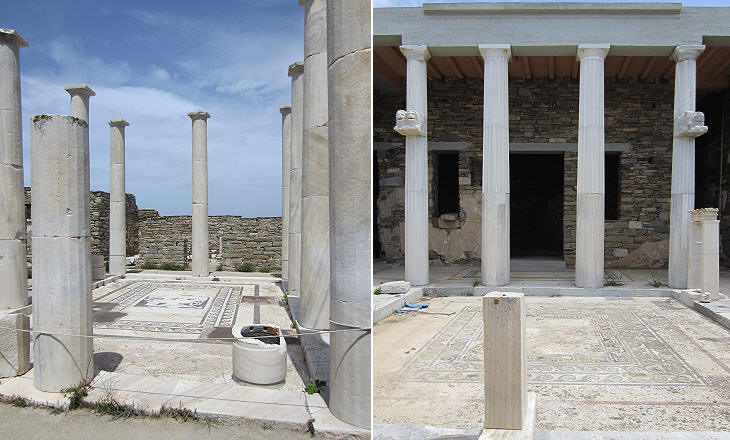 The houses of Delos, at least the main and most interesting ones, followed the type common in Hellenistic times and they were designed around a central court frequently surrounded by a peristyle, a columned portico. In some cases the columns were embellished by decorated consoles; in the House of the Trident the consoles support lion and bull heads, thought to represent Phoenician deities. The image used as background for this page shows the lion heads of a console of this house. 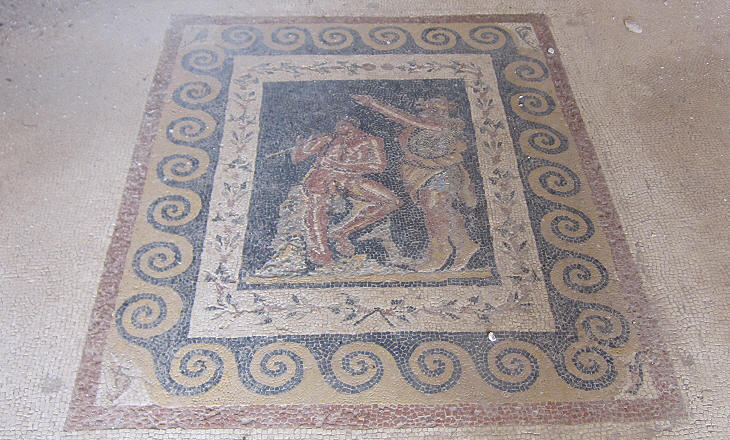 House of the Dolphins: mosaic portraying a flute player near a Silenus

Characteristic of the Delian houses was the oikos, or broad room, opening off the peristyle; it was certainly used for the reception and entertainment of guests; the more richly decorated floors were usually found in these rooms and in the section of the peristyle through which guests would pass to reach them. The commonest design of the mosaics consists of a square or rectangular central carpet-like tessellated area while the rest of the floor was decorated in a simpler technique. The "carpet" had a central scene surrounded by multiple frames, usually showing geometric motifs. 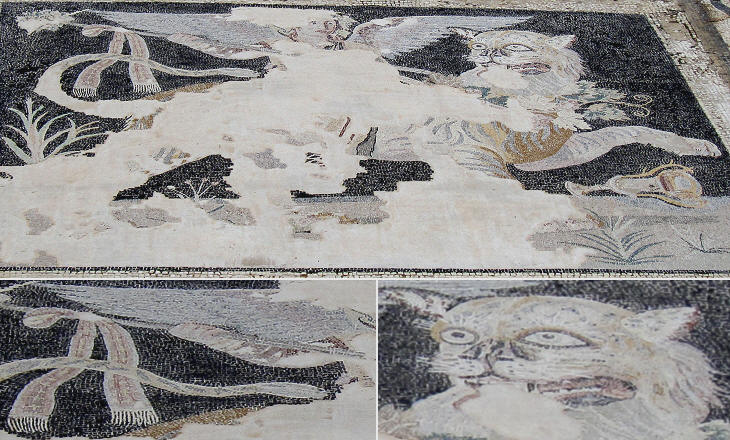 Mosaic portraying Dionysus at the House of Dionysus

The mosaic depicts the god with outstretched wings and ivy wreath, mounted on a panther with a wreath of vine branches and grapes around its neck. In his right hand the god grasps a thyrsus, a staff crowned with ivy, as if it was a spear. On the ground, between plants, a kantharos, a wine vessel, another attribute of the god of wine.
The wings suggest a Dionysiac daimon, a supernatural being acting as an intermediate between gods and men, rather than the god himself; the Greek term does not have any connotations of evil or malevolence.
The artist exploited to the full the colouristic possibilities of the technique with minute tesserae; the materials used included not only natural stone and terracotta, but also artificial materials such as glass and faience. 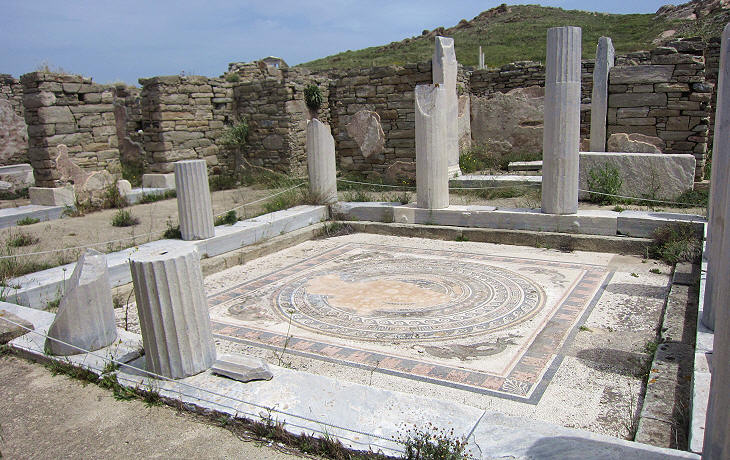 House of the Dolphins: courtyard

The mosaic which embellished this house has a circular format, unusual for Delo; in the corners between the square frame and the central design showing a complex rosette are pairs of dolphins ridden by tiny winged figures carrying emblems of various gods: the mosaic is signed by Asklepiades, a Phoenician from Arados. 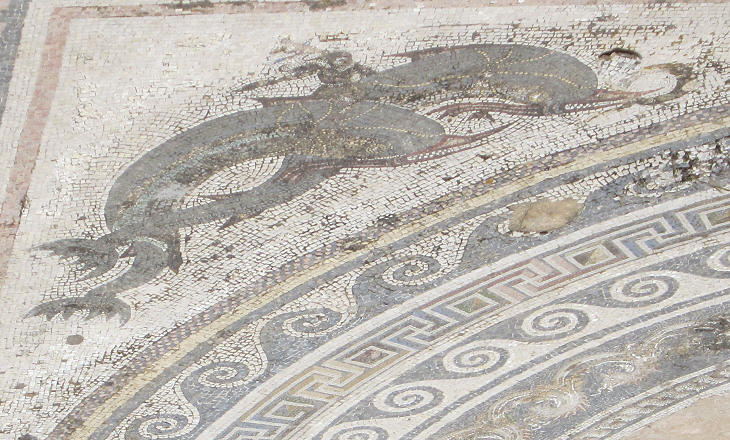 House of the Dolphins: detail of the mosaic in the courtyard

The development of mosaics made with with coloured tesserae is generally set in the IInd century BC; prior to that period black and white pebble mosaics were employed for the decoration of pavements; the move from pebbles to squared tesserae occurred at almost the same time in different areas of the Mediterranean basin such as Egypt, Sicily and Delos; the mosaics of the Theatre's Quarter are therefore of great importance to understand the early development of this new form of art. In the area above the Theatre archaeologists found a second house decorated with a mosaic portraying Dionysus; they called it House of the Masks or of the Comedians because of some mosaics showing theatrical masks. The size and decoration of the House of the Masks suggest that it was not an ordinary dwelling.
The mosaic shown above is relatively small and it is located inside a room and not in the courtyard; similar to Apollo, also Dionysus was often portrayed almost as a woman; it is known that it was not unusual for Dionysian priests to wear female attire.
It appears that the two mosaics representing Dionysus and some other ones have been made separately, probably on the island, but in an artist's workshop. 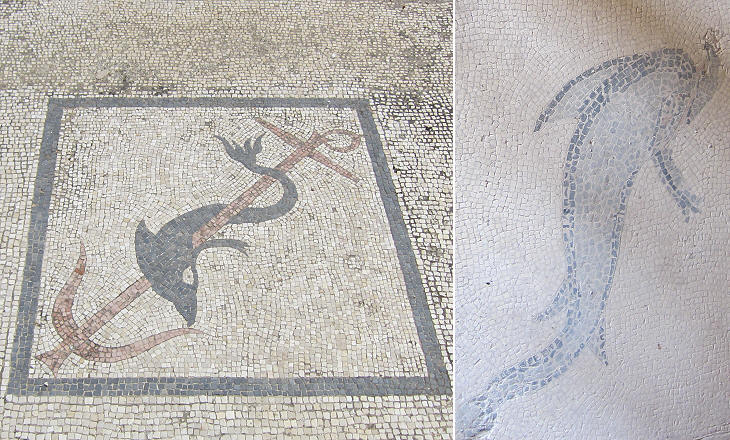 The development of Hellenistic mosaics ended with the decline of Delos which started in 88 BC when a fleet of Mithridates VI, King of Pontus, attacked the island, killed or enslaved its population, looted the sanctuary and destroyed the city. In the following year the Romans retook Delos and aided in its rebuilding. In 69 BC Delos was sacked by pirates; the Romans reacted by waging a veritable war on the pirates which was won by Pompey and in 66 BC they built a fortification wall around the city of Delos. The sanctuary and the island as a trade centre however declined after these events and by the IInd century AD Delos was all but abandoned. 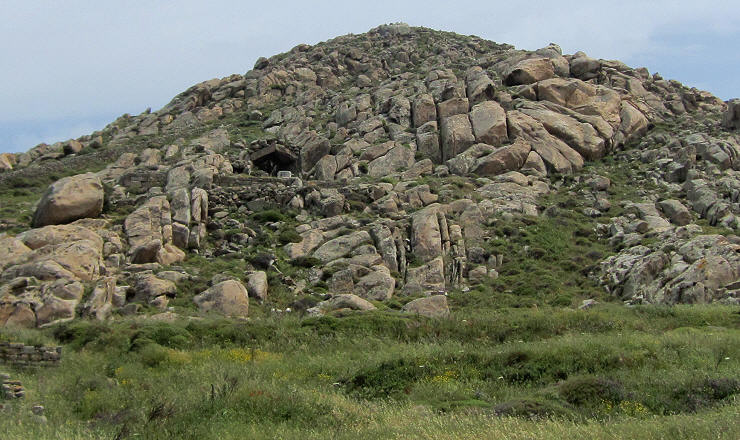 Mt. Cynthus lies behind the Theatre's Quarter and today it is a barren rock; according to the Greek myth however Leto bore Apollo on this site between an olive-tree and a date-palm.
A sacred cave near the top of the hill was probably where oracles were delivered (although by far the most famous oracle of Apollo was that of Delphi); eventually the cave was dedicated to Hercules, who similar to Dionysus, was a rising star in the religious firmament in the Hellenistic period. 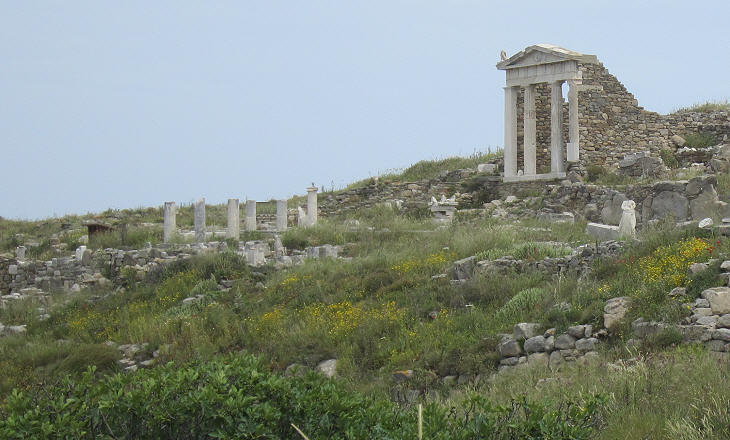 The area between the Theatre's Quarter and the top of Mt. Cynthus was regarded as a holy place and temples were erected there by the cosmopolitan population of Delos on the so-called Terrace of the Foreign Gods. Archaeologists have reconstructed the façade of a small temple to Isis. Other temples were dedicated to Phoenician deities and to the Great Gods of Samothrace, so almost all the Eastern Mediterranean pantheon was worshipped at Delos. 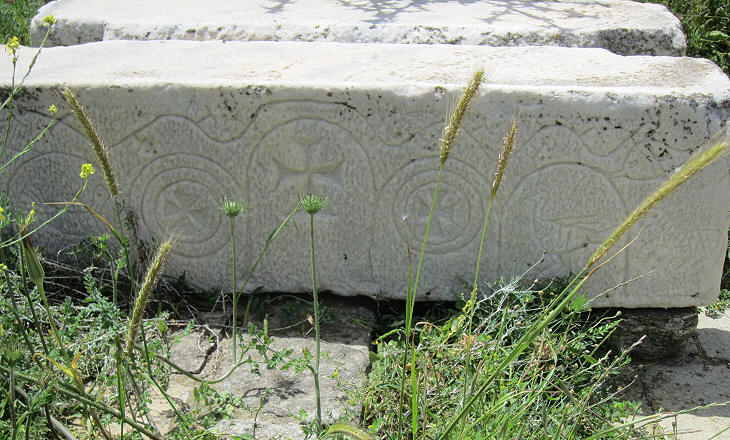 Christian symbols in the Theatre's Quarter

Whatever population still resided at Delos and provided services to the rare visitors of the sanctuaries, left the island after 392 AD when Emperor Theodosius ordered the closure of all pagan temples. 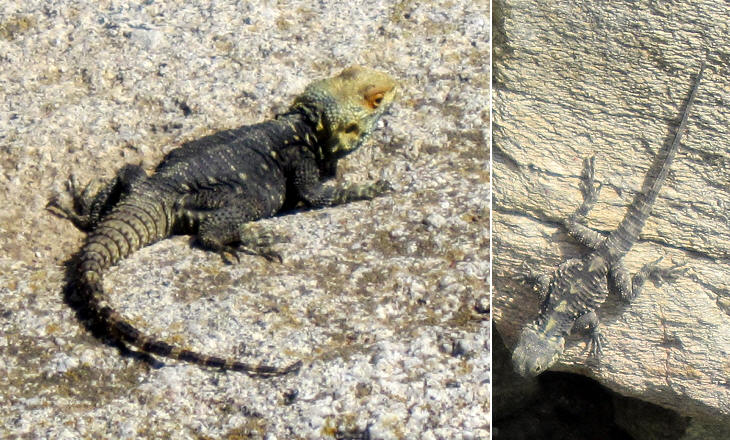 Stellions (Laudakia Stellio) today's inhabitants of Delos; according to Ovid these lizards originate from a boy who derided Ceres and for this was turned by the goddess into a lizard

Return to page one: The Sanctuaries