"The day was cloudless and warm. I went with Tischbein to the square in front of St. Peter's. We walked up and down until we felt too hot, when we sat in the shadow of the great obelisk - it was just wide enough for two - and ate some grapes we had bought nearby." (J. W. Goethe Italian Journey, November 22, 1786)
"To have beautiful warm weather, with only an occasional rainy day, at the end of November is a new experience for me. We spend the fine days out of doors, and always find something to enjoy, to study or to do." (Id. December 2)
"Except for four rainy days, all through February the sky has been cloudless, and in the middle of the day it is almost too warm. Everyone prefers to be out of doors." (Id. February 17, 1787).
In Rome it is possible to live in the open air for most of the year and have at least lunch outdoors. A trattoria is a necessary component of a Roman piazza. Whether in the grand scenery of Piazza Navona or in a more secluded spot one can combine enjoying the sunshine with the pleasure of eating in a historical setting. 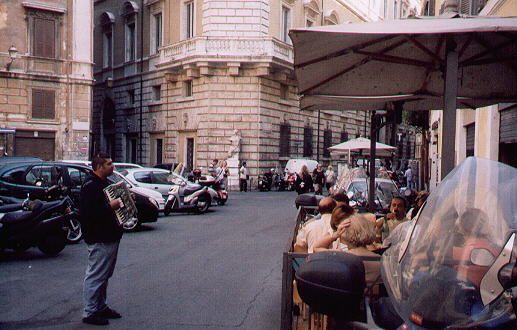 A busker in Piazza di Pasquino

Maybe not all those who listen to this busker who sings O Sole Mio in Piazza di Pasquino have read the three pages Marcel Proust wrote (Albertine disparue) to describe his feelings when, sitting at a cafè in Venice, he heard once again this song (also known as It's Now or Never, a hit by Elvis Presley). Buskers without the tenor voice required by O Sole Mio, sing Arrivederci Roma, a sort of tour of Rome's most popular monuments.

Italian cooking has a great number of regional versions and Roman cooking too has a couple of additional versions coming from its historical quarters: Cucina del Ghetto, influenced by the Jewish kosher rules and based on fried vegetables, in particular Carciofi alla Giudia (fried artichokes) and Cucina Testaccina developed in Testaccio, where the slaughterhouse of Rome was located from 1891 till 1975; it is based on the parts of the cattle which were thought to be of no value and were sold at a very low price to the inhabitants of the quarter.

Be a millionaire for one day: breakfast near Piazza del Popolo, lunch at Casina Valadier and dinner near S. Maria sopra Minerva

There are some hotel chains that pride themselves on making their customers feel at home. To accomplish this mission they furnish their hotels exactly in the same way whether they are located in Agra or Kyoto, Rome or Moscow, Jerusalem or Istanbul. To make sure the customer feels at home the rooms and the corridors are decorated with the same XIXth century prints portraying birds and flowers. The customers who in the end do not have this desire of "being at home", often choose to take their meals in the courtyard or on the roof garden and not in the air conditioned restaurant with international cuisine. 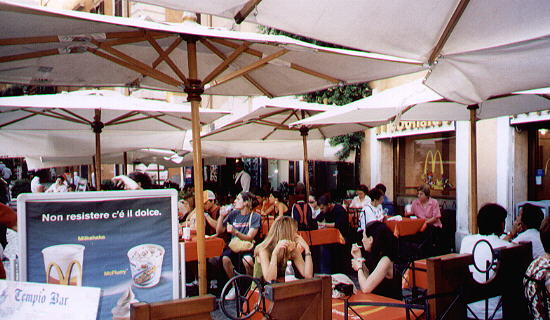 In Italy, 90% of restaurants and trattorias are a family business and do not offer standardized meals. There are, however, some fast food chains where the homesick can take refuge. 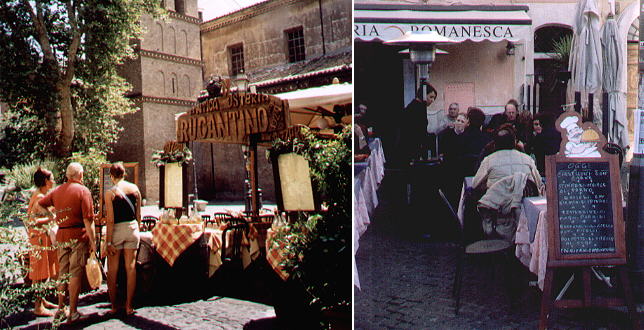 Pondering menus near S. Crisogono and in Campo de' Fiori

Romans go very often to restaurants, which means that there are restaurants in every part of Rome and that businesses do not rely only on tourists. Prices obviously vary greatly, but are lower than those in comparable restaurants in Milan, Venice or Florence. 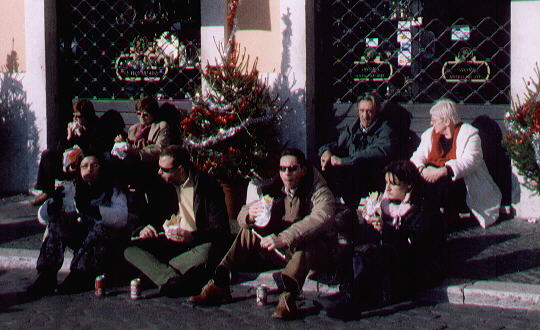 The image used as a background for this page is a detail of Giuseppe Vasi's Grand View of Rome.

Other Days of Peace pages:
A Sunny Day in Villa Borghese
At the Flea Market
At the Beach
Voicing Your Views ..... and feeling better
A visit to Roseto di Roma
Christmas in Rome
Celebrating the Foundation of Rome
The procession of La Madonna de Noantri
Running the Marathon
Watching the Parade
Finding Solace at the Protestant Cemetery
Attending 2007 July Events
Rome's Sleepless Night
Attending Winter Ceremonies
Jogging at Valle delle Camene
Sailing on the River to see the Bridges of Roma
An October Outing to Marino
Attending a Funeral ...and enjoying it!
A Special Spring Weekend
Embassy-hunting in Parioli
Celebrating Eritrean Michaelmas in Rome
Visiting Rome at Dawn
Visiting Rome in the Moonlight
Visiting Rome on a Hop-on-Hop-off Bus
Visiting Multi-ethnic Rome
Baroque Fireworks
Playing in the Snow at the Janiculum
Watching the Pride Parade
Visiting the Movie Sets at Cinecittà
Reading Memoirs of Hadrian at Villa Adriana
Looking up at the Ceilings of the Vatican Palaces
Reading Seneca at the Baths
Spending the Last Roman Day at St. John Lateran's Cloister
Reading Ovid at St. Peter's
Walking the Dog at Valle della Caffarella