- Archaeological Museum of Ephesus
(inscription in the Library built by Consul Julius Aquila to celebrate
his father Julius Celsus Polemenus, proconsul of Asia)

You may wish to see the pages on the ancient town first. Feminists have been seeking evidence of powerful goddesses and of the time when the feminine principle ruled. They need only look to Turkey, where it reached its grandest, most distinctive and most influential form in Ephesus. Here was the home of Diana of Ephesus, who was worshiped across most of Europe. She is still present in her city, at least at the museum, in the guise of two strange, compelling and peculiarly awesome statues of the first and second centuries A.D. Many museums have images of her, but Ephesus was her headquarters, and her temple there was one of the seven wonders of the ancient world.
From The New York Times - August 21, 1994 - Vicki Goldberg - In Search of Diana of Ephesus 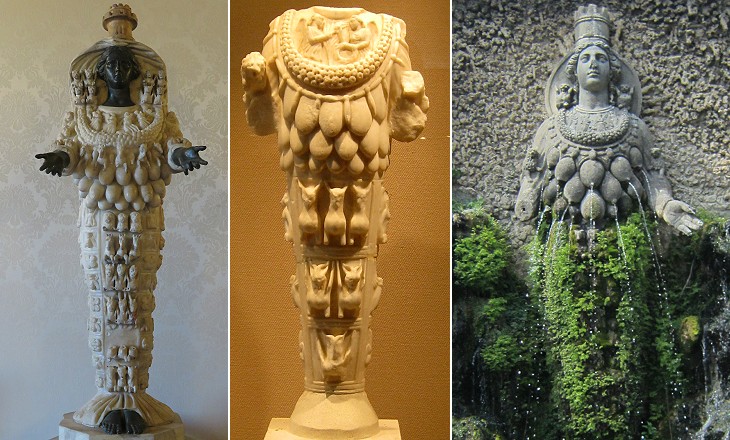 The goddess was portrayed with multiple breasts, a symbol of fertility. Gillis van den Vliete (aka Egidio della Riviera), the Flemish sculptor who made the statue at Villa d'Este had no doubt about it and the nipples of the goddess were used as spouts for a fountain. Actually nipples are noticeable only in Vliete's statue and some scholars recently suggested that the supposed breasts are instead bull's testicles. Co-opt: verb; adopt (an idea or policy) for one's own use (from The Concise Oxford English Dictionary). This definition can help in understanding the approach often followed by the ancient Greeks and Romans in dealing with cults of lands they had conquered or had fallen into their sphere of influence. They believed that the gods of their enemies were not necessarily a danger for them, but rather a potential resource. It is likely that in origin the Ephesians worshipped a Mother Earth-type goddess, similar to Cybele whose cult was widespread in the Anatolian tableland. When the city became Greek in culture the goddess was renamed as Artemis, although the way she was portrayed was not that of the Greek virgin huntress, the Maiden by the Silver Bow. 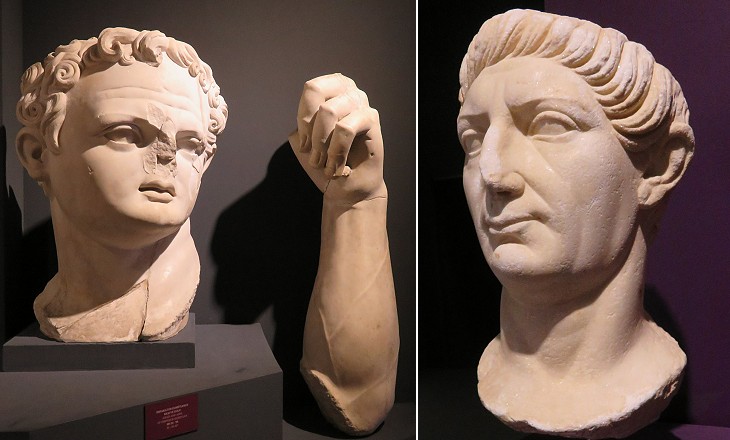 Large statues of emperors: (left) Domitian (from the Temple to the Emperors; (right) Trajan (from a fountain in the Upper Town)

The fact that large statues of Roman emperors and their wives were placed in baths, fountains, tribunals and temples has supported the opinion that they were worshipped as gods. It does not appear that the divinized emperors were asked to perform miracles or to predict the future. The ceremonies held at their temples were similar to those which occur in many countries on national day holidays. 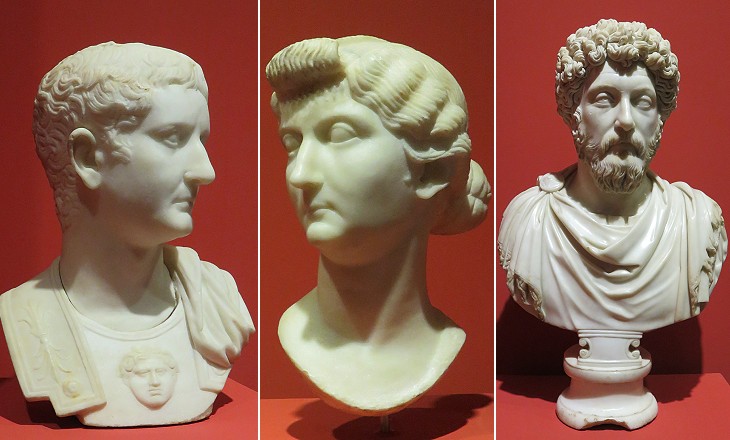 Because the Roman statuary was not an idealized one it reflected the changes in hairstyle fashion. The members of the imperial family are easily identifiable because of their faces which appeared on coins. Their portraits help archaeologists in dating statues and busts of unknown personages by their hairstyles (and beards). 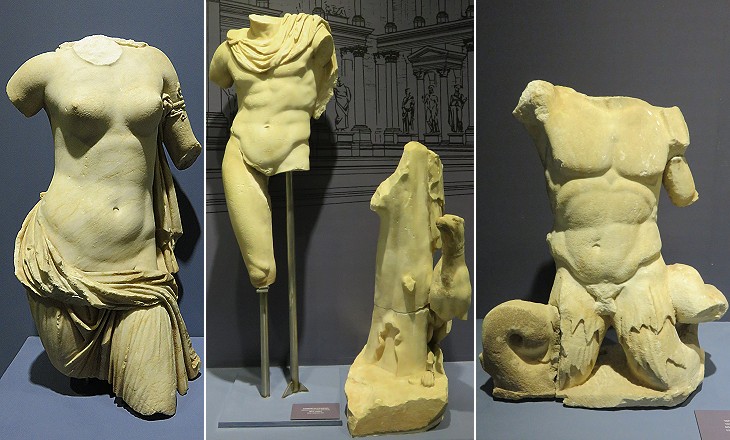 Statues which decorated Trajan's Fountain: (left) a nymph; (centre) Androclus, a hunter and the mythological founder of Ephesus; (right) a triton

Medieval towns in western Europe competed for having the largest cathedral or the tallest bell tower. Apparently in the IInd century AD the towns of the Province of Asia competed for having the most imposing and richly decorated nymphaea (fountains). Actually the fountains celebrated the completion of major aqueducts, facilities which radically improved the living conditions of the inhabitants. Imposing nymphaea have been found at Sagalassos, Aspendos, Side, etc. 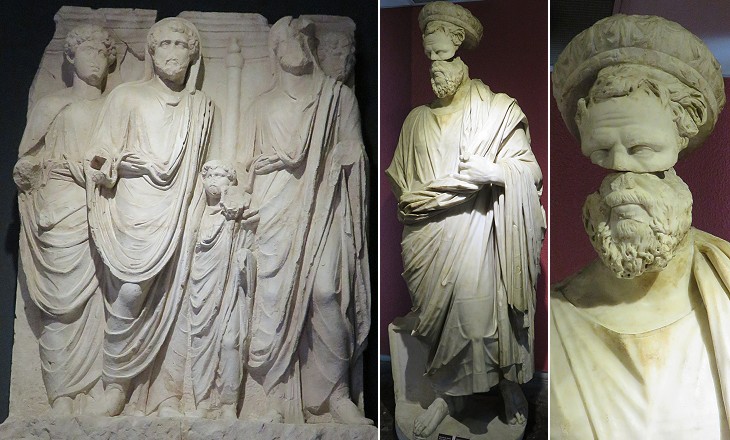 In 1895 the Austrian Archaeological Institute began excavations at Ephesus. Its activity was rewarded by the unearthing of many important monuments of the town. The reliefs which decorated an altar celebrating the 161-166 AD Roman war against the Parthians were donated by Sultan Abdul Hamit II to Emperor Franz Joseph I. The Roman army was led by Co-emperor Lucius Verus who in 164 married Lucilla, Marcus Aurelius' daughter, at Ephesus. One of the reliefs is of particular interest as it shows Hadrian (far right) adopting Antoninus (second left) who in turn promises to adopt Marcus Aurelius (a very young man - far left) and Lucius Verus (a boy - second right). The event occurs during a religious ceremony and the scene strongly recalls the procession of the imperial family at Ara Pacis Augustae in Rome.
Flavius Damianus was one the wealthy citizens of Ephesus who hosted Lucius Verus during his stay in the city. He was formally responsible for the ceremonies related to the cult of the Emperors. He was the son-in-law of Publius Vedius Antoninus, another very wealthy citizen of Ephesus who built a gymnasium and an odeon. (above) Frieze from the Temple to the Emperors; (below) a similar frieze in the garden of the museum

In general Ephesus was not embellished with statues and friezes having a military subject. At the peak of the wealth of their city its inhabitants were only worried about sea storms which could sink their ships, but Lucius Verus came back from his victorious campaign against the Parthians with an unexpected trophy: a pestilence (most likely smallpox) which spread throughout the Roman Empire, the first one of a long series. A bronze snake and three dolphins

The Archaeological Museum of Ephesus reopened in November 2014 after a very extensive renovation. Its exhibits are the result of findings which occurred after 1929, because before that year statues, reliefs and other works of art ended in the collections of the British Museum in London, the Ephesos Museum in Vienna and the Archaeological Museums of Constantinople and Izmir (not to mention many private collections). The exhibits shown above mainly come from private houses. They indicate the favour enjoyed by dolphins among the ancient Greeks and Romans. The following passage explains why boys were often portrayed riding dolphins.
That dolphins are affectionate and amorous is shown, not only by ancient history, but also by tales of recent date. For in the sea of Puteoli, during the reign of Augustus Caesar, as Apion has written, and some centuries before at Naupactus, as Theophrastus tells us, dolphins are positively known to have been ardently in love. And they did not love those of their own kind, but had an extraordinary passion, like that of human beings, for boys of handsome figure, whom they chanced to have seen in boats or in the shoal waters near the shore.
Aulus Gellius (ca 125-180 AD) - Attic Nights - Book VI:8 - Translation by John C. Rolfe.
You may wish to see some very fine mosaics at Bulla Regia in Tunisia. 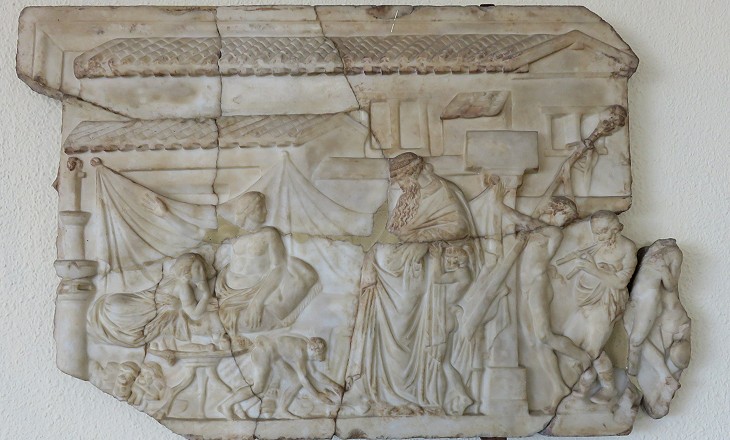 This relief catches the eye because Dionysus is not portrayed as a naked young man under the effect of wine, but as a bearded old man in a long robe, yet, similar to his other self, he is followed by dancing satyrs and maenads. He brought wine to his friend Ikarios, but according to the myth he gave it to Ikarios' servants too. They became drunk and killed their master. An identical relief was part of the Albani Collection and the god was portrayed in a similar way in a krater at Paestum. 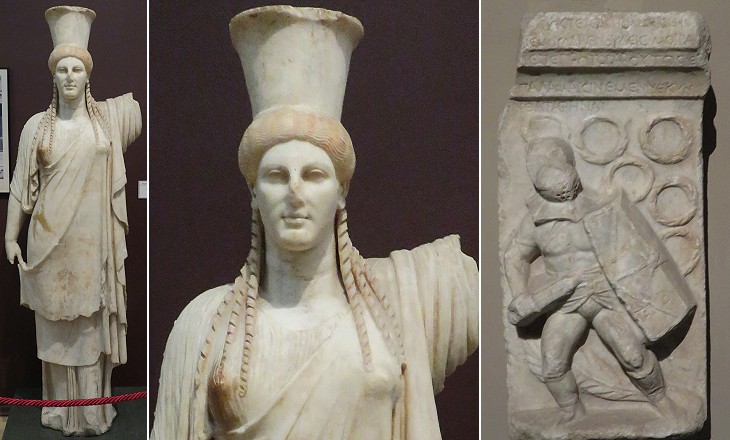 Archaeological Museum of Istanbul: exhibits from Tralles (today's Aydin, a town near Ephesus): (left/centre) archaic caryatid (copy made in the Ist century BC or Ist century AD), you may wish to see the caryatid found at Eleusi; (right) gravestone of a gladiator, another relief portraying a gladiator is shown in the image used as background for this page

We travelled nearly fifty miles in a south-easterly direction (from Ephesus), through frequent storms of rain, to Aidin, the ancient Tralles, where we arrived on Friday the 5th of May. Of the old town there remains only enough to show that it occupied the elevation which overlooks the present city.
Charles Fellows - Journal Written during an Excursion in Asia Minor in 1838