- Gortyn
(Painting showing a bull-leaping exercise found at Knossos, now at the Archaeological Museum of Iraklion)

Next, eighty barks the Cretan king commands,
Of Knossus, Lyctus, and Gortyna's bands;
And those who dwell where Rhytion's domes arise,
Or white Lycastus glitters to the skies,
Or where by Phaestus silver Jardan runs;
Crete's hundred cities pour forth all her sons.
These march'd, Idomeneus, beneath thy care,
And Merion, dreadful as the god of war.

Homer - The Iliad - Book II (Catalogue of the ships sent to the War of Troy) - Transl. by Alexander Pope 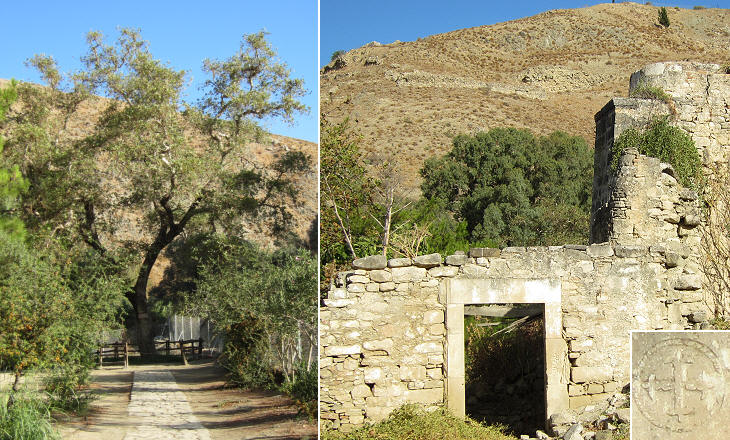 (left) Mythical plane tree; (right) nearby Venetian mill built utilizing stones of previous buildings and in the background the acropolis of Gortyn

In the plain about ten miles from the sea, the famous city of Gortynia was situated. (..) Homer mentions it as a walled city; but the walls were afterwards destroyed: The circumference of the old city, according to Strabo, seems to have been six miles and a quarter; but it appears to have increased very greatly. (..) All over the fields there are heaps of stone.
Richard Pococke - A Description of the East and Some Other Countries - 1745.
July 1795. Gortyna is in the largest and finest plain of the island, opening at one end to the southern sea; it is rather fertile than picturesque, but now is thinly inhabited and ill cultivated. There is little to see here: old, prostrate columns, ornamented fragments, well-known inscriptions, and a stripped theatre as usual. The little river Lethe, which crosses it, still, as of old, overgrown with plane trees, and the shade famous for the amours of Jupiter and Europa, we looked at with more interest, as it applied more to our fancy than our eyes.
The letters of John B.S. Morritt of Rokeby descriptive of journeys in Europe and Asia Minor in the years 1794-1796.
Gortyn is located in the Mesara plain in the southern part of Crete; according to the Greek myth Zeus, disguised as a bull, abducted Europa, a young beautiful girl, from the shores of Phoenicia and he carried her to a plane tree near Gortyn. Here the god made an attempt to seize her, but Europa resisted and Zeus had to turn himself into an eagle to finally gain her acquiescence. The myth has had various interpretations; the most widely accepted one believes it is a metaphor for the invasion of Crete by Greek tribes from the continent. Ancient Gortyn was located on a hill, but its acropolis was turned into a fortress by the Byzantines and it was eventually destroyed by the Arabs in 823. 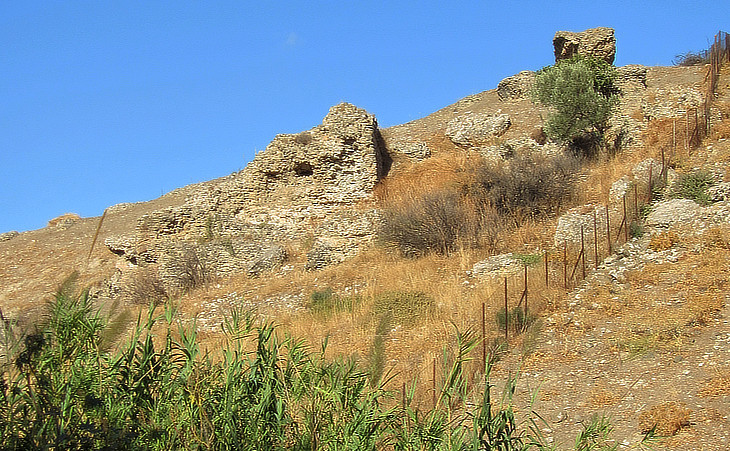 Ruin of a theatre

The nearest ruin to the village is a building which was doubtless either a theatre or amphitheatre, but it is almost entirely destroyed; (..) it was cased with large brick, the walls are four feet thick, and it was about a hundred and fifty feet in diameter in the area within. The arches on which the seats were built are twenty two feet deep and fourteen broad; there is another wall ten feet more to the west, and there seem to have been two square towers, as if designed for stair-cases; but I cannot certainly say whether there were any arches on this side; it does not appear that there were towers in any other parts: As the building is not large, I am inclined to think that it was a theatre. The common people call it a castle. Pococke
On an eminence was situated the acropolis, while below it, excavated in the hillside, was the theatre, which is now an almost shapeless mass of rubbish.
Henry Fanshawe Tozer - The islands of the Aegean Sea. Published 1890, but Tozer began his travels in 1874 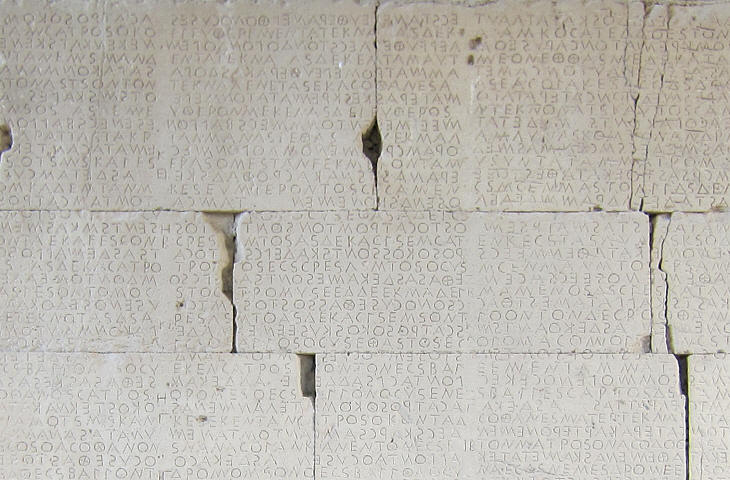 Gortyn became the main city of southern Crete at the expense of Phaistos and in 220 BC it extended its power over the northern part of the island by forcing Knossos to acknowledge its supremacy. Archaeologists have found a very long inscription in the early Greek language which contains a code of laws dealing with several matters varying from family rights to ownership of slaves and legal distinctions between social classes. The text (dated Vth century BC) is a rare example of "bustrophedic" writing (one line is left to right and the next right to left - see another example at Delphi). The code was carved on the pillars of a bouleuterion, a place for the meetings of the council of citizens; the stones were eventually reutilized for the construction of an odeon by the Romans (as it occurred at Iasos). 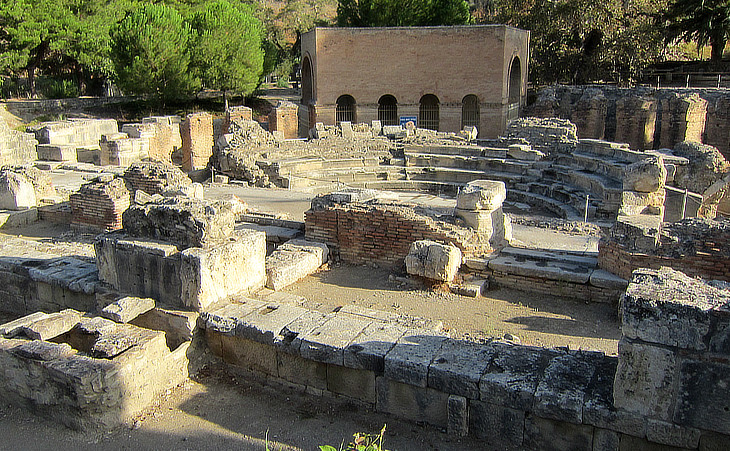 Odeon, a small theatre for poetry and music

During the IInd century BC the Romans acquired a growing influence in Greek matters; they initially acted as protectors of the Greeks against the Macedonian kings, but eventually their control over the country became more direct. The Aegean islands however retained some form of autonomous government. In 85 BC Silla defeated Mithridates VI, King of Pontus, a region of Asia Minor on the Black Sea. Trade routes between Rome and its Asian territories were not safe because of the presence of pirates who attacked Roman ships or those of their allies in the region. The pirates often used coves on Crete as their bases and sold their loot in Cretan towns. The Roman Senate ordered the Cretan towns to stop assisting the pirates; at their refusal in 68 BC a Roman army, led by Quintus Caecilius Metellus, landed on the island which was entirely conquered in the next two years. The pirates were eventually eradicated from their bases on the Asian coast by Pompey. 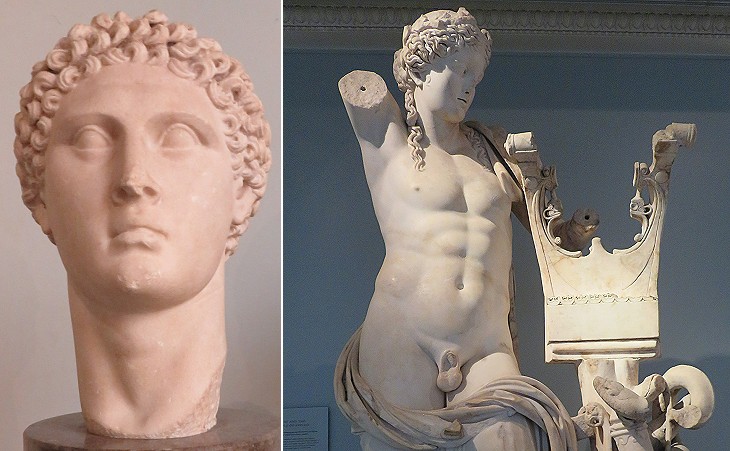 The ruins of Gortyna cover a large extent of ground, but none of them are either anterior to the Roman period, or in good preservation. Tozer
Gortyn sided with the Romans and it was soon rewarded by them. In 96 BC Ptolemy Apion, the last king of Cyrene, a Greek town in the eastern part of today's Libya, bequeathed his territories to the Roman Republic. In 20 BC Creta et Cyrenaica, a new province of the Roman Empire, was created and Gortyn was made its capital. This meant it was the residence of the governor and of the administration of the province. 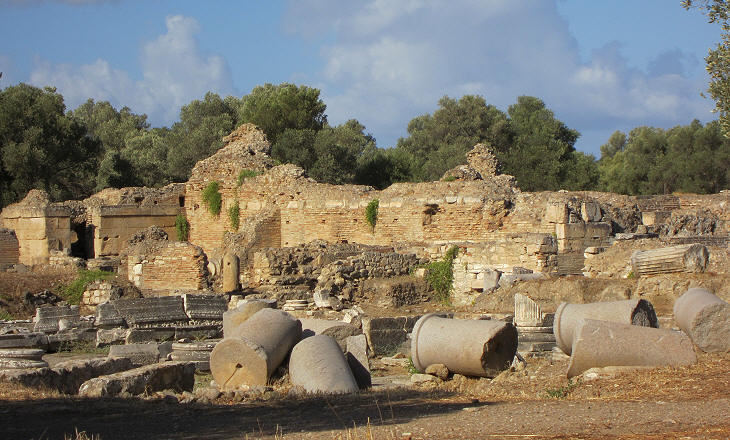 Where this aqueduct ends there are remains of some very considerable building, which probably was a praetorium, where they held their public assemblies; for on the stones that lie on the ground there are several defaced inscriptions to the honour of the magistrates: From some pedestals that remain I could see there had been eight columns, which probably were the remains of a portico round the building, the entrance seemed to have been to the south west; and the pedestals that remained on the north west were probably the portico on that side of the building. Pococke
The lower town at the foot of the acropolis was expanded into the Mesara plain. Today the ruins of the imposing buildings of this new part of the town are spread over an area of several square miles and are surrounded by olive trees. Similar to most Roman towns, Gortyn was supplied water by an aqueduct and it had large baths and some monumental fountains. 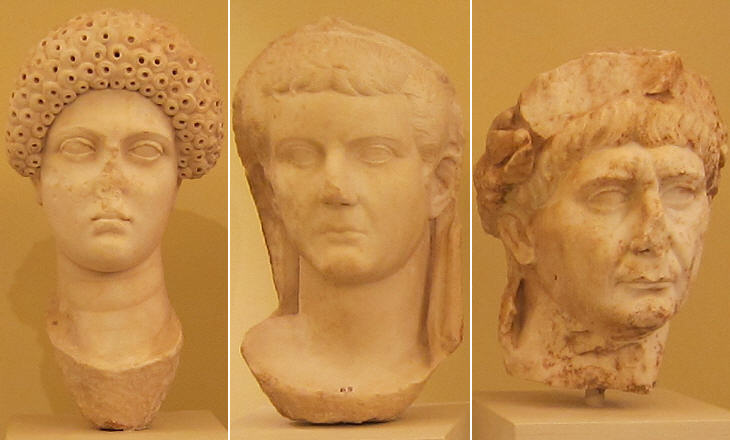 It is customary in most of today's countries to display an official portrait of the king/queen/president in public buildings; the same occurred in the Roman Empire, although statues were used instead of photographs (see a collection of busts of members of the imperial family at Toulouse). The portraits of the new emperors were very true to life and not too flattering. Archaeologists have found several statues of the emperors at Gortyn because of its role as the provincial capital. The citizens of Gortyn paid for the erection of statues of Marcus Nonius Balbus, their Roman governor, at Herculaneum, his hometown. 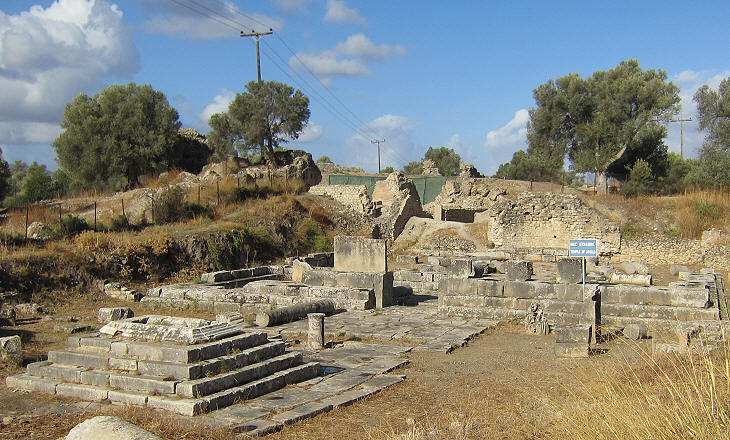 Gortyn was part of the Greek world and it had a temple dedicated to Apollo and more exactly to Apollo Pytius, the oracular god who was worshipped at Delphi. The temple was very old (VIIth century BC), but it was renovated and modified in the IInd century AD; games and events in honour of Apollo were held in a small theatre on the back of the temple. 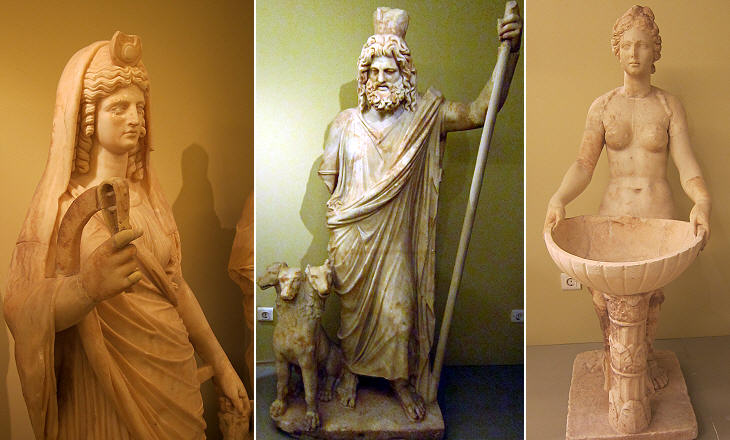 Archaeological Museum of Iraklion: statues found at Gortyn: (left) Isis holding the sistrum, a sacred instrument (see a bronze sistrum in Rome); (centre) Hades/Serapis accompanied by Cerberus, the three-headed dog who controlled the access to the underworld; (right) a nymph holding the basin of a fountain

Because of its role as capital of a province which included territories on the southern shore of the Mediterranean Sea, Gortyn had a cosmopolitan population and temples were dedicated to Egyptian deities such as Isis. Archaeologists found a statue representing Hades, the Greek god of the Underworld, or Serapis, an Egyptian god who combined attributes of Osiris and of Hades. The Greeks feared to even name the latter and used metaphors instead; the Egyptians had a much more relaxed approach to death as they believed in some form of resurrection. The statue shows Hades/Serapis with Cerberus and the long pole by which the god pushed the souls of the dead into the Underworld. 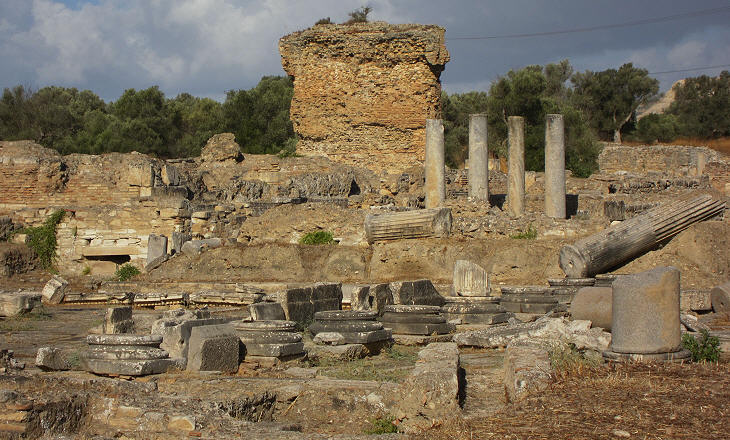 Another view of the ruins of the "new" Roman town

The remaining buildings, which lie dispersed over the fields, are entirely of brick and rubble. Tozer
The importance of Gortyn declined after 297 AD when Emperor Diocletian reorganized the administrative division of the Roman Empire into twelve dioceses comprising more than a hundred provinces. Cyrenaica and Crete were assigned to different dioceses and Gortyn lost the role it had for more than 300 years.
In the VIIth century the wealth of Gortyn was impacted by the Arab invasion of the countries on the eastern and southern coasts of the Mediterranean Sea; well established trade routes were interrupted and Crete was subject to Arab raids. Eventually in the 820s the island was conquered by Muslims from Spain and an emirate was established; Gortyn was razed to the ground and Chandax (Venetian Candia, today's Iraklion), a new capital of the island was built near ancient Knossos. 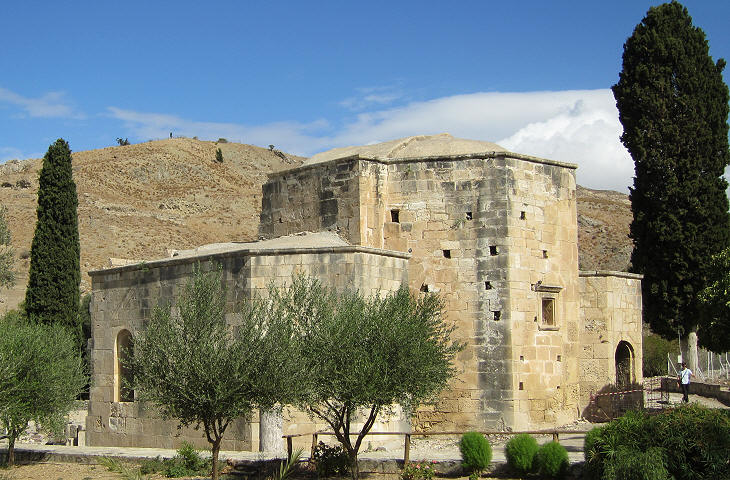 To the north of the village Metropoli, on the east side of the rivulet, and at the foot of the hill, is the antient metropolitan church of Titus, who, it is said, was the first archbishop of Crete, settled here by saint Paul, who in his epistle to him, tells him, "That he left him in Crete; that he should set in order the things that were wanting, and ordain elders in every city". Pococke
From Crete the Arabs launched raids on many ports and islands of the Aegean Sea; in 960 a Byzantine army led by Nikephoros Phocas landed near Chandax and after a long siege seized it and eventually conquered the whole island. The Byzantines did not attempt to rebuild Gortyn, but they did rebuild a large VIth century church dedicated to St. Titus, a disciple of St. Paul who organized the first church in Crete and was the first bishop of Gortyn. 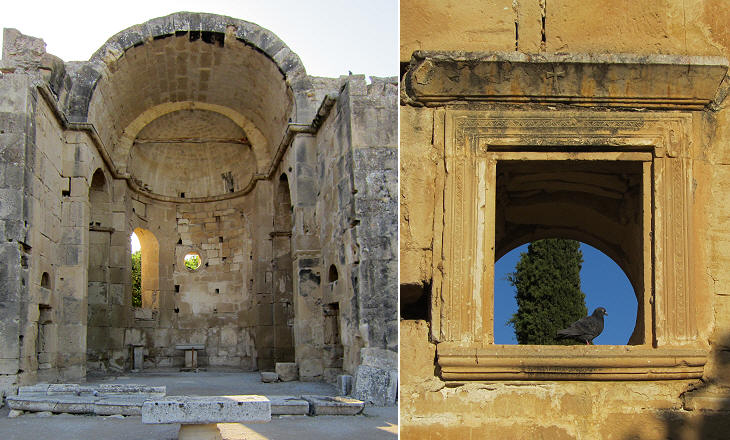 Agios Titus: (left) interior; (right) detail of the apse (see the church dedicated to the saint at Iraklion)

It is with great reason supposed that Titus resided here, and that this church was afterwards dedicated to him; it is above a hundred feet long, and fifty broad; the east part is almost entire, and shows that it has been a noble fabric; the walls are three feet and a half thick. Pococke
As Gortyna was the Roman capital of the island, and contained an old-established colony of Jews there is every reason to believe that it must have been the headquarters of Titus's ministrations. Tozer
The image in the background of this page shows a very old clay statue of Athena found at Gortyn and now at the Archaeological Museum of Iraklion.

Move to Knossos or Phaistos.