- How to Spend a Peaceful Day in Rome
Visiting Rome

Carriage rides have always been popular with tourists who do not have much time to spend seeing a city and who are happy with the generic information provided by the coachman.
It was an inexpensive and comfortable way to visit Rome which has monuments spread over a large area (it was because it is no longer cheap). 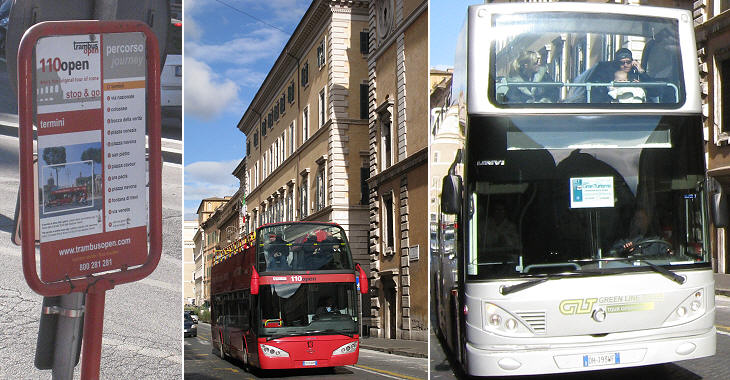 A modern alternative to a carriage ride is to buy a daily ticket on a hop-on-hop-off double-decker; the upper deck is open and it allows a view from a raised position similar to that of a carriage.
There are several companies providing this service some of which specialize in religious buildings (Roma Cristiana) or archaeological sites (Archeobus).
Those who are interested in just a daily pass for all public transportation (bus, metro and rail) may prefer to buy a ticket called "B.I.G." (Biglietto Integrato Giornaliero). 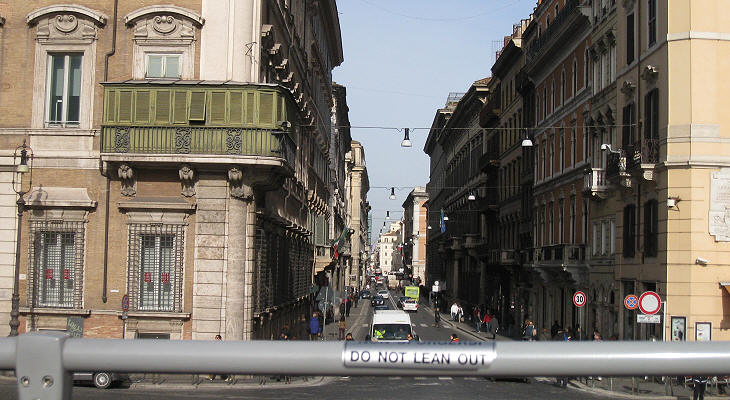 Passengers are provided with headphones giving information on the monuments along the route and with some safety rules to be followed during the journey. It is wise to comply with them because the bus may come to a sudden halt and passengers standing on the upper deck may lose their balance. Special attention should be paid to children and babies.

Staying on the upper deck in winter may lead you to catch a cold, but also to take some unique photos which combine monuments of various periods of Rome. 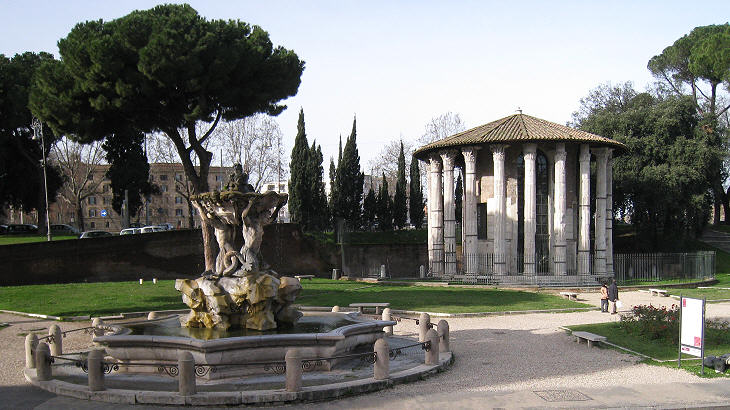 Bocca della Verità (Mouth of Truth) became widely known when it appeared in a scene in Roman Holiday, a 1953 movie starring Gregory Peck and Audrey Hepburn. However it did not become a Roman "must see" until 2000, when another movie (Sleeping Bride by Hideo Nakata) made it popular among the Japanese; now there is always a long queue of people waiting to take a picture of themselves with a hand in Bocca della Verità.
Those who fear they will not pass the test of this ancient lie detector, can stay on the bus and have a look at fine monuments of Ancient and Baroque Rome. 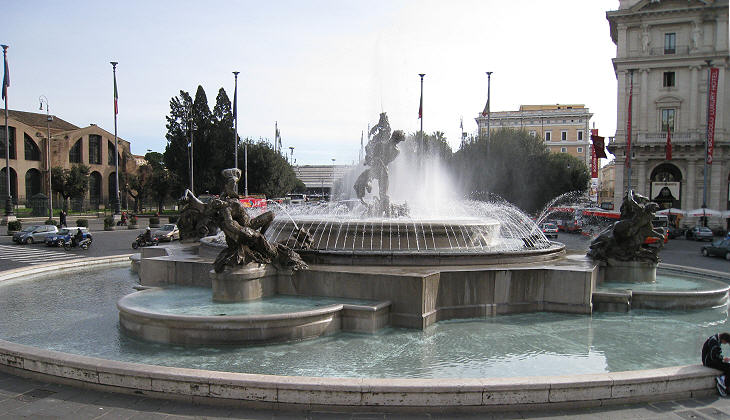 Grand Tour travellers entered Rome at Porta del Popolo; those of today arrive at the airports of Fiumicino or Ciampino, but for a century (1860s-1960s) Stazione Termini was the gateway of Rome. Fontana delle Naiadi was the first Roman monument railway travellers saw; especially if they came from a provincial town they were much impressed by its design and spouts. That happened to the writer of this page when, as a boy of six, he first visited Rome. Even today he marvels at it.

From the upper deck it is possible to observe Tempio di Venere e Roma in its entirety, usually one sees S. Francesca Romana from the Roman Forum and the eastern section of the temple from Piazza del Colosseo, thus losing the link between the two buildings. The temple was designed by Emperor Hadrian himself; his project was criticized by Apollodorus of Damascus, the preferred architect of Emperor Trajan, who paid for his remarks with his life (according to Cassius Dio).
By placing the apses of two temples back to back, perhaps Hadrian was thinking of Janus, one of the few Roman deities without a Greek equivalent. Janus was the god of doors and gates and of the transition between the old and the new year (hence January). He was portrayed with two heads looking in opposite directions and the twin temples did the same. When the western temple was turned into a church the whole complex became a symbol of the transition from Ancient to Christian Rome.

Coats of arms (left to right): Pope Alexander VI at Passetto; Muti Bussi family on their palace; Pacelli family (that of Pope Pius XII) on their palace next to Palazzo Vidoni

The itinerary followed by the hop-on-hop-off buses is not the straightest one between two points, but it tries to show as much as possible of the city; the tour takes two hours, but there are no limits to the number of times one can do it. It is an opportunity to have a look at the many coats of arms the popes and the noble families placed on their palaces or on the monuments they built. 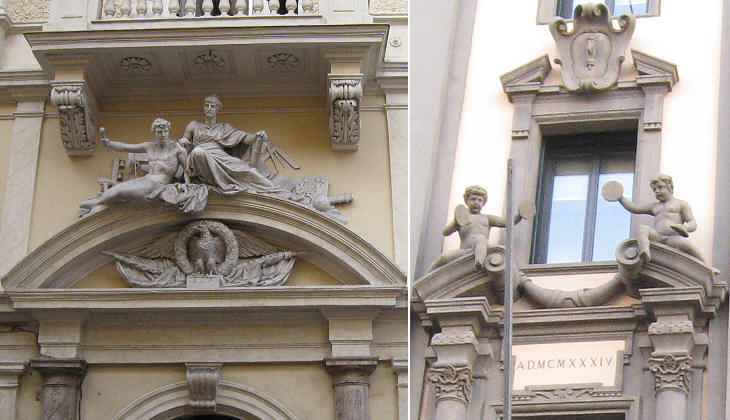 The buildings which were erected in the 50-60 years after 1870, usually are not paid a lot of attention; in general they are located in very busy streets with many shops; passers-by are more interested in examining the goods on sale rather than looking at the palaces of Roma Capitale. The upper deck allows the discovery of many statues and elaborate decorations. 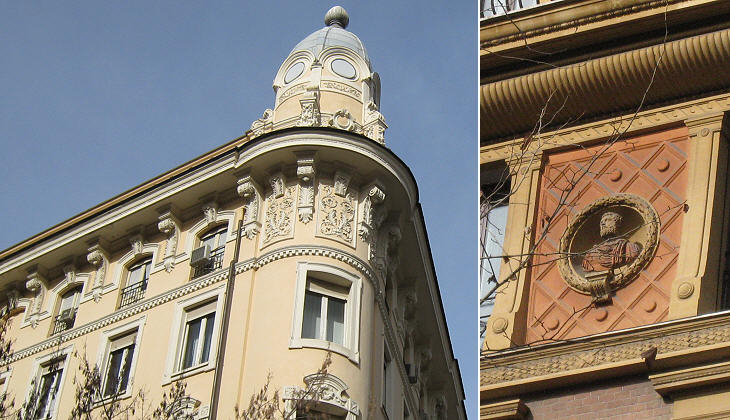 Details of buildings in Prati (left) and Via Vittorio Veneto (right)

Other Days of Peace pages:
A Sunny Day in Villa Borghese
At the Flea Market
At the Beach
Voicing Your Views ..... and feeling better
Christmas in Rome
Eating Outdoors
Celebrating the Foundation of Rome
A visit to Roseto di Roma
The procession of La Madonna de Noantri
Running the Marathon
Visiting Multi-ethnic Rome
Finding Solace at the Protestant Cemetery
Attending 2007 July Events
Rome's Sleepless Night
Attending Winter Ceremonies
Jogging at Valle delle Camene
Sailing on the River to see the Bridges of Roma
An October Outing to Marino
A Special Spring Weekend
Watching the Parade
Attending a Funeral ...and enjoying it!
Embassy-hunting in Parioli
Visiting Rome at Dawn
Visiting Rome in the Moonlight
Celebrating Eritrean Michaelmas in Rome
Baroque Fireworks
Playing in the Snow at the Janiculum
Watching the Pride Parade
Reading Ovid at St. Peter's
Reading Memoirs of Hadrian at Villa Adriana
Visiting the Movie Sets at Cinecittà
Looking up at the Ceilings of the Vatican Palaces
Spending the Last Roman Day at St. John Lateran's Cloister
Reading Seneca at Caracalla's Baths
Walking the Dog at Valle della Caffarella