- St. Saviour in Chora
(inscription on a gate opposite Topkapi Sarayi) 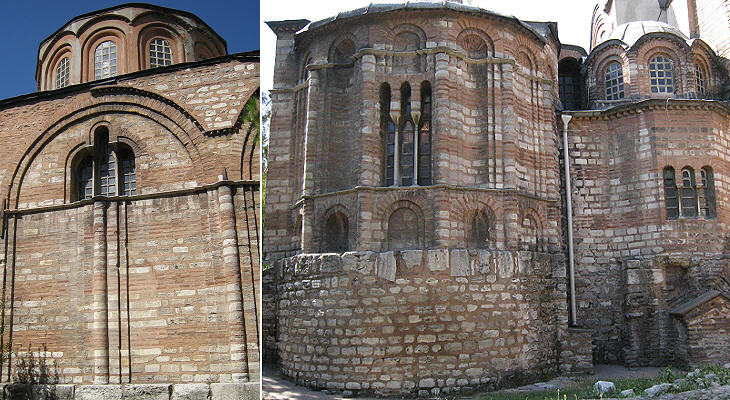 Exterior: (left) side view and (right) apse of Parecclesion

The Kahriyeh Djami, the Church of the Chora, S. Saviour's in the Fields as we should say, so called because it stood outside Constantine's wall, is said to have been founded by Justinian and rebuilt by Maria Ducaina, mother-in-law of Alexius Comnenus in the 11th or early in the 12th century. It is a very complicated structure; the main body of the church is small, cruciform in plan with an apse, and a dome which has been very lately rebuilt after damage by an earthquake. The walls are lined with marble slabs in bands and panels.
Thomas Graham Jackson - Byzantine and Romanesque Architecture - 1913.
The church was located in an area which was outside the walls built by Emperor Constantine; this explains the reference to Chora (land/fields) in its name. It was included in the walls built by Emperor Theodosius II and it was a very short distance from the late imperial residence of Blachernae. 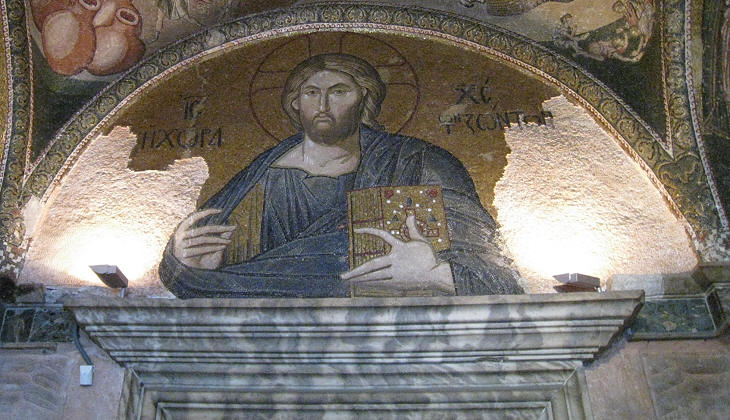 The question of western influence is raised when we turn to the decorations of the narthex. The usual double narthex here assumes unusual proportions, and quite predominates over the church to which it forms the vestibule. The outer narthex is six bays long, each bay being covered with a domical vault, and the entrance door has a red marble frame of a usual Byzantine section. A door with a similar frame of red marble leads to the inner narthex where two of the bays have real domes on pendentives. Jackson
It was customary in Byzantine churches to place an image of Christ Pantocrator at the entrance of the main nave. The iconography to be followed was well established; the left hand held a book (the Gospel) while the right one was raised in blessing; the view was frontal with the hair centrally parted; the face had a grave expression. The unknown author of the mosaics of St. Saviour followed the tradition and yet the look of Christ is very humane. You may wish to see similar mosaics at Cefalù and Monreale. 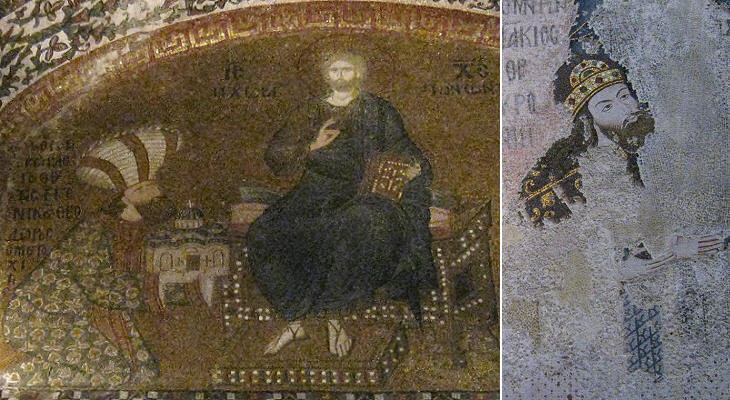 There is no name or monogram of the artist, - for there seem to have been more than one, as the work is unequal, - but the donor is depicted kneeling with an enormous balloon-like bonnet on his head, and offering a church, intended no doubt for this one, to the Saviour. This mosaic is over the inner door leading to the church and bears an inscription: Theodorus Metochites the Logothete or Treasurer repaired and decorated the narthex under the Palaeologi after the explusion of the Latins and restoration of the Greek Empire. It is recorded that the work did not extend to the interior of the church. Over the door between the outer and inner narthex is the date 6811, which deducting 5508, the assumed age of the world at the birth of Christ, gives us 1303 as the date of this mosaic. Jackson 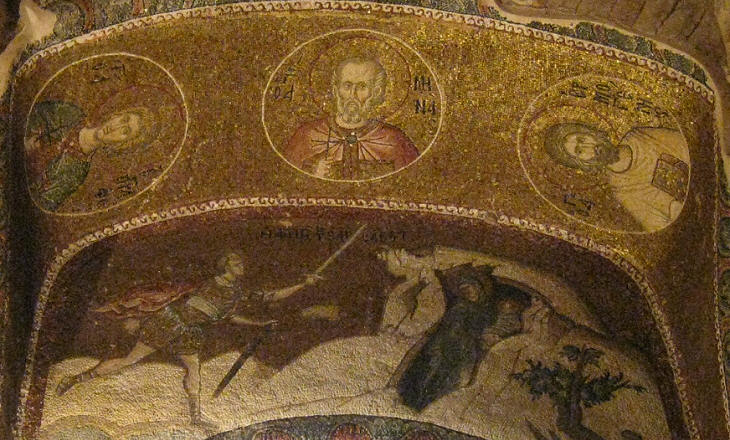 Outer Narthex: St. Elizabeth and St. John hiding in a cave and images of saints

The most remarkable thing in this church is the mosaic decoration of the two nartheces, which very fortunately is dated, and so fills an important place in the history of pictorial art. Jackson
The church of St. Saviour in Chora was embellished with mosaics and frescoes in the early XIVth century. It is the finest monument of Palaeologian Constantinople, the last period of the Byzantine Empire (1261-1453) which was named after the Palaeologus dynasty. 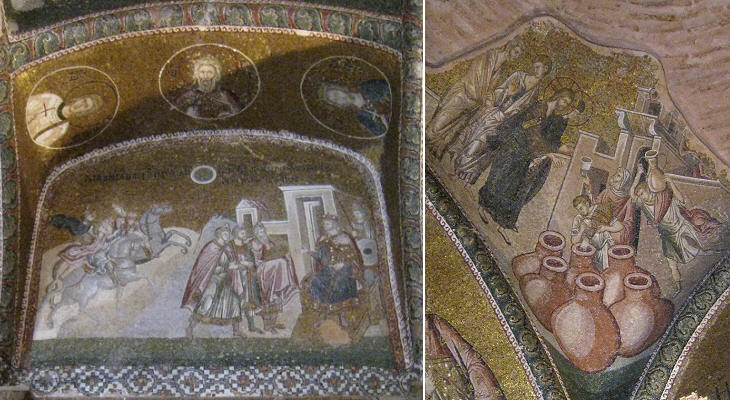 Outer Narthex: (left) Journey of the Magi; (right) the Wedding at Cana

It is extremely like the work of the Italian primitive painters, Cimabue, Giotto, and Memmi. The faces are modelled a good deal, and there are attempts at foreshortening and expression very unlike the character of the older mosaics of the 5th or 8th centuries. Jackson
The mosaics of St. Saviour have been compared with the works by Giotto; perhaps the mosaics by Pietro Cavallini in S. Maria in Trastevere are a more appropriate comparison. Giotto very rarely made mosaics, unlike Cavallini. The iconographic plan of the decoration is very complex: mosaics and frescoes depict scenes which can be grouped into three topics: a) the ancestors of Jesus Christ; b) events of his life; c) events of the Virgin Mary's life. The unusual thing is that scenes belonging to the same theme are not located next to each other, but are distributed in the inner and outer narthexes in an apparently haphazard way. They are accompanied by images of saints, dedicatory panels and deesis, iconic representations of Christ. 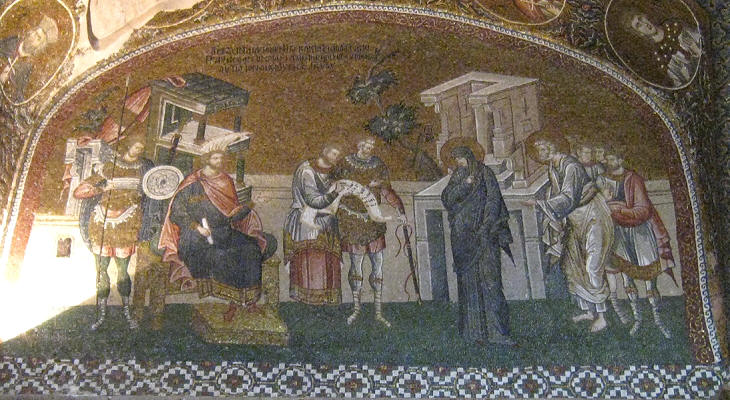 Outer Narthex - The enrolment for taxation

Very often scenes depicting events of the life of Jesus or of early saints were set in the historic period they were painted; in these cases Jesus/the Virgin Mary/the saints wore long robes which were thought to be typical of the ancient Roman Empire, while the other characters were portrayed in the costumes of the (then) present time; so the advisors and soldiers surrounding King Herod in the image above give us an idea of the Byzantine court at the time of Emperor Andronicus II (1282-1328). 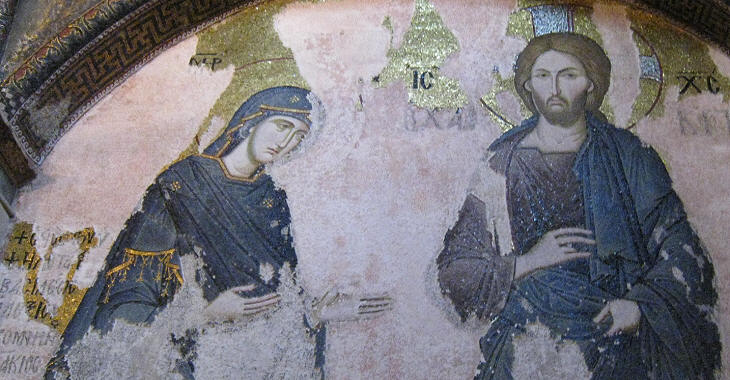 A second deesis is located in the narthex: it is thought to have been inspired by a standing figure of Christ on the Chalke (Brazen) Gate of the (lost) Imperial Palace. It depicted a full length figure of Christ standing on a footstool, with the Virgin at his side in the act of asking for mercy for mankind. Her hands are turned upwards in a very ancient gesture of prayer. This mosaic is thought to belong to the XIIth century. 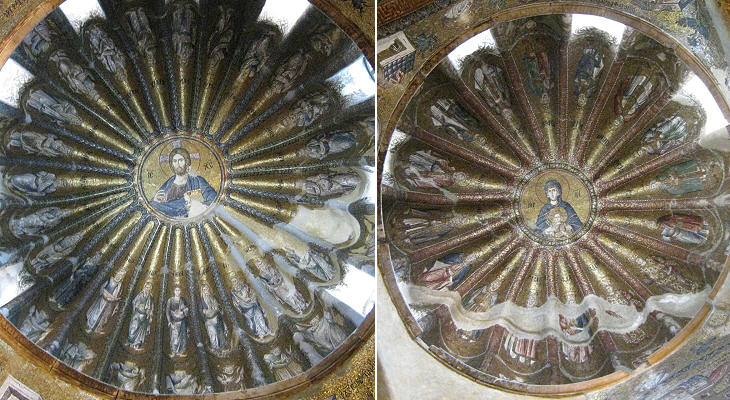 Is the character of these mosaics due to influences from Italy, or is the development of art in Italy derived from Byzantium? (..) There was no doubt a concurrent movement among the Greek painters in the direction of a more natural and historical manner; but whether it was due to closer intimacy with the western schools which might be one result of the fourth Crusade, or whether on the other hand the two schools of the east and west moved independently of one another in the same direction is a question that will probably always be debated. The solution may perhaps be found in that curious magnetic communication of new ideas which explains the simultaneous, or almost simultaneous, appearance of changes in style in different districts and different countries, both in architecture, painting, and sculpture. But it must be observed as bearing on this question, that while Italian art rapidly progressed from Giotto to Raffaelle, Byzantine painting left to itself sank gradually into mere repetition and stagnation. Jackson
Two small domes were placed at the ends of the narthex; their decoration is very elaborate also in the choice of colours; one dome has bluish tones while in the other red is prevalent. They portray the ancestors of Jesus Christ from Adam to Jacob (left) and the kings of Israel (right); two central medallions complete the decoration. 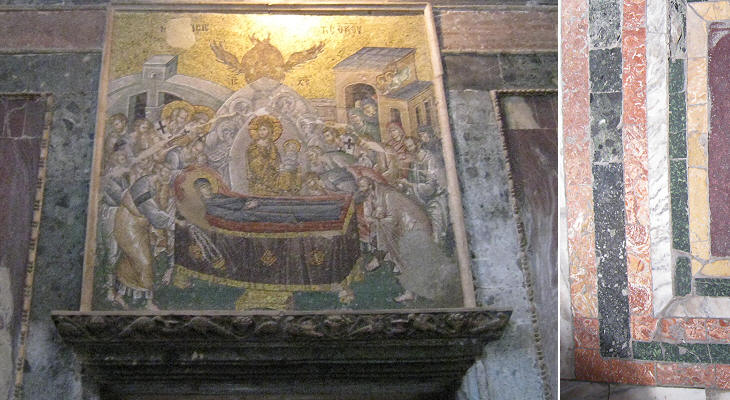 Nave: (left) Dormition of the Virgin; (right) detail of a marble panel

The Koimesis (falling asleep in death) of the Virgin is first found in Byzantine art in the Xth century. This image soon became a very popular icon. The Virgin was shown lying on a bier, or pallet, for the dead. Christ stood behind her holding up her soul, as if it were a baby, offering it to attendant angels to take to heaven. The apostles stand witness, led by St. Paul at her feet and St. Peter behind her head. You may wish to see the same subject in a mosaic at Palermo.
The walls of the nave are decorated with marble panels made from materials taken from ancient buildings. 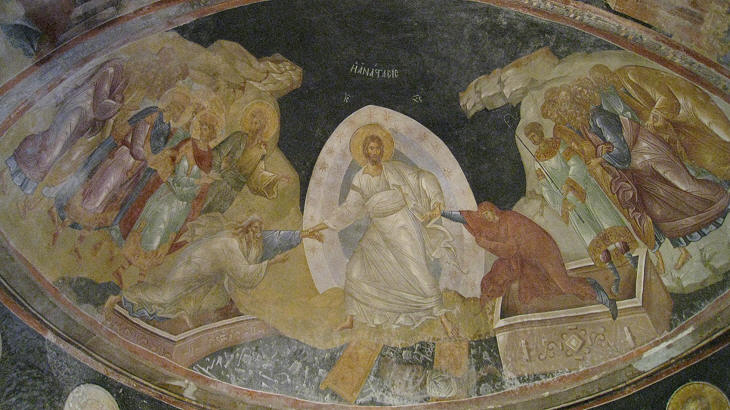 Theodore Metochites built a funerary chapel (Parecclesion) on the southern side of St. Saviour. Its decoration is based on frescoes which greatly depart from tradition, probably because the chapel was a less official location than the main church.
A large fresco in the apse portrays a dramatic Resurrection; Jesus Christ is surrounded by a mandorla, an almond like shaped aureola: mandorla means almond nut in Italian. This special symbol was used to depict sacred moments such as the Resurrection. This particular iconography is known as the Harrowing of Hell, the gates of which lie beneath the feet of Jesus. The two figures rising up from their graves are Adam and Eve. The subject was a common one, but the fresco technique allowed for much greater movement and more vivid colours than the mosaics did. 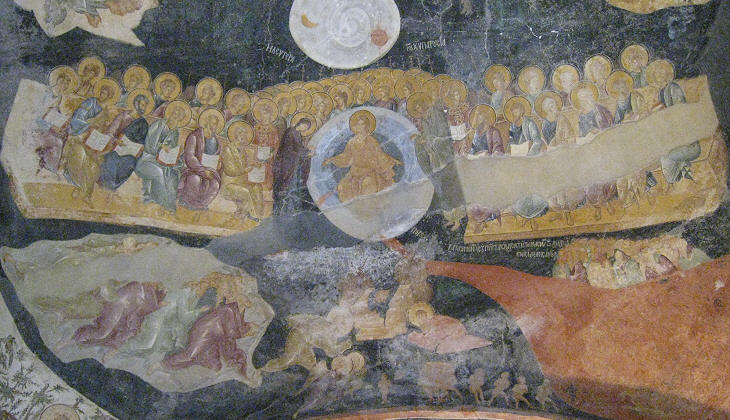 A second large and complex fresco depicts the Last Judgement: its design is more traditional. In Western Europe inscriptions were very rarely used to explain the meaning of a painting, whereas Byzantine mosaics and frescoes often included explanations and quotations. In this painting Jesus says to the condemned souls: Depart from me, ye cursed, into everlasting fire, prepared for the devil and his angels (Matt. 25:41). The large red area is a River of Fire broadening to a lake in which are the damned. 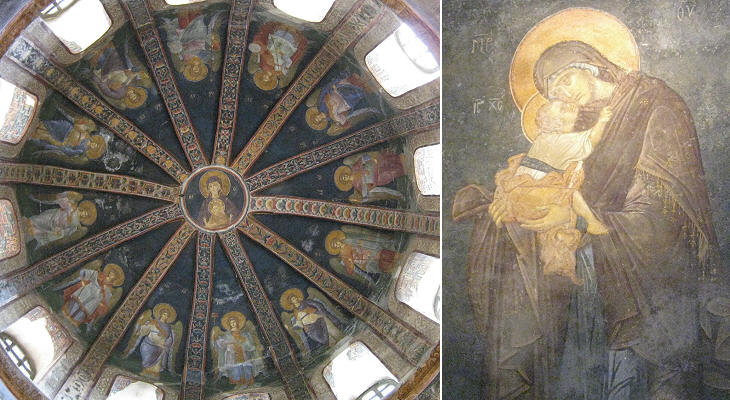 Parecclesion: (left) Dome, also in the image used as background for this page; (apse) Virgin Eleousa

Part of the decoration of the Parecclesion is dedicated to the Mother of God; in particular there is a very nice painting portraying her as Eleousa, the Merciful or more specifically as Glykophilousa, the Sweet Kissing, a sub-type of the Eleousa iconography. 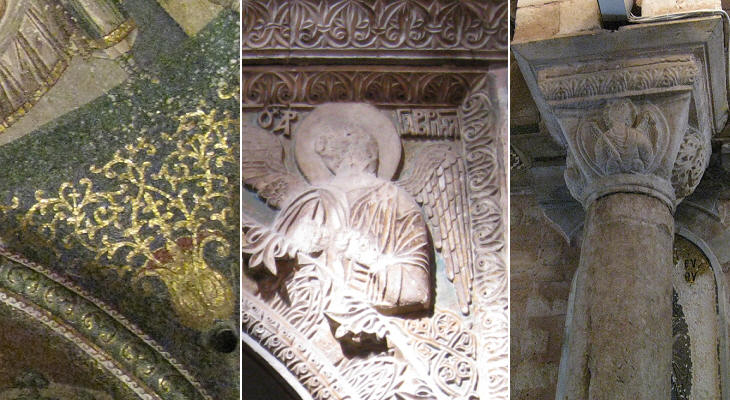 (left) Vase of happiness; (centre) relief portraying an angel; (right) capital with the image of an angel

The complex was turned into a mosque by Atik Ali Pacha in the early XVIth century; mosaics and frescoes were usually covered with plaster and the faces of the angels in capitals and reliefs were erased. In 1948 the mosque was closed for a lengthy restoration. In 1958 St. Saviour in Chora became a museum.