Johann Ludwig Burckhardt (1784-1819) was a Swiss explorer who was tasked with finding the source of the River Niger by the African Association which was founded in London in 1788 to promote the discovery of the interior parts of that continent. He believed he could reach his purpose by becoming fluent in Arabic and having an in-depth knowledge of the Muslim way of living. In 1809 he moved to Aleppo in Syria where he studied the Qur'an, probably converted to Islam and took the name of Ibrahim. In September 1810 he travelled through Northern Lebanon and visited Baalbek. In April-May 1812 he visited Haouran, a region in Southern Syria and Jebel Ajlun, a range of mountains east of the River Jordan valley. In the summer of that same year he decided to reach Cairo by following an itinerary to the east of the Dead Sea, rather than through the usual route across the Holy Land. At Cairo Burckhardt hoped to join a caravan going south-west across the Fezzan region towards the assumed location of the River Niger source. 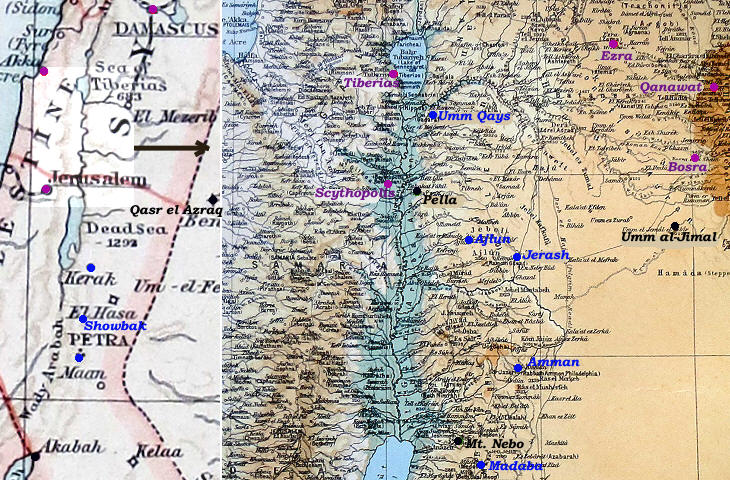 On his way to the River Jordan Burkhardt identified the site of Scythopolis, an ancient city which had close links with the region to the east of the river. He ventured across a territory which was nominally part of the Ottoman Empire, but actually was a lawless land, exception made for some small towns. Many areas were inhabited by Bedouin tribes who were hostile one to another and Burckhardt was often at a standstill because no one was willing to guide him to a place controlled by another tribe. Notwithstanding all these difficulties he managed to visit several ancient sites and eventually Petra, the capital of a kingdom which was annexed to the Roman Empire by Emperor Trajan in 106 AD (Province of Arabia Petraea).
Burckhardt sent accounts of his travels to the African Association. They were published in 1822, after his death in Cairo in 1817, which was caused by dysentery. 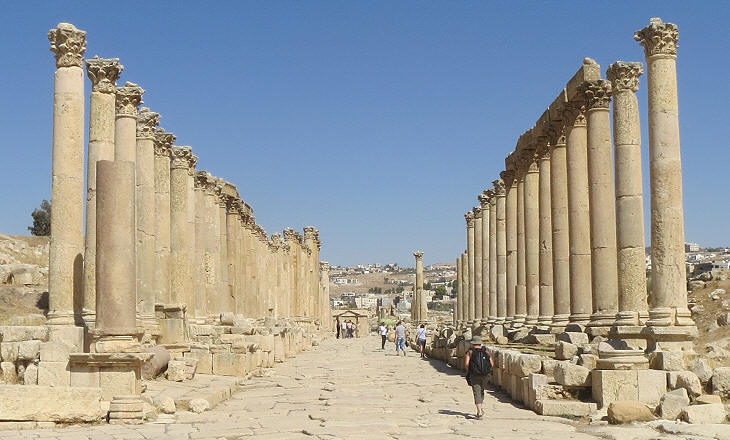 I had, at most, only four hours to make my survey, and it was with great difficulty that I could persuade my three companions to wait so long for me. None of them would accompany me through the ruins, on account of their fear of the Bedouins, who are in the habit of visiting this Wady. They therefore concealed themselves beneath the trees that overshadow the river. (..) I did not examine the ruins closely; meaning to return to them in taking a review of what I had already seen, but my guides were so tired with waiting, that they positively refused to expose their persons longer to danger, and walked off, leaving me the alternative of remaining alone in this desolate spot, or of abandoning the hope of correcting my notes by a second examination of the ruins.
J. L. Burckhardt - Travels in Syria and the Holy Land - 1822
In May 1812 Burckhardt visited Jerash, one of the main Roman towns of the region. Notwithstanding the limited time he had, his description of the ruins is pretty accurate. He had to conceal his interest for ancient monuments as the Bedouins regarded it as an attempt to steal by magic the treasures they were supposed to house. The Romans promoted farming to strengthen their control of the region and Jerash (ancient Gerasa) became a wealthy town with paved colonnaded streets, baths, fountains and two theatres. 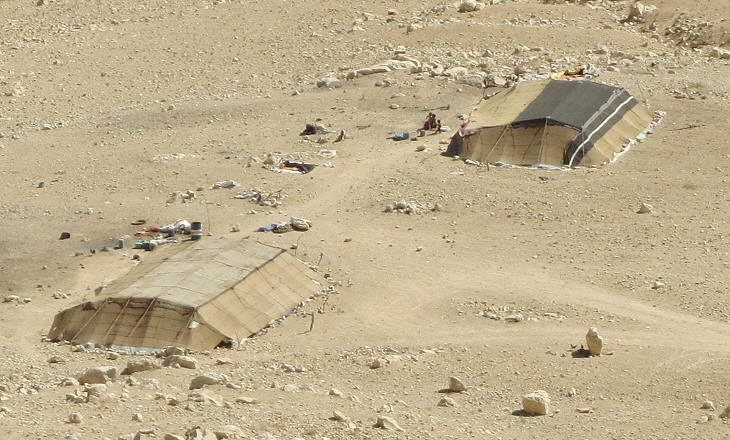 In the valley a large party of Arabs Sherarat was encamped, Bedouins of the Arabian desert, who resort hither in summer for pasturage. They are a tribe of upwards of five thousand tents; but not having been able to possess themselves of a district fertile in pasturage, (..) they wander about in misery, have very few horses, and are not able to feed any flocks of sheep or goats. (..) They are obliged to content themselves with encamping on spots where the Beni Szakher and the Aeneze, with whom they always endeavour to live at peace, do not choose to pasture their cattle. The only wealth of the Sherarat consists in camels. Their tents are very miserable; both men and women go almost naked, the former being only covered round the waist, and the women wearing nothing but a loose shirt hanging in rags about them. These Arabs are much leaner than the Aeneze, and of a browner complexion. They have the reputation of being very sly and enterprising thieves, a title by which they think themselves greatly honoured. Burckhardt
The Swiss explorer very rarely slept under a roof in his journey. He had to adapt to the primitive living conditions of the Bedouins. 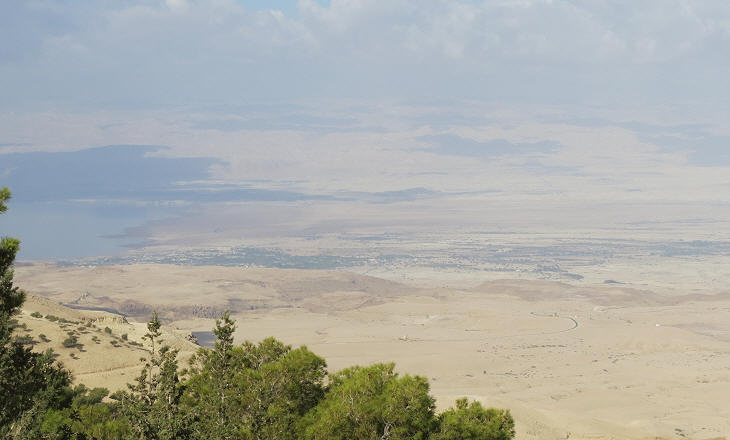 The Dead Sea and the River Jordan Valley where the Baptism of Jesus took place seen from Mount Nebo; see an early Christian mosaic depicting the same view at Madaba

Jordan has some Biblical memories. Burckhardt roughly made the reverse journey of Moses from near Mt. Nebo, where the prophet died in sight of the Promised Land, to Mount Sinai and Egypt. He managed to reach Wady Mousa, the faraway location where he discovered Petra, by claiming he wanted to go there to sacrifice a goat at the tomb of Aaron, Moses' brother. The tomb, on the summit of a mountain, was regarded as a holy site by the local Muslims. In general Burckhardt did not make many references to the Scriptures. 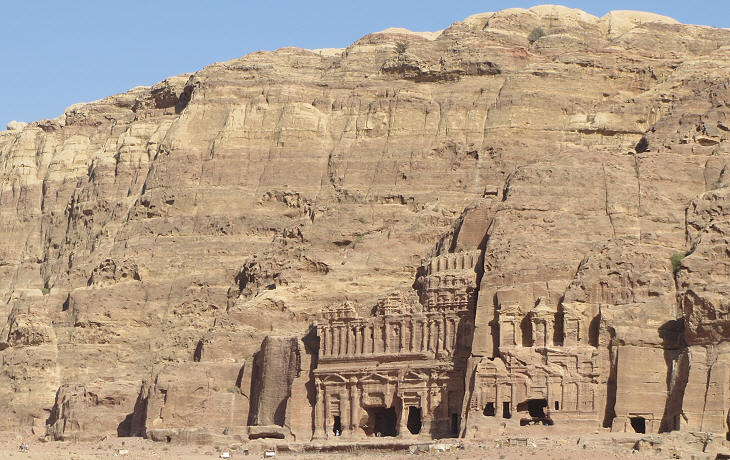 We questioned our new friends as to Burckhardt's visit: they did not remember having seen or heard of any Frank at that period. We the more admired the circumspection of that celebrated traveller, who had thus succeeded so well by his costume and manners in deceiving a people who are always on the watch for strangers. (..) Burckhardt was obliged to make his notes by stealth; often to give up his labours altogether; and to forego, amongst the most interesting places which he visited, the hope of producing even a single accurate drawing.
Léon de Laborde - Journey through Arabia Petraea - 1836
In 1818 Charles Leonard Irby and James Mangle, commanders in the British Royal Navy, visited Petra and described it in more details in a book published in 1823. Léon de Laborde, son of Alexandre de Laborde, visited Petra in 1828 and wrote a book on Arabia Petraea which included some illustrations; in 1836 an English edition was published by John Murray. The public at large "discovered" the ancient city through some engravings published in 1842-1849 based on drawings by David Roberts, a Scottish painter, who visited the region in 1839.
XIXth century historians and art historians were puzzled by the gigantic façades of tombs cut into the rocks surrounding the town. Ancient Roman sources provided limited knowledge about the Nabatean kingdom of which Petra was the capital. Today we know that it almost surrounded the Kingdom of Herod the Great in the late Ist century BC. Ruins of major Nabatean towns can be found in three modern states: Israel (Oboda and Mamfis in the Negev Desert), Jordan (Petra) and Syria (Bosra). 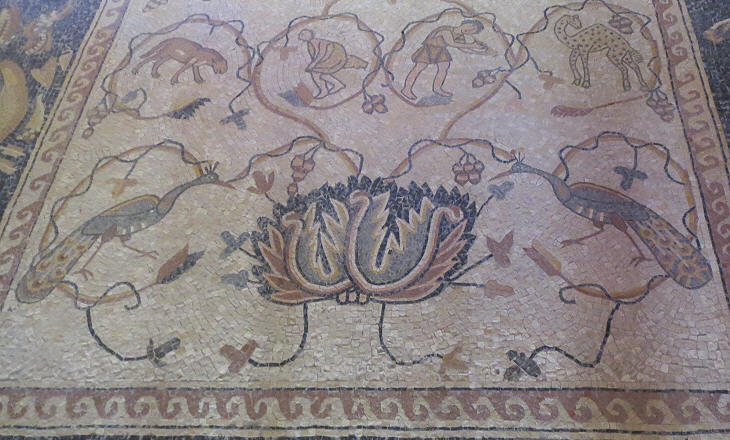 Today the town of Madaba, near Mt. Nebo, attracts visitors owing to a mosaic depicting a map of the Holy Land which includes a detailed representation of the City of Jerusalem. When Burckhardt visited Madaba, this and other mosaics had not been uncovered yet.
The tableland to the east of the River Jordan Valley and the Dead Sea continued to be intensively farmed until the mid of the VIth century. A pestilence, high taxation and the Sassanid (Persian) invasion of the region in 614 caused a general impoverishment. 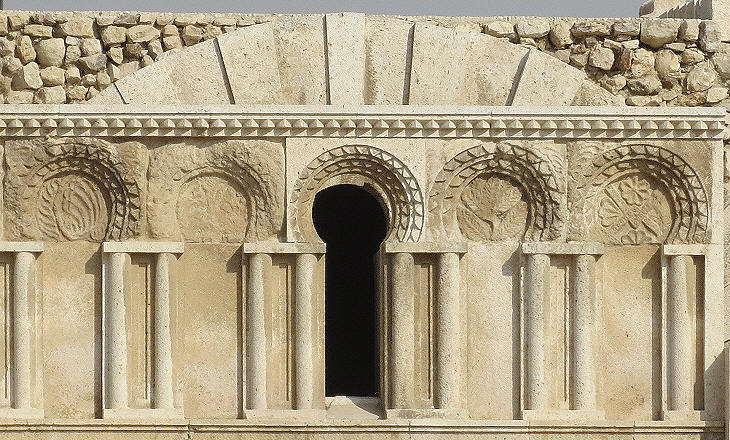 Detail of the Umayyad Palace at Amman

The Byzantine reconquest of the region was short-lived; in 629 at Mutah, south of Kerak, the first Muslim army made its appearance. It was not a major battle, but many Byzantine mercenaries defected and the Muslims understood their enemy was financially exhausted and unable to recruit new troops. In 636 at the River Yarmouk, near the Lake of Tiberias, the Muslims won a decisive battle which gave them control over Syria and the Holy Land.
The Umayyad Caliphate (661-750) had its capital at Damascus and pursued a policy of tolerance towards the non-Muslims. The Caliphs of this dynasty promoted the construction of mosques and palaces, the design of which was still influenced by the canons of classic art. 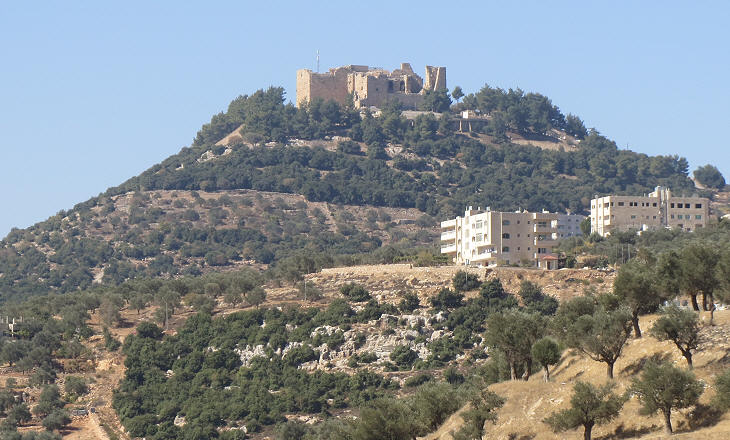 The Umayyads were replaced by the Abbasids, who were based in Baghdad, and today's Jordan fell into a state of abandonment. Farming was discontinued in most parts of the country. A few castles built by the Crusaders or by their opponents (Ayubbids, Mamelukes) are the only monuments of a period of more than a thousand years. The Crusaders called their territories east of the River Jordan Oultrejordain (Transjordan).
The Ottomans conquered the region in the early XVIth century, but they did not care much about this province of their empire. In 1900 the Ottoman government, backed by German advice and support, started the construction of a railway from Damascus to Mecca which crossed the tableland and favoured the development of small towns. The railway reached Medina, 250 miles north of Mecca, in 1908.
At the end of 1918 the Ottoman territories in the Middle East were partitioned between the United Kingdom and France. In 1922 the British Mandate over Transjordan was recognized by the League of Nations. The estimated population of the country was 225,000. In 1946 the independence of Transjordan was approved by the United Nations. The name of the state was changed into Jordan after the (temporary) annexation of Jerusalem and the Palestinian West Bank in 1948.
The image used as background for this page shows a typical decoration of tombs at Petra.