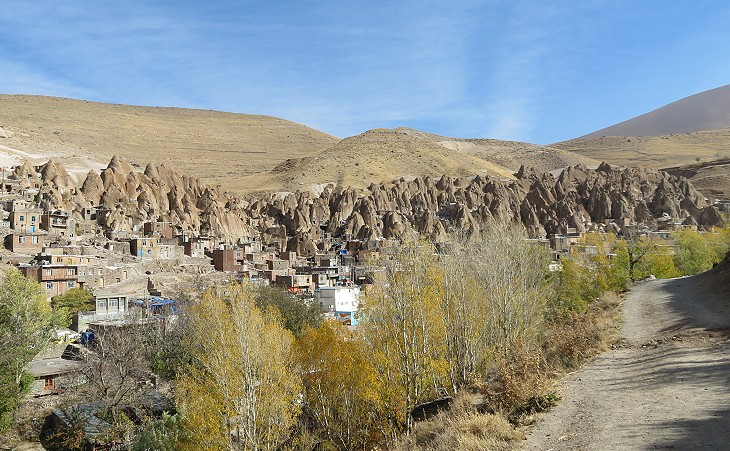 Overall view of Kandovan from the other side of the valley

The next morning the character of the landscape changed. We passed through a rough and mountainous region, at times on a mere beaten path, and through defiles infested with robbers. (..) Geologically the region is intensely interesting. Sulphur-springs deposit their incrustations on the hillsides; layers of limestone and marble form the paving of the highway. The tramping of the horses' hoofs gave back a hollow echo. For half a mile we seemed to be treading over the roofs of caverns. Our imagination pictured subterranean halls, adorned with pendent stalactites, and having winding labyrinths, intricate and endless.
Samuel Graham Wilson - Persian Life and Customs - 1895 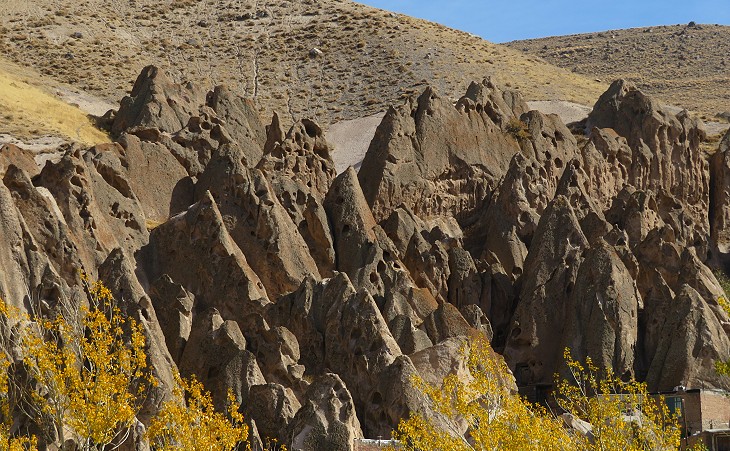 Soon we reached a point where we had an opportunity of entering these caves. There were several stories of them, each about twenty feet high, opening one above the other on the hillside. The first was used for stables and sheepfolds, with mangers cut into the rocks, reminding one of the story of Bethlehem. The next had several large divisions, inhabited by birds. On the vaulted roofs and sides were many curious formations, caused by the oozing of the mineral water through the porous rock. The third was held in dread by the natives, being a den of monstrous snakes. Only the terror awakened by the approach of the Balbas, as they called the Kurds, pointing with a frenzy of fear to their distant mountains, had led them to conceal their household goods and other treasure in the depths of these caves. Wilson
The excerpt describes the journey made by Wilson to go from Tabriz to Maragheh, which in midsummer is accessible by a road over the snowy Sahand, a mountain on the slopes of which Kandovan is situated. It is possible that he actually visited the village or a similar location in its proximity. 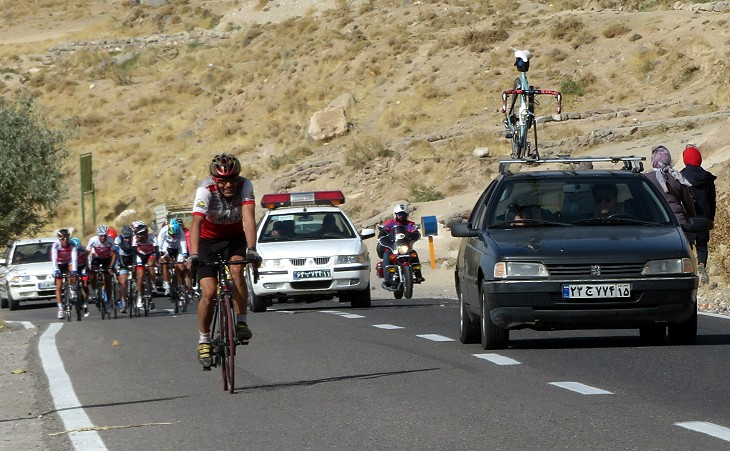 Today an excellent road links Tabriz with Kandovan; it does not go any further which proves it was opened to support the touristic development of the village. It provides an excellent opportunity for cyclists to show they are good climbers. There is a yearly Tour of Iranian Azerbaijan in which several teams compete. The sight of the race came as a real surprise because at the beginning of the excursion to Kandovan our guide told us that we would have visited a faraway location where people still lived in the Stone Age, a sort of Iranian Flintstones. 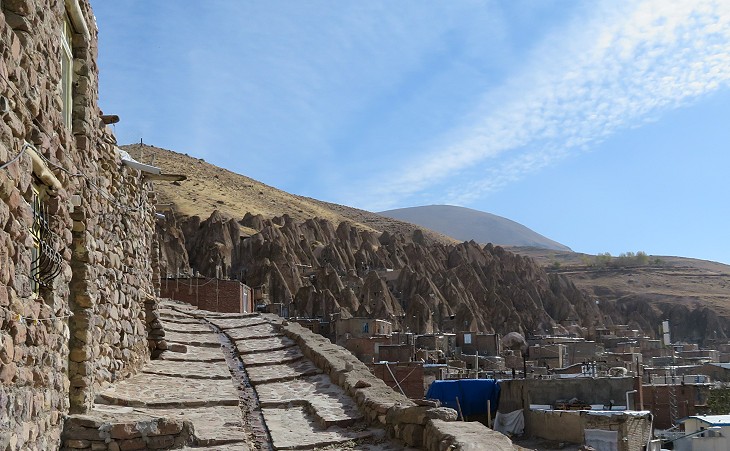 View of Kandovan and of the mountains behind it

The region around Mount Sahand, a dormant volcano 3,707 m/12,162 ft high, is a predominantly rural area with agriculture and a village-based animal husbandry. While permanent settlements can be found up to 2,500 m, (Kandovan is approximately 1,000 m) the higher portions of the mountain are used by villagers in the form of transhumance. The flocks of sheep and goats move up to higher parts of the mountain in the summer; in winter they migrate down to the snow-free mountain forelands. 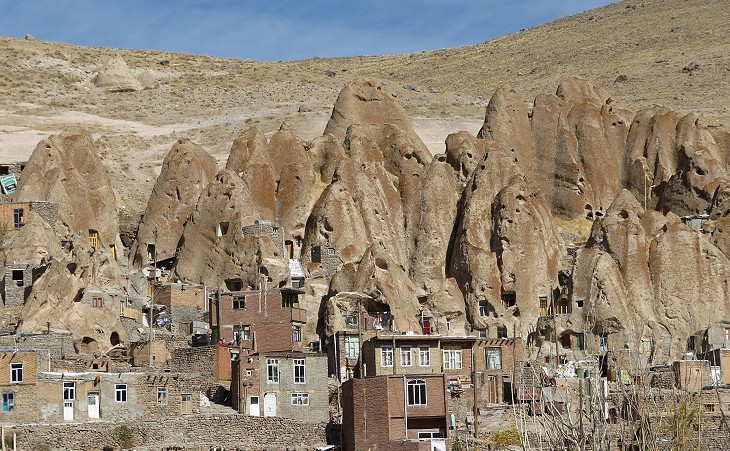 The inhabited section of the stone cones

The stone cones which characterize the landscape of Kandovan are the result of the erosion of rocks which were created by volcanic eruptions, similar to what occurred to a larger scale in Cappadocia, chiefly at Goreme and Uçhisar. For this reason Kandovan is advertised as the Iranian Cappadocia. The early inhabitants of the planet soon discovered that some volcanic rocks were easy to cut and that they did not collapse even when a large hole was dug inside them. This practice was perfected through the centuries and in Cappadocia entire towns were excavated into the rocks, e.g. Eski Gumus. 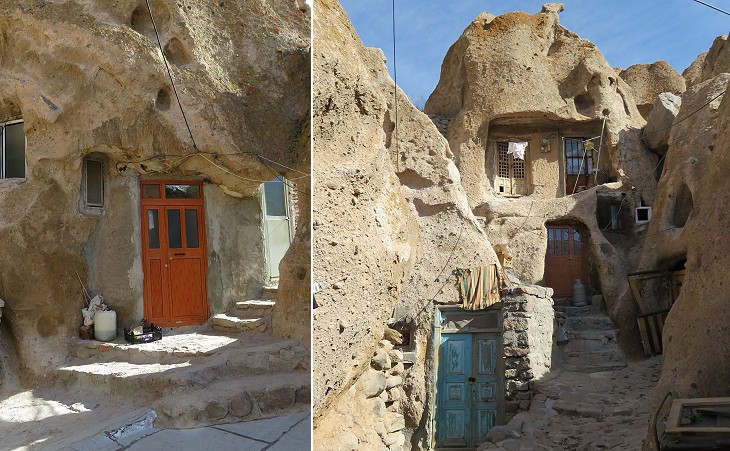 According to the most credited opinion the rocks of Kandovan were excavated to turn them into houses and stables in the XIIIth century when the region was raided by the Mongols who probably set fire to villages at a lower level. The houses are known as karan in the local Turkish dialect, a word that roughly translates as beehives, the same term which is used for mud brick houses at Harran in Eastern Turkey. 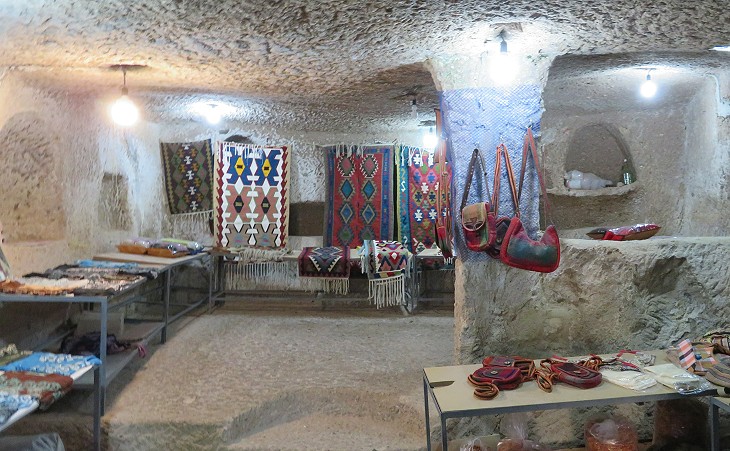 Interior of a "karan", now a shop claiming to sell locally made articles

Over the years the interior of the karan was modified to make more comfortable the life of its inhabitants by creating niches which were used as cupboards and divisions between the more private part of the house and that near the entrance. The thick layer of rock provided a thermal insulation against the rather severe weather conditions of the region. 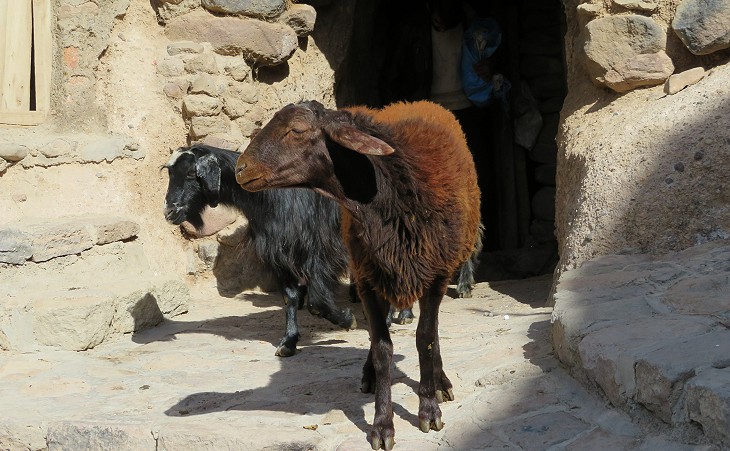 Sheep coming out of a stable

In line with the traditional architecture of rural areas, the people lived in the "upper floor" whereas stables, shelters for agricultural tools, warehouses, etc. were located in the "ground floor". At the time these photos were taken some inhabitants of Kandovan were still employed in traditional activities, while others were trying to improve their standard of living by working in small shops or restaurants. It was not yet entirely a place for tourists (as some spots in Cappadocia), but it is in the process of becoming one, because it is very small and it is a popular destination for a daily excursion for the over 1.7 million inhabitants of Tabriz. 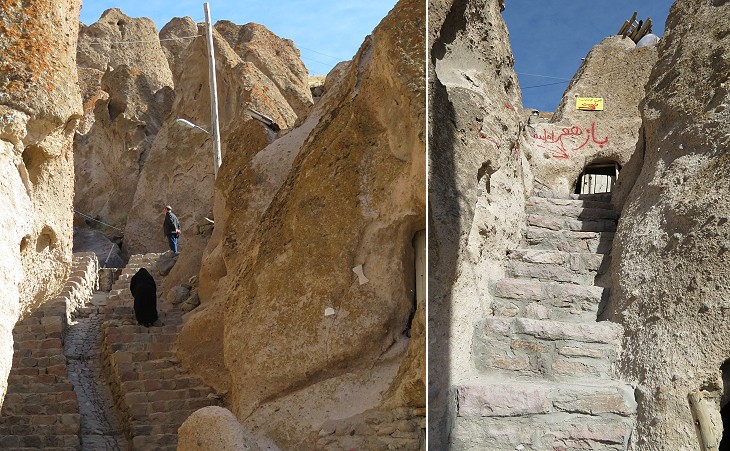 The layout of the rock-cut village has turning steps in order to break high winds, something which is also helped by the conical shape of the karan. Doors and windows face downwind to prevent snow and rain from penetrating indoors. 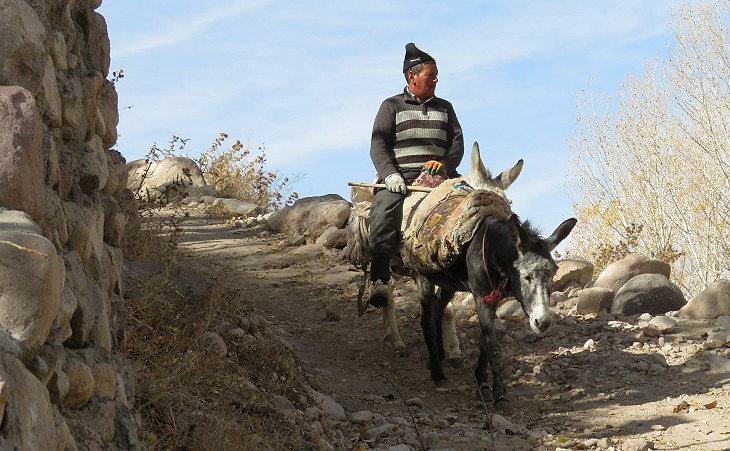 You may wish to see Takht-e Soleyman, a very evocative ancient site in a landscape similar to that of Kandovan and not very far from it, or Abyaneh, another Iranian village in a long and narrow valley in the Karkas Mountains north of Isfahan. 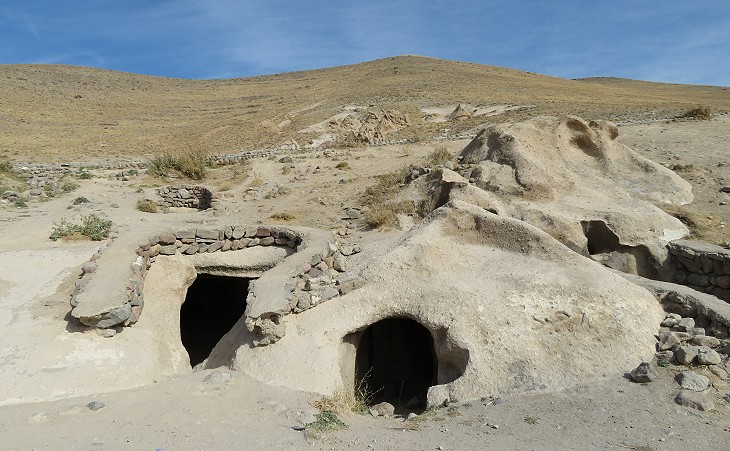 Stables outside the village