in some monuments of the City
(St. Paul's Cathedral)

The Monument to the Great Fire of London (left) The Monument to the Great Fire of London by Christopher Wren and Robert Hooke; (right) relief by Caius Gabriel Cibber portraying King Charles II giving directions for the reconstruction of the city

In the early hours of September 2, 1666 a fire broke out in Pudding Lane near London Bridge: a strong east wind spread the sparks of an apparently minor fire; demolition in the path of fire was the only remedy but the Lord Mayor took this decision when it was too late: in four days 13,200 houses were destroyed and 100,000 people made homeless. So many wild rumours circulated of Papist and foreign responsibility that there was a Parliamentary post-mortem. It found nothing very sinister. The Great Fire, the report concluded, was due to "the hand of God upon us, a great wind, and a season so very dry". Within a week, Christopher Wren, the great English architect, presented King Charles II with a plan; according to Wren's son it provided for "(trans)forming the most publick Places into large Piazzas, the Centers of eight ways" where the use of the Italian word meant Wren had most likely in mind Rome and the Tridente of Piazza del Popolo; his plan was rejected, but in 1669 it was decided to erect a monument to celebrate the reconstruction of London after the Great Fire. The choice fell on a fluted column with an inner staircase leading to a small platform, a mix between Colonna Traiana and Colonna della Pace; the fact that also an obelisk was considered shows that Wren and Hooke were influenced by the monuments of Rome. In the relief which decorates one side of the base King Charles II was portrayed as a Roman Emperor, but with the wig which was in fashion at the time, similar to what was done for King Louis XIV in many monuments and paintings. 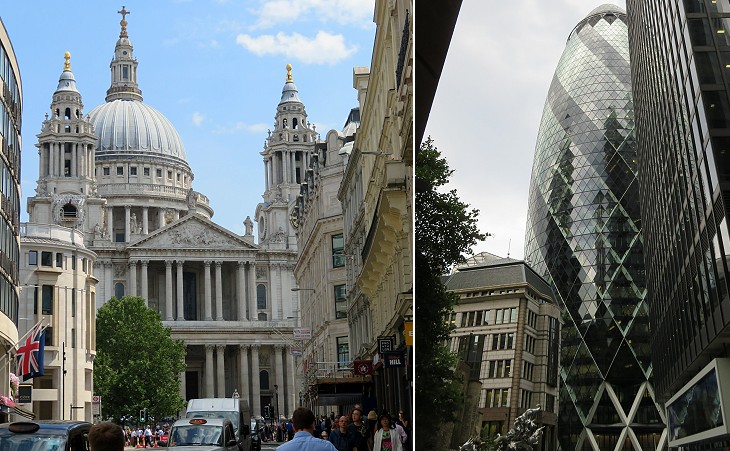 (left) St. Paul's Cathedral; (right) the nearby Gherkin, "the most ingenious and elegant new skyscraper built anywhere in the world for at least 30 years" according to The Wall Street Journal

After burning for two days and nights St. Paul's was a roofless skeleton, but in 1668 the Dean of St. Paul's asked Christopher Wren to help in rebuilding the cathedral. Wren in a short time made a large (1:24) oak model of the building he envisaged (it is still preserved in the Cathedral), but to the churchmen his dome and the overall classical design looked too "Roman", which for them meant too papist. Pressure was put on the King who rejected the model. Wren then prepared another plan where the dome was much smaller and it supported a very tall spire: in this way he managed to gain the King's approval and in 1675 the foundation stone was laid.
Wonderful London a 1926 illustrated book accompanied a picture of the interior with this comment: "Behind us is the long nave, to right and left the two transepts, and before us the choir and the high altar. It is interesting to recall that this long form of nave and choir was demanded by the court party of the time, which had leanings to Popish ritual". As a matter of fact the most striking difference between London's St. Paul's and Rome's S. Pietro is in the two huge bell towers Wren built on the sides of the façade: at that time however the plan for S. Pietro still provided for similar bell towers: a 1641 attempt by Gian Lorenzo Bernini failed because of the subsidence of the ground, but the final decision not to build the bell towers was taken only in the late XVIIIth century.

Wren was an enthusiastic admirer of Bernini's designs, and he visited Paris in 1665 in order to see the Italian architect and his proposed scheme for the rebuilding of the Louvre. The many statues of saints he placed in the decoration of St. Paul's were in sharp contrast with the destruction of statues and images which had occurred during the Commonwealth period (1649-1660). 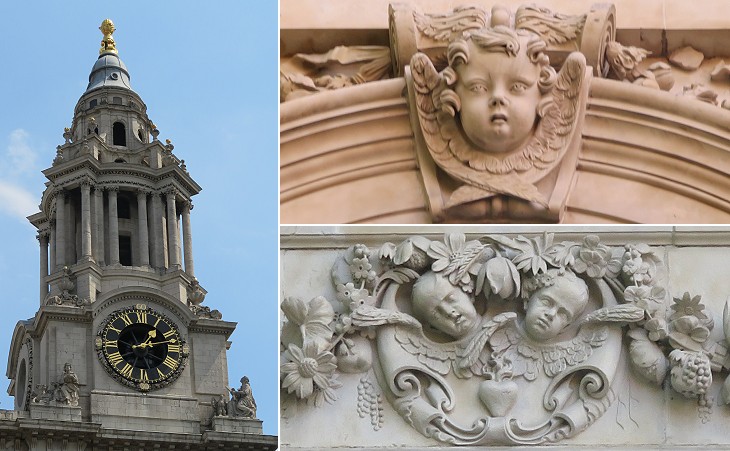 (left) One of the bell towers; (right) decoration based on angel heads

Other aspects of St. Paul's which bring to mind Rome and in particular Francesco Borromini are the use of concave lines and of angel heads as architectural elements.

Wonderful London proudly described the location of St. Mary-le-Strand after the enlargement of the Strand: Before the maze of slums about Holywell Street was swept away, one found this church on the north side of Strand, not in its centre. Neither this church nor St. Clement Danes had their present impressive site in the very middle of a broad and busy thoroughfare. 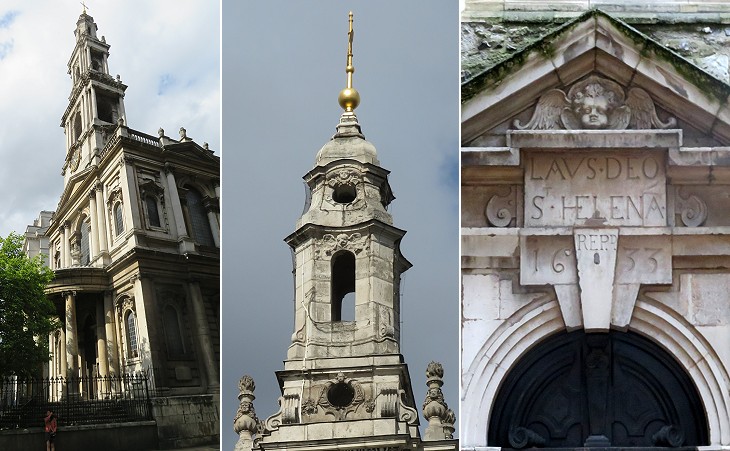 St. Mary-le-Strand was designed by James Gibbs in 1717: he was born to a Roman Catholic family in Aberdeen and he completed his education in Rome where he became one of the assistants of Carlo Fontana who was at the time the leading architect in Rome. The lower part of the façade reminds the viewer of S. Maria della Pace.
By wandering about in the City it is not difficult to find details which show the influence of the Roman manner, as Christopher Wren called what now is known as Roman Baroque.

In 1850 Pope Pius IX restored the Catholic Hierarchy in England by appointing Bishop Nicholas Wiseman Cardinal Archbishop of Westminster. Nicholas Wiseman studied at the Collegio Inglese (S. Tommaso di Canterbury) in Rome. The appointment caused an immediate outcry and Lord Russell, the Prime Minister, described it as "a pretension of supremacy over the realm of England". The reaction was not only due to a Protestant prejudice, but also to the fact that the English public opinion was very much in favour of Italian independence and was disappointed by the Pope's return to Rome after the collapse of Garibaldi's defence of the Eternal City in 1849.
Cardinal Wiseman wrote an Appeal to the English People in which he defined the purely spiritual scope of the Hierarchy and appealed for justice. The storm died down and eventually in 1854 the cardinal's historical novel Fabiola on the early Christian martyrs was met with great success and he became more accepted by the public opinion.
Two great figures of the late XIXth century Roman Catholic Church in England became cardinals and both were former Anglican clergymen. In a way they were rivals and their names can be associated with the two largest Catholic churches in London. 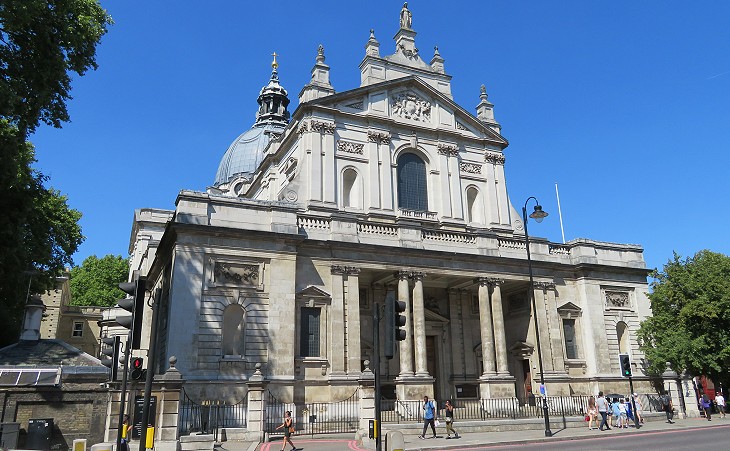 Cardinal Henry Manning (who became the second Catholic Archbishop of Westminster) promoted in 1867 the construction of Westminster Cathedral: the building which was completed only in 1903 was deliberately designed so as not to be perceived as outdoing Westminster Abbey; its architecture is usually defined as Neo-Byzantine.
Cardinal John Henry Newman introduced the institute of the Oratory into England in 1847. It had been founded by St. Philip Neri at Rome in the XVIth century. In 1849 the institution was established in London, and a church was built at the junction between Cromwell Road and Brompton Road; a larger church officially dedicated to the Immaculate Heart of Mary, but known as the Brompton Oratory, was completed in 1897. 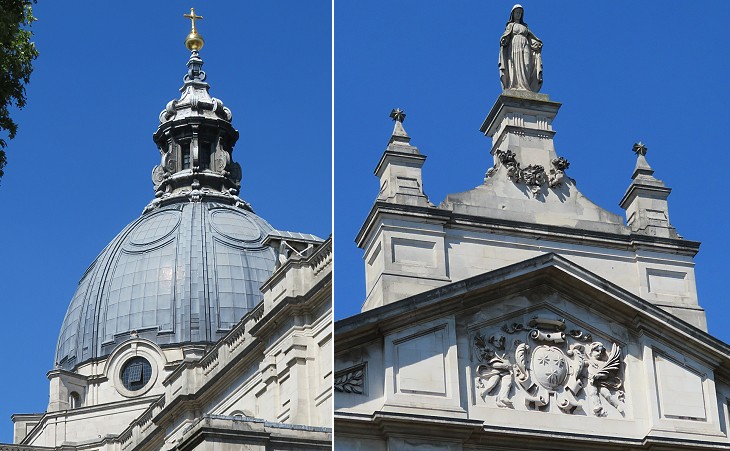 (left) Dome; (right) detail of the façade: the three stars are a heraldic symbol of the Oratory of St. Philip Neri

The second half of the XIXth century saw a growing number of Catholic converts who were anxious to create an atmosphere of Italian devotion; in addition the number of Italians living in London increased significantly.
The church was designed by Herbert Gribble, a young architect and a recent convert, who had in mind many Roman churches from which he picked different details; the overall result however is not a patchwork and the Brompton Oratory is both imposing and graceful. S. Andrea della Valle is often mentioned as having guided Gribble's project, especially for the interior, but the dome reminds the observer of Pietro da Cortona's SS. Luca e Martina. 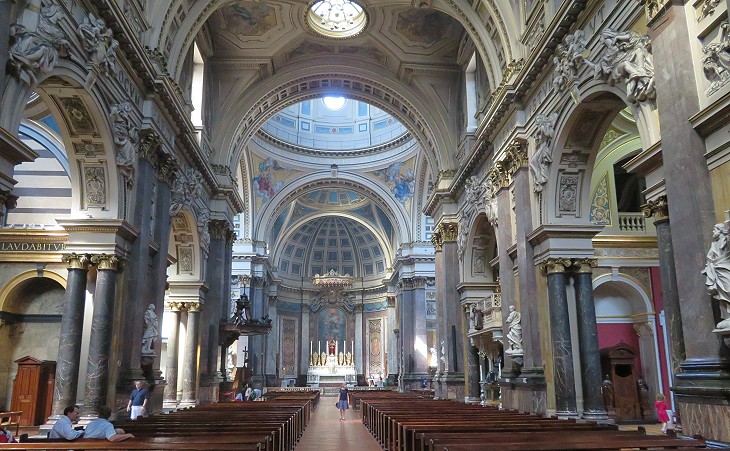 According to Wonderful London "to turn into this great temple from the Brompton Road is to leave London suddenly. The Italian influence of the decorations, the great proportions of the interior, veiled in gloom and tinged with incense, take the mind far away from England".
Statues of the twelve apostles from the Cathedral of Siena were relocated in the Oratory; they are a work by Giuseppe Mazzuoli, an assistant of Ercole Ferrata, who often worked with Bernini. The frequent reference to Memento Mori (Remember that you will Die) was a typical feature of Baroque Rome. In Rome this reminder had often gruesome aspects: in London the reference was much lighter.