- Roman Lyon
(relief at Glanum and quotation from Pliny: "It is more similar to Italy than to a Province") 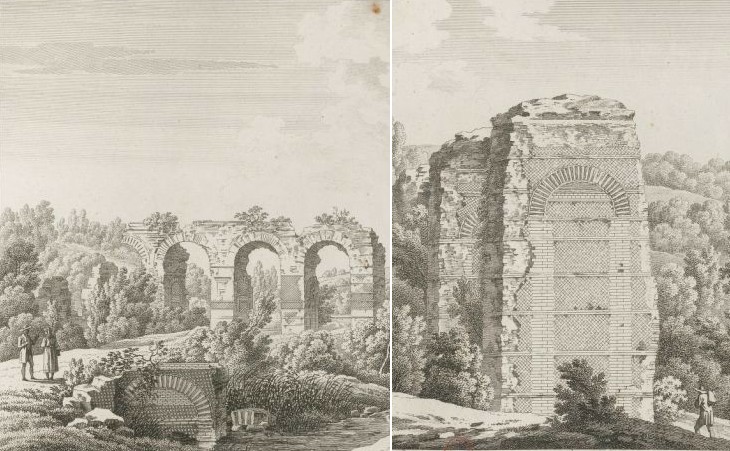 Alexandre de Laborde* (1773-1842), a man of varied interests, made a major effort to record, describe and illustrate the monuments of France. The list of plates of his first book could still be used to develop a travel plan aimed at visiting the main Roman monuments of France. His coverage of those of Lyon was limited to showing some sections of aqueducts, because no other ancient remains were visible at the time, although it was known it had been a very prosperous Roman town.
* Laborde is known also for his accurate description of Spain. 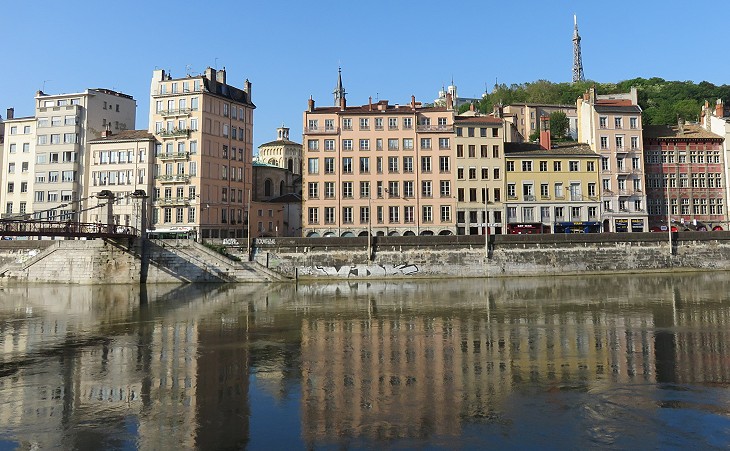 Approximate location of the Roman bridge across the Saône River and view over Vieux Lyon, a historical quarter which is covered in another page and the Fourvière hill

In 43 BC Lucius Munatius Plancus, one of Julius Caesar's military commanders in the Gallic wars, founded Lugdunum (Lyon), a Roman colony at the confluence of the Rhône and Saône rivers, a key location from a military viewpoint. The Roman town stood on Fourvière (perhaps after Forum Vetus, Old Forum), a hill on the right bank of the Saône, while a Gallic settlement known as Condate (Confluence) stood on Croix-Rousse, a hill between the left bank of the Saône and the right bank of the Rhône. The two settlements were linked by a pontoon bridge, similar to that shown on Colonna Antonina in Rome. 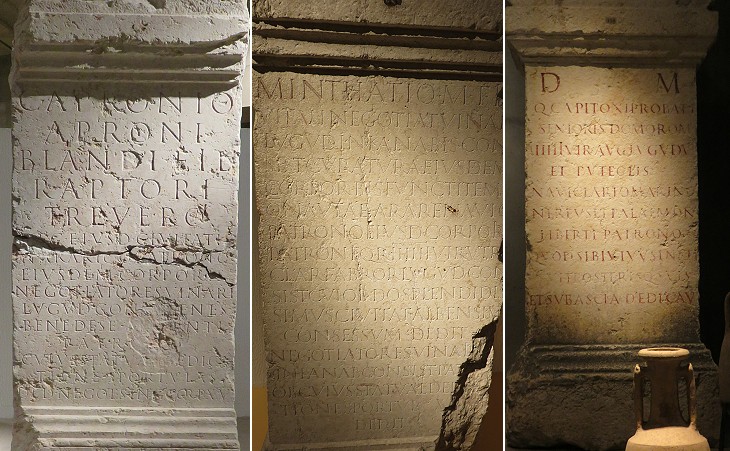 Gallo-Roman Museum of Lyon-Fourvière: (left/centre) inscriptions on pedestals of statues of patrons of the wine merchants, one of whom from Trier; (right) funerary inscription of a shipowner from Puteolis, near Naples; it ends with the words "sub ascia"

When it was founded Lyon was almost a military outpost, but Marcus Vipsanius Agrippa, son-in-law of Emperor Augustus, consolidated the conquests made by Caesar and chose the town as the capital of the new territories; he promoted the construction of roads which linked Lyon with Saintes near the Atlantic Ocean, with Boulogne on the English Channel and with Cologne on the Rhine, via Trier. The town became a major wine trading centre, initially only of Italian wine, but eventually also of that which was made in France and Germany. 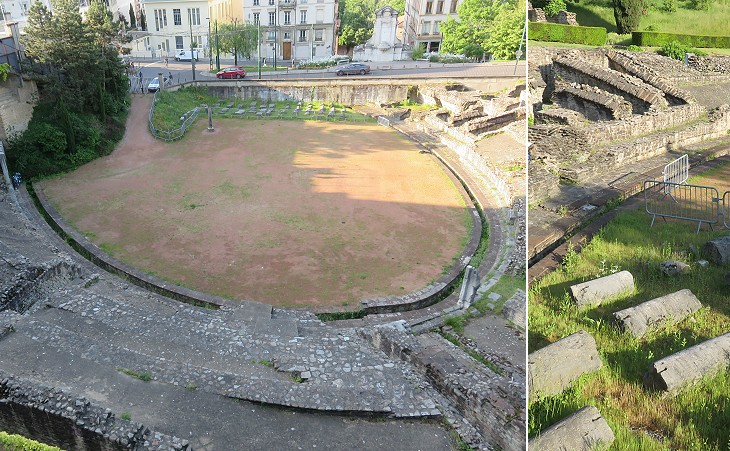 Lugdunum itself, then, (a city founded at the foot of a hill at the confluence of the River Arar and the Rhodanus), is occupied by the Romans. And it is the most populous of all the cities of Celtica except Narbo; for not only do people use it as an emporium, but the Roman governors coin their money there, both the silver and the gold. The temple that was dedicated to Caesar Augustus by all the Galatae in common is situated in front of this city at the junction of the rivers. And in it is a noteworthy altar, bearing an inscription of the names of the tribes, sixty in number; and also images from these tribes, one from each tribe, and also another large altar.
Strabo - Geography - Book IV - Loeb Edition
Nero Claudius Drusus, a stepson of Emperor Augustus, made the town his headquarters for a series of campaigns in Germany. In order to promote the acceptance of the Roman rule among the Gauls he established a yearly gathering at Lyon of the leaders of the tribes who lived in the new territories. This council was aimed at celebrating the loyalty of the Gauls to Rome and its Emperor and at the same time at establishing a communication channel between the Romans and the Gauls, especially through a small body of magistrates/priests of Gallic origin who were in charge of the preparation of the council. Drusus ordered the construction of a facility for this council at Condate; it consisted of an altar and of a sort of amphitheatre where a large audience could watch the ceremonies. The venue was inaugurated on August 1, 10 BC. We may assume it was surrounded by gardens, baths, lodgings and other facilities. 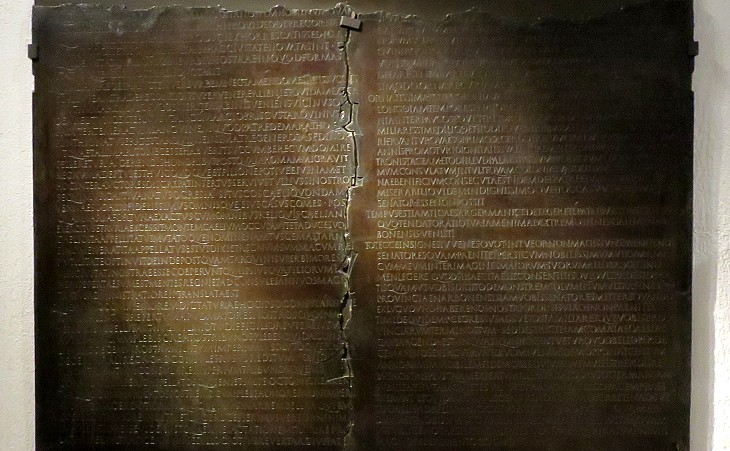 Gallo-Roman Museum of Lyon-Fourvière: bronze tables with the text of a speech delivered in the Roman Senate by Emperor Claudius

Emperor Claudius, son of Nero Claudius Drusus, was born at Lyon on the day the Sanctuary of the Three Gauls was inaugurated. He was raised in Rome and when almost by accident he became emperor he took initiatives to celebrate his father and his deeds and in particular his action to turn the Gauls into loyal supporters of the Empire. In a speech in the Senate he proposed the granting of political rights, including membership of the Roman Senate, to worthy citizens of the new provinces in Gaul, similar to what had been done in Gallia Narbonensis. The text of his speech was eventually carved in bronze tablets, some of which were discovered in 1528 in the proximity of the Sanctuary of the Three Gauls (see other bronze tables with lengthy inscriptions of Roman laws or Senate proceedings at Italica and Urso in Spain). The town was renamed Colonia Copia (Prosperous) Claudia Augusta Lugdunum.
The decision by Emperor Claudius to invade and permanently conquer Britain in 43 AD can be seen as one which was made in the interest of Gaul because it increased the security of its northern ports and it bolstered its potential trade market. 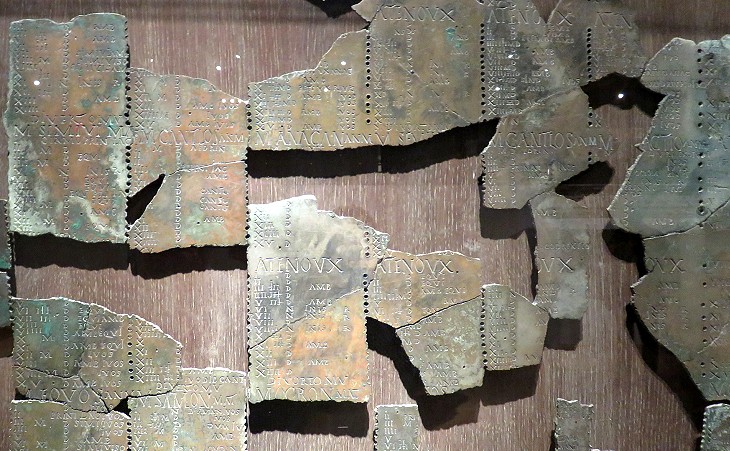 Gallo-Roman Museum of Lyon-Fourvière: Coligny Calendar (IInd century AD); the fragments of this bronze calendar were found mixed with those of a statue

If anyone concentrates on the fact that the Gauls resisted the divine Julius in war for ten years, he should consider that they have also been loyal and trustworthy for a hundred years, and had this loyalty tried to the utmost when we were in danger.
This excerpt from Claudius's speech expresses a general Roman policy which viewed the presence of a variety of cultures as a strength, rather than a weakness of the Empire, provided that these cultures accepted some basic rules.
The Gauls had a lunisolar calendar and they were allowed to continue to celebrate the beginning of the new year and other festivities according to their old calendar. The bronze tables which were found in 1897 at Coligny near Lyon cover a period of five years and are written in Latin, but the names of the months are those of the old calendar. Their layout is similar to Fasti Verulani, a public calendar found at Veroli near Rome. The Gallic year most likely started with the summer solstice and the months were divided into two equal periods, contrary to the Roman usage. 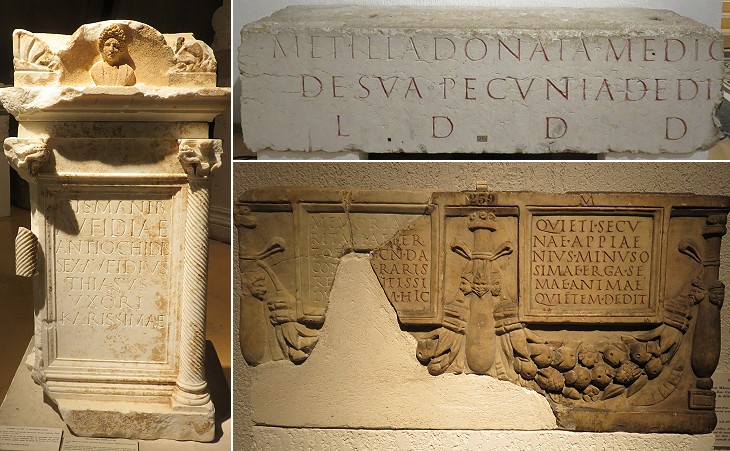 The Greeks and the Romans disapproved of polygamy and they considered it typical of barbarian peoples and an element of weakness of society. It is unclear whether polygamy was common in Gaul before Caesar's conquest, but it certainly disappeared in the large towns of Roman Gaul. At Lyon many funerary inscriptions prove the social importance of marriage by celebrating the qualities of wives. Some of their names (Antiochidis, Zoenis) suggest a Greek origin. Their role in society was not limited to taking care of their husband and children. Metilla Donata was a doctor, perhaps not just a midwife as Scribonia Attice at Porto, but a physician for women and children. 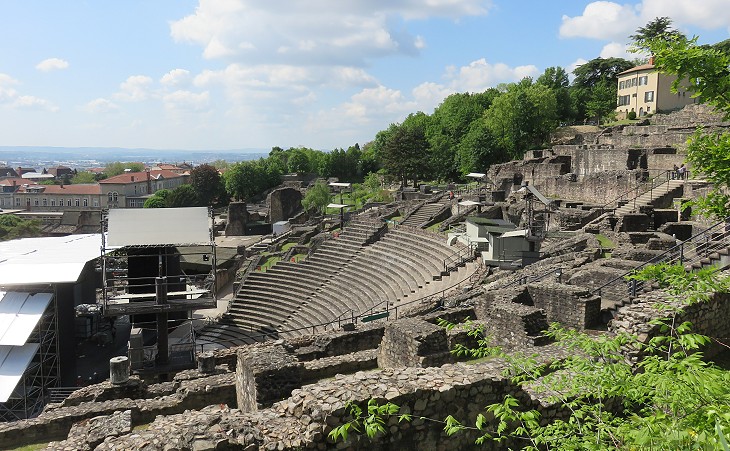 In 1887 the new landlord of a house on the hill of Fourvière was puzzled by the curved shape of walls which closed his garden. He discovered that their structure was an ancient one and by excavating in other parts of his property he came to the conclusion they were part of a Roman amphitheatre where according to tradition Christian martyrs were put to death in 177. His view was generally accepted, although some archaeologists felt that the walls were more consistent with the design of a theatre. It was only in 1933 that a major excavation campaign began; it eventually led to unearthing the seating section of a large theatre. 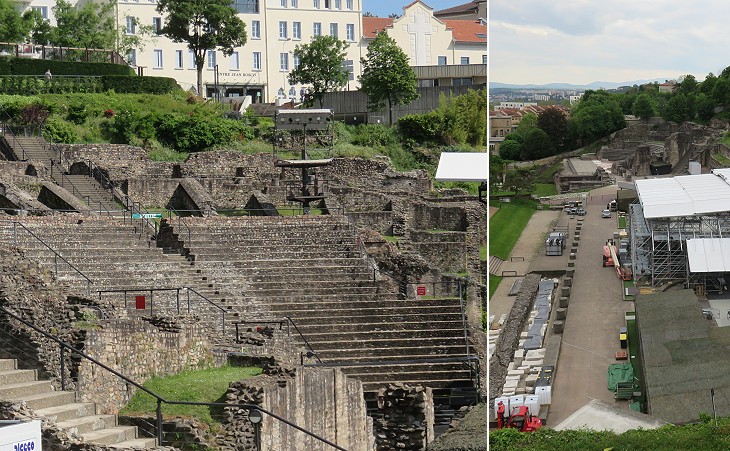 Great Theatre: (left) seating section; (right) evidence of a colonnade behind the stage

Perhaps because the excavations were not carried out in a very scientific manner today archaeologists are in doubt about the exact dating of the theatre, in the lack of a revealing inscription/statue/relief. A widely accepted opinion which indicated Emperor Hadrian as the patron of the facility has lost ground in favour of an initiative by Claudius. 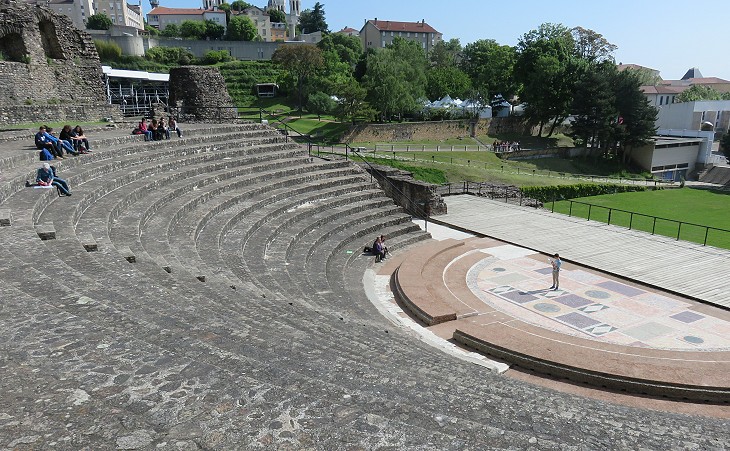 Some walls of a Roman building on the Fourvière hill near the site of the Great Theatre were identified in the XVIth century and they too were thought to belong to an amphitheatre. When the area was excavated in the XXth century a small theatre was identified; today it is defined as an odeon, a closed hall for music and poetry. Adjoining theatres and odeons can be seen in other Roman towns, e.g. at Pompeii and Philadelphia (Amman) in Jordan. 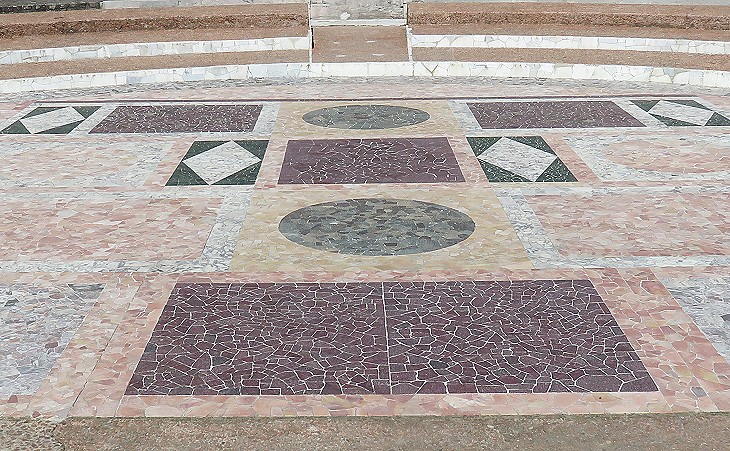 Odeon: marbles of the "orchestra"

Based on elements found during the excavations, archaeologists have reconstructed the likely aspect of the orchestra, the semicircular space between the seating section and the stage. Eleven types of marbles have been identified, including some from Tunisia (Simitthus) and Greece (Karistos).
In 1975 the Great Theatre and the Odeon became part of an archaeological area which includes Gallo-Roman Museum of Lyon-Fourvière, a large museum, some exhibits of which are shown in this and in another page. 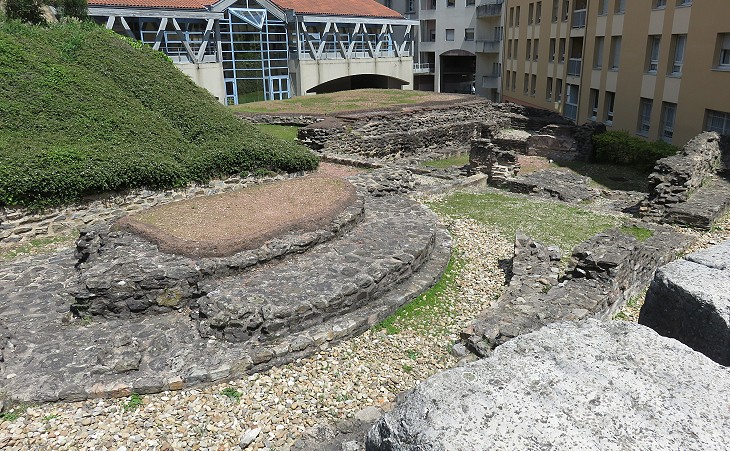 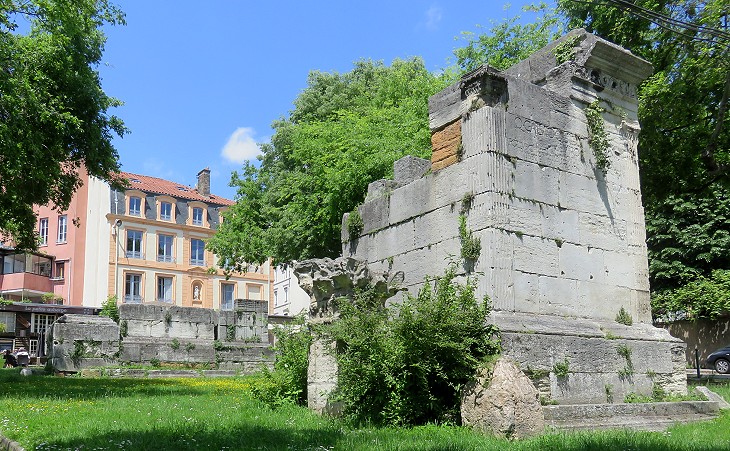 Reconstructed mausoleums at Choulans; a detail is shown in the image used as background for this page

Seven necropolises have been identified at Lyon. Ten mausoleums were discovered in 1885 along the road built by Agrippa to link Lyon with Saintes. Five of them were reconstructed in a square near their original location. They have the aspect of a small temple and are similar to brickwork tombs near Rome, but they were faced with a fine local limestone. 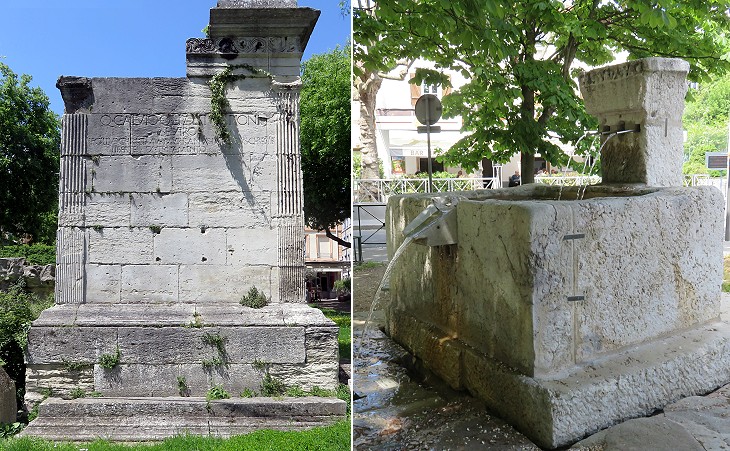 One of the mausoleums retains a dedicatory inscription which shows the level of social mobility in the Roman Empire; Turpion was a freedman who managed to become one of the Seviri Augustales, a college of six magistrates (sex viri) who were chosen among the wealthiest freedmen of the town and who were in charge of the organization and financing of ceremonies in honour of the emperors. The mausoleum was erected by five slaves whom Turpion had freed. While a slave working in a rural location had few chances to escape from a life of misery and hard labour, a slave working in town had more opportunities to become the trusted assistant of his master and to be eventually freed (you may wish to see some inscriptions at Formia with information on the careers of some freedmen).
A fountain bearing the name of Emperor Claudius was discovered in 1983 and it was reconstructed in a nearby modern garden. 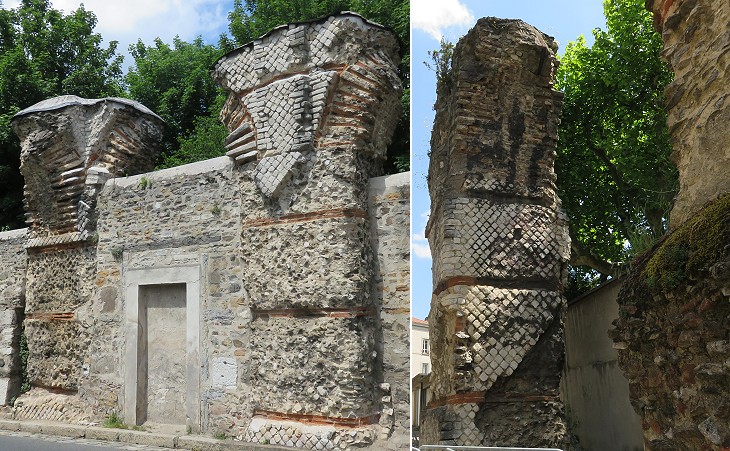 Arches of the Roman Aqueduct of Giers in Rue Radisson

At least three aqueducts supplied Fourvière, the Roman town on the hill with water. The Aqueduct of Giers is the longest one having a length of 85 km (53 mi). Its source, the Giers, a tributary of the Rhône, is located to the south-west of Lyon. The aqueduct passes through eleven tunnels some of which are pretty long. It was most likely built by Claudius.
The decline of Fourvière began at the end of the IIIrd century when Emperor Diocletian reorganized the administrative division of the Empire and gave great importance to Trier to the detriment of Lyon. Eventually the aqueducts were no longer maintained for lack of resources and the inhabitants of Fourvière moved to a strip of land along the Saône at the very foot of the hill, which today is known as Vieux Lyon and which became the centre of the medieval town. 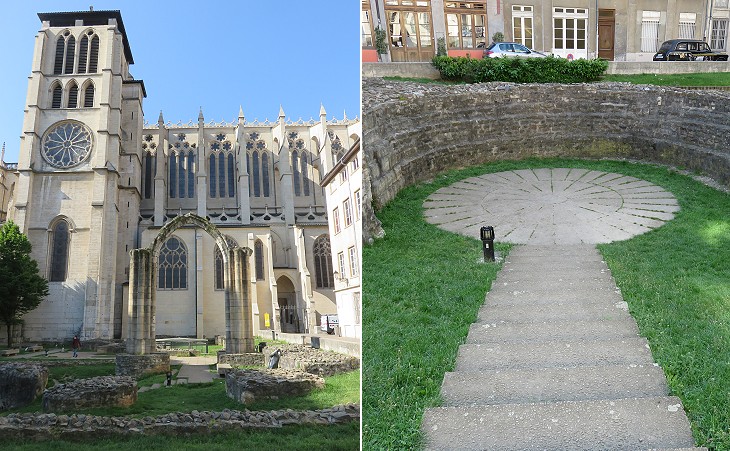 The abandonment of the hill may explain why no early Christian churches were found there. It is also likely that the inhabitants of Fourvière mainly belonged to the upper classes of Roman origin who retained the traditional beliefs until the end of the IVth century.

Move to Exhibits of the Gallo-Roman Museum of Lyon-Fourvière or to Vieux Lyon.