- Senglea (Isla)
(detail of a statue of St. Catherine of the Wheel in the parish church of Zejtun) 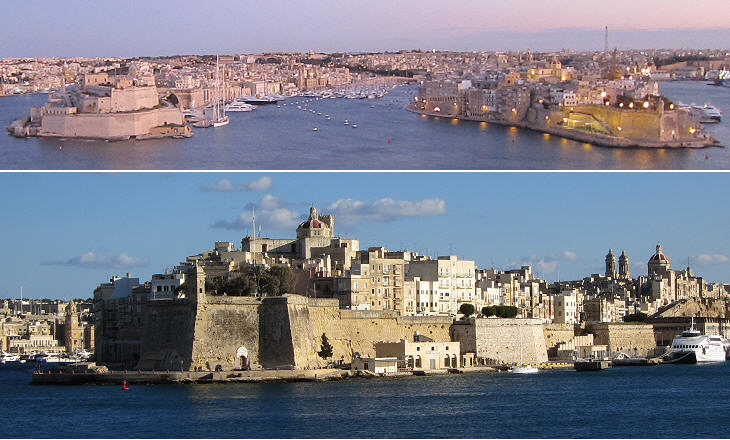 The deep inlet between the peninsula where Borgo was located and Isola (Ital. for island), another peninsula, was known as Porto delle Galere (Galley Harbour, today Dockyard Creek). The harbour was protected only by Fort S. Angelo, a small Norman castle at the tip of Borgo. The Knights realized that the harbour and Borgo required better defences. They strengthened the castle turning it into a modern fortress and they built massive bastions to protect the land access to Borgo.
In 1551 a small Ottoman army landed on the island, but its commanders, after having seen the new fortifications, preferred to re-embark their troops and head for Gozo, the island to the north of Malta, where they seized the citadel.
Grand Master de Homedes was convinced by Pietro Pardo, his Italian military engineer, that Isola, which at the time was totally unpopulated, needed to be fortified to ensure that a large Ottoman army could not occupy it and fire at the ships in the harbour from there.

Isola is a peninsula narrower than Borgo and for this reason the construction of walls to check the access to it by land required the construction of just one bastion. The current appearance of the bastion does not reflect that which it had in the XVIth century because of changes made in the XVIIIth century and by the British after 1800.
The rationale behind the construction of St. Michael's Bastion was to delay the final Ottoman assault on Borgo. The Grand Masters were vassals of Emperor Charles V (every year they presented him with a falcon) and they relied on receiving help from the Spanish Viceroy of Sicily, so gaining time was a crucial factor for repelling an Ottoman attack. 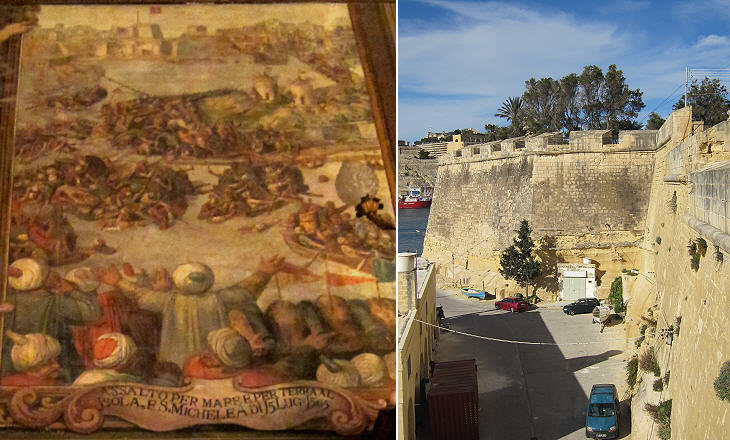 (left) Fresco by Matteo Perez d'Aleccio in the Grand Masters Palace at Valletta showing the Ottoman assault on Isola by land and sea on July 15, 1565. The fresco shows the chain between the two peninsulas which prevented Ottoman ships from entering Porto delle Galere and the palisade built by the Knights at the last minute at Isola; (right) walls at the tip of Isola which replaced the palisade

The strategy developed by Pardo was tested in 1565 when a major Ottoman army landed on Malta in May. The enemy laid siege to Fort S. Elmo which fell on June 23 after it was virtually demolished; the Ottomans then turned their attention to Isola and Borgo, but they dispersed their efforts. A major assault on Isola failed and a subsequent one on Borgo was repelled by the personal intervention of Grand Master de Valette. In September Don Garcia Alvarez de Toledo landed on Malta with a relatively small relief army, but the Ottomans feared of being caught between two lines of fire and they lifted the siege and left the island. 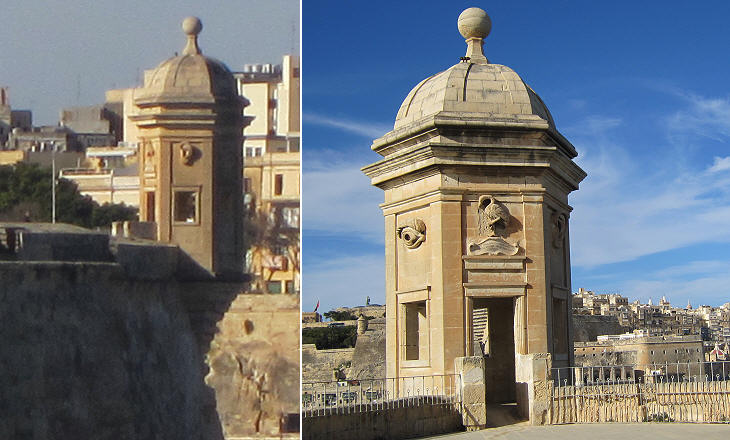 The fortifications which were built at the tip of Isola after the Great Siege were not as impressive as those of Fort S. Angelo; they were in part demolished during the British rule to make room for more dockyards. Yet they attract visitors because of a vedette, a sentry box positioned beyond the walls in order to have a commanding view over all the other fortifications (the inscription above the entrance states pluribus arcibus adstans - opposite many fortresses).
Gardjola was built in 1692 and it was decorated with reliefs showing eyes, ears and pelicans. The first two symbols are a clear reference to vigilance, the pelican is a symbol of the Passion of Jesus Christ, but in this context it indicates maternal care (the sentry box cares for the Maltese).
The pelican and the inscription can be seen in the image used as background for this page. 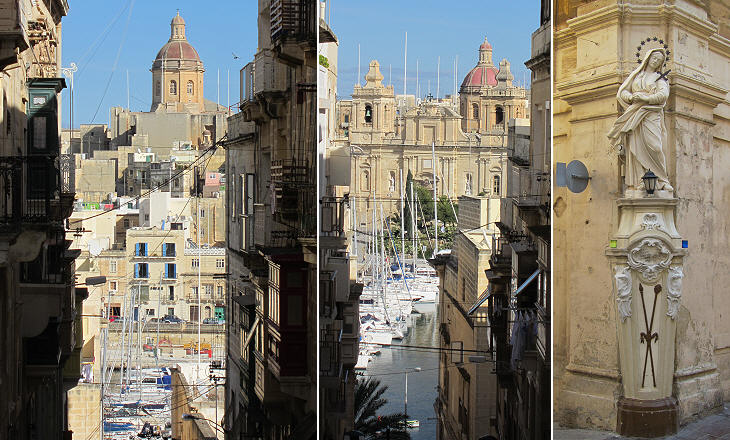 (left/centre) Views of Dockyard Creek and Borgo churches (left: the Annunciation; right: St. Lawrence's) from the main street of Senglea; (right) a tabernacle in the main street

At the time of the Great Siege Isola was still scarcely populated and two windmills were its only large buildings. Eventually a town was built on the peninsula and it was named after Grand Master de la Sengle who completed the construction of St. Michael's Bastion. Senglea is made up of just one street at the top of the ridge from which many narrow streets go down to the dockyards with nice views over the monuments of Borgo. 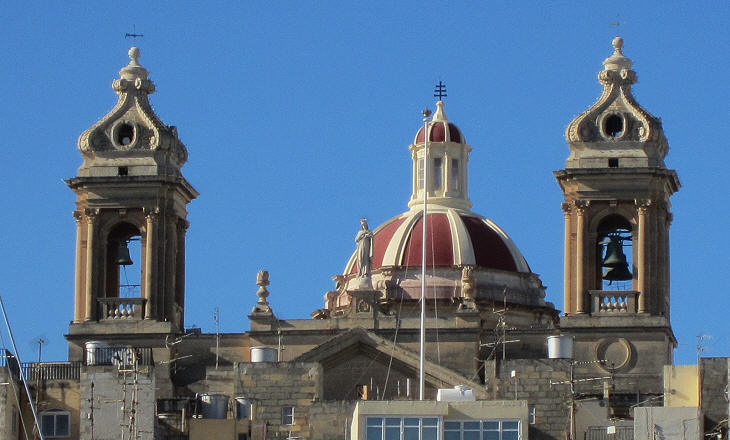 Our Lady of Victories seen from Borgo

The main church of Senglea was built in the XVIIth century, but it was modified significantly in the two following centuries. Eventually it was almost totally destroyed during WWII by Italian/German bombings. Its design resembles that of many Roman churches; when it comes to the colour of domes however at Malta they had a liking for S. Maria del Fiore in Florence, rather than for St. Peter's in Rome.

St. Philip Neri: (left) seen from Fort S. Angelo; (right) from the street leading to the tip of the peninsula

The church was part of a convent of the Oratorians, members of the order founded by St. Philip Neri, but it was called S. Maria di Porto Salvo (Safe Haven) by the sailors who returned home from their journeys. The church (late XVIth century) stands very near the tip of Senglea and it is visible from a great distance. It was spared by WWII bombings.