- Malvasia (Monemvassia)
(detail of a 1651 engraving by Marco Boschini)

August the Fifth (1675); we parted from Cerigo; and doubling the Cape Saint Angelo (today Malea), we passed within sight of Malvasia, a strong Castle, built upon a Rock on the shore of Morea, or Peloponesus. Then (..) we left on our right hand Antemilo, and further off Milo, which is reported to have one of the best Ports in the World, and now a refuge for the Corsairs.
A journey into Greece by George Wheler, Esq., in company of Dr. Spon of Lyons - 1682. 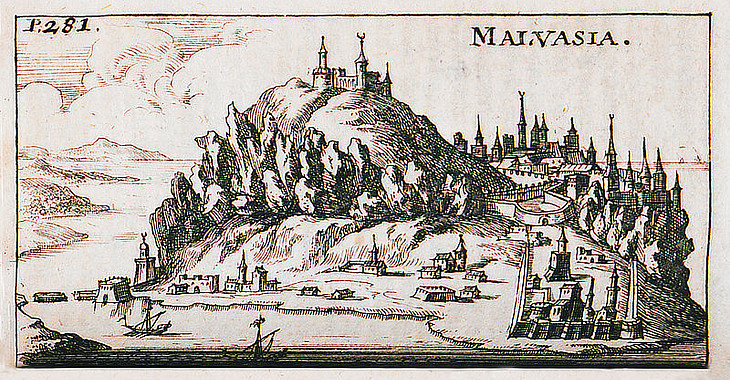 Nauplia of Malvoisie, or Monembasia as it is called by the Turks, is built from the ruins of the ancient Epidaurus Limera, upon a little island. (..) Its port is little frequented at present, because it is not considered as very secure; yet it still maintains some commercial relations with Nauplia of Romania, twenty-six leagues further to the north.
François Charles Hugues Laurent Pouqueville - Travels in the Morea, Albania, and other parts of the Ottoman empire - 1817 edition
March 26, 1805. The name of Monemvasia is derived from its singular situation, which admits only of one approach and entrance on the land side, over the bridge which connects the western extremity of the hill with the main land. (..) The town is divided into two parts, the castle on the summit of the hill, and the town which is built on the southern face of the island, occupying one-third of it towards the eastern end. (..) Monemvasia itself has no harbour.
William Martin Leake - Travels in the Morea - 1830
Monemvassia, the Greek name, is in itself a description of the location as it means one entrance, because there is only one access to it. Malvasia was made up of two parts: Borgo on a little terrace at the foot of the rock and Castello on the relatively flat space on its top. The rock seen from the mainland

The distance of Monembasia from Mistra is two long days journey, which may be estimated at twenty-four leagues. The road lies almost entirely among mountains, on which are large forests of fir, with a great deal of brush-wood and heath. There are also some ponds and woods; but the principal features of the whole country are large rocks of granite. (..) The town may be said to be cased up in the mountains by which it is bounded to the west. Pouqueville
We arrive, at 2.30, in front of the northern side of the island of Monemvasia, which is a bare precipice like the back of Gibraltar. Leake
The Venetians used to say that nature itself had built the fortress and that little was needed to strengthen it. In addition to its position on a high rock it was separated from the interior of the Peloponnese by hardly passable mountains. Above the cliffs there is a considerable space of ground, not level, but sloping upwards, to the crest of the northern side, or back of the island. This space forms the castle, where ten or a dozen guns are mounted. Leake
In general Castello was protected by low walls, but in some spots the rock is so precipitous that the Venetians did not even care to strengthen this natural defence. In 1538 Sultan Suleyman vainly tried to seize Castello and in 1540 he promised the Venetians a lasting peace in return for Malvasia and Napoli di Romania. The Venetian envoy to the peace talks was given authority to surrender Malvasia as a last resort to reach a settlement. From the very beginning he was confronted with a strong request for Malvasia and eventually he gave his consent. A peace settlement was agreed and the two fortresses were handed over to the Ottomans. Their insistence raised some suspicions and after lengthy investigations the Venetians discovered that the authorities granted to their envoy had been leaked to the French Ambassador in Venice, who passed this piece of information to his government. At that time Francis I, King of France, was allied with Suleyman against Emperor Charles V and he decided to let the Ottomans know the latitude of the powers given to the Venetian envoy.

The town is inclosed between two walls descending directly from the castle to the sea. Leake
Malvoisie and malmsey are names of strongly flavoured sweet wines which replaced in Europe the Vin di Malvasia, often quoted in the description of Renaissance banquets. Before the Venetians lost the fortress of Malvasia this wine was shipped to Italy from this port. The walls protecting Borgo no longer reach the fortifications of Castello: they just reach the almost vertical flanks of the rock. 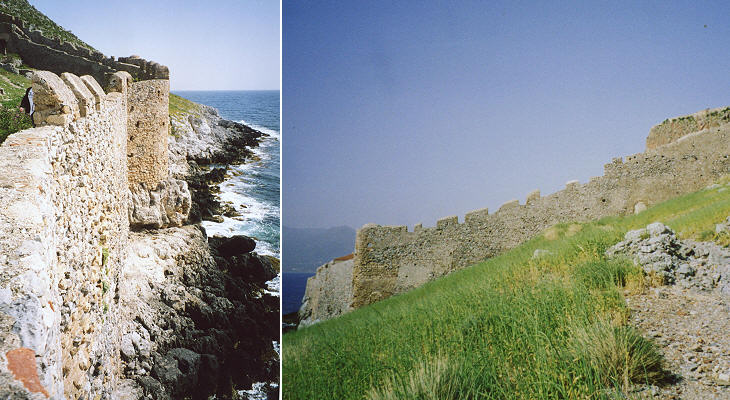 I know not how its wines have obtained their high reputation, as I am informed by Monsieur Roussel the French commercial agent in the town, who is perfectly well acquainted with the country round, and every thing appertaining to it, that they are in reality of a very middling quality. Pouqueville
The town is supplied with fruit and vegetables from Velies, a village on the hills, an hour west of Monemvasia, where are also a few vineyards, which produce a strong wine. That which gave rise to the name of Malmsey has long been extinct here. Leake
The wine was shipped from Malvasia, but it came from the islands of the Archipelago, e.g. Nasso. Enemies trying to assail Borgo from the sea had difficulties in landing because there is no beach and there is little space in which to site a camp. 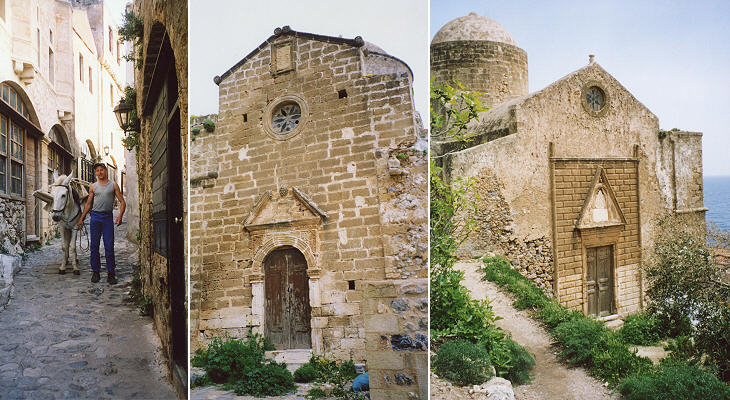 From all parts of Europe travellers resort to Athens, to visit the monuments still remaining of its ancient grandeur. (.. ) Yet how many objects worthy of attention are there to be found in other parts! how many interesting spots well deserving the examination of the curious! As some excuse, however, for this neglect, it may be observed, that the difficulties of travelling in the Morea constantly increase as the distance from the isthmus, or from the ports of Modon or Coron, increases. (..) I shall not enter into long details upon Monembasia, as I only saw it in navigating. (..) It is the seat of a bey, the residence of a metropolitan archbishop, and contains a population of nearly two thousand inhabitants, Turks and Greeks. Pouqueville
The houses are piled upon one another, and intersected by narrow intricate streets. Many of the buildings are of Venetian construction; there are about 300 houses in the town, and 50 in the castle. Leake
During the first Venetian occupation Malvasia was a main trading centre and Borgo had fine houses and churches (the image used as a background for this page shows a Venetian relief in Borgo), but during the Ottoman rule it retained importance only from a military point of view and because of its remoteness very few travellers visited it. 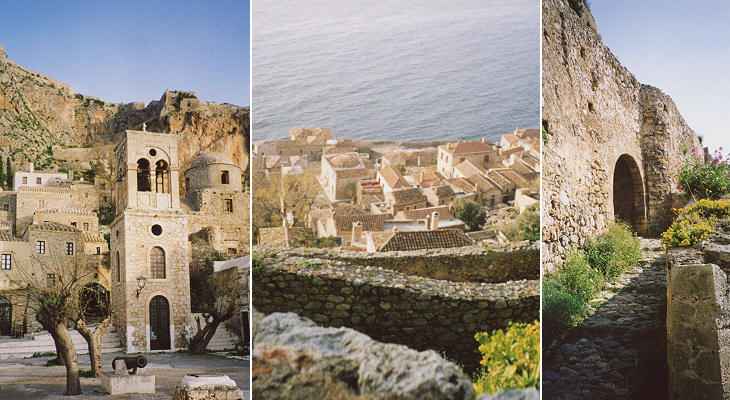 Going up to the fortress

I ascend this forenoon to the kastro, or citadel. It is separated from the town by a perpendicular cliff through which there is a zig-zag ascent cut in the rock. Leake
Notwithstanding its defences Borgo was not an impossible target for a successful assault: what really looked impregnable was Castello. Only a steep and winding road led to it and it was interrupted by several walls. There was no space to place the artillery or to dig trenches or build fortifications.
In 1690 the Ottomans capitulated after a three years' naval blockade, but in 1715 the Venetian commander surrendered without fighting because he was offered generous capitulation terms and the Ottomans complied with them. This approach proved very effective because the demoralized Venetian commanders and their mercenary troops quickly surrendered many other fortresses. The walls and batteries are in a most dilapidated state, and the place is entirely exposed to shells from the opposite mountain; some of those which were thrown by the Venetians are still lying on the ground. Leake
July 1821. The Greeks, however, were the first aggressors in the series of murders and rapine which closely followed the beginning of the Revolution. The very first act of the kind committed, was the murder of a whole company of pilgrims taken on board a Turkish vessel by the Greeks. Then followed the destruction, in cool blood, of nearly the whole of the garrison and population of Napoli di Malvasia, in violation of the most sacred treaties and written assurances of safety for life, and of transportation under protection, at the expense of the Greeks, to the Asiatic coast. The perjured Greeks made no distinction of sex, age, or persons; and even pregnant women were barbarously murdered.
John Madox - Excursions in the Holy land, Egypt, etc. - 1834
The events of 1821 led to a major decline of the town; the fortress had already lost its former importance because of the improvements in artillery. 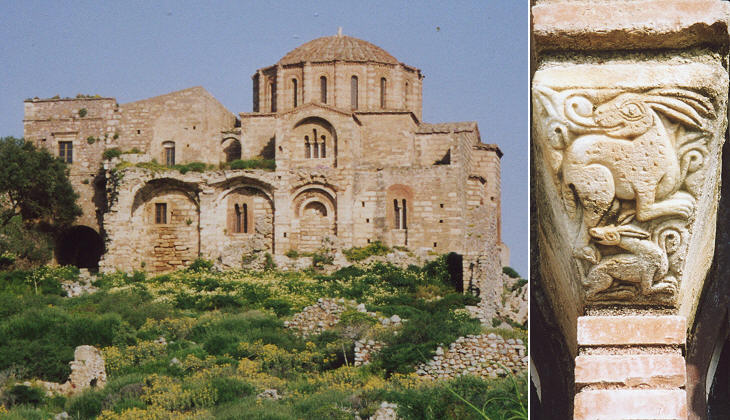 Agia Sophia at Castello and one of its capitals

There still exist some good cisterns and the remains of two or three hundred houses and magazines; among these is the ruin of a large church, which has been converted into a mosque. Leake
There was in the neighbourhood a temple of Esculapius, whither people resorted from all parts of Greece in hopes of obtaining a cure for the diseases with which they were afflicted. It was there, according to Pausanias, that the votive offerings of those who had been cured were suspended, with the mention of the means employed for the cure. (..) Probably the ministering priests at this temple were skilful physicians: perhaps it had been visited, as well as the temples of Cos and some others, by the great father of medicine Hippocrates before he wrote his immortal work. A certain chapel dedicated to St. George, which stands in the neighbourhood, has inherited in part the reputation of the ancient temple. It is much visited by the people around, and they carry with them colyva, (a sort of boiled wheat,) cakes, and wax tapers, as presents to an old papas who is chaplain there; they also give him sometimes a few parats. If he be not a great worker of miracles, at least he cannot be accused of being a great rogue, since he is half starved: this is indeed the case with most of his brethren in the Morea. Pouqueville
The excerpt shows how miserable was the condition of the inhabitants of Malvasia, even before the 1821 catastrophic event.