from Yedikule Kapi to Mermer Kule
(A section of the walls) 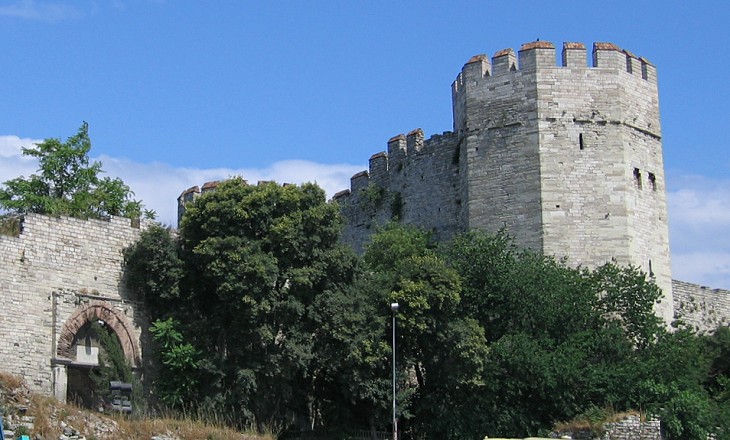 Yedikule Kapi and a tower of the nearby fortress

At the southern termination, near the sea, stands a castle called by the Turks Yeddikuli, the Seven towers, first founded by the Greek emperors, who gave it a name of the same import.
James Dallaway - Constantinople Ancient and Modern with Excursions to the Shores of the Islands of the Archipelago and to the Troas - 1797
Yedikule Kapi is named after the nearby Fortress of the Seven Towers (Eptapyrgon in Greek, Yedikule in Turkish). It was built in 1458 by adding three round towers on the inner side of the walls to four existing towers of the outer side.
The Ottomans built a small fortress by the same name at Thessalonica. 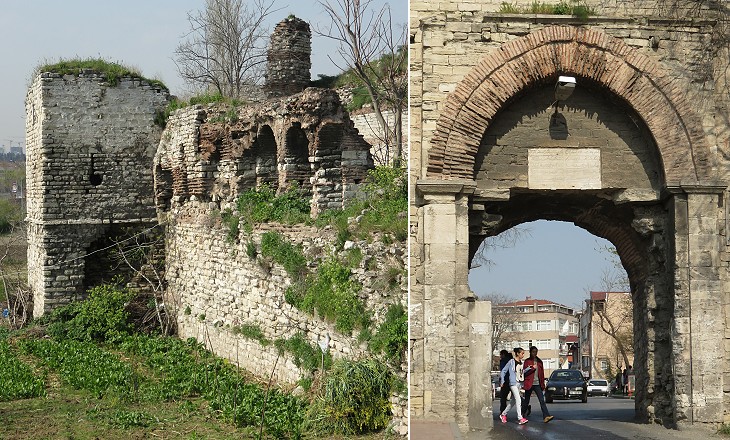 (left) Walls to the left of the gate; (right) Yedikule Kapi, redesigned by the Ottomans

This section of the walls had two gates located a short distance apart. That shown above was used by ordinary people. The other one, the Golden Gate, was reserved to the Byzantine Emperor and to ceremonies and processions. 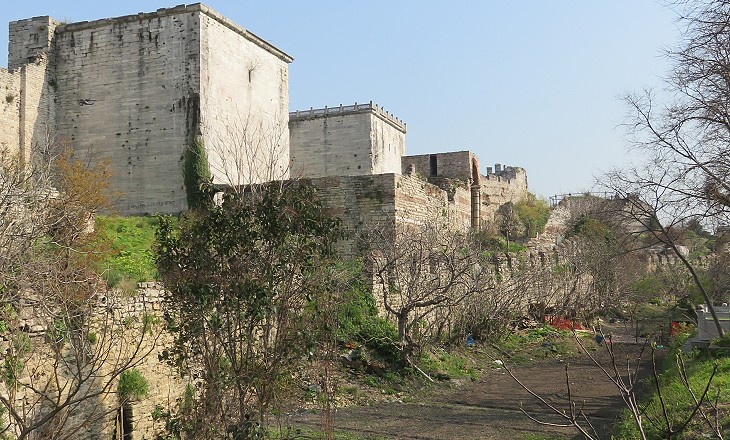 Section of the fortress walls where the Golden Gate is situated

The Porta aurea was a triumphal arch built by Theodosius, upon his defeat of Maximus, and besides the statue of Victory of gilded bronze placed on it, was profusely ornamented with beaten gold. When Mahomed II. in 1458, made the fortress and prison of the Seven towers, he caused it to be walled up. Around the golden gate are columns of granite, and fragments of marble, still retaining much elegance of workmanship. Dallaway
Two imposing square towers protected the Golden Gate, the history of which is still debated. According to a traditional account a triumphal arch was erected in 388-391 to celebrate the victory of Emperor Theodosius against Magnus Maximus and it was eventually incorporated into the walls. More recent studies suggest it was built at the same time as the walls by Theodosius II in ca 413. 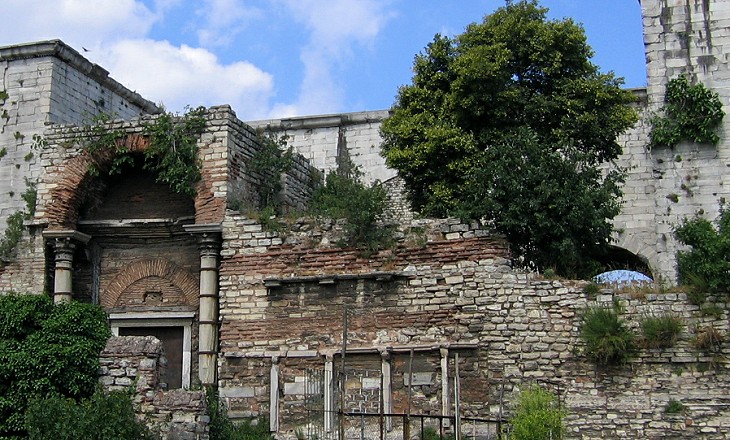 The Golden Gate: in the foreground the outer gate and behind it the central (walled) arch and a lateral one

The Golden Gate was aligned with the inner walls, whereas a smaller gate was opened in the outer walls leaving some space between the two. Fragments of the reliefs which decorated the gate can be seen at the Archaeological Museum of Istanbul. In the current set up of the monument it is hard to figure out the splendour of the ceremonies which took place at the Golden Gate to celebrate military victories or coronations. Some descriptions of these ceremonies indicate that the emperors could reach the gate by boat from the Sea of Marmara.

A close-up view of the outer gate. The image used as background for this page shows a detail of a capital 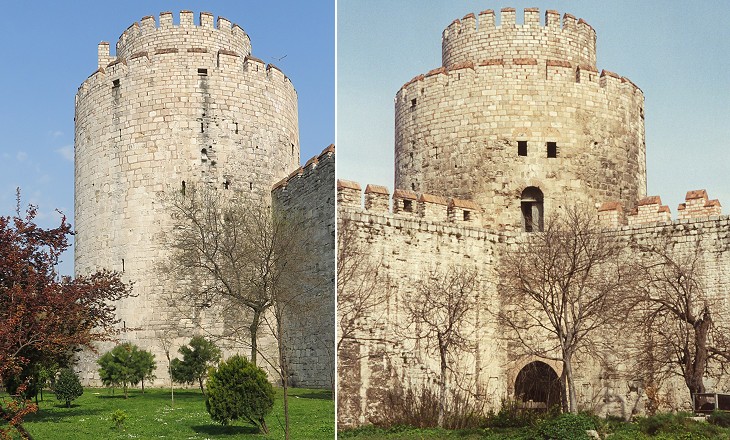 Towers of the fortress

In 1458, Mahommed II. rebuilt a great part with the addition of three to four ancient towers, and appropriated it as a place of safety for his treasures, and as a state prison. The last person of rank confined there was the Russian envoy, at the commencement of the war in 1784. Three of the Seven towers were thrown down by the terrible earthquake in 1768, and have not been restored. The external appearance of this fortress is exceedingly ugly; for the towers, which are vast octagons, are finished by conical roofs, which degrade them to the resemblance of windmills. Dallaway
Three imposing round towers protected Yedikule from attacks coming from the city itself, making clear the real purpose of the fortress, which was to provide a safe haven in case of riots. Similar to the Tower of London, Yedikule was used as a treasure house and as a prison. Similar to the Tower of Galata, those of Rumeli Hisar and other Ottoman fortresses, the towers had a conical roof above the battlement. (left) Minaret of the mosque inside the fortress; (right-above) walls and battlement; (right-below) fragments of Byzantine decorations

In speaking of Constantinople. I have endeavoured to avoid repeating things that have been mentioned by many other travellers; but I trust that in the account given of the Imperial castle of the Seven Towers (..) I am offering details wholly new. (..) The place has been rendered celebrated by many remarkable events, one of the principal of which was the tragical death of Osman the Second, perhaps the most virtuous among all the descendants of the caliphs.
Unfortunate prince! how many times have my footsteps passed over the very spot where thou perishedst by the hands of assassins loaded with thy kindness! (..) A comet which appeared in 1618 carried trouble into his mind and over all the empire. (..) A dream decided his wavering mind. He fancied that as he was seated on his throne, covered with his cuirass and occupied in reading the Koran, Mahomet appeared to him, and with an angry air snatched the book from his hands, threw him upon the ground, and struck him so severely, that unable to raise himself up he could not embrace the knees of the Prophet. (..) The alarm was soon spread, and insurrection began to raise its head on every side. (..) The janissaries seized upon him and dragged him away to the Seven Towers, one of them by the way striking him with his stick. Arrived under the gateway of the castle, the fatal string was thrown round his neck; but he thrust his hand within the noose, and struck down the first who attempted to strangle him: the grand vizier then seized him, the unfortunate sultan was overpowered, and the fatal purpose executed.
Since the death of Osman, the Seven Towers has been the scene of many bloody executions; almost every step taken within its walls recalls some dreadful association. (..) Towers filled with irons, with chains, with ancient arms, tombs, ruins, horrible dungeons, cold and silent vaults, a pit bearing the name of "The well of blood", the funereal cry of owls and of vultures, mingled with the roar of the waves, such are the objects, such the sounds, with which the eye and the ear are familiarised in these dreary abodes.
François Pouqueville - Travels in the Morea, Albania, and other parts of the Ottoman Empire - 1805 - translation by Anne Plumptre. 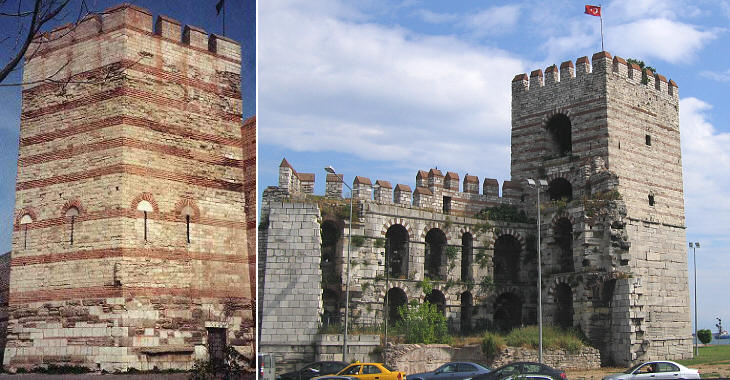 Mermer Kule (marble tower) was the southernmost tower of the land walls. It owes its name to the ancient marble slabs placed at its base. The junction with the maritime walls along the Sea of Marmara was protected by a small castle which is now cut off from the other fortifications by Kennedy Caddesi, a large busy road by the sea.

Move to:
Introduction to this section
From the Golden Horn to Top Kapi
From Top Kapi to Yedikule Kapi
The Maritime Walls