- Palermo - Oratories
(left) Temple to Hercules at Agrigento; (right) detail of the apse of Palermo's Cathedral 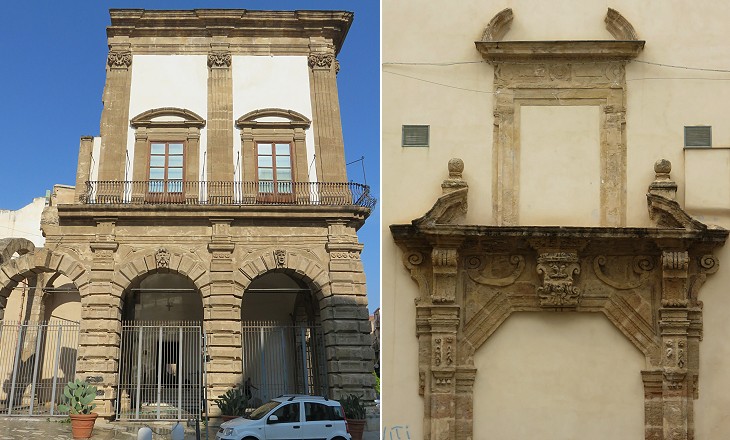 Oratories in the sense of halls for prayers, distinct from churches, have always existed (e.g. the "chapels" near S. Gregorio al Celio). In the XVIth century however they acquired another feature in the sense that they often belonged to a confraternity, an association of lay members aimed at promoting Christian charity or piety activities. Nobile, Primaria e Real Compagnia del Crocifisso was founded in 1541 with the purpose of comforting criminals in the days prior to their execution, similar to Misericordia di S. Giovanni Decollato in Rome. The members of this confraternity were known as Bianchi because they wore white hoods. 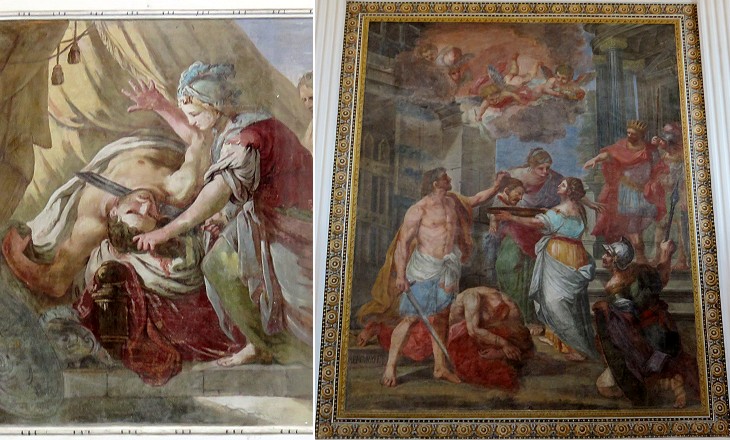 Criminals spent their last three days in the premises of the confraternity where they were helped to accept their fate and where they prayed for the remission of their sins. They could not distance their minds from their imminent death because the decoration of the oratory, in line with a general fashion, had many gruesome depictions of beheadings. 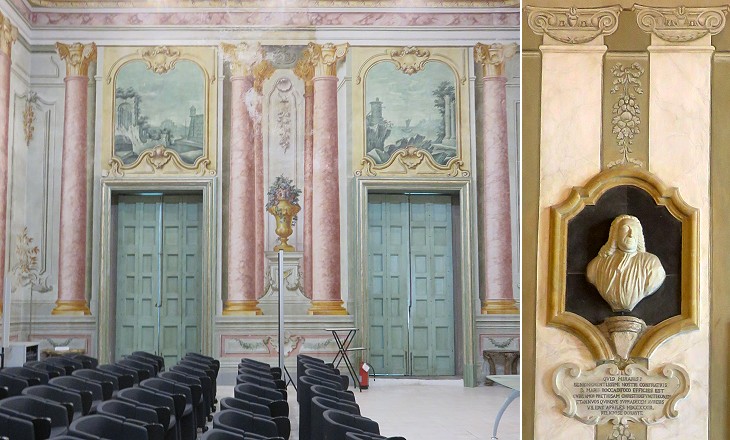 Oratorio dei Bianchi: (left) main hall with a trompe l'oeil by Gaspare Fumagalli; (right) bust of one of the members of the brotherhood. The inscription most rightly begins with the words "Quid miraris?" (What are you seeing?) and then goes on with a short obituary

Beneath the surface of very pious aims, confraternities very often offered their members opportunities for gatherings where they strengthened political, social and business bonds. At Oratorio del SS. Crocifisso in Rome prayers were accompanied by music and the semi-dramatic musical composition known as oratorio was developed there. This practice soon spread to other confraternities including that of Oratorio dei Bianchi. 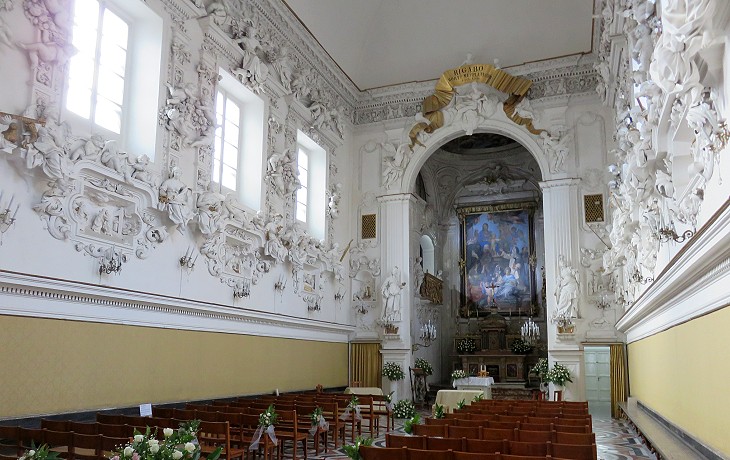 July 1790. The Oratorio of Sta. Zita is crowded with basso relievos, in plaster; and contains a large picture, by Carlo Maratti.
Sir Richard Colt Hoare - A Classical Tour through Italy and Sicily - published in 1819.
During the XVIIth century the making of stucco statues and reliefs was greatly improved. In particular Gian Lorenzo Bernini utilized this lightweight material to design angels and other flying subjects which were executed by his assistants, e.g. at S. Andrea al Quirinale.
Giacomo Serpotta (1656-1732), a sculptor from Palermo, developed allustratura, a technique for covering stuccoes with a thin layer of wax and marble powder which made them shine. After some works in chapels in 1686 he was commissioned with the decoration of Oratorio di S. Cita (or Zita). 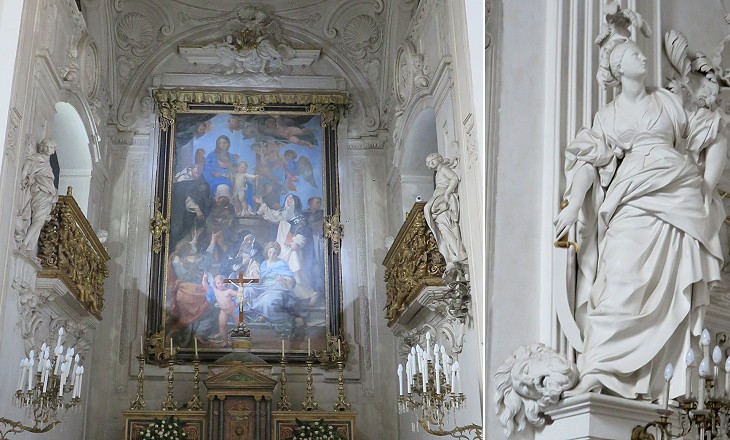 Oratorio di S. Cita: (left) main altar with Our Lady of the Rosary and Saints (1695) by Carlo Maratta, the leading painter of his time in Rome; (right) Judith by Giacomo Serpotta; it was added in 1718

St. Zita lived in Lucca, in Tuscany in the XIIIth century. The citizens of that town who lived in Palermo dedicated a church to her, which was eventually acquired by the Dominicans, who rebuilt it in the early XVIIth century. The decoration of the Oratory celebrates Our Lady of the Rosary who according to tradition appeared to St. Dominic in 1208 and introduced him to the practice of the rosary.
The Book of Judith was endorsed as a holy text by the Council of Trento in 1546. The brave woman was seen as a symbol of unwavering faith and her depiction in churches was promoted by the Counter-Reformation 1577 guidelines on the layout and decoration of churches (Instructionum Fabricae et Supellectilis ecclesiasticae by Cardinal Charles Borromeo). She continued to be a preferred subject for works of art well into the XVIIIth century (you may wish to see a dramatic painting by Caravaggio - it opens in another window, now at Galleria Nazionale d'Arte Antica di Palazzo Barberini). 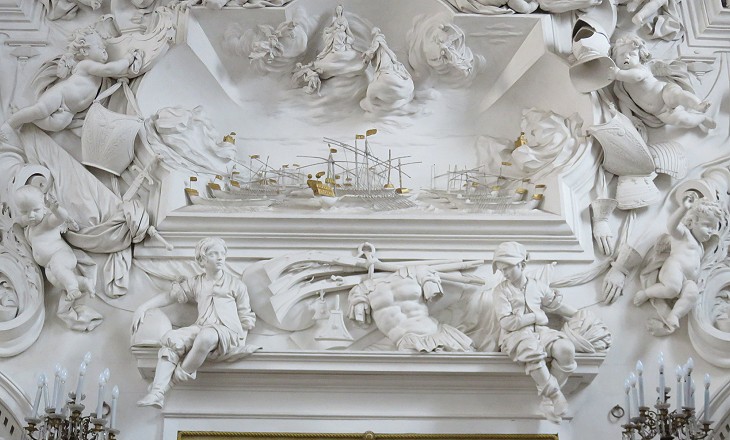 Oratorio di S. Cita: The Battle of Lepanto and above it Our Lady of the Rosary and St. Dominic (see the same subject in a modern painting in S. Maria del Rosario in Rome)

The Christian victory at the Battle of Lepanto was attributed to Our Lady of the Rosary, hence Serpotta dedicated a large relief to show the event. Some parts of the ships were gilded in order to make the scene more lively. 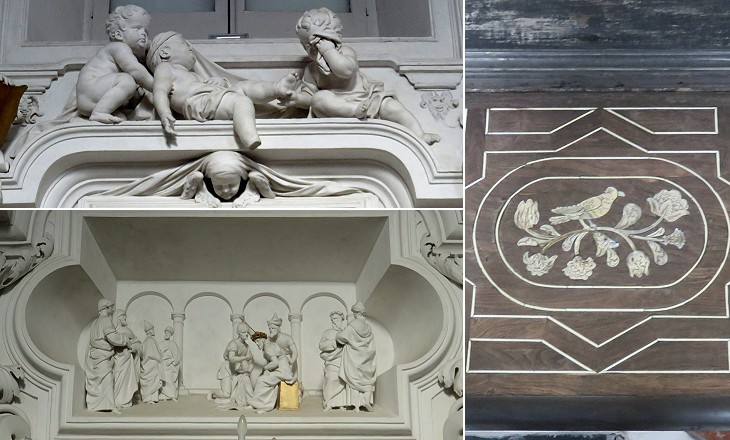 Oratorio di S. Cita: (left-above) mourning putti; (left-below) Flagellation of Christ (the image used as background for this page shows a detail of it); (right) mother-of-pearl decoration of the benches

There are no records of Serpotta having visited Rome; his works however show that he was familiar with the use of putti to embellish funerary monuments. Another interesting aspect of the decoration of this oratory is the very theatrical frame inside which scenes from the Life of Jesus are depicted.
Although a stay in Rome is not documented, there are sufficient indications that he spent a few years there in his youth and so studied sculpture at the fountain-head. (..) His figures are often reminiscent of Roman Baroque sculpture, some of Raggi, others of Ferrata. (..) All of them, however, are imbued with a delicacy and fragility, a simple sensual charm and grace. (..) Serpotta was a great master of the putto; playing, hugging, weeping, flying, and tumbling, they accompany every one of his decorations, spreading a cheerful and festive atmosphere. (..) A part of this pattern is often formed by deeply receding reliefs in which tiny figures appear as if in a peep-show.
Rudolf Wittkower - Art and Architecture in Italy 1600-1750 - Penguin Books 1958 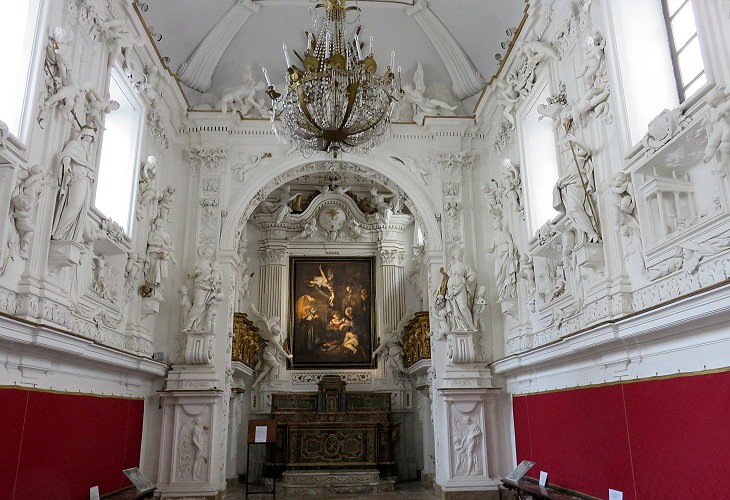 With the decoration of the Oratory of S. Lorenzo at Palermo Serpotta inaugurated that long series of church interiors where he covered the walls with stucco figures, and it is for these decorations that he is famed. (..) As a rule, his principle of organization is simple: the stuccoes - statues, reliefs, and decorations - seem to cover the walls like creepers, producing the effect of a rich and diffused pattern.(..) Possibly nowhere else has Italian sculpture come so close to a true Rococo spirit. Wittkower
This oratory belonged to Compagnia di S. Francesco. The initial aim of the confraternity was similar to that of Congregazione di S. Maria dell'Orazione e Morte in Rome, i.e. to bury the abandoned dead. Eventually the members decided to limit themselves to attending the processions of the nearby Franciscan church. In 1699 Serpotta was commissioned with the decoration of the oratory which is regarded as his masterpiece. In 1969 the early XVIIth century painting by Caravaggio on the altar was stolen and because it was never recovered it was replaced by a modern copy. 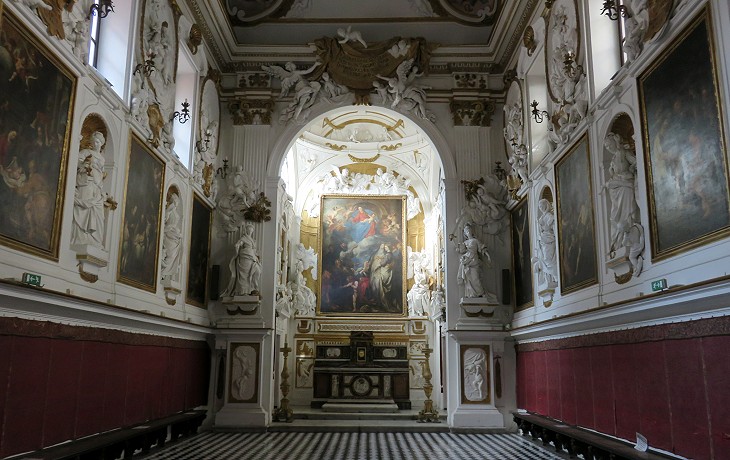 Compagnia del SS Rosario di S Domenico. This is a small Oratorio close to the last mentioned Church and lined with good pictures. The High Altar piece is by Vandyck and called S Maria del Rosario. (..) The Stucco work is finely executed by Serpotta who particularly excelled in that kind of decoration.
Mariana Starke - Travels in Europe for the Use of Travellers on the Continent and likewise in the Island of Sicily - 1838 Edition - based on a travel to Sicily made in 1834.
This confraternity had the purpose of promoting the Dominican Rosary, a tool consisting of a string of knots which was used for counting prayers, and its oratory was near that of S. Cita and similarly decorated with an altarpiece portraying our Lady of the Rosary. 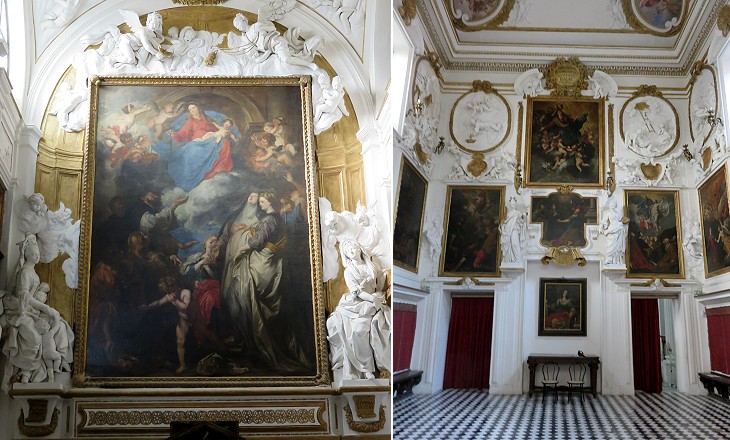 Serpotta was a member of the confraternity, similar to other artists, mainly painters. He had to take into account that the institution already owned many valuable paintings and therefore his redesign of the oratory in 1714-1717 was not based solely on stuccoes as in S. Cita and S. Lorenzo. 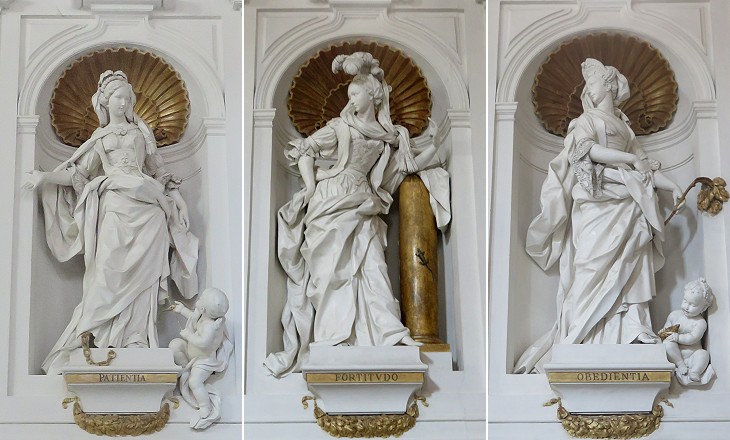 Oratorio del Rosario di S. Domenico: statues of Patience, Strength and Obedience, some of the "Fruits of the Rosary", i.e. virtues associated with a series of prayers

Serpotta placed his statues inside niches which existed already; they were gilded in order to give more evidence to the heads of the statues. They bring to mind some early Renaissance Roman reliefs depicting niches which also were partially gilded. 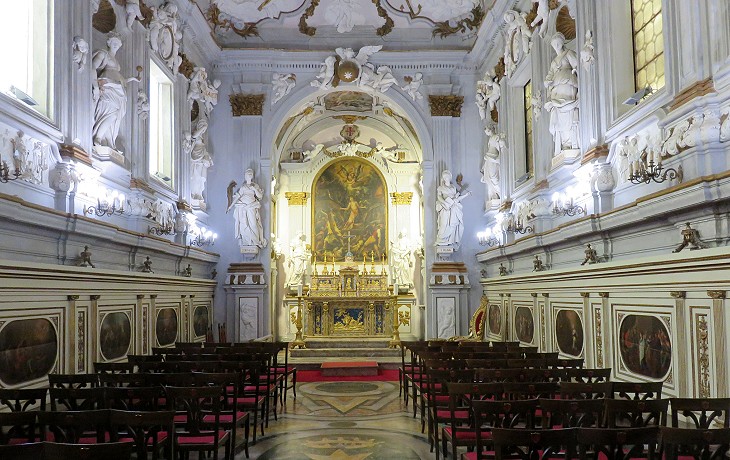 Oratorio di S. Caterina exhibits a pleasing style, and good design. Colt Hoare
None of his Sicilian contemporaries comes anywhere near equalling his quality, neither his collaborator Domenico Castelli, nor his son Procopio who carried on the paternal tradition. Wittkower 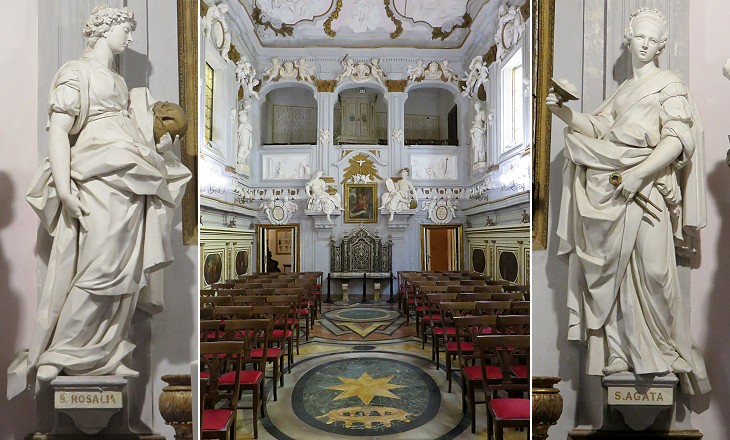 Oratorio di S. Caterina d'Alessandria o della Ruota: (left) Rosalia, the main patron saint of Palermo who holds a skull, a reference to her eremitic life; (centre) rear part of the oratory and on the floor a marble inlay depicting the wheel of St. Catherine; (right) Agatha, one of the four minor patron saints of the town, who holds the pincers by which her breasts were cut and in the other hand a plate with her breasts

One wonders what Cardinal Borromeo would have thought of the decoration of this oratory which formally complied with his recommendation to depict the sufferings experienced by the martyrs, but it actually was an unbridled display of luxury.