You may wish to see an introductory page to this section or to Palermo first.
I have now pointed out the principal churches in Palermo: to enter into further details would be tiresome; but there are, perhaps, one hundred more, any of which would be sufficient to give celebrity to a town; but in Palermo they are thought nothing of, being so eclipsed by those I have mentioned.
Sir George Cockburn - A Voyage to Cadiz and Gibraltar: up the Mediterranean to Sicily and Malta in 1810/11. 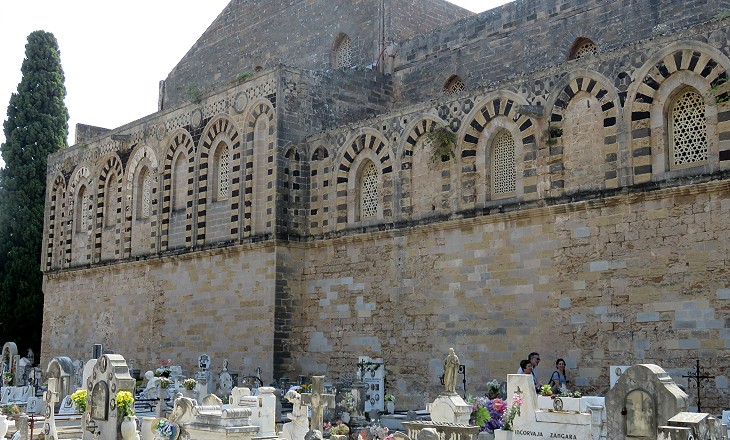 The Norman kings of Sicily promoted the construction of many churches in Palermo where it is said they found 300 mosques. Almost all of these churches were replaced by new ones or were significantly modified, e.g. the Cathedral.
S. Spirito was built in 1178 in the southern environs of the town and it adjoined a Cistercian abbey which was eventually abandoned. In the XVIIIth century it was turned into the funerary chapel of a large cemetery, without its overall structure and external decoration being altered. 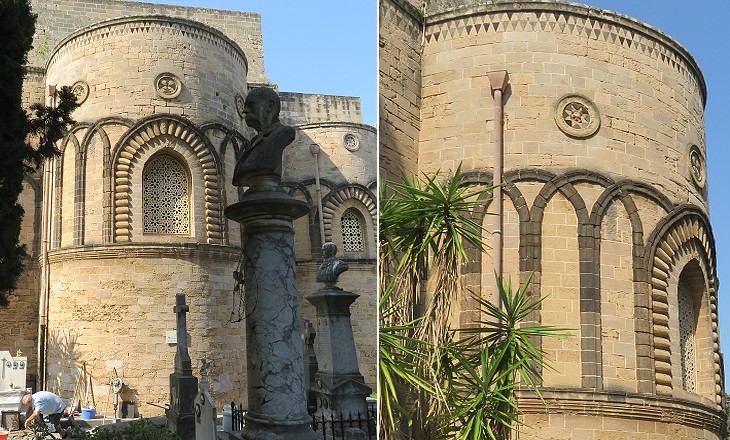 The use of interlacing arches and black lavic stones is typical of the most famous Norman buildings, i.e. the Cathedrals of Palermo, Monreale and Cefalù. According to tradition in 1282 a French soldier verbally abused a Sicilian woman in this church; the ensuing brawl led to the Sicilian Vespers and eventually to the throne of Sicily being offered to Peter III, King of Aragon. 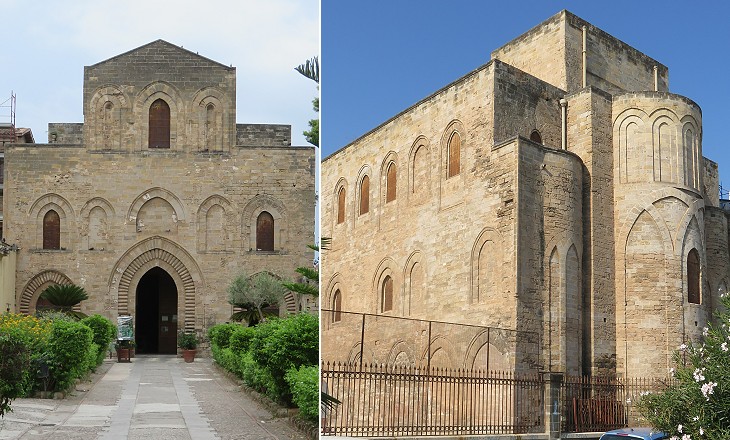 This church was built during the short reign of Tancredi (1189-1194), the last Norman king of Sicily, who was buried there. It was assigned to the Cistercians and it was situated in a rather unpopulated part of the La Kalsa quarter. In 1197 Henry VI, German Emperor and new King of Sicily expelled the Cistercians and gave the church and the adjoining buildings to the Knights of the Teutonic Order. The complex was called Mansio Theutonicorum, hence the corruption Magione which is still used to indicate the church. 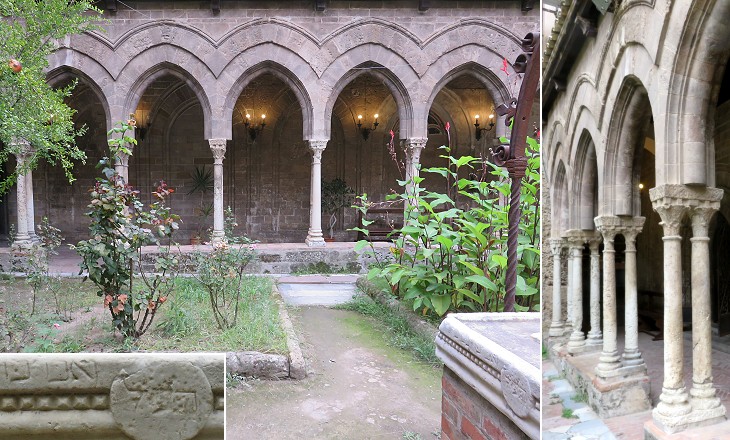 Chiesa della Magione: cloister; (inset) detail of the 1300 well which was built by using Jewish gravestones

The church underwent many changes which hid its original design. This was restored in 1875 and 1920 and eventually after the 1943 Allied bombings. In part the current medieval aspect of the building is based on assumptions which are not corroborated by historical evidence. The small cloister of the late XIIth century is characterized by a mismatch between the size of the capitals and that of the arches they support, similar to what occurs at the cloister of Monreale. 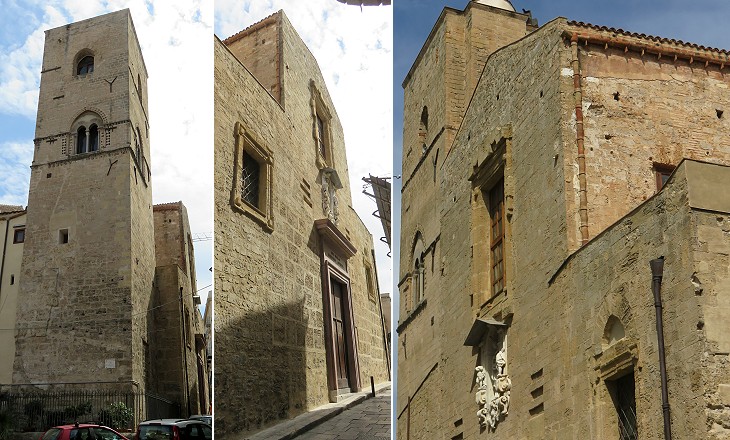 Both the church and the tower were built in ca 1300, but they were not united. The tower strengthened the defence of the southern part of Palermo and most likely it was very tall to provide a view over the harbour and the sea. It was eventually turned into a bell tower. The church was entirely redesigned in the XVIIIth century. Albergheria is one of the four historical quarters of Palermo and the church is not far from S. Maria del Carmine a Ballarò. 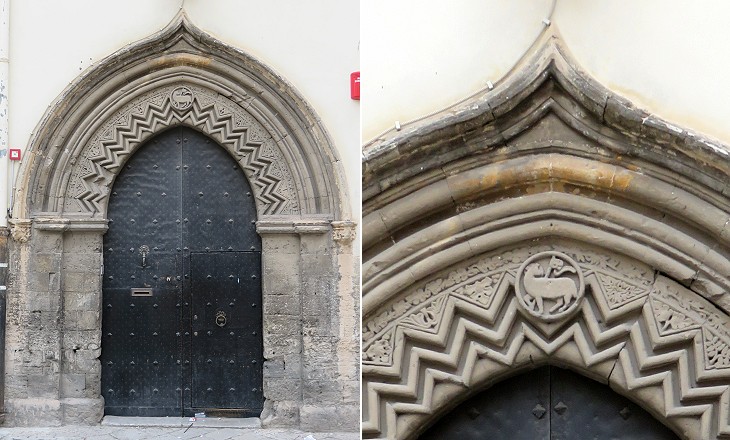 This portal is the only remaining element of a church which was destroyed in 1943. It shows the influence of Catalan architecture in Palermo. The Aragonese kings of Sicily were also Counts of Barcelona and many merchants from that town settled in Palermo. Thin mouldings are typical of churches of Barcelona (see a detail of St. Yves' Gate in the Cathedral of that city - it opens in another window). The zigzag or chevron decorative motif is instead typical of Norman architecture. 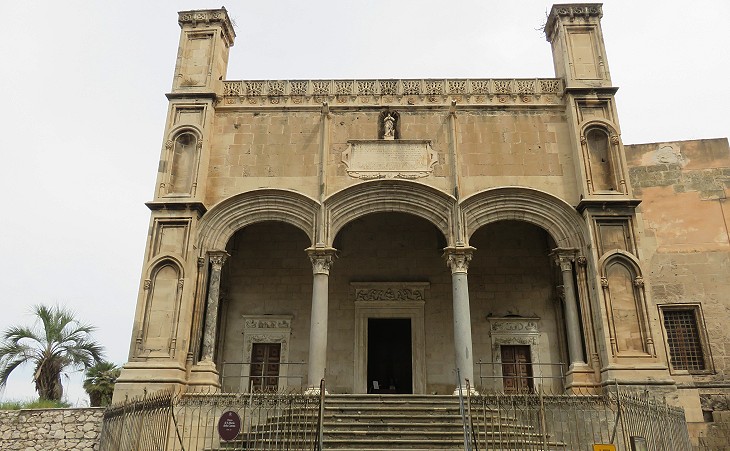 S. Maria della Catena (1490-1520), named after the nearby chain which closed the harbour

Another influence from Spain (see the portal of Iglesia de San Pablo at Valladolid - it opens in another window) can be noticed in the depressed arches of this church. They were designed by Matteo Carnelivari who made use of depressed arches also in the courtyard of Palazzo Abatellis. 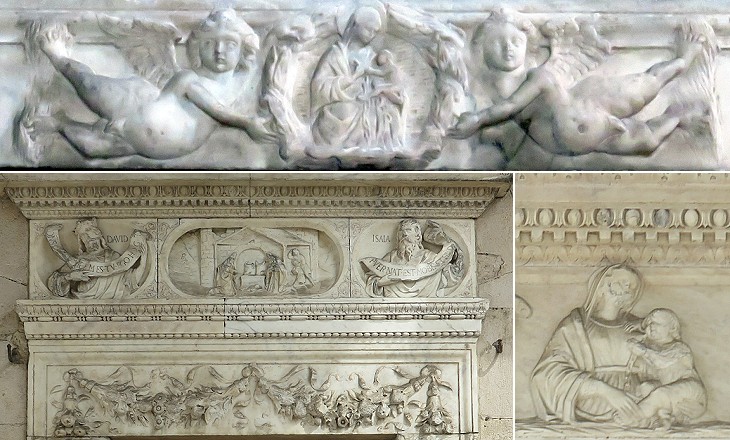 In the field of sculpture Sicily followed the developments which were taking place on the Italian mainland. Domenico Gagini from Bissone, today in Switzerland, but at the time in the Duchy of Milan, and Francesco Laurana from Dalmatia settled in Sicily in the second half of the XVth century and their works, in particular those of Gagini and of his son Antonello, had a lasting influence on local sculptors. 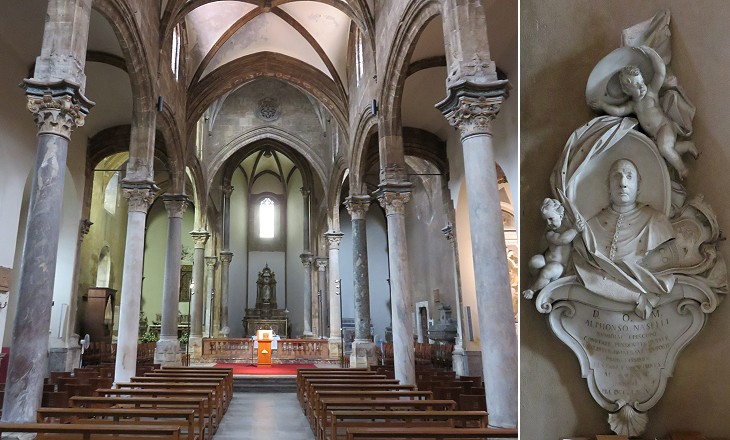 In 1601 the church was assigned to the Theatines who added many embellishments to its interior, similar to what they did in S. Giuseppe. These were removed in the late XIXth century to highlight the original architecture. The ceiling of the nave was rebuilt after it was bombed in 1943.
The interior houses some works of art from S. Nicolò alla Kalsa, a nearby church which collapsed because of an earthquake in 1823. The funerary monument to Alfonso Naselli follows patterns that were developed in Rome by Gian Lorenzo Bernini. It is interesting because in 1728 Naselli was appointed Bishop of Numida, by this meaning Sufasar in Numidia, an ancient Roman town in today's Algeria in the province of Mauretania Caesariensis (you may wish to see a beautiful floor mosaic from that region). He was the first bishop of Numida after 1200 years. He actually never set foot there. His appointment was just meant to promote him to a higher rank in the ecclesiastical hierarchy perhaps because the Naselli were twice princes, twice marquises and five times barons. Appointments to historical dioceses in Muslim countries were followed by the words in partibus infidelium (in the territories of the Infidels). 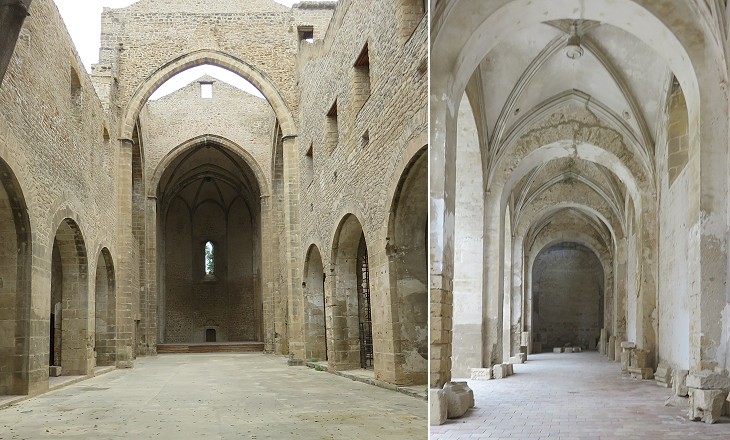 In the early XVIth century a large church and an adjoining monastery were built by the Olivetani, monks who followed the rule of St. Benedict. The site they chose however ended up by being surrounded by fortifications which were built a few years later to protect the town. In the 1570s the monks left the monastery and the complex was utilized for very different purposes, including a lazaret and a granary. The roof of the nave eventually collapsed.

The design of the church was still in Late Gothic style, but it was embellished with Italian Renaissance works of art which were moved to other churches. A painting was commissioned to Raphael. It depicted the spasms of pain experienced by the Virgin Mary when she saw Jesus carrying the Cross. In 1661 it was bought by the Spanish Viceroy for King Philip IV. It is now in the Prado Museum in Madrid (a detail which shows the Virgin Mary dressed like a nun opens in another window). 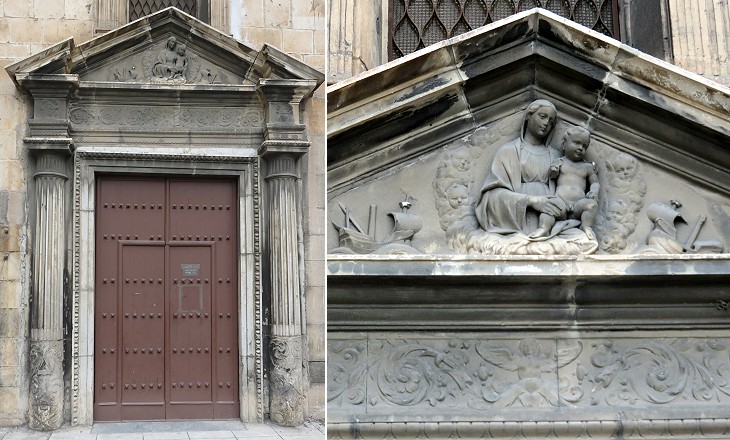 Antonello Gagini and his sons designed and decorated this church near S. Maria della Catena and the harbour. It was built to celebrate the safe return of the Sicilian fleet after a raid along the coast of Tunisia in 1524, during which a storm threatened to sink the ships. The church was reduced in size by the enlargement of Il Cassaro near Porta Felice. 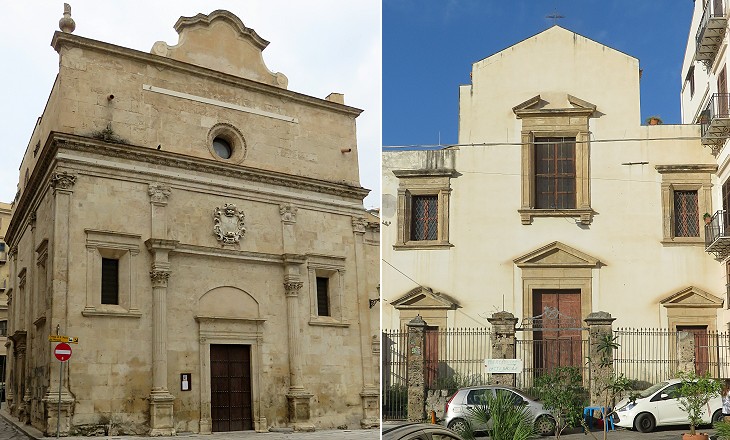 These two churches were built in the 1570s and their façades do not show influence from Spanish patterns any longer. S. Maria dei Miracoli initially belonged to a brotherhood and after a short time it was acquired by the Florentine merchants living in Palermo. Sts. Cosmas and Damian were patron saints of surgeons, physicians, pharmacists, dentists, barbers and other trades, so the procession during which their statues were carried through the streets of Palermo was a very popular one, until it was replaced by that of St. Rosalia. It was then moved to Sferracavallo, a fishermen's village north of the town. Relations between Sicily and the Maritime Republic of Genoa were very close since the Norman conquest of the island. They shared a common interest in fighting the Arab and later on Ottoman pirates. During the XVIth century these relations became stronger because in 1528 Andrea Doria, the de facto ruler of Genoa sided with Emperor Charles V (also King of Sicily) in the conflict between Spain and France. He was often asked to lead the Spanish fleet. The pro-Spanish policy of Andrea was followed by his successors. Cardinal Giannettino Doria was Archbishop of Palermo in 1608-1642. The merchants of Genoa in Palermo wanted to have a national church which showed their prestige. The building was completed in 1591. It was designed by Giorgio di Faccio from Piedmont and Battista Carabio from Genoa and it was situated near the harbour. 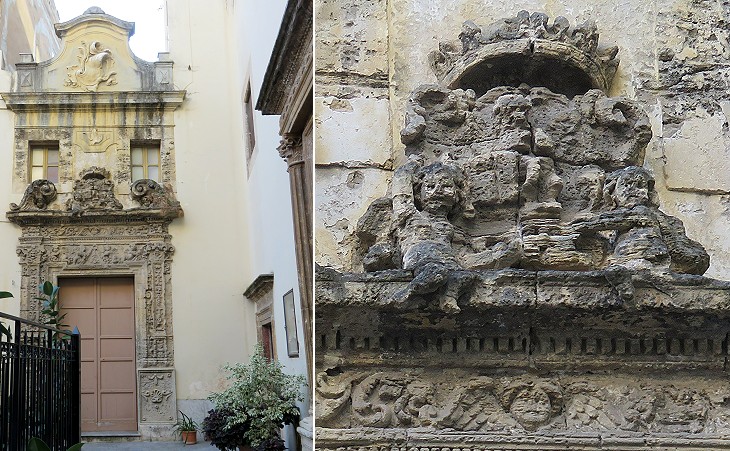 Palermo was not along the main maritime routes of the Republic of Venice, yet a number of Venetian merchants lived there. They had their church in a very popular neighbourhood which was far from the harbour. In the XVIIIth century an oratory was built to the side of the church. Its portal however is dated XVIIth century and it was originally situated in another place. It is greatly damaged, but one can still notice the Winged Lion, the symbol of the Republic, above the portal. 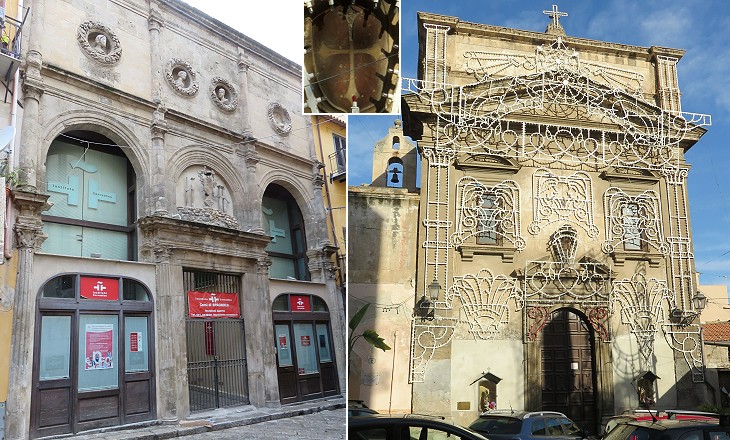 Other communities of foreign merchants built their national churches. Those from Barcelona dedicated it to Eulalia, one of the patron saints of Barcelona, a young martyr during the 303 persecution of Emperor Diocletian, whose body is buried inside the crypt of the Cathedral of that city (it opens in another window).
The church of Pisa was built in 1605-1608 by members of noble families who had left the town after its conquest by Florence in 1509. Ranieri, a hermit of the XIIth century, was proclaimed patron saint of Pisa in 1632. The dedication to him was most likely added to a previous one to the Forty Martyrs of Sebaste. 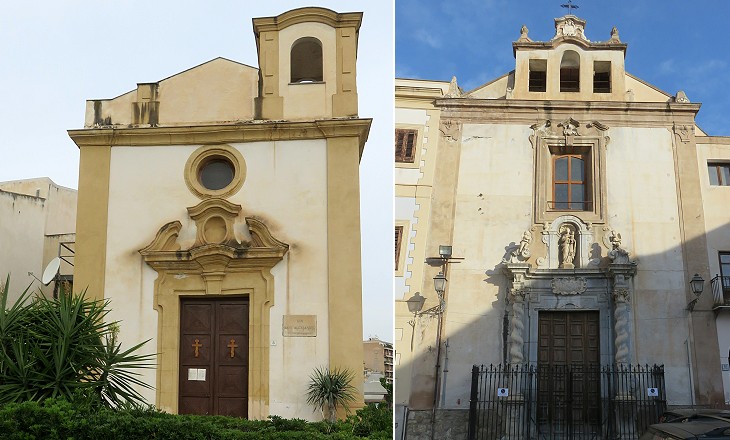 Similar to what occurred in Rome and other Italian towns the economy of Palermo was based on guilds, to which anyone who exercised an activity had to belong. The guilds were formed as brotherhoods and they built churches or chapels to hold ceremonies for their members there. S. Alessandro, near the harbour belonged to the guild of the charcoal makers. It was built in 1737. S. Maria di Gesù belonged to the guild of the owners of donkeys and horses which carried vegetables to Palermo's markets. It was built in 1660. The design of both churches was in line with the fashion of the time. 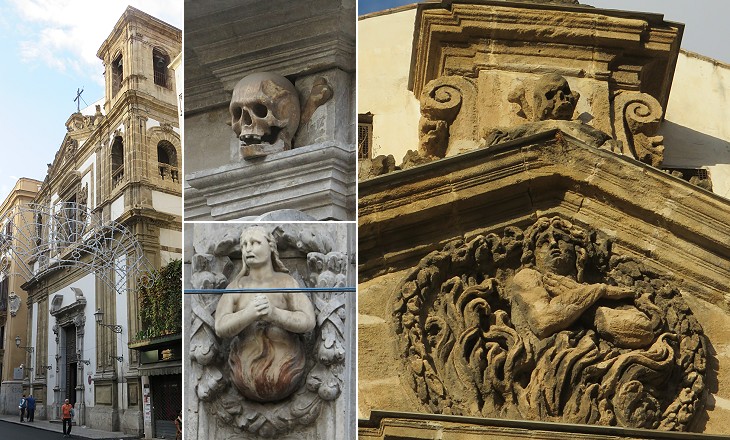 S. Orsola: façade in Via Maqueda and details of its decoration

In addition to those for the members of a guild or of a foreign community, there were also confraternities devoted to charitable activities. Some of them had oratories adjoining churches, but Compagnia della Orazione e della Morte built in 1662 a church along one of the main streets. Its aims were to pray (Orazione) for shortening the sufferings of the souls in Purgatory and to provide burial services to the very poor (Morte). These aims were also those of a similar confraternity in Rome. Their churches have references to Death, but that at Palermo, similar to churches in Cefalù and on Malta, has also references to the souls in Purgatory. They were portrayed as naked young women emerging from flames. 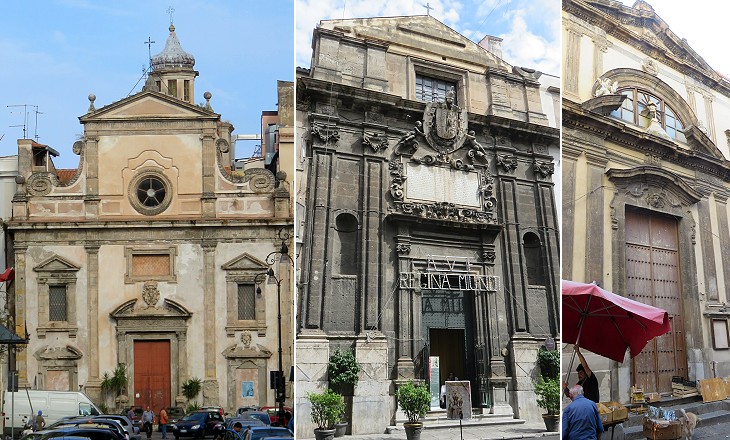 (left) S. Sebastiano (late XVIth century) (the image used as background for this page shows a detail of the relief of its portal); (centre) Chiesa dell'Assunta (1628); (right) S. Ippolito (1583)

In 1693 a major earthquake struck south-eastern Sicily and Catania and in 1783 it was the turn of Messina to be razed to the ground. Palermo has had earthquakes, but not of that magnitude, so it is possible to trace the developments of architecture in Sicily through its many churches, something which cannot be done in the other major towns of the island.