- The Asklepion
(detail of a statue of either Trajan or Hadrian)

You may wish to see pages on the Acropolis and the Lower Town first. 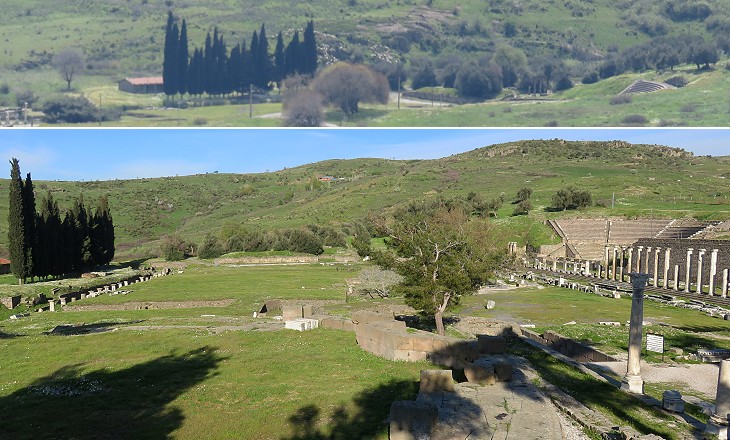 (above) The Asklepion seen from the Acropolis; (below) overall view of the central courtyard from the Temple to Asclepius

(At Pergamus) was once placed the celebrated temple of Esculapius, which, amongst other privileges, had that of an asylum. The concourse of invalids to this temple was almost without number or cessation. They passed the night there to invoke the Deity, who communicated remedies, either in dreams or by the mouths of his priests, who distributed drugs and performed chirurgical operations.
James Dallaway - Constantinople Ancient and Modern with Excursions to the Shores of the Islands of the Archipelago and to the Troas - 1797
The first travellers who visited Pergamum were well aware of the existence of the Asklepion, but they were unable to locate its remains. These were identified by German archaeologist Theodor Wiegand in the 1920s. 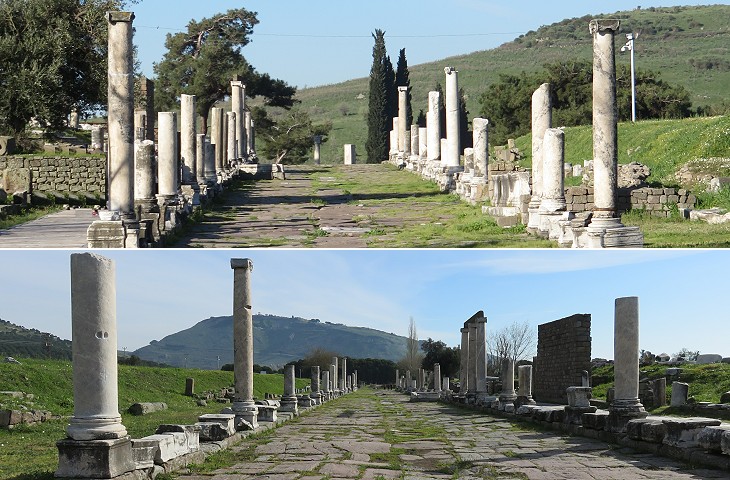 Views of Via Tecta, the sacred street leading to the Asklepion (the hill shown in the image below is the Acropolis of Pergamum)

Similar to the Asklepion of Kos that of Pergamum was situated at a distance from the town. Its facilities were reserved to the patients, although the site was most likely opened to all citizens during festivals and ceremonies. A sacred street linked the Acropolis with the Asklepion; its final section consisted of a long portico (Via Tecta means covered street). 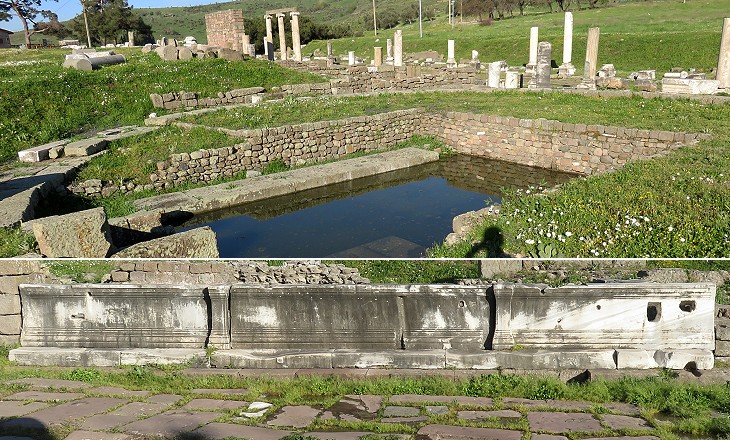 Along Via Tecta: (above) foundation of a large circular tomb having an internal rectangular chamber; (below) fountain

According to the Greek myths, Asclepius learnt the art of healing from both his father Apollo and the centaur Cheiron; he became so skilled in surgery and the use of drugs that he was revered as the founder of medicine. A major sanctuary was dedicated to him at Epidaurus, his birthplace, in the IVth century BC. The Asklepion of Pergamum was probably founded some years later. 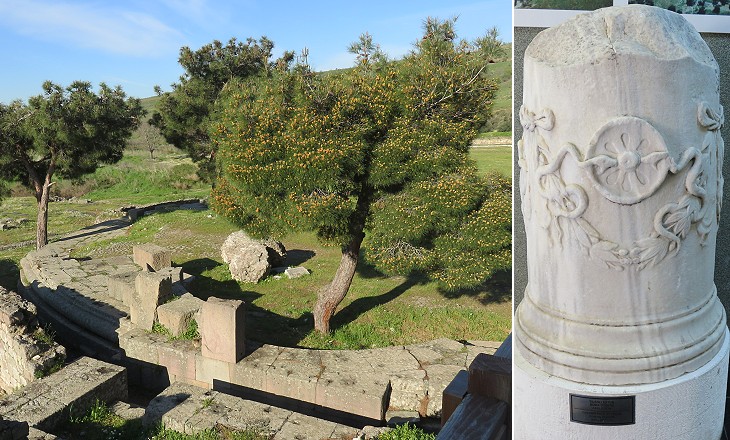 (left) Temple to Asclepius; (right) altar to the god in the Archaeological Museum

Asclepius had the power to raise from the dead and he himself was restored to life by Zeus: for this reason he was thought to have also a snake form and tame snakes were kept in his temples as these animals were regarded as a symbol of regeneration (snakes shed their skins every year). The Temple to Asclepius is almost entirely lost with the exception of an altar fragment decorated with snakes (see the god's snake at Isola Tiberina in Rome). Similar to many other monuments of the sanctuary it was rebuilt in the IInd century AD. 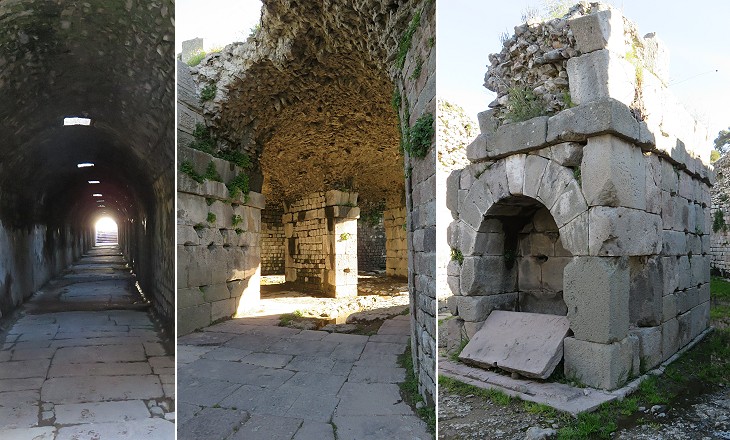 Temple to Telesphorus: (left) underground access; (centre) circular gallery inside the temple; (right) a pillar with a bath tub

Telesphorus was a son of Asclepius who had healing powers and more exactly he was the god of convalescence (theles = fulfilment; phorus = bearer). The design of his temple in the Asklepion is amazing; although the main building was almost at the same level as the central courtyard, an underground passage led to it so that patients went down a short flight of steps into a tunnel to enter a circular gallery. Its design allowed the patients to walk in a never ending procession. The pillars supporting the vault of the gallery had individual tubs for bathing. 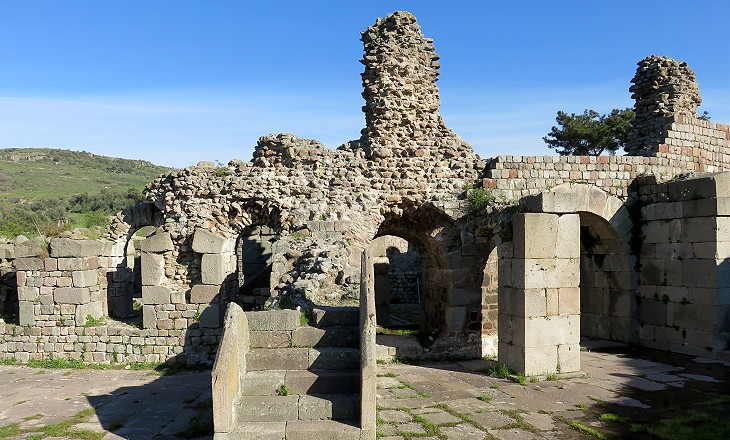 Cubicles for sleeping were located at the sides of the gallery: patients spent the night there to then tell their dreams to the priests/doctors to facilitate the diagnosis of their disease.
There is no doubt that this sophisticated therapy based on both psychological and physical treatments was often successful in restoring health. 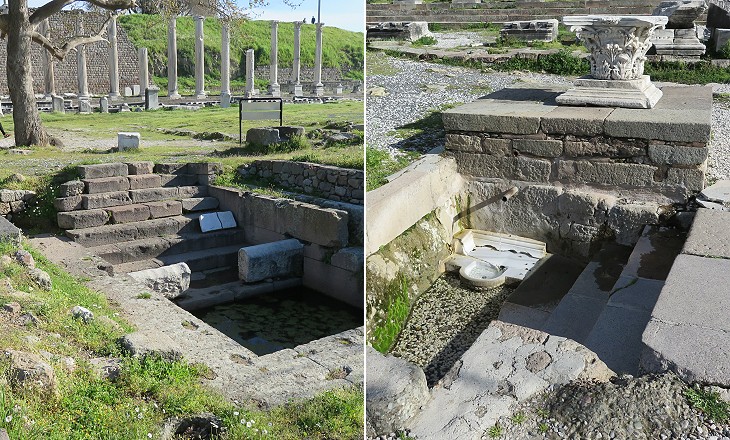 Sacred pools at the centre of the courtyard

The Asklepion acquired great fame in the second half of the IInd century AD thanks to Claudius Galenus (Galen), who is regarded as one of the founders of medicine. Galen started his career at the Asklepion as a therapeutes (a junior member of the staff); he then moved to Corinth and Alexandria to deepen his knowledge of medicine. He returned to Pergamum in 157 to work as a physician in a gladiator school, gaining experience of trauma and wound treatment. From 162 he lived in Rome where he became a court physician to Emperor Marcus Aurelius and his son Commodus. He then returned to the Asklepion. 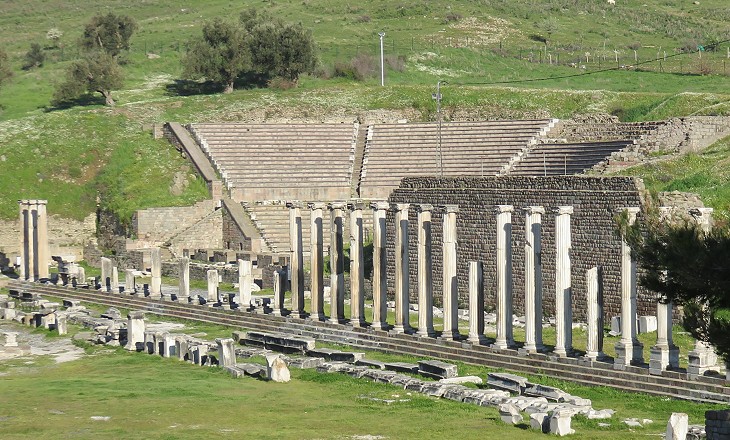 The Asklepion of Pergamum was something in between a sanctuary and a spa resort. It had facilities where the patients could relax and enjoy themselves such as a library and a small theatre: these were located outside a square portico, while fountains and pools were placed inside it, and are believed to have been built by Emperor Hadrian whose statue was found in the library. 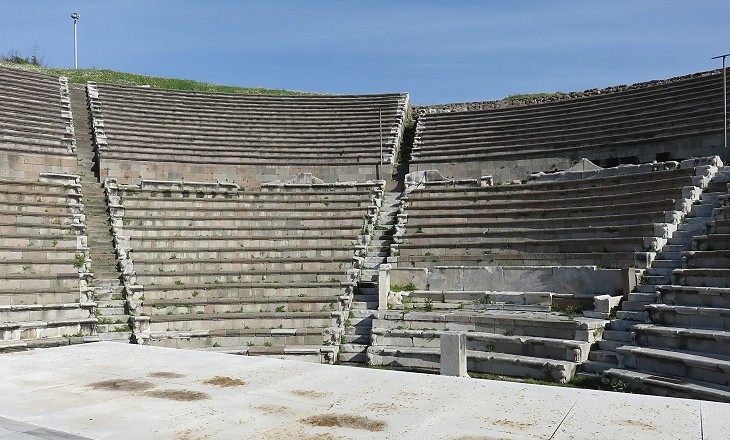 Suda, a sort of Byzantine encyclopaedia written in the XIth century states that Galen died at the age of seventy in ca 199, but some Arab sources indicate he lived until 216. In a series of medallions celebrating Caracalla the emperor is shown making a sacrifice in the Asklepion. He is known to have visited Pergamum in 214 and he might have sought the help of old Galen: his dreams were marred by remorse for having assassinated his brother.
The crime went not unpunished. Neither business, nor pleasure, nor flattery could defend Caracalla from the stings of a guilty conscience and he confessed in the anguish of a tortured mind that his disordered fancy often beheld the angry forms of his father and his brother rising into life to threaten and upbraid him.
Edward Gibbon - The History of the Decline and Fall of the Roman Empire - 1776 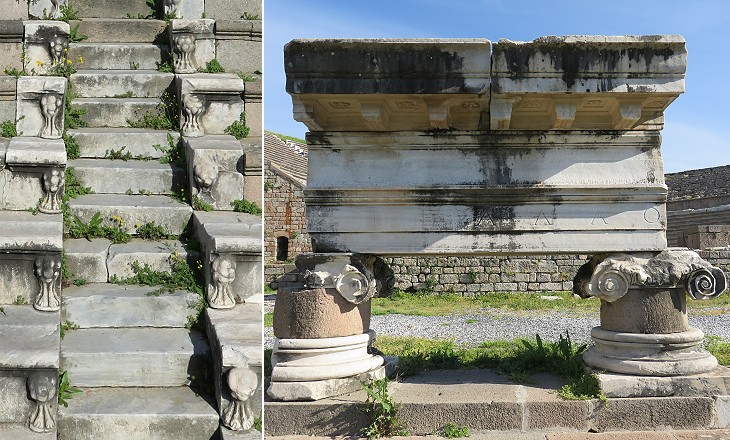 (left) Detail showing the lion paws which decorated many ancient theatres (e.g. Side); (right) fragments of columns, capitals and inscriptions of the Northern Portico

The northern side of the square courtyard which includes the theatre is the best preserved one and that which archaeologists have reconstructed to some extent. The Asklepion is situated in a small valley in the plain and it was not utilized for other purposes after its closure in the early Vth century. It became an open air quarry until the debris carried by floods covered it. 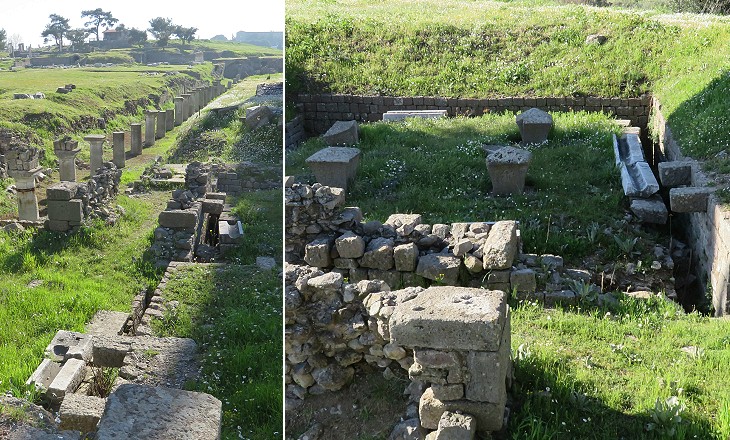 The Southern Portico was built over a vaulted structure to make up for a slope of the ground, perhaps similar to that found at the agora of Smyrna. The stones of this structure were taken away as building material and now a sort of trench indicates its location. The trench houses some broken columns of the portico. At the south-western corner of the courtyard a square hall with an adjoining latrine has been unearthed and in part reconstructed. 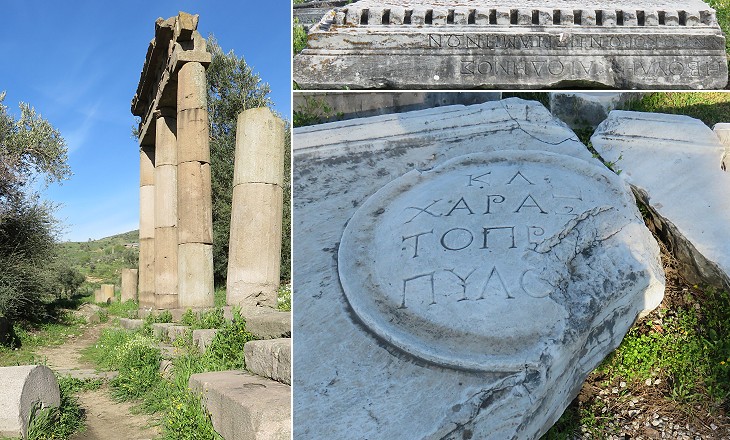 The IInd century AD porticoes had columns of the Ionic order. Archaeologists have identified a IInd century BC portico with Doric columns which begins at the Western Portico and most likely led to a (lost) centre for pilgrims. As a matter of fact the residences for the patients and the staff are still to be identified. With rare exceptions all the inscriptions are in Greek. 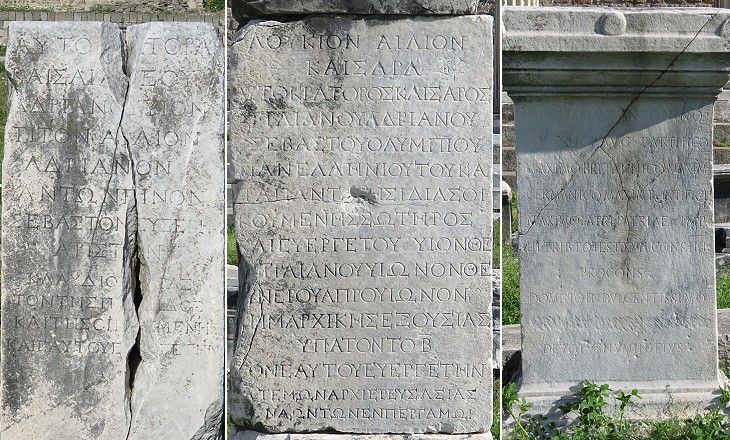 The image used as background for this page shows an acroterium (a decoration on the cornice of a building) from the Asklepion at the Archaeological Museum.

Move to:
The Acropolis
The Lower Town
The Archaeological Museum