"The attraction .... brought me near the Piazza Montanara, by a stall, where, under awnings erected at a street corner, amateurs and clerics disputed a few smoked and trashy pictures, antiquities of modern date, and old books ill used by time". This sentence from Francis Wey's Rome was written in 1872 and is accompanied by a sketch by Henri Regnault: one may think the sketch was painted to illustrate the words of the writer: it is the reverse as the sketch was drawn before and Francis Wey wrote a short account meant to justify the inclusion of the sketch in his book. 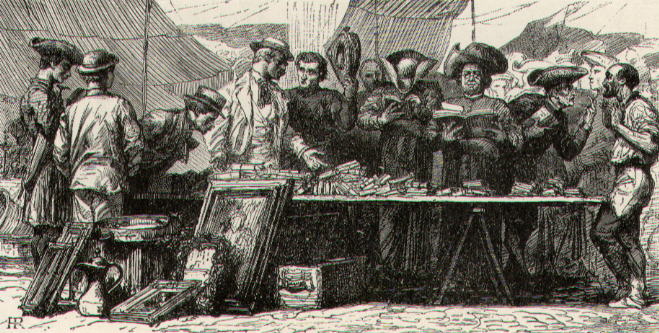 Henri Regnault (1843-1871), a young French painter, was for several years a boarding student of the French Academy at Villa Medici: while his few large paintings portray Judith, Salome and other similar subjects, he has left several vivid sketches, bordering on caricature, of everyday life in Rome in the last years of the Papal State. He is remembered as a war hero, as he enlisted in the Army, without having to and was killed in January 1871, just days before the end of the war between France and Prussia.
Browsers through the flea market of Piazza Montanara had a lot of fun even though they were not interested in buying anything. Piazza Montanara does not exist any longer, but "its smoked and trashy pictures, antiquities of modern date, and old books ill used by time" can still be found outside Porta Portese.

(left) The area of the flea market; (right) a coat of arms of Pope Urban VIII on the walls near Porta Portese

Via Portuense, the large road with very little traffic and few buildings outside Porta Portese (in orange in the map) became a Sunday open air market immediately after World War II. The area was easily reachable by everybody using the Circle Line tramway; the effects of the war had increased the need for exchanging second hand items. In recent years the market has seen a remarkable change with the area along Via Portuense almost entirely occupied by sellers of very low priced new items while the buyers mainly belong to the growing communities of foreign workers.
Second hand items can still be found in the streets marked in light blue in the map: the starting point can be reached from Porta Portese by walking along the walls built by Pope Urban VIII (red line). 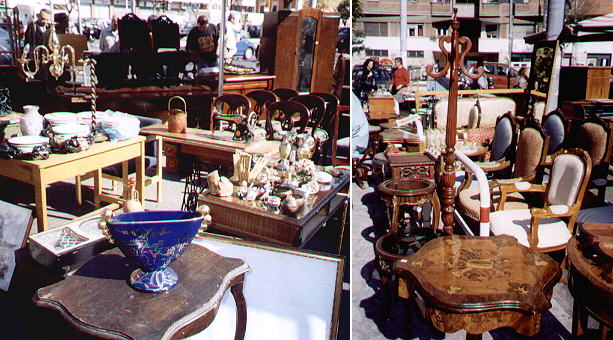 The basic requirements to enjoy a Sunday morning walk through the flea market are: a sunny day, a well hidden wallet (Mani di velluto - velvet hands -, the most experienced pickpockets often choose to visit Porta Portese at peak hours), and a strong determination not to give in to those who suggest you bet on which of three small bells is covering a ball.

Antiquarian bookshops usually do not have a very welcoming atmosphere and often one feels he needs to be an expert to dare disturbing the owner. At Porta Portese this barrier goes away and it is much easier to browse through old prints and edicts without being asked what exactly we are looking for: prices however are still very much in line with those of the uptown bookshops.

With some patience it is possible to find that book you liked so much when you were a child and which went missing during a relocation. As far as old books are concerned there is a large assortment of religious books usually written in Latin; they are priced on the basis of the engravings included in the text. The book shown in the picture is a 1590 collection of sentences by the Sacra Rota, one of the tribunals of the Papal State and still the name of the existing tribunal dealing with annulment of marriages. 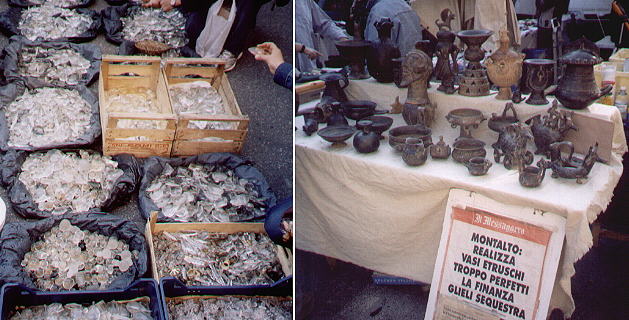 Porta Portese is the place where you can find the replacements for a glass dish which has broken or the missing glass drop for an old lamp-holder. As Francis Wey noted, in Rome you can find antiquities of modern date: the manufacturer of copies of Etruscan vases advertises his wares by showing the headlines of a newspaper telling that they were confiscated because of their excessive similarity to the ancient ones. 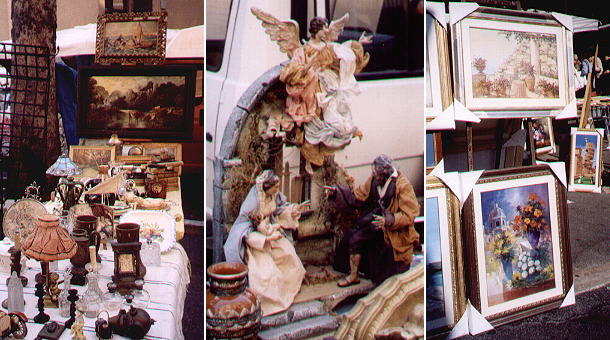 All the things you do not need, but are tempted to buy (you may wish to see a page showing some cribs)

In the 1980s a certain number of other flea markets developed in other areas of Rome and today every Sunday there are at least a dozen fairs of a more limited size than Porta Portese, but restricted to antiques and second hand items: at some of them there is a small entrance fee to be paid. They lack however that interesting crowd which breathes life into Porta Portese.

Other Days of Peace pages:
A Sunny Day in Villa Borghese
At the Beach
Voicing Your Views and feeling better!
Eating Outdoors
A visit to Roseto di Roma
Christmas in Rome
Celebrating the Foundation of Rome
The procession of La Madonna de Noantri
Running the Marathon
Watching the Parade
Finding Solace at the Protestant Cemetery
Attending 2007 July Events
Rome's Sleepless Night
Attending Winter Ceremonies
Jogging at Valle delle Camene
Sailing on the River to see the Bridges of Roma
An October Outing to Marino
Attending a Funeral ...and enjoying it!
A Special Spring Weekend
Embassy-hunting in Parioli
Celebrating Eritrean Michaelmas in Rome
Visiting Rome at Dawn
Visiting Rome in the Moonlight
Visiting Rome on a Hop-on-Hop-off Bus
Visiting Multi-ethnic Rome
Baroque Fireworks
Playing in the Snow at the Janiculum
Watching the Pride Parade
Visiting the Movie Sets at Cinecittà
Reading Memoirs of Hadrian at Villa Adriana
Looking up at the Ceilings of the Vatican Palaces
Reading Seneca at the Baths
Spending the Last Roman Day at St. John Lateran's Cloister
Reading Ovid at St. Peter's
Walking the Dog at Valle della Caffarella
Keeping up with new discoveries at Museo Ninfeo