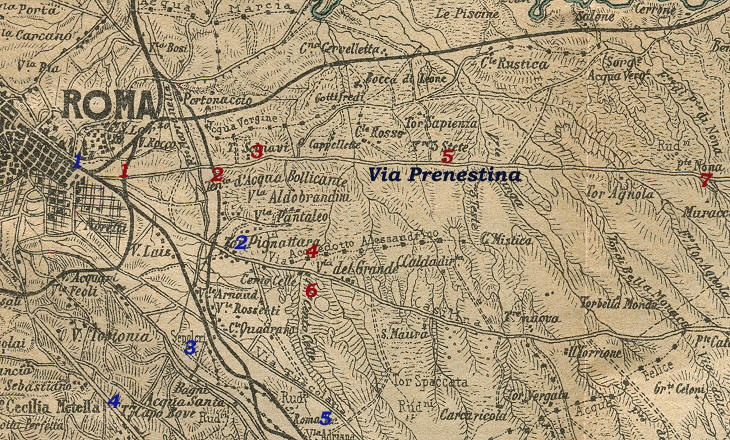 This walk starts from Porta Maggiore and it follows Via Prenestina, the ancient Roman road leading to Praeneste (Palestrina). Soon after the fall of the Roman Empire the road was abandoned and it was reopened only in the second half of the XIXth century. Today the initial stretch of Via Prenestina is a highly populated area and some of the ancient monuments shown in this page are surrounded by tall blocks of flats. 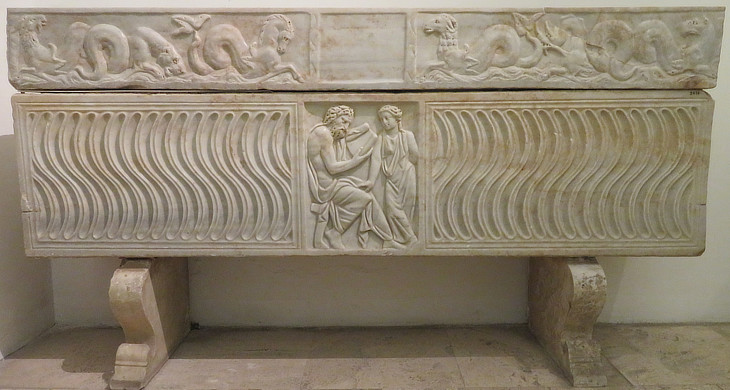 Musei Capitolini: sarcophagus found along Via Prenestina (IIIrd century AD); the central scene most likely depicts a philosopher/poet and a muse 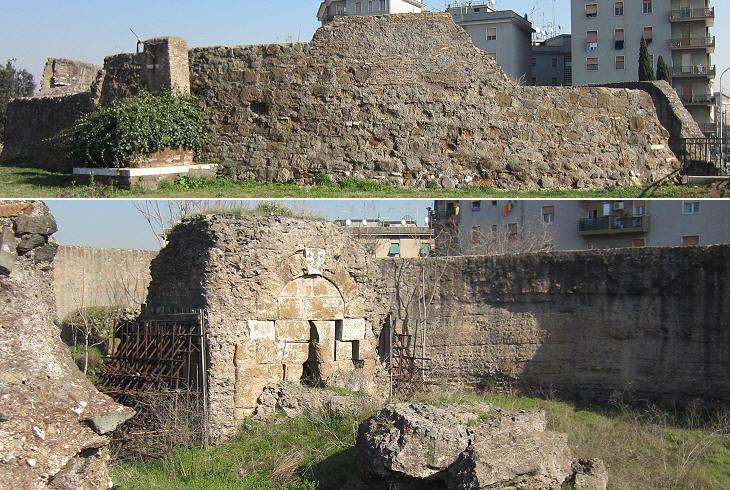 Il Torrione: (above) circular wall which surrounded a mound; (below) the burial chamber

Via Prenestina was less important than other Roman roads such as Via Appia or Via Flaminia, nevertheless some wealthy Romans chose it as the location to erect their tombs; most likely they were the owners of some villas in the area or they came from Praeneste.
A very large mausoleum stood at the second mile of Via Prenestina; the remaining circular wall surrounded a mound hiding the burial chamber; the mausoleum was damaged during WWII when this quarter of Rome was bombed, due to its proximity to the city's railway warehouses. Because of its vague resemblance to a tower it was called il Torrione; after the war the earth was removed and the burial chamber was unearthed.
The mausoleum is thought to have been built in the Ist century AD because of its similarity to the tombs of Cecilia Metella and Lucilio Peto, who lived at the time of Emperor Augustus. 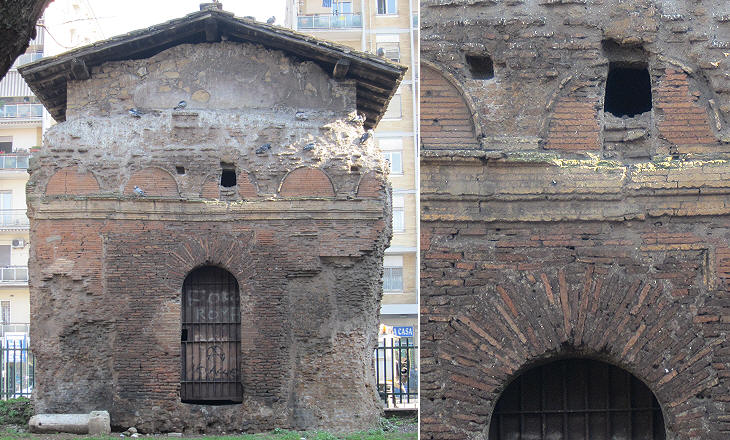 Roman Tomb and detail of its brickwork

Largo (square) Preneste is the centre of a very busy and congested borough of Rome. A small Roman tomb made of brickwork and having the shape of a small temple is the totally out of context embellishment of Largo Preneste. The building was used for centuries as a house or a granary and small windows were opened in the thick Roman walls.

The lid depicts the Four Seasons by portraying Eroses cutting flowers (Spring), picking apples (Winter), grape harvesting (Autumn) and wheat harvesting (Summer). The relief is very finely executed and very lively. The box portrays a drunken Dionysus/Bacchus in a rather theatrical way in the central scene. Dancing satyrs and maenads complete the decoration and to the right Eros discovers Ariadne on the island of Naxos with whom the god will fall in love. 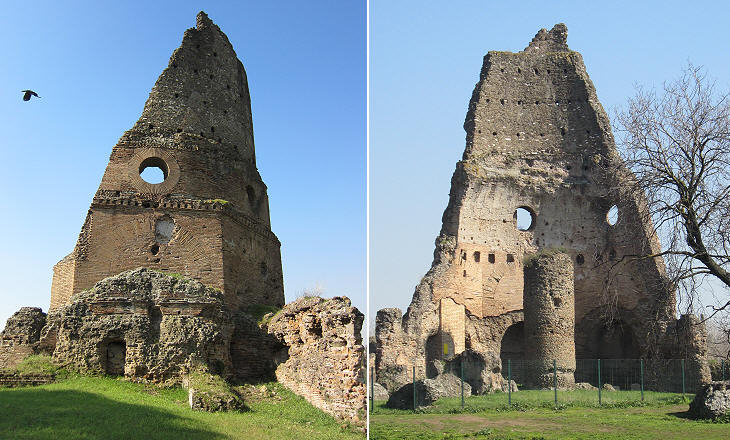 At the third mile of Via Prenestina a public garden provides a wide array of ancient buildings with a more appropriate setting than Largo Preneste. The area is known as Tor de' Schiavi (slaves), but it has nothing to do with slavery; the name comes from Vincenzo Rossi dello Schiavo who acquired the buildings and the nearby land in 1571. A tower was built in the Middle Ages on top of an octagonal hall covered by a dome which most likely was part of ancient baths. The cylindrical wall at its centre supported the steps leading to the top of the medieval tower. You may wish to see Tor de' Schiavi during the 1844 celebrations held by the German artists on their route to Tor Cervara. 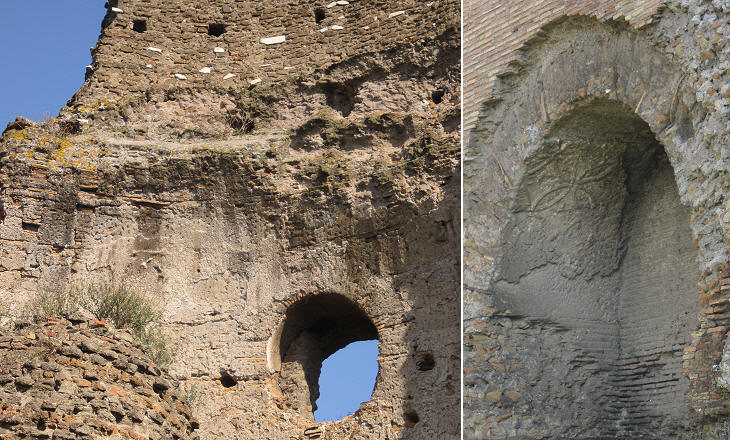 Octagonal hall: (left) detail of the wall supporting the collapsed dome (the holes were filled with pottery); (right) traces of stucco decoration

The hall is thought to have been built at the beginning of the IVth century AD; this because of a construction detail (i.e. the use of pottery to lighten the weight of the dome) which can be observed at the Circus built by Emperor Maxentius along Via Appia and at the Mausoleum of St. Helena (Tor Pignattara) which were built during that period. 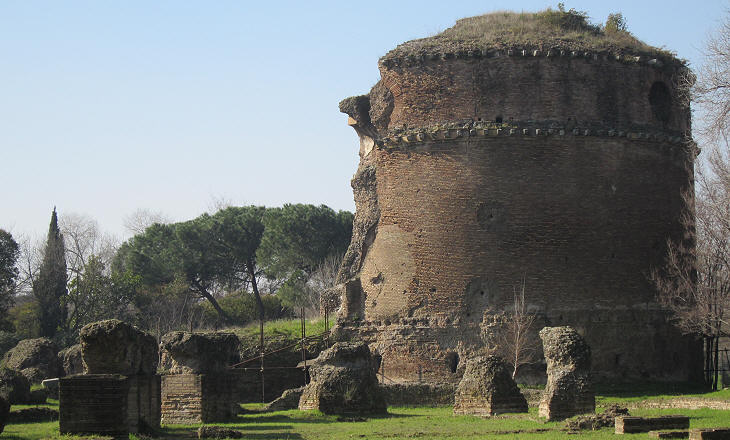 Mausoleum and ruins of a basilica

The garden is named Villa Gordiani after the Roman Emperors Gordian I, Gordian II and Gordian III; they were emperors in 238-244 AD, during a period of turmoil known as the Military Anarchy; their family had a large estate in the area. The remaining main building however was erected later on, at the beginning of the IVth century AD. We still do not know to whom the large circular tomb was dedicated. 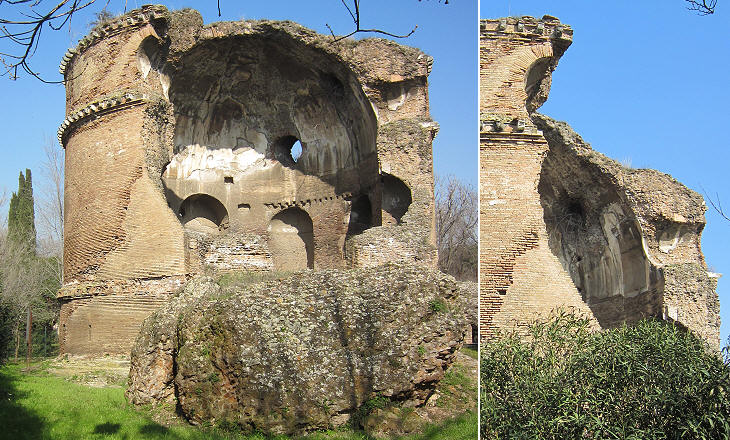 Mausoleum: details of the walls

The partial collapse of the dome shows that it was very thin at the top to reduce pressure on the supporting walls; this can be observed also at the Pantheon, the largest ancient dome. The building was for a certain period used as a church and the dome ceiling has some faint traces of frescoes. The existence of a large bath establishment is proved by several cisterns with a large storage capacity. A puzzling aspect is that, based on their construction technique, they are dated to a much earlier period than the octagonal hall. 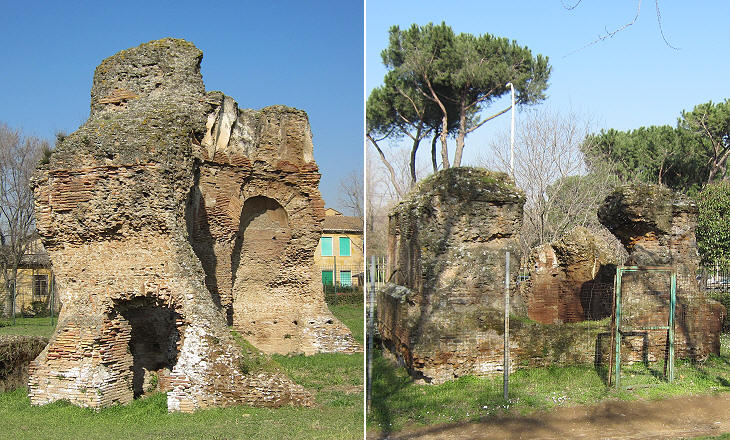 (left) Hall with an apse (IInd century AD); (right) tomb on the other side of Via Prenestina

Ruins of other ancient buildings can be found in this garden and in another one which is located on the opposite side of Via Prenestina; however the lack of inscriptions and historical sources do not have allowed a precise identification of the purpose of the buildings and of their owners. 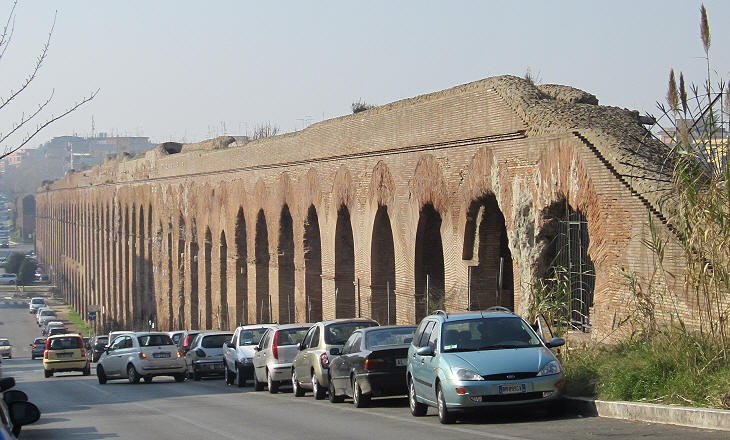 Aqueducts testify to the advanced construction techniques developed by Roman engineers; the movement of water was based on gravity and this meant that an appropriate gradient was required along the whole length of the aqueduct, the route of which was carefully planned in order to exploit as much as possible the shape of the ground; in the case of the aqueduct built by Emperor Alexander Severus in 226 AD to supply water to baths near today's Palazzo Madama, engineers found a route which kept the water conduit very near the natural level of the ground; this was not possible however at a depression near Via Prenestina and an imposing series of arches was built to bridge the gap. 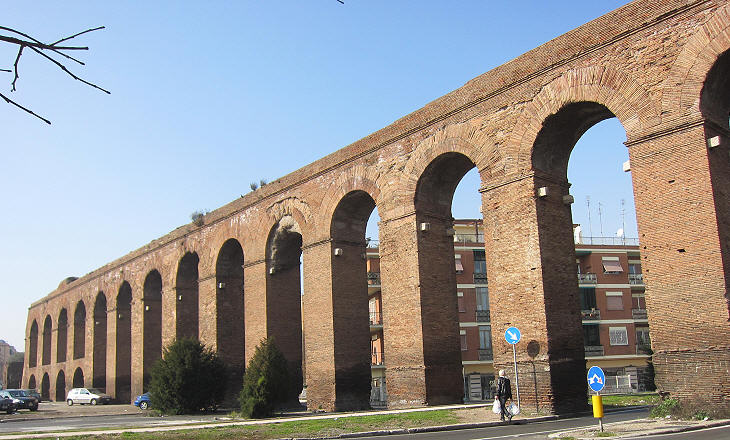 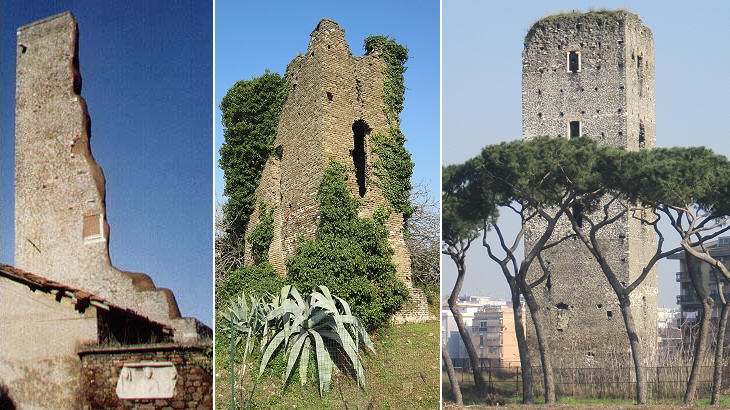 The landscape of the Roman Campagna was characterized by ancient aqueducts and by medieval towers until the beginning of the XXth century.
Tor Tre Teste (three heads) was named after the funerary relief portraying three heads which was walled at its base (now replaced by a copy).
Torre di Centocelle, a very tall tower, was built in the XIIth century to protect a property of the chapter of S. Giovanni in Laterano and it was therefore known as Torre di S. Giovanni. 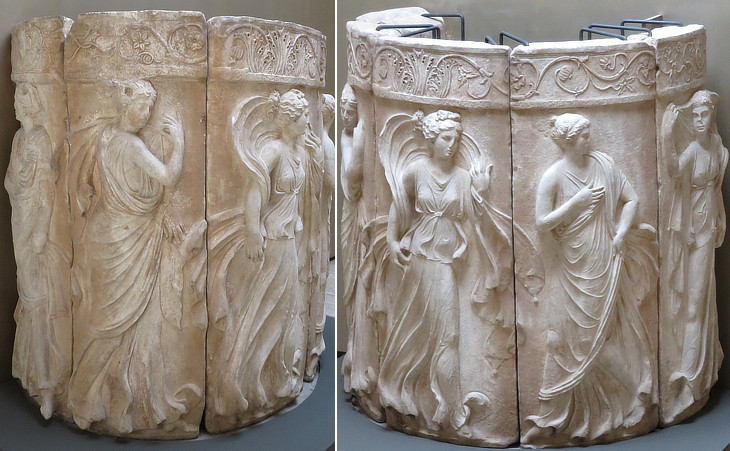 Museo Nazionale Romano: funerary monument which was found in 1908 near Tor Tre Teste (Ist century BC)

The dancing women are thought to be maenads, i.e. followers of Dionysus, because scenes of Dionysiac processions (thiasos) were very often depicted in sarcophagi. The dancers are not portrayed in isolation in each section of the monument, yet they do not seem to dance in a coordinated manner, which also supports the opinion that they are followers of Dionysus because the god inspired them into a state of ecstatic frenzy. You may wish to see a relief from Sagalassos showing maidens dancing together, each holding the garment of their neighbour. 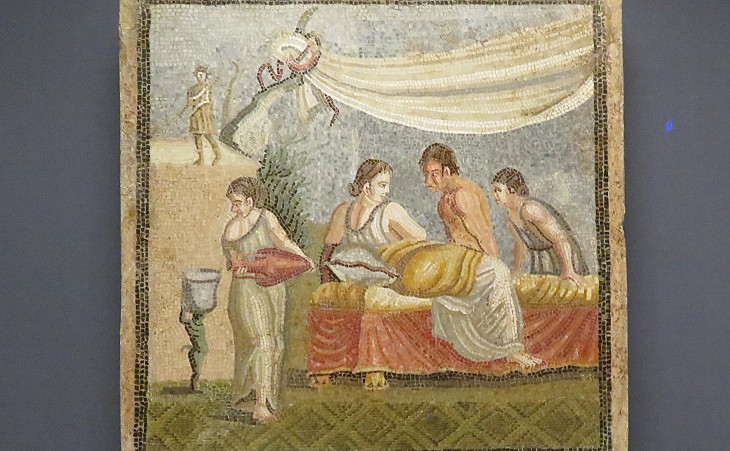 Kunsthistorisches Museum of Vienna: floor mosaic from a Roman villa in the area of Centocelle 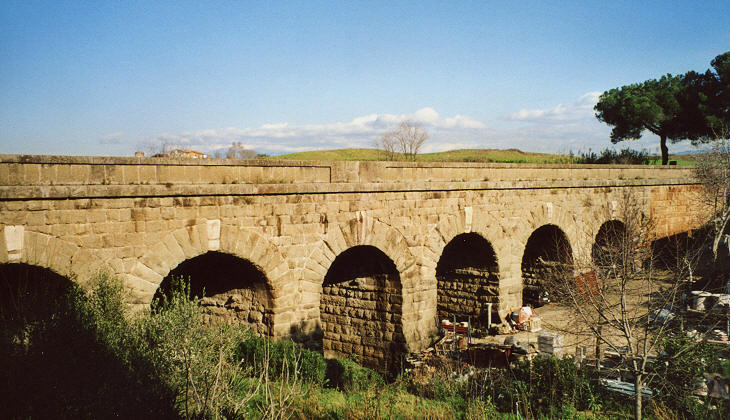 At the ninth mile the road passes over the magnificent viaduct called Pontenona consisting of seven arches, built of the gloomy stone called "lapis gabinus". The pavement of the bridge, and even part of the parapet, exist, showing what it was when entire.
A. J. C. Hare - Days Near Rome - 1875
At the IXth mile Via Prenestina steps across a brook by a 125 meter bridge built in the Ist century BC. Ancient Romans had a penchant for designing straight line roads and to achieve this result they were often uncompromising. Nevertheless when one sees the small stream below the bridge (even assuming it had been broader 2000 years ago), the decision to build such a large bridge can only be justified by the policy of public works which the Senate and the emperors put in practice to keep the Roman plebs busy. A similar policy was followed by the popes: Pope Clement XI used to justify the expense for new churches, fountains, etc by saying: E' tutta beneficenza! (it's all charity!). 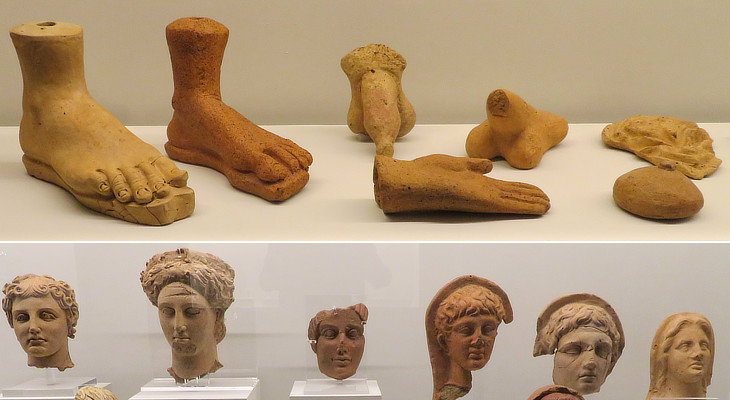 Museo Nazionale Romano: terracotta decorations of a temple (left) and of a town building (right) at Gabii (VIth century BC)

More and more desolate becomes the country, till at the Osteria dell'Osa, 11 miles from Rome, the road to Gabii, now exceedingly rough for carriages, leaves the Via Praenestina to the right, and (..) reaches the few huts which mark the site of the town, and a low massive ruin, which might easily pass overlooked, but which is no less than a fragment - the cella - of the famous Temple of Juno, celebrated by Virgil. (..) Slight remains of wall exist near a medieval tower, and small fragments of ruins with scattered pieces of marble may be found all along the ridge. Near the temple remains of semi-circular seats, perhaps indicating a Theatre have been discovered, and nearer the high-road it has become possible to trace the plan of the Forum a work of imperial times, surrounded on three sides by porticoes, and adorned with statues. These fragments, ill-defined and scattered at long intervals in the corn or rank weeds with which the Campagna is overgrown, are all that remains of Gabii. Hare 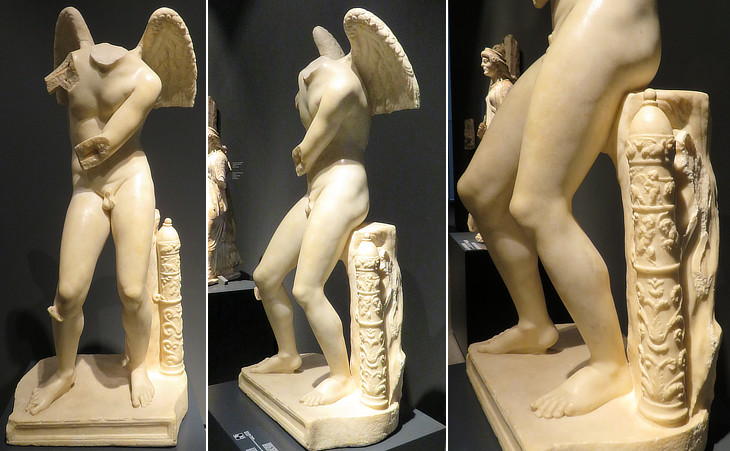 Dionysius of Halicarnassus determines the position of this ancient city in these terms: "Gabii, a city of the Latins and an Alban colony, was 100 stadia from Rome, on the via Praenestina" (..) and the identity of the ruins is further placed beyond all doubt by the multifarious monuments found here in 1792 by Prince Marcantonio Borghese. (..) Having frequently changed masters in the middle ages, its lands have finally become the property of Prince Borghese.
Rev. Jeremiah Donovan - Rome Ancient and Modern - 1843
Under Tiberius the town had a slight revival, which was increased under Hadrian, who adorned it with handsome public buildings, colleges, and an aqueduct. Hare
Excavations at Gabii have unearthed works of art of both its very ancient past and of its revival in the Ist/IInd centuries AD.