This is a directory of links to the pages where Baroque sculptures are shown. The list is split in three sections in line with Rudolf Wittkower's Art and Architecture in Italy 1600-1750. You can see a similar directory covering Baroque Architecture. 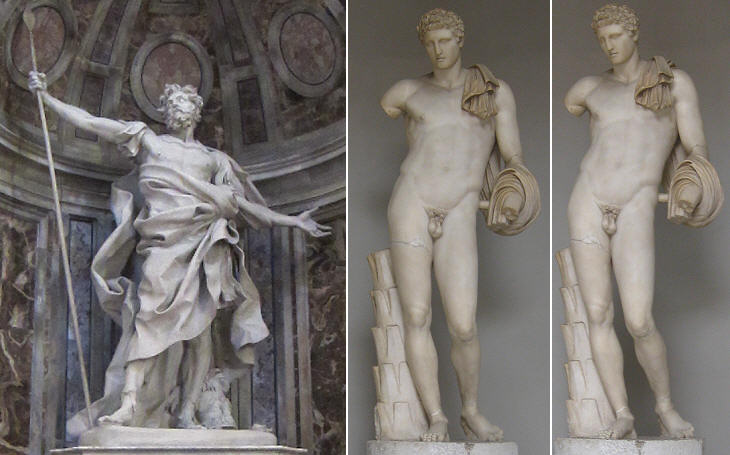 The admired statue of Antinous is in the same Court. Nothing can be more light, elegant, and easy; the proportions are exact, and the execution perfect. It is an exquisite representation of the most beautiful youth that ever lived.
John Moore - A View of Society and Manners in Italy - 1781
The distinctive features of baroque statues are a) the use of more than one block of marble, thus allowing a large array of gestures; b) the treatment of cloaks, which do not fall in an ordinary way, but are moved by a sort of wind; c) the use of variegated/coloured marble or of different marbles; d) a torsion of a very often tall and slim body.

The first column shows the name of the sculptor and his dates of birth and death. The second column has the link to the page where the statue is shown. Sculptors are sorted by year of birth.

The image used as background for this page shows a detail of the Monument to Cardinal Antonio Barberini by Bernardino Cametti at Palestrina.