The nomadic tribes of the deserts and steppes of Central Asia were for centuries at the border of the civilized world; they were mainly under the cultural influence of Persia; when this country was conquered by the Arabs, also Central Asia was Islamized. However the imposition of Arabic was limited to the alphabet, because the local (Turkic) languages were not displaced.
In the Xth century there was a migration of Turkish-speaking people into Persia; they were slaves and soldiers and they gradually rose in society maintaining their tribal bonds. They were named after Seljuk, the leader of one of these tribes. Togrul, a grandson of Seljuk, profiting from the crisis of the Caliphate of Baghdad, which formally had suzerainty over the Muslim world, established his rule over most of Persia. His successor Alp Arslan expanded Seljuk possessions to Georgia and Armenia, thus coming into contact with the Byzantine Empire. 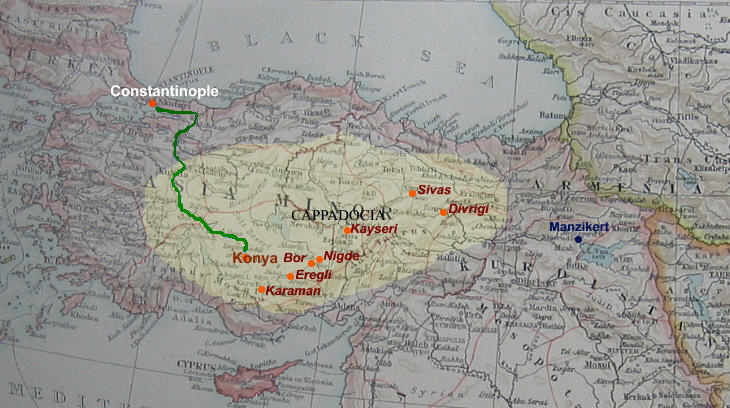 Clickable map of the towns covered in this section. The lighter area shows the approximate borders of the Sultanate of Rum. The green line indicates the 1896 railway linking the Asian side of Constantinople with Konya - the first leg of the Constantinople - Baghdad Railway (1900 Times Atlas of the World)

In 1071 at Manzikert Alp Arslan defeated the Byzantine army which was led by Emperor Romanos IV who was captured. Alp Arslan agreed to release his prisoner in exchange for a ransom. But worse was yet to come for the Emperor, as on his way back to Constantinople he was attacked by a Byzantine rival faction. He surrendered and resigned his rights to the throne. After having been brutally blinded by his enemies he was paraded through the streets of Constantinople on a donkey. He died a few days later.
In the following years the Byzantines failed to recover from Manzikert. Their internal rivalries were such that the factions resorted to the Seljuks for help: in 1078 a rebellious general became emperor with the decisive support of a Seljuk army which occupied almost all of the Byzantine possessions in Asia.
In 1097 Emperor Alexios I Komnenos with the help of the Crusaders managed to reconquer Nicaea and parts of western Asia Minor, but the Seljuks maintained a firm control on its central and eastern sections.

Mount Hasan (Turkish: Hasan Dagi) is an inactive volcano near Nigde. With an altitude of 10,672 ft., it ranks as the second highest mountain of central Anatolia

A man cannot travel in Asia, as they do in Europe; nor at the same Hours, nor with the same ease. There are no weekly Coaches or Wagons from Town to Town; besides, that the Soil of the Countries is of several natures. In Asia you shall meet with several Regions untill'd and unpeopl'd, either through the badness of the Climate and Soil, or the sloth of the Inhabitants, who rather choose to live miserably, than to work. There are vast Deserts to cross, and very dangerous, both for want of Water, and the Robberies that the Arabs daily commit therein.
Jean-Baptiste Tavernier - Travels through Turkey to Persia (in the 1630s-1650s)
Friday, September 2 (1835) I found myself upon an elevated plateau of granitic rocks, against which the red sandstone appeared to have been deposited as in a basin. Crossing this plain, the two remarkable rugged and pointed hills of Hussein Dagh, formed a conspicuous feature and evidently, from their conical appearance, of volcanic origin. (..) The bold outline of Hussein Dagh varied the uniformity of the scenery.
William Hamilton - Researches in Asia Minor, Pontus and Armenia - 1842
At Ladhiqiya in Syria we embarked on a large galley belonging to the Genoese, and set out for the country of the Turks known as Bild ar-Rum, because it was in ancient times their land. Later on it was conquered by the Muslims, but there are still large numbers of Christians there under the government of the Turkmen Muslims.
H. A. R. Gibb - Selection from the Travels of Ibn Battuta in 1325-1354
The Seljuk Empire was organized according to a feudal system; local rulers accepted the often nominal suzerainty of the emperor (sultan). In 1092 a dynastic quarrel led to a split of the empire: Kilij Arslan, one of the pretenders proclaimed the independence of the Sultanate of Rum which included central and eastern Anatolia. It was called Rum (i.e. Rome) because its territory had been part of the Roman Empire and more in general Rum meant Western/European; in Europe it was called Sultanate of Iconium, after the Latin name of Konya, its capital.
The Sultanate prospered; the Crusades threatened it, but at the same time they contributed to its wealth because they were a positive factor for trade between Europe and Asia. Venice and in particular Genoa established trading bases in the Aegean and Black Seas. Seljuk rulers built a net of caravanserais (or hans) across the Anatolian tableland which facilitated the flow of goods between these bases and Persia and Syria. The main route was called Uzun Yol, (Long Road) and it was an almost straight line which linked Konya with Kayseri (ancient Cesarea) and Sivas (ancient Sebaste) the two other main towns of the sultanate.

Tuzla Golu, a large salt lake near Kayseri (you may wish to see Acigol another salt lake in Anatolia or a "chott" in Algeria

Wednesday, July 12. (1836) These salt-marshes extend very far to the S. and S.E., the river losing itself in them before reaching the salt lake or Touz Ghieul. The plain was now perfectly barren, except a few specimens of Salicomia near the marshes, and the Capparis spinosa on the drier ground. Here we were again frequently deceived by the mirage, fancying the lake within a hundred yards of us; but it soon vanished. Soon after ten, however, it was really in sight; but in consequence of the shallow muddy shores it was impossible to approach the water's edge, while the ground to a considerable distance was covered with a thick incrustation of salt. Hamilton
The Sultanate of Rum ended in 1243 when a Mongol army invaded Anatolia; it was an expedition having the sole objective of sacking and looting, but it weakened the supremacy of Konya over the other parts of the country. In 1276 a revolt against the Mongols saw some regional leaders manage to conquer Konya; eventually two groups increased their power: the Osmanli (Ottomans) who had their capital at Bursa in the north-western part of the country and the Karamanoglu (or Karamanids) in its southern part; the latter had their capital at Laranda (today Karaman) and they controlled Konya too.
In 1403 central Anatolia was invaded by Timur (or Tamerlane) who defeated Bayezid I, the Ottoman sultan. The Karamanids tried to take advantage of the Ottoman crisis and briefly conquered Bursa. The final confrontation occurred in 1468 when the Ottomans took Laranda, after having conquered Konya.

View of the countryside between Sultanhan and Kayseri; in the distance Mt. Argaeus 13,124 ft. (Erciyes Dagi)

Wednesday, July 19. (1836) We soon reached the elevated table-land; this was covered with boulders of basalt, or lava, derived from the degradation of a basaltic plateau, with which a portion of the table-land is capped. The view of Mount Argaeus was very fine, towering far above every other hill, and perfectly clear: but there was less snow on the summit than I had expected to see. Hamilton
Central Anatolia is a vast tableland (height: 3,000-4,000 ft) surrounded by high mountains which prevent many rivers from reaching the sea. For this reason there are several lakes, the size of which varies according to the season; in summer, parts of them become dry and are covered by a thick layer of salt.
The monotony of the landscape is interrupted by some extinct volcanoes. Even today large extensions of the tableland are almost unpopulated; the presence of water and of intensive farming is signalled by rows of poplar trees. 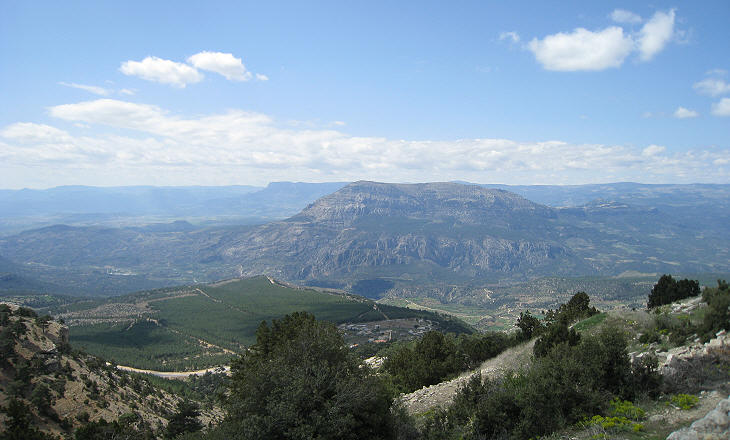 Koja Kallessi (Alahan) is situated to the north of the town of Mut - high up on the north-eastern slope of the Calycadnus valley. The road from Mut follows the most direct route to Karaman. (..) The ruins of Koja Kallessi are situated about 3000 feet above the Calycadnus valley looking over the junction of the two great river valleys through which the two branches of the ancient Calycadnus run.
Arthur C. Headlam - Ecclesiastical sites in Isauria - 1892
The tableland is separated from the Mediterranean Sea by the Taurus Range; only a few passes allow communication between the coastal region and the tableland; the valley of the Calicadnus is one of them together with the Cilician Gates near Lampron Castle. 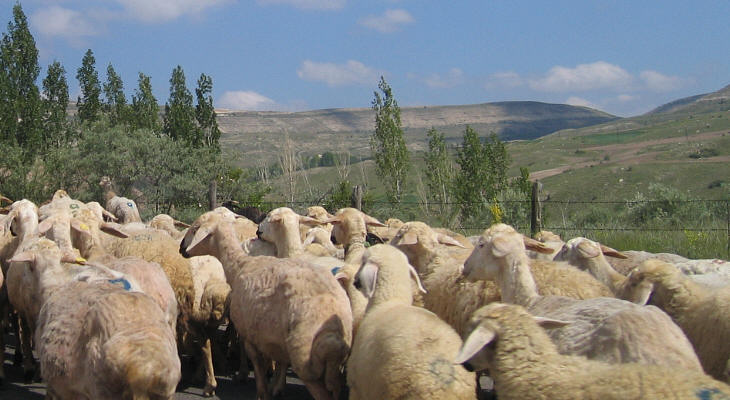 The road is not usually busy, but occasionally .. (near Sivas)

1908 Haydarpasa Station on the Asian side of Constantinople (it was designed by architects Otto Ritter and Helmut Conu in a German-Renaissance style).

To avoid these dangers and inconveniences, you are oblig'd to stay for the Caravans, that go for Persia or the Indies, which never set out but at certain times, and from certain places. These Caravans set out from Constantinople, Smyrna, and Aleppo. And it is from one of these Cities that a Traveller must set out, that intends for Persia, whether he keeps company with the Caravan, or will hazard himself alone with a Guide, as once I did. Tavernier
Although the title of this section makes reference to the "Long Road", the actual itinerary follows a different route to include Karaman and Mut. Towards the end of the XIXth century the Ottoman Empire, backed by the German one, decided on the construction of a railway to replace the old caravan trail. It was meant to link Constantinople with Baghdad and the Persian Gulf. Its first leg reached Konya: it was extended via Karaman and Adana to the Ottoman provinces in Syria and today's Iraq. 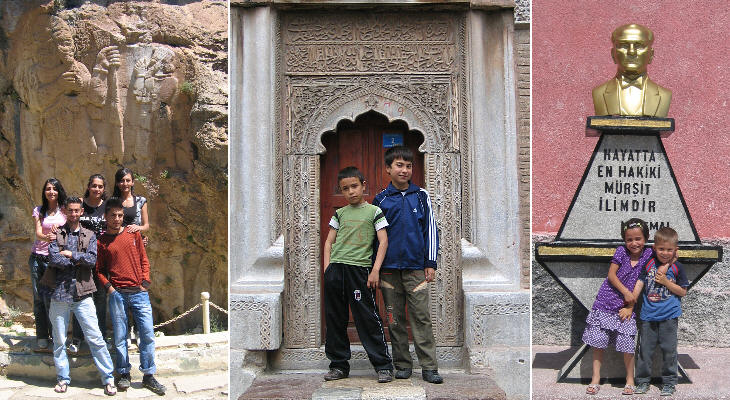 The Seljuks were imbibed with Persian culture and art: this section is mainly devoted to the monuments built by them, but there are also references to buildings and works of art of the civilizations which came before (Hittite, Roman, Byzantine) and of that which followed (Ottoman).

Tuesday, July 18. (1836) At a quarter after nine we were on the extreme edge of the table-land, with a deep valley beyond. On arriving at this edge I witnessed a most curious and extraordinary sight: in the several valleys spread out beneath our feet, many thousand conical hills, or rather pointed pinnacles, varying in height from 50 to 200 feet, rose up in all directions, so closely arranged that their bases touched each other, leaving only a narrow path between them, and presenting a most strange and inexplicable phenomenon. In many places they were so slender and close together, that they resembled a forest of cedars, or lofty fir-trees. Hamilton
This section shows also some of the unique rocks of Cappadocia.

In some of the provincial towns covered in this section, the sight of a foreign traveller taking pictures is still unusual. Children are perfectly aware of the functioning of digital cameras and do not miss the opportunity of having an immediate portrait. 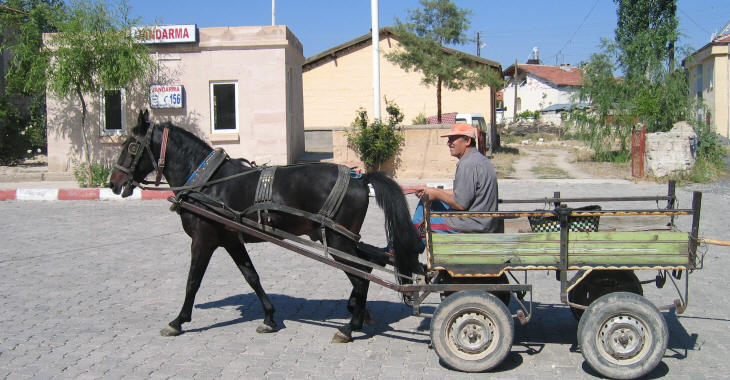 Cappadocia was named after Persian "Katpatuka" which meant "the land of beautiful horses". A horse earns its living at Cavusin

The image used as background for this page shows Mevlana's tomb at Konya.