- Serifo (Seriphos)
(detail of a 1651 engraving by Marco Boschini)

Everyone landing at Seriphos must naturally think of those frogs which Pliny tells us were always silent here, and it was a disappointment to me when I heard them croaking gaily on the little plain down by the harbour. I confess I believe that the saying about the frogs of Seriphos being silent referred to the boorishness of the inhabitants when they visited Athens. (..) The antiquities left in Seriphos do not point to any very great artistic merit in the days of old.
James Theodore Bent - The Cyclades - 1885

Serpho is a strange romantic place nothing but, rocks, precipices abrupt quarries and naked promontories shew themselves on every hand.
Thomas Broderick - Letters from Several Parts of Europe, and the East: Written in the Years 1750 etc.
Seriphos is an island with lovely outlines; the town is built on a conical, escarped hill, just above the harbour, with caves and rocks all over it. (..) Modern white houses are now clinging like mussels to these rocks, and the summit is crowned with the remains of a mediaeval castle. Bent
Chora, the main village, is located at the very top of a hill near a bay on the southern coast of the island; the old part is still clearly distinguishable from the later expansion of Chora on a lower terrace. 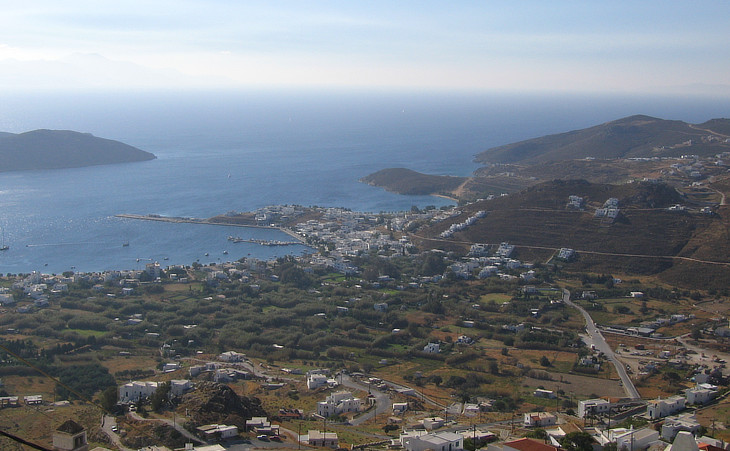 The harbour and the plain seen from the town

I was extremely pleased with the face of the country but I could guess the inhabitants would have been full as well satisfied with it if it had been richer. They starve and there is but one town on the whole island. Broderick
The village of Livadhi, by the harbour, is small but tidy, and we there partook of refreshments in a clean fisherman's cottage off a table rudely carved with all sorts of fish designs. The tiny plain down by the harbour is a pattern of fertility. There is a well in each field; pomegranates, figs, and almond trees abound. Bent
Serifo, like nearby Sifno and Argentiera was known for its mines: these were exploited also in modern times and the island was the site of one of the first major Greek strikes (1916): it ended in bloodshed. The mines were eventually closed in the 1980s and this caused a dramatic economic crisis with a significant reduction of the population. The oldest part of the town

They call it St Nicolo and of all the towns I have seen it is the most extraordinary in its figure and situation. Tis at about three miles from the port and is built round about a most hideous and horrible rock, black, abrupt and rugged. What a prospect for people to have chosen for their windows! Broderick

En route to the castle

We climbed up the steep ascent to the town on foot, as did the rest of the population who had come to see the steamer arrive. Bent
The houses which formed a sort of enclosure have been largely modified, but the access to the top of the hill through a series of narrow and long steps remains rather difficult.

Walls of the old fortifications

The summit of the hill, and the castle crowning it, were at length reached, and here the schoolmaster showed us a niche in which, he said, once stood a statue of a king of Seriphos, which the English had taken away. Bent
The walls of the castle have almost entirely disappeared, but there is still a very old building clinging to the rock.

Captain George's house was a new one, at the lower end of the town, really quite a mansion for the islands. (..) Over the gateway to the castle was a coat of arms, and 1433 over it; so I felt convinced that the schoolmaster alluded to a statue of one of the Latin dukes who ruled in Seriphos. But, though the English have been great robbers in Greece in their day, I question if anyone ever burdened himself with the statue of a Crispi or a Sommaripa. Bent
An unusually elegant house is decorated with a simplified coat of arms of the Kingdom of the Two Sicilies (which ended in 1860): it belonged to a local landlord who acted as vice-consul; the inscription is in Italian, which was largely spoken in the Aegean Islands and was the official language for commercial transactions until the beginning of the XIXth century.