You may wish to see two introductory pages to this section or Moorish Seville first. 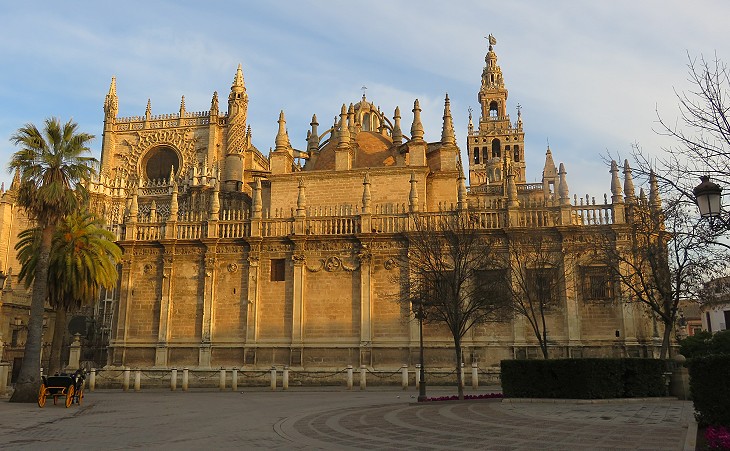 The river Guadalquivir was anciently called Baetis: its present name is Arabic, and signifies the Great River. (..) It falls into the ocean at San Lucar, after a course of seventeen leagues from Sevilla. (..) This river is neither broad nor rapid, but very deep. There were at the time I was there fourteen Dutch vessels, of two or three hundred tons burthen, lying near the bridge, waiting for their cargoes of wool.
Richard Twiss - Travels through Portugal and Spain, in 1772-1773
Three hundred thousand Moors are said to have left the city upon the capitulation in 1248, and to have carried their arms and industry to such countries, as were still obedient to the law of Mahomet. It is difficult to conceive how Seville could continue to be a great and populous town after such an emigration; yet we find it in a few years enlarged, adorned with new buildings, the chief of which was the cathedral, and long enjoying the rank of one of the most considerable cities in Spain. Its most brilliant epoch was soon after the discovery of America, when all the new-found treasures were poured into Europe from the fleets that returned from the new hemisphere into the Guadalquivir, and made Seville the magazine of its invaluable productions. The sovereign frequently honoured this place with his presence; merchants from all parts flocked hither to open houses of commerce, or to provide themselves with goods for foreign markets; the sailors and adventurers of the Indian fleets rendezvoused here, and with wanton prodigality lavished the wealth, which they had acquired in America. Then indeed was the time, when the Spaniard cried out in the fullness of his heart, "Quien no ha visto Sevilla, no ha visto maravilla" (He that has not seen Seville, has not seen the wonder of the world). (..) The cathedral is more cried up than I think it deserves.
Henry Swinburne - Travels through Spain in the Years 1775 and 1776 in which several monuments of Roman and Moorish architecture are illustrated. 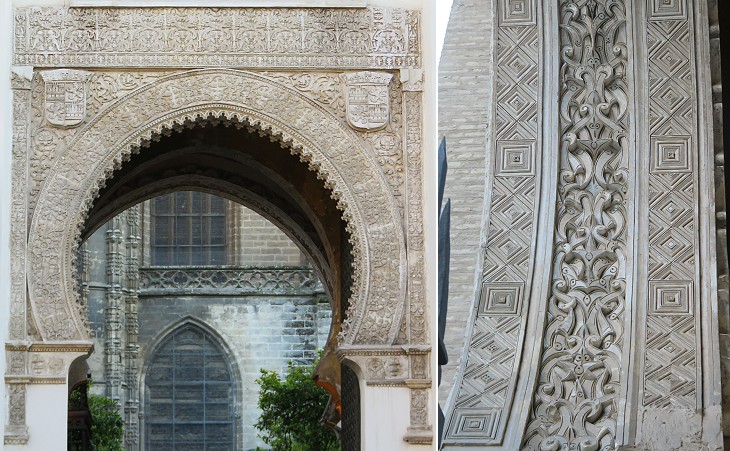 Cathedral: Puerta del Perdon and detail of its decoration; see it from Patio de Los Naranjos

The ornamental parts are but clumsy imitations of the models left by the Moors. Swinburne
Enter Patio de Los Naranjos at the N. by the rich Puerta del Perdon, which was modernized in 1519 by Bartolomeu Lopez. Ford
Mudéjar is the term used to indicate the Moorish style which characterizes many monuments and works of art which were built/made after the conquest of Muslim Spain by the Christian kingdoms in the north of the country. The Royal Alcazar of Seville is regarded as the finest mudéjar monument of Spain, but in the mixture of styles which were employed in the design of the Cathedral, the full decoration of which lasted until the 1920s, the use of mudéjar patterns is very limited. 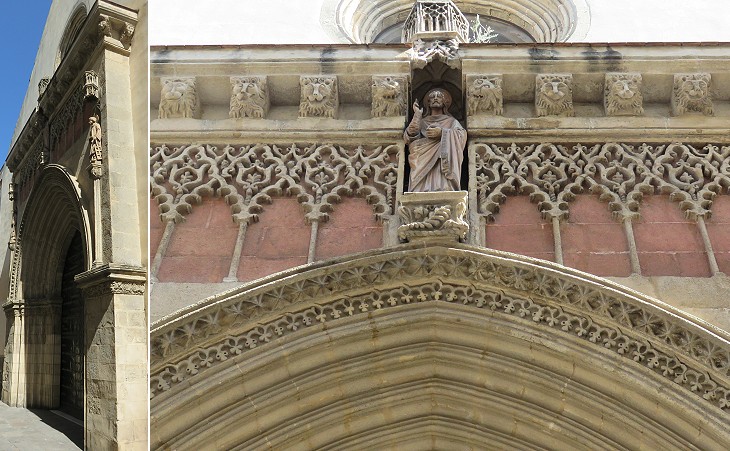 Most of the churches are built and ornamented in so barbarous a style, that I had not the patience to examine them. Swinburne
Enduring is the mark which Moorish intellect and science have stamped on the Spaniard whose language proves the greatness of obligations which pride would vainly deny; his dictionary has scarcely a word that refers to those arts by which man is benefited and civilized whose origin is not Arabic.
The Quarterly Review - Spanish Architecture - 1845

Decorative features of the Almohad section of Giralda or horseshoe arches can be noticed in many otherwise traditional Romanesque or Gothic churches of Seville. 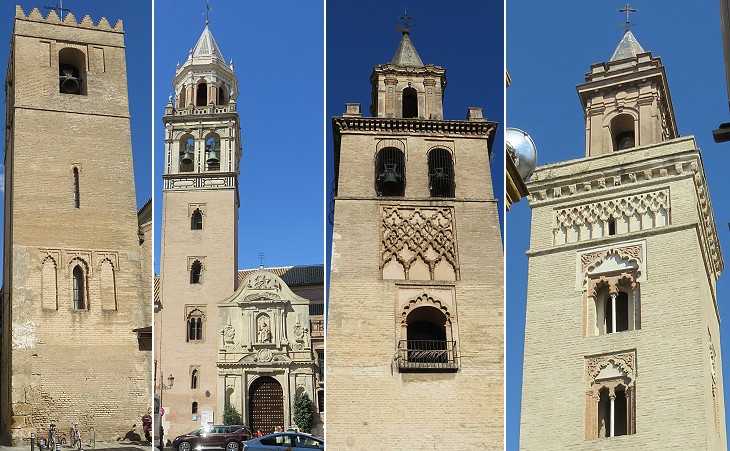 The Arab tower of San Marcos is considered the most beautiful of any, save the cathedral, in Seville: some delicately cut cornice-work in stone is seen towards the top; the whole effect is handsome and the several parts appear well proportioned.
Frank Hall Standish - Seville and its Vicinity - 1840
Of the other Moorish minaret or muezzin towers, observe those of San Marcos, Santa Marina, Santa Catalina and Omnium Sanctorum. That of San Pedro has been modernized. Ford 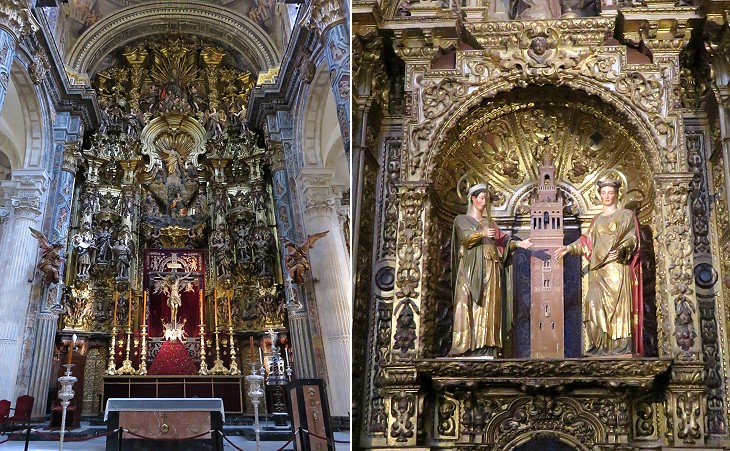 The Giralda is under the especial patronage of the two Divas the Santas Justina y Rufina, who are much revered at Seville, and not at all anywhere else. In a thunderstorm, 1504, they scared the devil, who unloosed the winds to fight against this church: this, their standing miracle, is the one so often carved, and painted by Murillo and others: and, due proportions considered, these young ladies must have been at least 500 ft. high, and a tolerable match for the father of all lies. Ford
El Divino Salvador was built in 1670 to replace a falling mosque which had been converted into a church. Its design reflects the impact of Roman Baroque churches, but its decoration exceeds the Roman pattern, perhaps a heritage of the Moorish tradition. 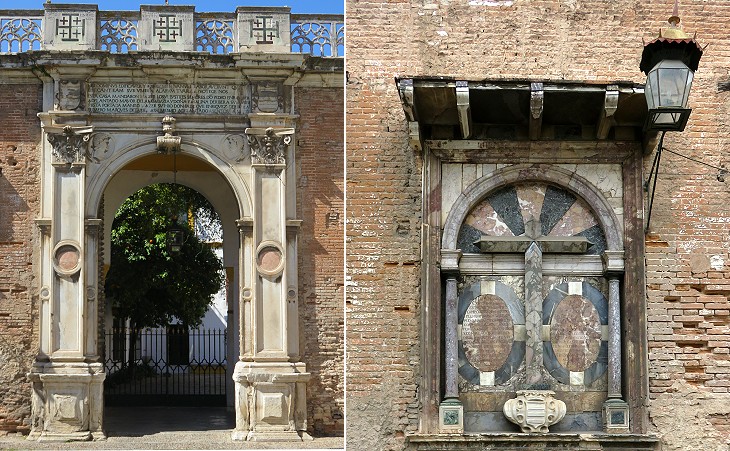 Casa de Pilatos: (left) portal; (right) First Station of the Cross on a wall near the palace

Next visit the Casa de Pilatos, so called because said to be built in imitation of that of Pontius Pilate at Jerusalem. The black cross in the Patio is the point from whence the Estaciones, the stations to the Cruz del Campo, begin. (..) This palace was built in 1533, by the great nobleman of the day, Fadrique Enriquez de Ribera, in commemoration of his having performed the pilgrimage to Jerusalem in 1519. Ford
Fadrique Enriquez de Ribera can be regarded as an early Grand Tour Traveller. Upon returning from a pilgrimage to Jerusalem at the end of 1519 he decided to visit Florence, Pisa, Rome, Naples and Genoa. The portal of his palace was made in Genoa and then shipped to Seville and other parts of the complex were designed in Italian Renaissance style (e.g. the buildings of Jardin Grande - it opens in another window). 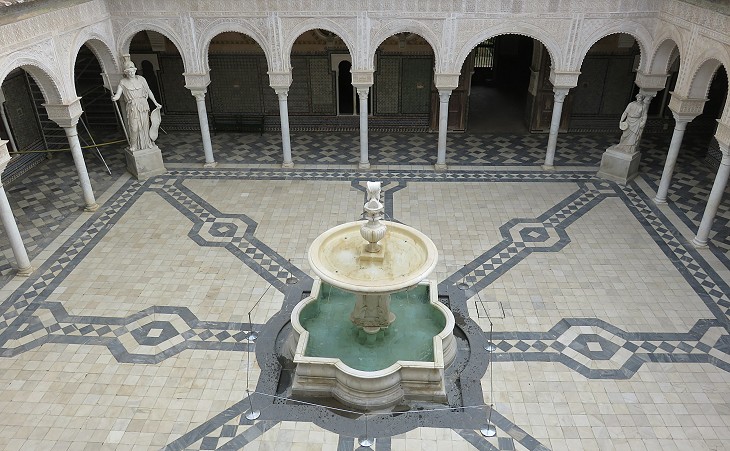 Casa de Pilatos: courtyard; the image in the background of this page shows a detail of its mudéjar decoration

Many of the houses have large courts, surrounded by galleries on columns, with fountains in the middle: there are paintings in fresco on some of the walls. In summer the families live in the galleries, or courts, where they spread tents. Pilate's House, so called by the people, is a private house belonging to the dukes of Medina Celi. It was built about the year 1520: its principal court is very fine; it has a piazza all around it supported by marble columns, with a handsome fountain in the middle.
Alexandre de Laborde - A View of Spain - translated into English for Longman, Hurst, etc. 1809
The architecture proves how closely the Spaniards of the 15th century imitated the Saracenic forms, and the influence their sensual civilization obtained over the Gotho-Spaniard, who with increasing power began to appreciate elegance and luxury. (..) Observe the grand Patio, with its fountains and injured Roman statues of Pallas, Ceres, and others. Ford
Some of the heirs of Fadrique Enriquez de Ribera were appointed Viceroy of Naples and they gathered a collection of antiquities in the palace. The courtyard is a strange mixture of Moorish and Italian elements, the fountain at the centre having the typical design of the fountains of Rome. 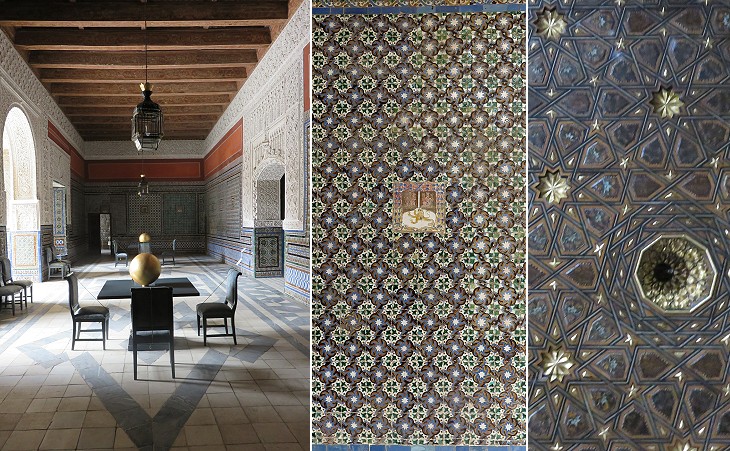 Ascend the magnificent staircase to the chief suite of rooms. Eyerything that stucco, carving, Azulejo, and gilding could do, was done. Ford 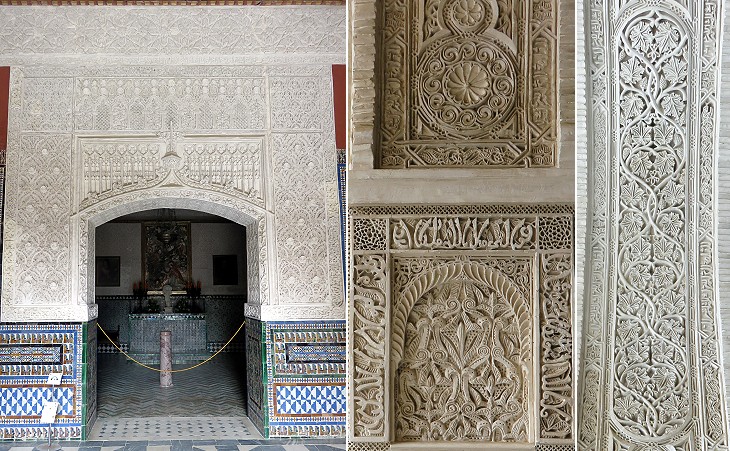 The Virgin's chapel is adorned in the most gorgeous Saracenic-Gothic style. (..) All is now scandalously neglected. Ford
Today the palace belongs to the Ducal House of Medinaceli Foundation, a private cultural institution established in 1980 at the initiative of the Duchess of Medinaceli, with the aim of conserving the historic assets that have come to be linked to the House over time. 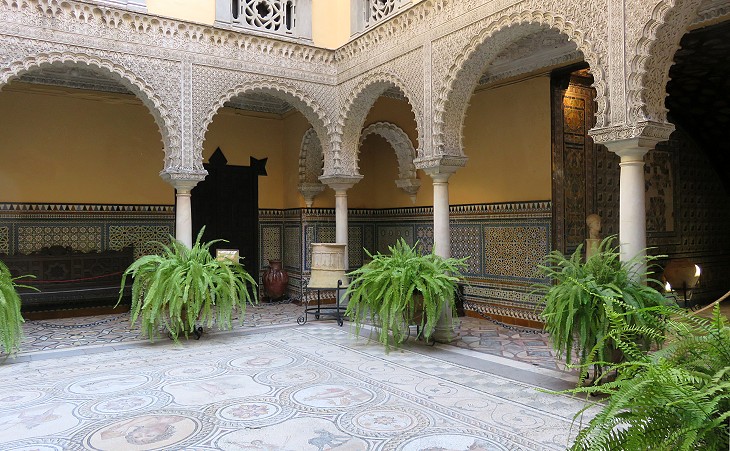 The same mixture of ancient works of art and mudéjar decoration characterizes this palace which was built in the early XXth century and can be regarded as an example of the eclecticism in art which was in fashion at the time. 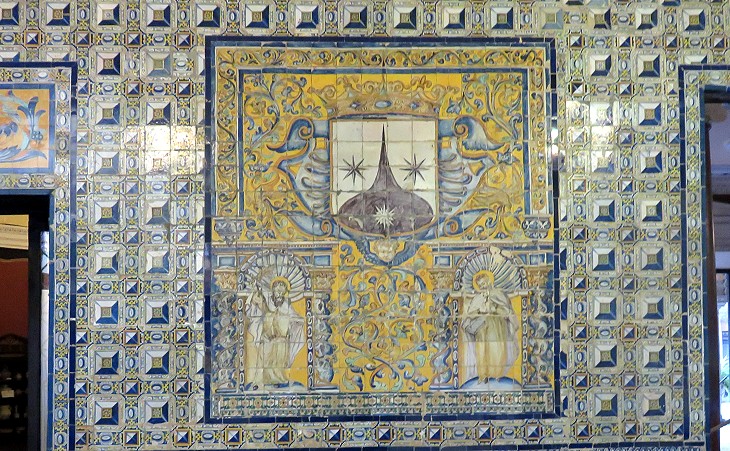 The cultural interests of Regla Manjon Mergelina, Countess of Lebrija were not limited to ancient Roman mosaics or Moorish vases. Similar to what occurred in Italy, in the second half of the XIXth century many Spanish monasteries and nunneries were closed, either because of confiscation by the State or because of a strong decrease in the number of novices; the Countess managed to save some of their artefacts from destruction. 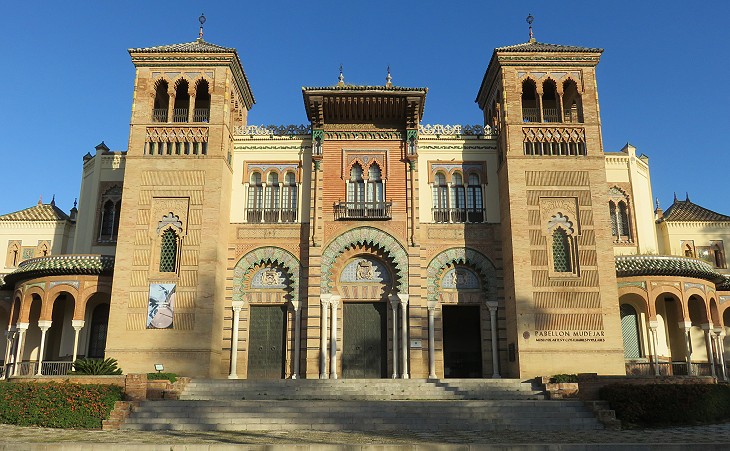 The Visigoths took lessons from the vanquished Romans as their descendants (the Spaniards) did from the subdued Moors especially in decorative architecture, yet none have ever evinced greater ingratitude in destroying the models of their teachers, witness the degraded Alhambra to whose fascination the Spaniard alone is blind. Familiarity has bred a contempt for monuments which he has disfigured and to whose past beauty and present poetry he is utterly insensible.
The Quarterly Review - Spanish Architecture - 1845.
The above statement was no longer true in the XXth century when Spanish architects began to design buildings in modern mudéjar style.
You may wish to see a page on the Norman-Arab monuments of Palermo, which, similar to those of Seville, are a blend of two styles. 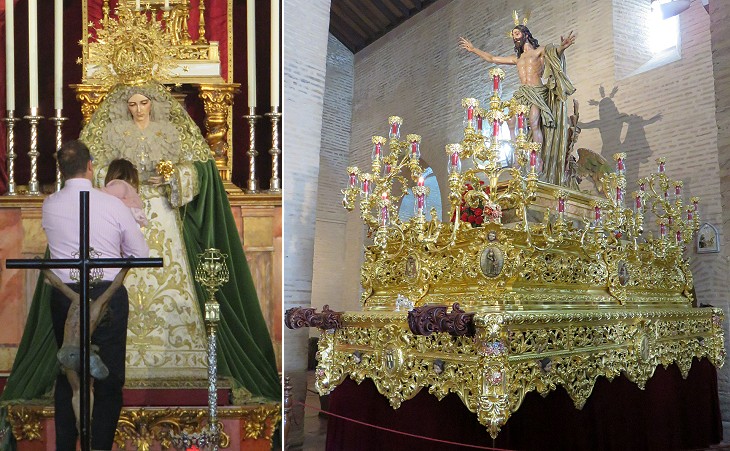 As it was the holy week, some part of the little time I was at Beja (on the road to Seville) was occupied in seeing Roman catholic functions and ceremonies. They are much more superstitious in those things here than in Italy, and add cruelty to superstition, in permitting the penitents to flog, and torment themselves in other ways, about the streets. The farther you get from Rome, the more such kind of penances are intermixed with religion.
Cristopher Hervey - Letters from Portugal, Spain, Italy and Germany, in the years 1759, 1760, and 1761
The religious functions are unrivalled, especially in the Holy Week - Corpus, St. John's Day - Christmas, with its Nacimientos, carols, and shepherd-dances - and the winter Rosarios. The ceremonial of the Semana Santa is second in interest to that of Rome alone, and is in many respects quite peculiar, such as in the Pasos, or painted and graven images, which are carried through the streets in solemn procession; then also the monumento or sepulchre, in which the host is buried, is lighted up in the cathedral, and forms a splendid sight, which must be seen to be really understood. Ford 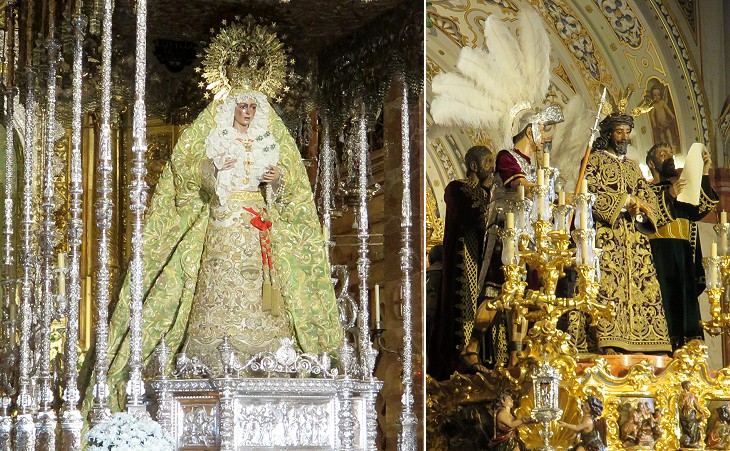 "Desde San Vicente, à la Macarena, ni se almuerza (breakfast), ni se come (lunch), ni se cena (dine)". The Macarena now, as it always was, is the abode of ragged poverty, which never could or can for a certainty reckon on one or on any meal a day; but they and their skins and jackets, are meat and drink to all lovers of the picturesque. Ford