Shaqqa is a small town east of Philippopolis (Shahba) in southern Syria; because of some imposing Roman ruins it has been associated with Maximianopolis in Arabia, a town mentioned as a dioceses in a list of bishops attending the 451 Council of Chalcedon. The Maximian referred to by the name of the town is most likely Diocletian's co-emperor. View of the countryside from ed-Deir (early March 2011); Jebel al-Druze on the horizon line

November 15th. Our way lay over the fertile and cultivated plain at the foot of the Jebel Haouran, in a north-easterly direction. In one hour and three quarters from Shahba we came to the village Shakka. (..) Its inhabitants grow cotton; they are all Druses, except a single Greek family.
John Lewis Burckhardt - Journal of an Excursion into the Haouran in the Autumn and Winter of 1810.
Shaqqa is located in Hauran, a region of Syria which enjoyed a period of great prosperity after being annexed to the Roman Empire by Emperor Trajan in 106 AD. Hauran is a low tableland which is limited to the west by the Golan Heights and to the east by Jebel al-Druze, a range of low mountains which today are named after the Druzes who migrated to this region from Lebanon and repopulated it in the XVIIth and XIXth centuries; these mountains separate Hauran from the Syro-Arabian desert, a combination of steppe and true desert which from Syria and Iraq reaches Jordan, Saudi Arabia and Yemen.

On the north side of the village are the ruins of what was once an elegant structure; but nothing now remains except a part of the front, and some arches in the interior. It is thirty paces in length, with a flight of steps, of the whole length of the building, leading up to it. The entrance is through a large door whose sides and architrave are richly sculptured. On each side is a smaller door, between which and the great door are two niches supported by Ionic pilasters, the whole finely worked. Burckhardt
The locals call Kaisariye (imperial palace) the imposing ruins of a palace which perhaps was the residence of the governor of the town; the façade is extremely well preserved and it is a rare example of this type of civilian buildings. 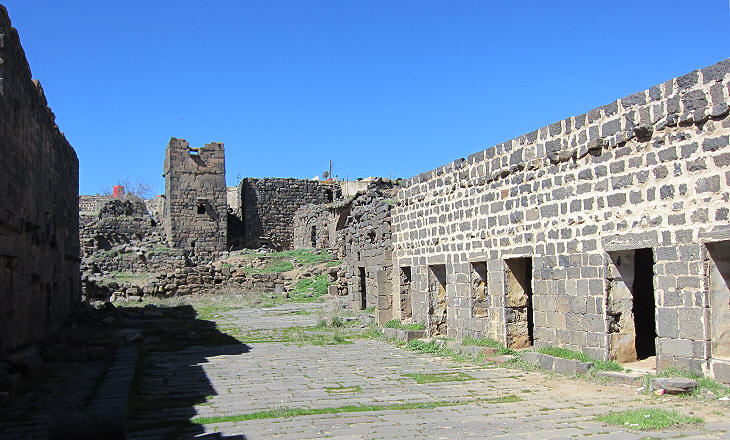 The residence was built around a large central paved courtyard which was not surrounded by a portico, but gave direct access to halls and rooms. 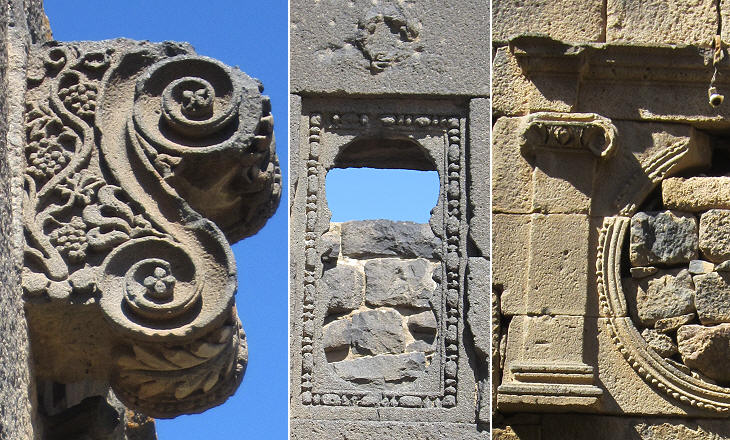 Details of the decoration of windows

An unusual aspect of Kaisariye is the relatively large number of windows opened in the external walls; traditional Roman houses did not have such windows and all rooms received light from doors and more rarely windows in the courtyard.
The shape and decoration of the windows varies; in some cases the elaborate decoration is based on grapes, a reference to the rich agriculture of the region. 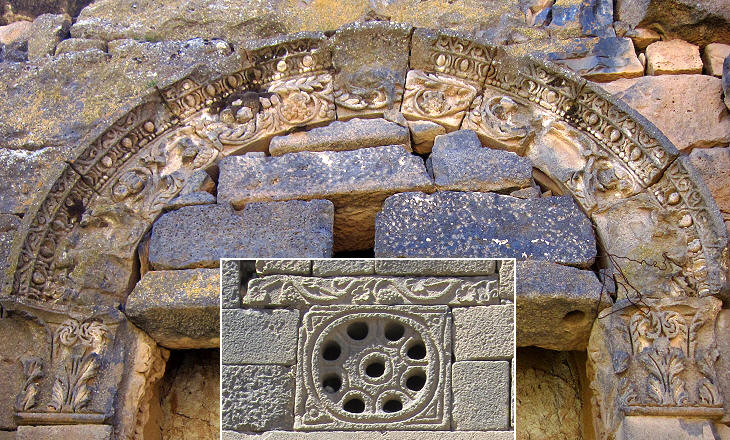 Internal portal; (inset) another detail of the decoration

Kaisariye is generally thought to have been built at the middle of the IIIrd century; this timing would make its construction to coincide with the monuments of Philippopolis, which however show a very poor decoration, so maybe Kaisariye was built at a slightly earlier time when craftsmanship was at a higher level. 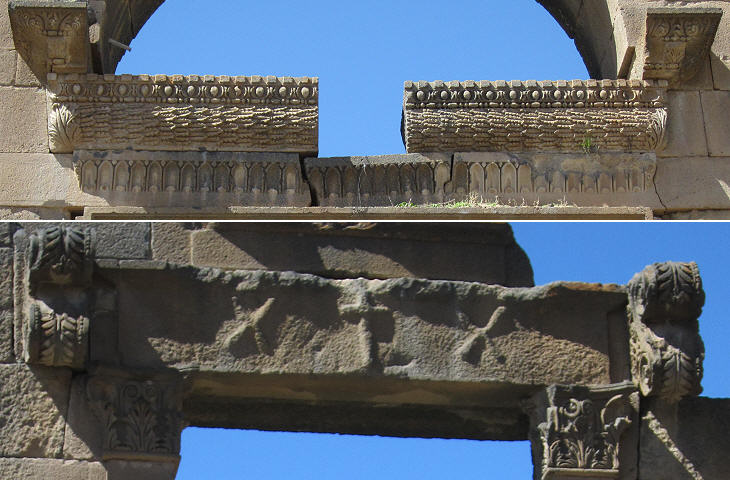 (above) Lintel of the main entrance; (below) a modified lintel with Christian symbols

The palace continued to be inhabited during the Byzantine era and a building near the palace was turned into a church; Christian references were added by erasing the previous decoration of some lintels. 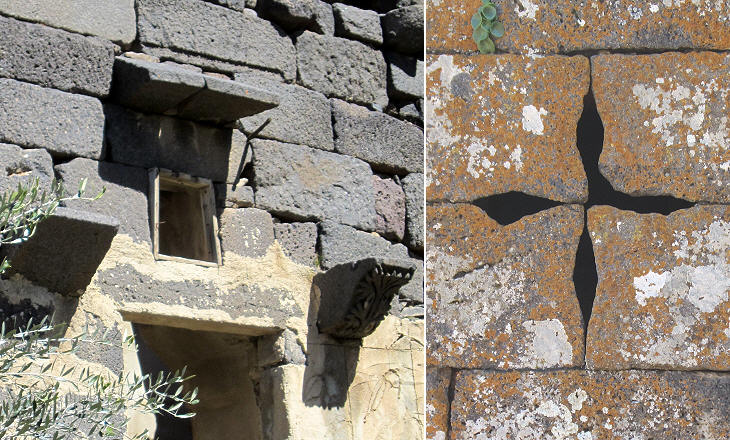 (left) Entrance of a former Roman tomb which now serves as meeting hall for the Druze community (see also the image in the background of this page); (right) a cross-shaped opening in the rear wall of the tomb

When exactly Maximianopolis was abandoned is difficult to say, although it is likely this occurred in the XIIIth century when the region was invaded by the Mongols from the north and a few years later by the Mamelukes from the south.
In the XVIIth century Druzes from Lebanon relocated to Hauran because of rifts among clans of their community; they were followed by more Druzes in the XIXth century; the newcomers repopulated some of the Roman towns and villages and nested their homes in the ancient buildings; although today the majority of the population has modern accommodation, some ancient buildings are still utilized. 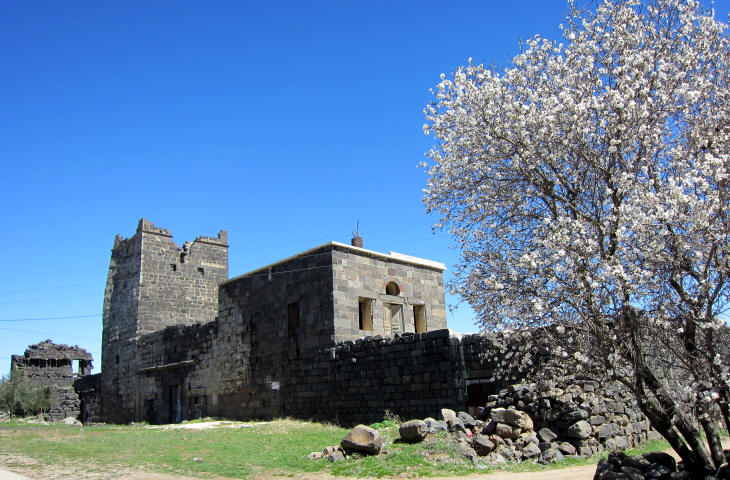 Ed-Deir, the monastery, a complex of ancient buildings

On its eastern side stands an insulated building, consisting of a tower with two wings: it contains throughout a double row of arches and the tower has two stories, each of which forms a single chamber, without any opening but the door. (..) There are several similar towers in the village. Burckhardt
This complex of buildings is now a farm; it is located to the east of Shaqqa; it was probably a civilian building which was turned into a fortified monastery by the Byzantines when the security of the region started to decline. 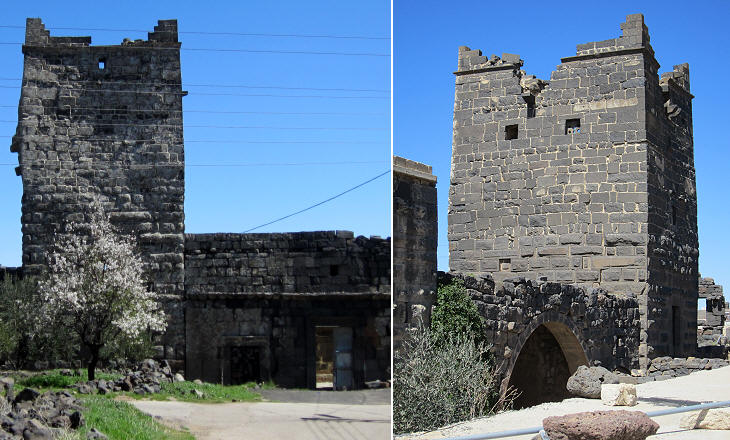 Views of the tower

The massive tower allowed the early detection of Bedouin tribes approaching the town from the desert behind the mountains; at Shahba, similar to the other Roman towns of the regions, buildings have the black colour of the basalt stone which was employed in their construction. 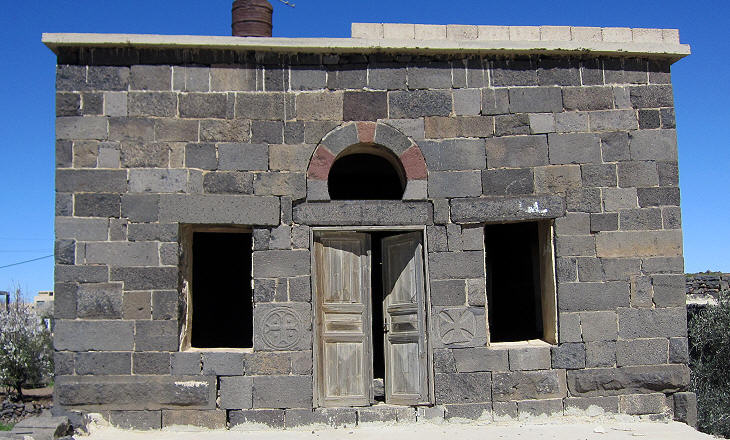 A hall on the upper floor which housed the church of the monastery, with crosses at the sides of the entrance 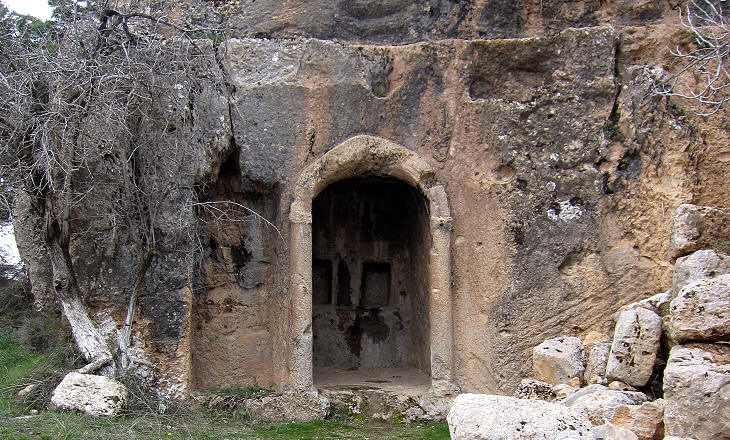 I was informed that about eighteen miles from Damascus, somewhere near the road, there is a village called Zeibdaneh, where, according to their tradition, Cain slew Abel.
Richard Pococke - A Description of the East and Some Other Countries - 1745
The Roman presence in southern Syria, in addition to the concentration of monuments in some towns, is documented by a large number of tombs, bridges and other buildings disseminated in the whole region around Damascus and not only in Hauran.
Zabadani is a modern ski resort in the Anti-Lebanon Mountains, very near the border between Syria and Lebanon and just a few miles away from Heliopolis (or Baalbek), the most important Roman town of Lebanon.