You may wish to read an introduction to this section or a page on the ancient walls of Spalato first. 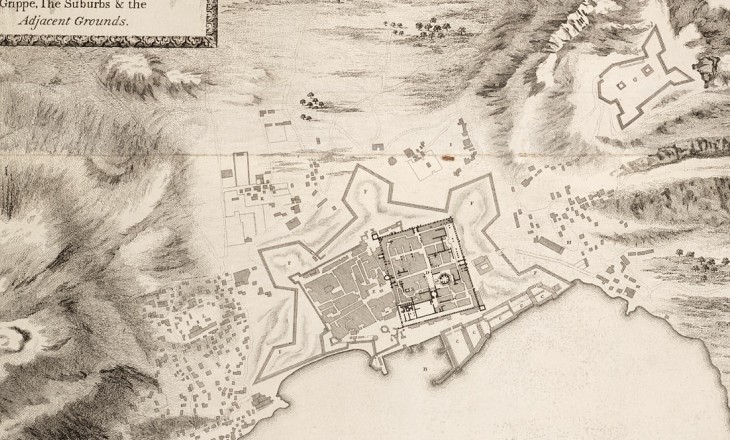 Map of Spalato showing its fortifications in an etching by Robert Adam (1728-1792), a Scottish architect and engraver who published "Ruins of the Palace of the Emperor Diocletian at Spalatro in Dalmatia" in 1764

Adam's map is an excellent tool to understand the development of Spalato through the centuries. The area of Diocletian's Palace is clearly identifiable because its ancient walls are marked in bold. A "new" town grew to the west of the old one. It had approximately the same size. The Venetians acquired Spalato in 1420 and they protected the town by using some of the ancient walls and by building new ones. During the War of Candia (1645-1669) a new enclosure with large spearhead bastions was built at a short distance from the old one. The fortress of Gripe on a nearby hill (upper right corner in the map) completed the fortification system of the town. (left) View of the Venetian tower and of the Cathedral leaning bell tower in an etching by R. Adam; (centre) the tower today; (right) erased Venetian coat of arms and inscription

In the XVth century the harbour was protected by a high tower built with a white stone quarried on an island near Spalato. Its military importance subsided when the XVIIth century enclosure was completed. Today it is the main historical monument of the "new" town and it is located at the centre of a large square.
Venetian governors placed coats of arms and inscriptions on the tower to celebrate their achievements. Some of them were erased during the French occupation (1805-1814) and the remaining ones in the 1930s with all other references to the Venetian past of Spalato. The image used as background for this page shows another erased coat of arms on the walls near Porta Argentea. In the XVIth century some sections of the walls were upgraded to the requirements of cannon warfare. These walls proved effective in 1571 when Spalato was attacked by the Ottomans who were based in the fortress of Clissa only seven miles from the town. They were decorated with statues of winged lions placed inside elaborate frames. These statues can still be seen on Cyprus, on Crete, on Corfu, but not in Dalmatia. The Venetian origin of the walls is evident when one looks at the spared Madonna. 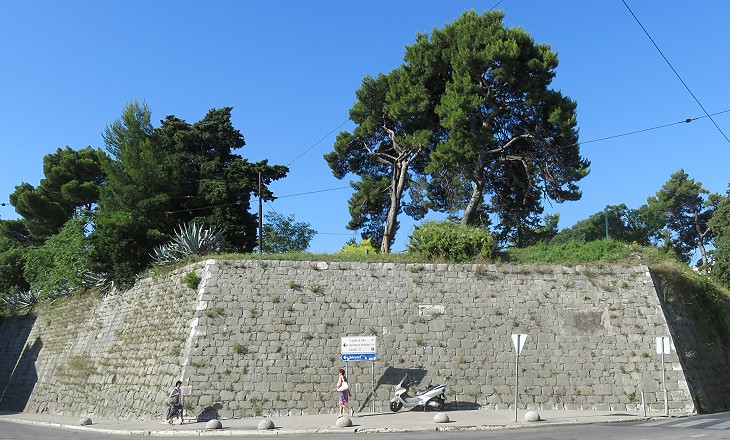 The new enclosure built during the War of Candia was an obstacle to the development of the town and already in 1807-1809 its eastern and western walls were demolished. The northern walls with three large spearhead bastions were bombed during WWII and only some sections of their lower parts still exist. 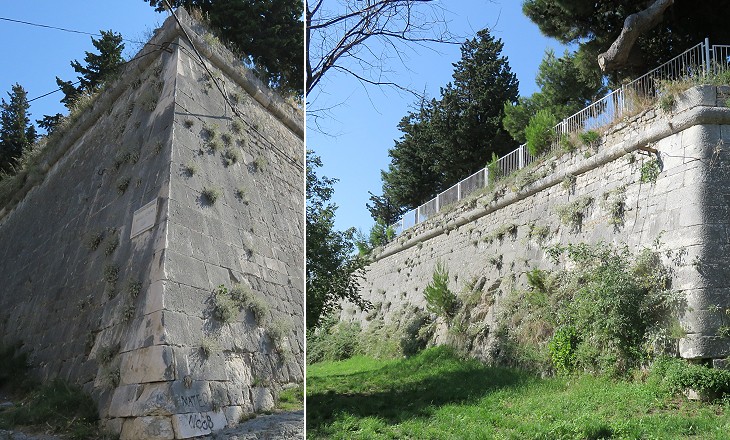 Walls of Gripe (or Grippi) Fortress

The hill where the fortress stands was yet to be fortified when it was occupied by the Ottomans to place their cannon and fire over the town. Eventually the Venetians built a small fortress with spearhead bastions to prevent the Ottomans from occupying the hill a second time. The fortress was upgraded by the Austrians and it was used for military purposes until recently. It now houses a small museum of the Croatian Navy (and a parking lot). 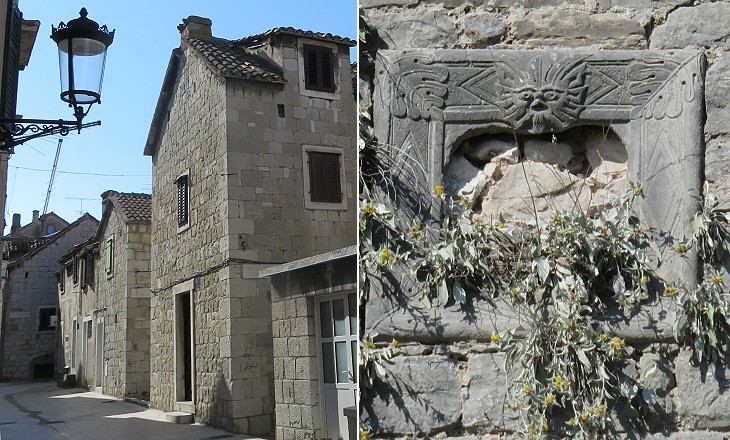 (left) Old houses on the road to the fortress; (right) a decorated opening for cannon at the fortress

The 1718 Peace of Passarowitz put an end to the wars between the Republic of Venice and the Ottoman Empire. One of its clauses allowed Ottoman merchants to reach Spalato with their caravans to sell their goods there or to ship them to their warehouses in Venice. A number of old stone houses on the road to the fortress show that the town developed beyond its walls during the XVIIIth century.
White mulberry trees were grown on the hill of Gripe to feed silkworms. Their cocoons were sold to silk factories in Venice. 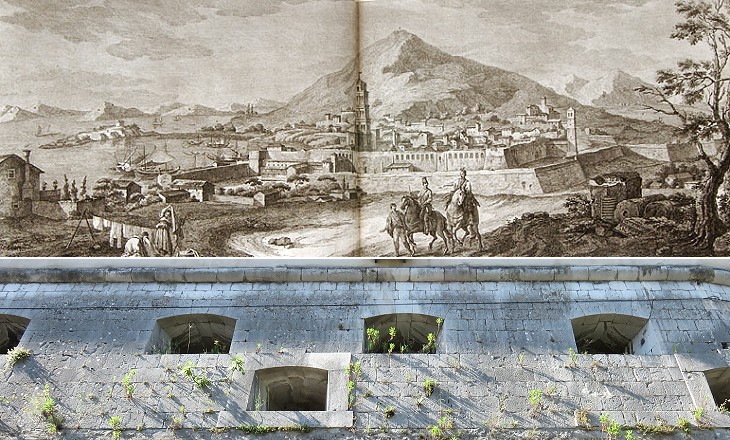 (above) View of Spalato from Gripe by R. Adam showing the two enclosures of the town; (below) modern artillery openings in the northern side of the fortress

Adam published in his book a lovely view of Spalato from Gripe. Today the view is impaired by many obstacles, but it is still worthwhile to reach the weedy bastions of the fortress to see the Cathedral bell tower (as shown in the introductory page). 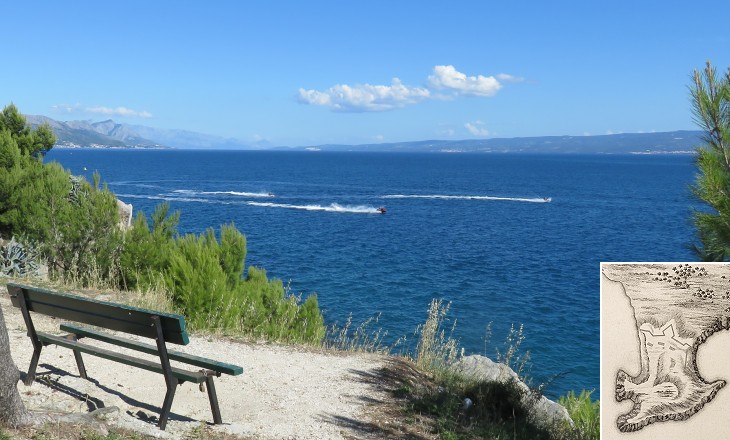 Site of a fortified area (Fortezza delle Botticelle) on a promontory east of the harbour; (inset) map by R. Adam

The access to the harbour of Spalato was protected by a cannon battery placed on a small promontory to the east of the town. Today the former site of the battery is very close to the modern ferry harbour. There is no evidence of the walls shown by Adam in his map, but one can easily understand why the promontory was chosen. It enjoys a commanding view over the strait between the mainland (left) and the Isle of Brac (right).
In order to complete the list of fortifications built by the Venetians one has to mention a number of towers (Castelli) along the coast between Spalato and Traù. They provided peasants with a shelter in case of raids by the Ottomans or more likely by bands of hajducks (outlaws). Brigandage was widespread to the point that even The Argus of Melbourne (January 4, 1882) informed his readers that Brigandage in Dalmatia, a maritime province, and the most southern portion of the Austrian dominions, is greatly on the increase, the mountains having become infested with regularly-organised bands. In a struggle which has just taken place between a party of these brigands and the police, four of the gendarmes were killed.