You may wish to read an introduction to this section or a page on the Cathedral first. 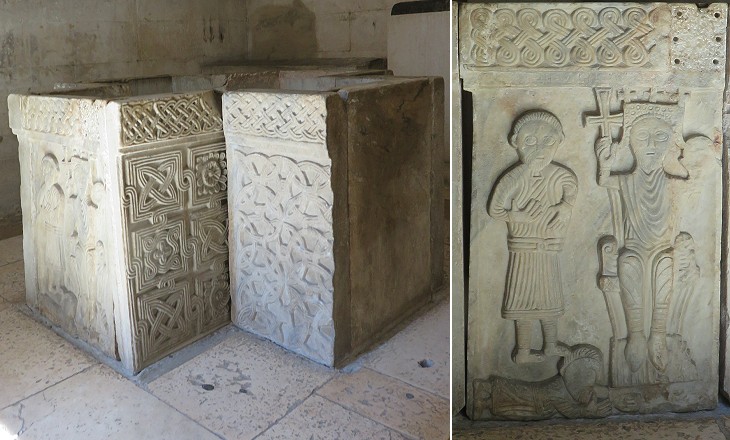 Baptistery inside the former Temple to Jupiter: (left) XIXth century baptismal font built with plutei (parapets) from an ancient church of Salona; (right) relief supposed to portray the coronation of Demetrius Zvonimir, King of Croatia, which took place at Salona in 1076

In 650 Giovanni of Ravenna, Archbishop of Salona, moved his See to Spalato where he turned the Mausoleum of Emperor Diocletian into the Cathedral of his archdiocese. Salona however was not entirely abandoned and new churches were built on the site of old ones. Zvonimir was crowned King of Croatia and Duke of Dalmatia by an envoy of Pope Gregory VII in one of these churches. He adopted the Latin name of Demetrius as a sign of his support for the use of that language and for the Roman Church. He banished the use of the Cyrillic alphabet and he fought the supporters of the Patriarch of Constantinople. These events might seem buried in the past, but alphabet (Latin/Cyrillic) and religious (Roman Catholic/Greek Orthodox) divisions were among the causes of massacres between Croats and Serbs during WWII and the Yugoslav Wars of the 1990s. 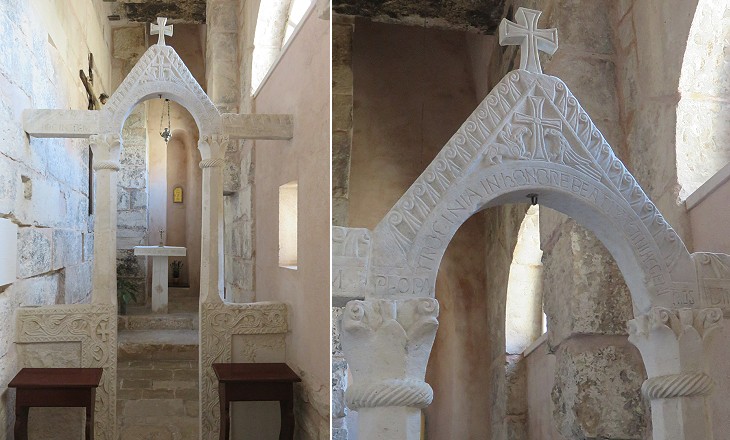 The oldest church of Spalato was a passage inside the ancient walls near Porta Aurea, where perhaps the first Christian soldiers gathered to pray. The septum marmoreum which separated the choir from the aisle bears an inscription indicating that the church was dedicated to St. Mary, St. Martin (patron of soldiers) and St. Gregory the Great. The inscription is not dated, but it is believed to have been written in the Xth century. Eventually the tiny church was assigned to a nearby Benedictine convent. 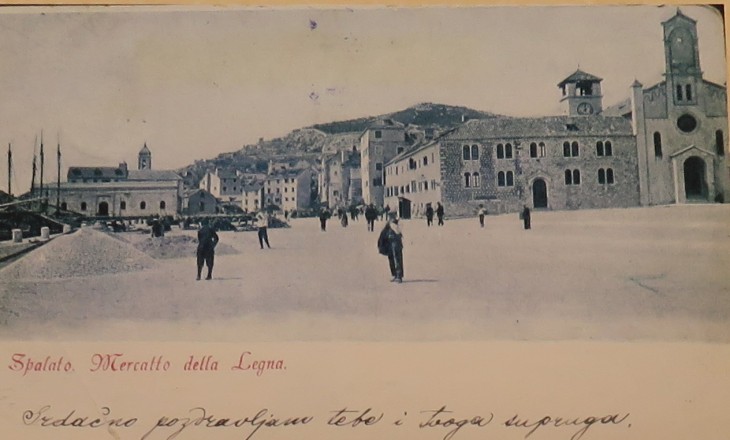 The Franciscans established their first monastery at Spalato in the early XIIIth century. It was located outside the town by the sea in an area which eventually became the timber market (Mercato della Legna).
Franciscan monks played a major role in setting the foundation of the modern Croatian language by writing a history of the country in 1756 and by developing a Latin-Italian-Croatian dictionary (1801-1810). In 1970 Nikola Tavelic, a Franciscan monk who was sentenced to death at Jerusalem in 1391, was the first Croatian to be canonized. 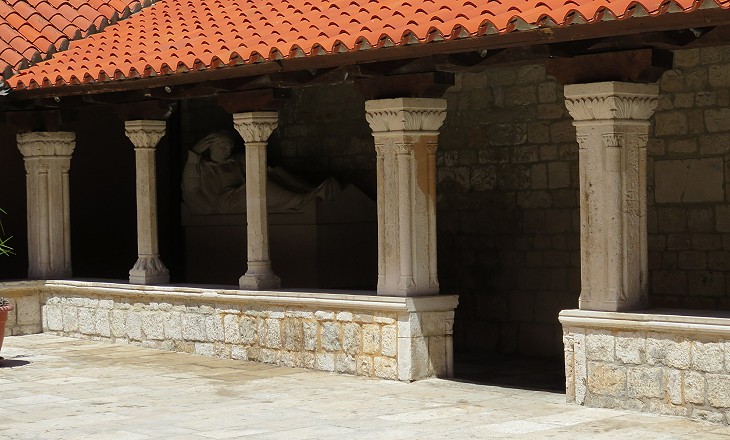 The existing church and convent contain nothing of architectural importance, but there is a pretty little cloister surrounding a gay flower garden, of which the columns carry wooden architraves resembling in a humble fashion the well- known cloister of S. Gregorio at Venice.
Sir Thomas Graham Jackson (1835-1924 one of the leading architects of his time) - Dalmatia, the Quarnero and Istria - 1887
The monastery and the church underwent many changes after Graham Jackson's visit, including those caused by WWII bombing. Only the cloister, although largely reconstructed, retains its original aspect. 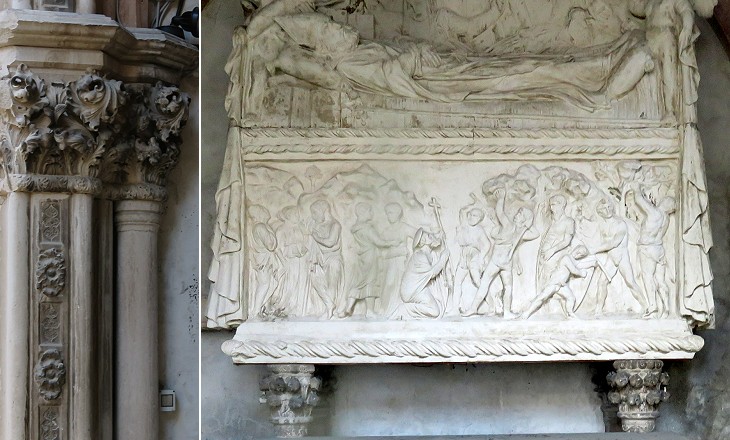 Details of the Chapel of St. Rainerio of Cagli, near Porta Aurea

In 1878 a fire destroyed a Benedictine convent outside the northern walls of the ancient town. Only the bell tower and a finely decorated chapel were spared. St. Rainerio was a disciple of St. Ubald, Bishop of Gubbio and in 1156 he was appointed Bishop of Cagli, a nearby town. In 1175 he was sent by Pope Alexander III to Spalato. In 1180 he was stoned to death by peasants who refused to recognize that their land was owned by the Church.
In 1444-1448 the chapel where Rainerio was buried was decorated by George from Sebenico (aka Giorgio Orsini), an architect and sculptor who designed another chapel in the Cathedral of Spalato and is best known for his works at Sebenico and Ancona.
Rainerio was canonized in 1690 by Pope Alexander VIII for having defended the material possessions of the Church, a sensitive issue in that period, because King Louis XIV challenged the Papal sovereignty over Avignon, which his troops had occupied in 1688. 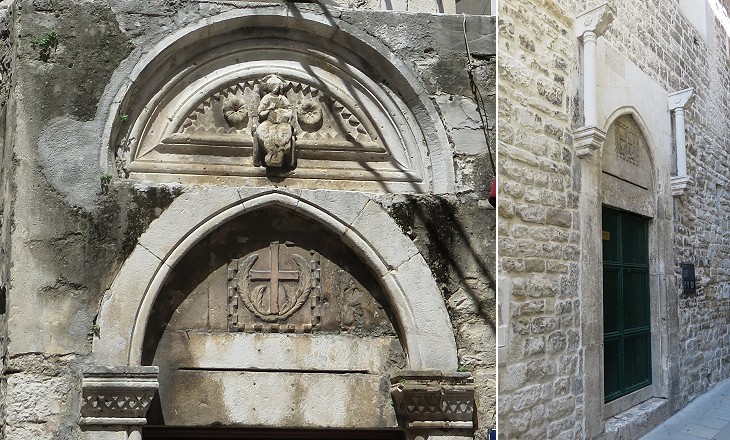 Two entrances to the Church of the Holy Spirit

The two entrances are located in two different streets and they indicate that the property of the Brotherhood of the Holy Spirit was not limited to the church, but included some other facilities, such as a hospital. The interior houses some Venetian altars. After WWI and until September 1943 it was the church of the dwindling Italian-speaking community. It was a parish church. Apparently it has been deconsecrated. 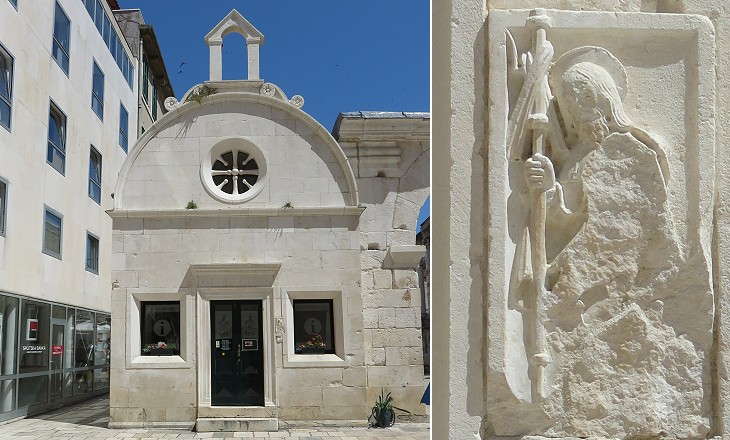 St. Roch's and a small relief portraying the saint near the entrance

In 1487 a brotherhood dedicated to St. Roch, protector against plague, was founded in Venice. The brotherhood acquired the body of the saint and in 1515 the construction of a grand palace housing the brotherhood began. At approximately the same time a chapel dedicated to the saint was built near the Peristyle of Spalato. Its façade reflects the move of Venetian architecture from Gothic to Renaissance patterns which first occurred in the design of S. Maria dei Miracoli. 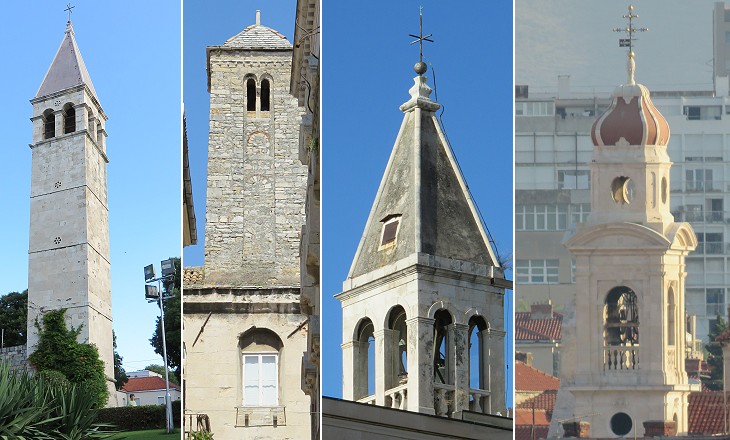 The skyline of historical Spalato is characterized by the late XIXth century bell tower of the Cathedral, but additional bell towers are worth being mentioned. In general they show patterns which can be seen in other Venetian towns (e.g. Zante and Corfu). 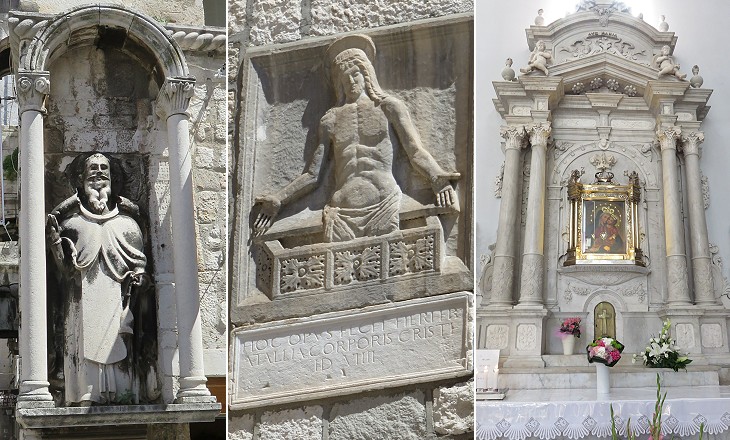 (left) Statue of Count Cipriano de Ciprianis as St. Anthony on his knees near Porta Ferrea; (centre) relief near the Cathedral ; (right) Venetian altar inside Church of our Lady of Health

All reliefs and inscriptions related to the Venetian past of Spalato were carefully removed in the XXth century, with the exception of those having a religious content.