You may wish to read an introduction to this section and a page on the building as a Mausoleum for Emperor Diocletian first. 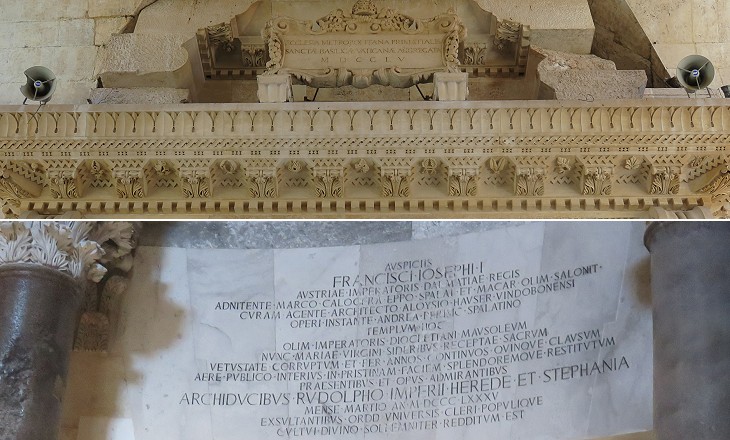 Cathedral: (above) 1755 inscription above the portal saying that the Diocese of Spalato was a Primatial See (it was in the interior of the church until 1885); (below) inscription celebrating the Austrian restoration of the interior. The inauguration in March 1885 was attended by Crown Prince Rudolph and his wife Stéphanie

On revisiting Spalato in 1885 I found the interior cleared of its encumbrances and once more restored to use, and it was then for the first time possible to judge of the effect on the building. The extensive restoration it has suffered has injured its antique character. (..) The restoration of the interior of the duomo is now happily over, and one knows the worst as regards that part. Its new-fangled splendour is but a poor compensation for the loss of the original work of the fourth century, battered and defaced as it was.
Sir Thomas Graham Jackson - Dalmatia, the Quarnero and Istria - 1887
Sir Thomas Graham Jackson (1835-1924) was one of the leading architects of his time. He visited Spalato in 1885 when the interior of the Cathedral had just been restored and work was about to start on the bell tower. 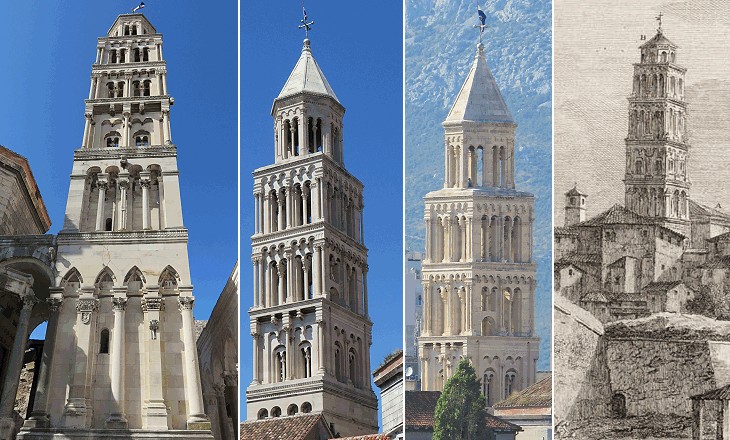 Bell tower seen from different points of view and in an etching by Robert Adam (1728-1792), a Scottish architect and engraver who published "Ruins of the Palace of the Emperor Diocletian at Spalatro in Dalmatia" in 1764

The next monument to be restored is the mediaeval campanile that bestrides the approach to the temple of Jupiter (which after the restoration became known as the Mausoleum of Diocletian). This tower was already encased in massive scaffolding in 1882, which was still standing idle in 1885, no beginning having been made with the restoration. This work is one that needed attention much more urgently than the restoration of the temple; the latter would have stood in its timeworn state to the world's end, and many of us would have been heartily glad if it had never been meddled with; but the tower shows evident signs of impending dissolution, and the sooner it is taken in hand the better. Built without any foundation, and based solely on the old steps and platform in front of the temple of Jupiter, (..) it is evident that the substructure is unfairly loaded, and it is no wonder that signs of crushing have shown themselves in several places. Dangerous symptoms must have begun to appear very soon after the upper part of the tower was completed in the XVth century. (..) The whole tower, whether early or late, including even the lantern stage, bears the stamp of Romanesque work, and has borrowed not a little from the late Roman work of the IIIrd century by which it is surrounded. The upper three stages, which are attributed to the XVth century, are full of antique columns and capitals, and rich in porphyry and verd' antico (ancient green marble). T. G. Jackson
If the British architect had revisited Spalato after the scaffolding was removed he would have come to the conclusion that the glaring new bell tower bore just a vague resemblance to the old one.
Alois Hauser, the Viennese architect in charge of the restoration/reconstruction imitated Eugène Viollet-le-Duc who in France acquired celebrity with his very innovative "restorations" of medieval monuments. 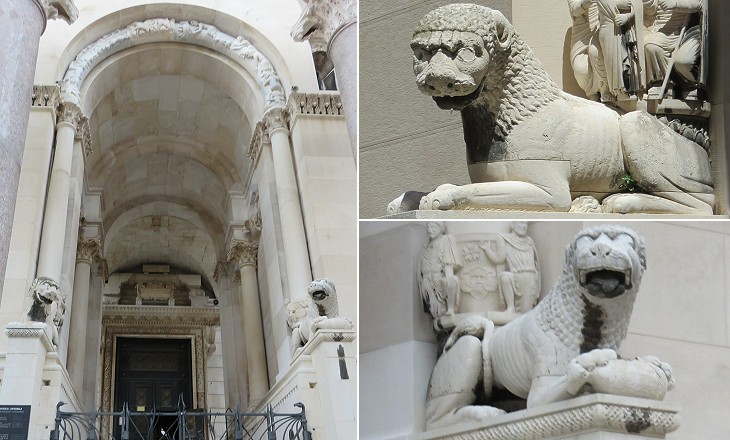 Elements of the XIIIth century entrance attributed to Master Radovan

Master Radovan (Raduanus) is the architect who designed the great portal of the Traù Cathedral, as stated by an inscription in Latin. Some XIIIth century statues which decorated the medieval entrance to the Cathedral of Spalato have been attributed to Master Radovan based on vague similarities.
Mark Twain complained that in Italy works of art were attributed to Michelangelo too often: I do not want Michelangelo for breakfast - for luncheon - for dinner - for tea - for supper - for between meals. I like a change occasionally. M. Twain - The Innocents Abroad - 1869.
Had Twain visited Dalmatia he would have made the same remark about Master Radovan. These doors are in two flaps, each flap containing fourteen panels surrounded by borders of Romanesque knot-work and scrolls, and each panel is carved with a representation of some subject in the life and passion of our Lord. Some of them are much decayed or mutilated, but the greater number are in admirable preservation considering their antiquity and material. Not only their date (1214), but the name of the artist who made them (Andreas Buvina) are known. (..) The whole of the carving was once gilt, and the ground picked out with red, as may be seen from traces still remaining in the upper part of the doors where the lintel has sheltered them from the weather. T. G. Jackson 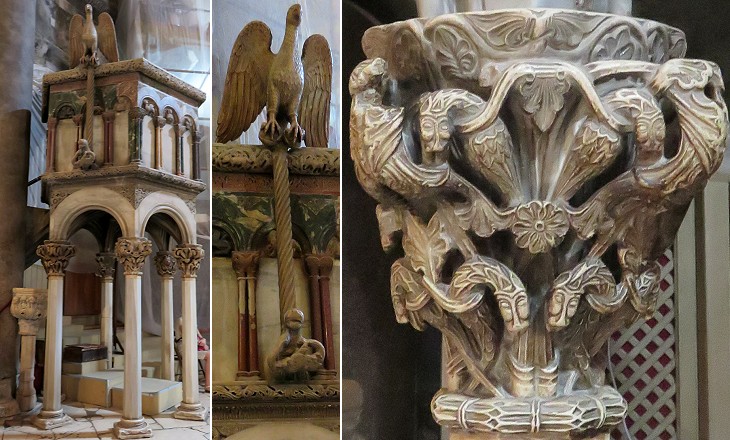 The pulpit is by far the most interesting object under the dome, and may challenge comparison with any similar work of the middle ages. It is made of marbles of various colours and the compact limestone of the country, which is not inferior to marble in beauty and is superior to it as a material for carving. (..) The capitals are carved with the richest fancy of Romanesque art, and consist of an intricate mass of winged beasts and foliage intertwined, elaborately undercut, and detached from the shaft. In point of technical execution and ingenuity of design I know nothing in Romanesque art to surpass them. (..) The body of the pulpit above overhangs by the projection of little columns of porphyry and rich marbles supported on the cornice, and standing in advance of the white marble panels. (..) The book-rest is formed by a well-modelled eagle grasping in each claw a little bird and supported by a spiral colonnette springing from the back of a conventional lion, which projects from the lower cornice and grasps a winged serpent like those in the capitals. T. G. Jackson 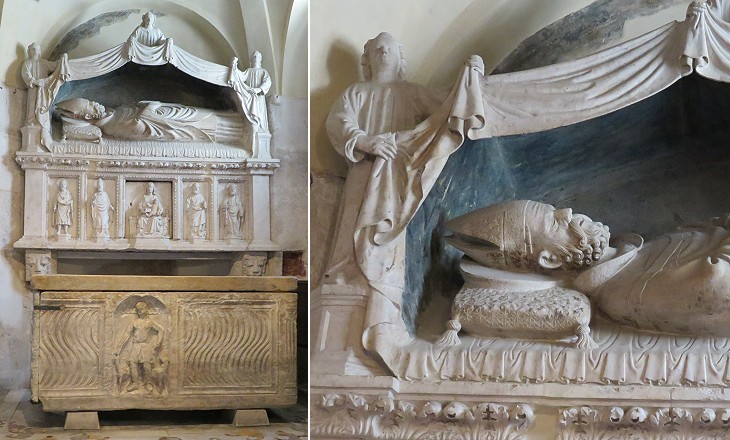 In 1420 Spalato was acquired by the Republic of Venice and the Cathedral was embellished with a chapel dedicated to St. Domnius, patron saint of Spalato. He was a friend of St. Peter and was sent to Dalmatia to preach the Gospel. This explains why the Archbishop of Salona (and later on of Spalato) was granted the title of Primate of Dalmatia, which meant that the other bishops of the region reported to him. This privilege was abolished in 1828. Another St. Domnius was a Bishop of Salona who was put to death in 303 by Emperor Diocletian. Bonino da Milano portrayed this second saint when he built the chapel.
Today the Cathedral, which Graham referred to as the duomo, is known as Sv. Duje (St. Domnius), but the 1885 inscription says it was dedicated to the Assumption of the Virgin Mary. 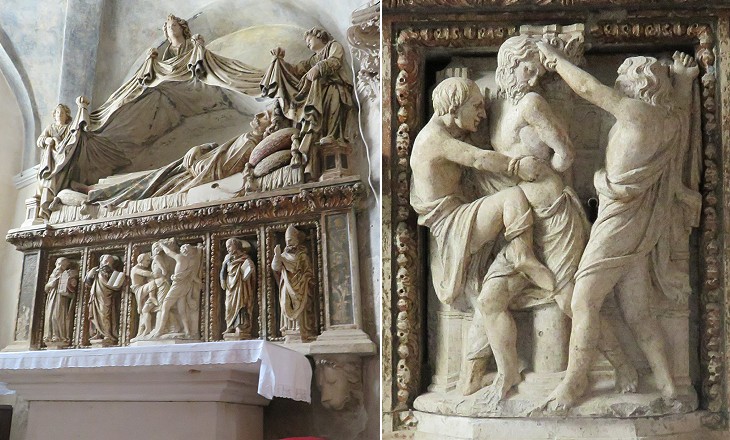 Monument to St. Anastasius by George from Sebenico (aka Giorgio Orsini)

The other chapel, dedicated to S. Anastasio (another martyr of the persecution by Diocletian), was made in 1448 by Giorgio Orsini, who was bound by his contract to make his work match the opposite chapel of S. Doimo. But though the general design corresponds, the carving is very inferior to the work of Bonino, which is excellent, while in Giorgio's work the foliage is cut up and confused, and the figures are wanting in simplicity and ill-modelled. The figure of S. Anastasio under the canopy above can scarcely be seen for want of light, but it seems not without merit. T. G. Jackson
George from Sebenico (thus named because of the Cathedral he designed there) was one of several sculptors from Dalmatia who came to work in Italy (at Ancona). According to tradition the first one was St. Leo, a Christian stone cutter from Arbe in northern Dalmatia, who preached his faith in the Marches in the IVth century. 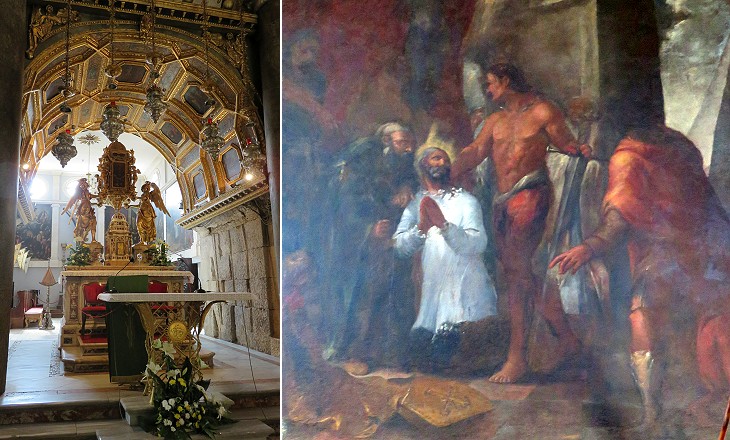 The original recess opposite the entrance-door of the temple has been cut through, and admits to a rectangular choir which has been built further to the east. The construction of this new choir is due to the famous archbishop Marcantonio de Dominis. T. G. Jackson
Marcantonio de Dominis was appointed Archbishop of Spalato in 1602, but he resigned his post in 1616 and left for England where he embraced the Anglican faith. In 1622 however he left England and went to Rome where he relied on the protection of Pope Gregory XV, whom he personally knew. The sudden death of the Pope in 1623 put him in a difficult position and the Inquisition opened an investigation on the sincerity of his return to the Catholic faith. He died in September 1624 and in December he was declared a heretic. His body was burnt at Campo de' Fiori. He wrote books against the Catholic Church (Papatus Romanus) and the Anglican one (Sui Reditus ex Anglia Consilium ). 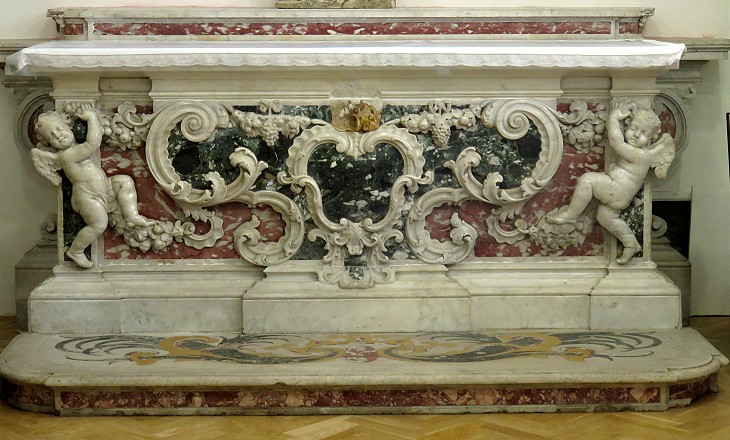 The image used as background for this page shows the gravestone of a knight of the Alberti family.