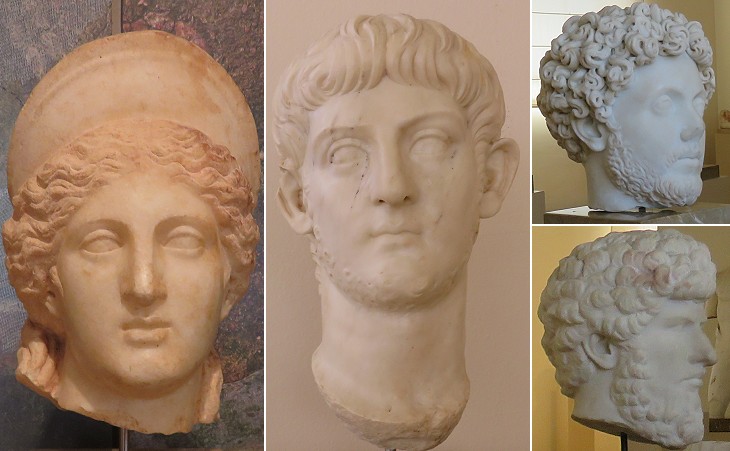 Many remains of antiquity are constantly found at Tarragona, and as constantly either reburied or mutilated; a few fragments of low art (..) are huddled away in the Academia among other "old stones". Ship-loads of antiquities, it is said, were carried off by the English in 1722, and Enrique Florez (Espana Sagrada - xxiv. 2) is grateful to the foreigners for having thus preserved what the "abandono y ignorancia" of his countrymen would have let perish; some of them are at Lord Stanhope's seat, Chevening House.
Richard Ford - A Handbook for Travellers in Spain - 1855
Today the National Archaeological Museum of Tarragona houses a large number of ancient works of art which were found in the town and its environs in the XIXth and XXth centuries. In addition to the museum main location near the Praetorium, other items are on display in a branch at the Christian Necropolis. 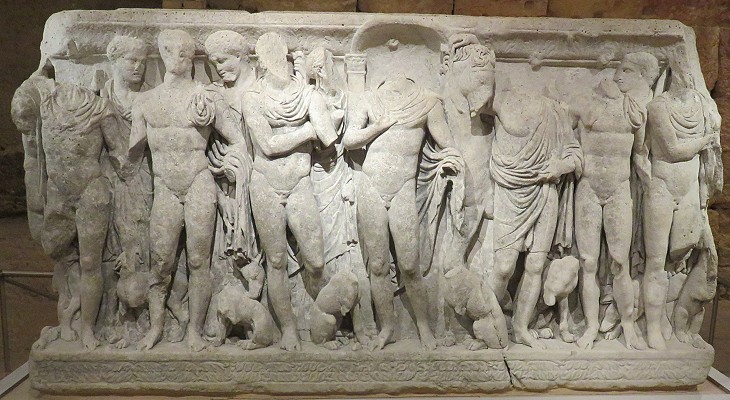 Museu d'Historia de la Ciutat de Tarragona in the interior of the Praetorium: Sarcophagus of Hippolytus

The City of Tarragona has placed some ancient works of art and inscriptions in the Praetorium and in an underground gallery of the Circus. The sarcophagus shown above is the most interesting item of this small collection. J. W. Goethe saw a sarcophagus having a similar relief at Agrigento in Sicily: In the principal church there is an ancient sarcophagus in good preservation. (..) Hippolytus attended by his hunting companions and horses, has just been stopped by Phaedra's nurse, who wishes to deliver him a letter. As in this piece the principal object was to exhibit beautiful youthful forms, the old woman is a mere subordinate personage. (..) Of all the alto-relievos I have ever seen, I do not, I think, remember one more glorious, and at the same time, so well preserved as this. Italian Journey - April 1787 - Translation by Charles Nisbet.
The sarcophagus of Tarragona is dated IInd century AD, a period of great wealth for the Roman Empire during which marble artefacts such as sarcophagi were made in Italy, Greece and today's Turkey and then shipped to the other regions of the Empire (see a page on this trade). 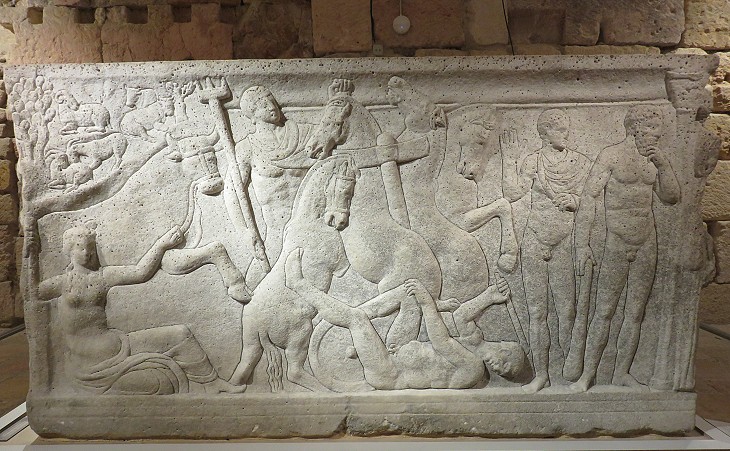 The use of different relief levels in the front and the back of the sarcophagus is due to the fact that it was made without knowing where it would have been placed. In a family mausoleum, as one can see in the Necropolis of Porto, sarcophagi were placed in an arcosolium, a niche in the wall and only their front was visible. The back was sculptured in low relief in order not to occupy space. However a sarcophagus which was bought for the founder of the mausoleum or for a very important member of the family might have been placed at the centre of the room and thus also its back needed being decorated.
The myth of Hippolytus was very popular and he and his hunting companions were portrayed in many sarcophagi, e.g. at Tripoli, Arles and Capua. The death of Hippolytus however was not often depicted. Hippolytus, son of Theseus, was unjustly charged with having raped Phaedra, his stepmother. Theseus cursed him and asked Poseidon, god of the horses, for help and on that same day ... I headed my chariot towards Troezen, Pittheus's city, and was travelling the Isthmus, near Corinth, when the sea rose, and a huge mass of water shaped itself into a mountain, and seemed to grow, and give out bellowings, splitting at the summit: from it, a horned bull, emerged, out of the bursting waters, standing up to his chest in the gentle breeze, expelling quantities of seawater from his nostrils and gaping mouth. My companions' hearts were troubled, but my mind stayed unshaken, preoccupied with thoughts of exile, when my fiery horses turned their necks towards the sea, and trembled, with ears pricked, disturbed by fear of the monster, and dragged the chariot, headlong, down the steep cliff. I struggled, in vain, to control them with the foam-flecked reins, and leaning backwards, strained at the resistant thongs. Even then, the horses' madness would not have exhausted my strength, if a wheel had not broken, and been wrenched off, as the axle hub, round which it revolves, struck a tree. I was thrown from the chariot, and, my body entangled in the reins, my sinews caught by the tree, you might have seen my living entrails dragged along, my limbs partly torn away, partly held fast, my bones snapped with a loud crack, and my weary spirit expiring: no part of my body recognisable: but all one wound.
Ovid - Metamorphoses - Book XV - Translation by A. S. Kline. 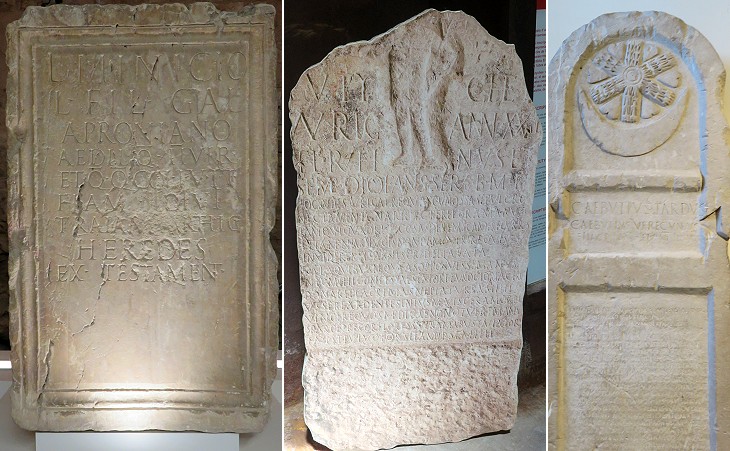 Corpus Inscriptionum Latinarum (CIL), the systematic recording of all Latin inscriptions was initiated in 1853 by the Berlin-Brandenburg Academy of Sciences and Humanities to provide historians and archaeologists with a tool to compare and study the growing number of inscriptions which were brought to light by excavation campaigns. Inscriptions provide interesting insights into the life of the people during the Roman Empire. Their formal execution is also a sign of growth or decadence (see a page showing some of the most interesting ancient inscriptions in Rome).
Two main types of inscriptions are housed in the museums of Tarragona: those on pedestals of statues and those on gravestones. Lucius Minucius Apronianus was a flamen, i.e. the magistrate/priest in charge of the ceremonies celebrating the deified emperors, at the time of Trajan. The inscription indicates the official name of Tarragona in that period: COL(oniae) I(uliae) U(rbis) T(riumphalis) T(arraconensi) (which is written in a modern plan of the ancient town).
Charioteers in the circus could acquire enormous fame and wealth: Publius Aelius Gutta Calpurnianus, a charioteer of Rome earned enough money to erect an expensive funerary monument to himself; other charioteers were celebrated in mosaics at Merida and Girona. Young Eutyches, a slave, did not achieve the same fame. He died of intestinal fever at the age of 22 when he was still learning to drive a quadriga, a chariot drawn by four horses. Nec mihi concessa est morituro gloria circi "I was not allowed to die with the glory (of having won) in the circus" is a verse of the short poem on his gravestone. The text, apart from its artistic value for which it is mentioned in many anthologies of Latin poetry, is interesting because it indicates the existence of a training ladder for the charioteers.
Caius Aebutius Verecundus was a legionary aged nineteen when he died in Syria. The cenotaph inscription includes a poem in which his parents express their grief because they were not able to assist him in his last hours. The symbol of the Moon brings to mind gravestones in Algeria and it probably has a remote association with the Carthaginian cult of Tanit. 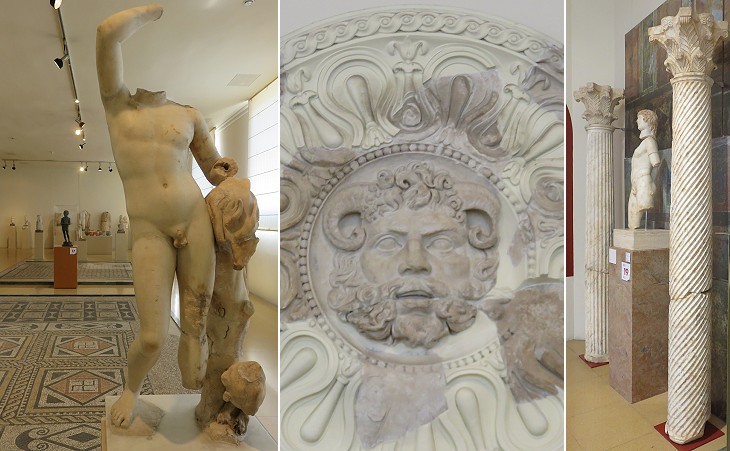 National Archaeological Museum of Tarragona: (left) Dionysus/Bacchus (IInd century AD) ; (centre) relief portraying Jupiter Ammon similar to those at Foro di Traiano and Merida; (right) marble columns and a statue from Villa dels Munts; see other statues which were found in the theatre

In the eastern provinces of the Roman Empire it often occurs to come across works of art or monuments in which the Greek/Roman models are mixed with elements of local cultures (e.g. in the statues at Nemrut Dagi or in the Temple of Bel at Palmyra). In the western provinces where local traditions were less rooted the upper classes decorated their monuments and houses very much in line with Greek/Roman patterns. 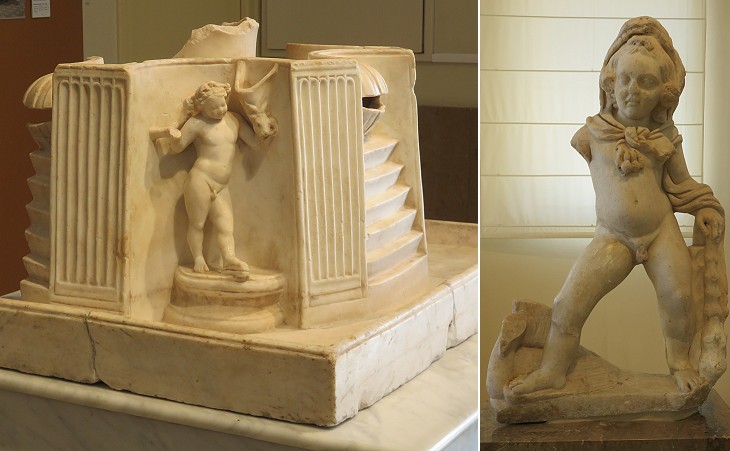 National Archaeological Museum of Tarragona: (left) domestic fountain (IInd century AD); (right) statue of Infant Hercules strangling a goose, a symbol of Juno, which was found at Collegium Fabrum, the seat of the corporation of building workers of Tarragona (marble from Paros)

Augustus in summer slept with the doors of his bedroom open, oftentimes in the open court near a fountain.
Suetonius - The Lives of the Twelve Caesars - Loeb Classical Library.
It is likely that Augustus' fountain was a small one and that the water did not make a disturbing noise, but flowed gently out of it. It might have been very similar to that shown above, the elaborate work of art of a talented sculptor (a simpler model can be seen at Ostia and a catalogue of Roman garden fountains can be seen on the walls of Villa di Poppea near Pompeii).
Infant Hercules was usually portrayed while strangling the serpents Juno sent to kill him (see a relief at Palazzo Massimo and a mosaic in Syria) 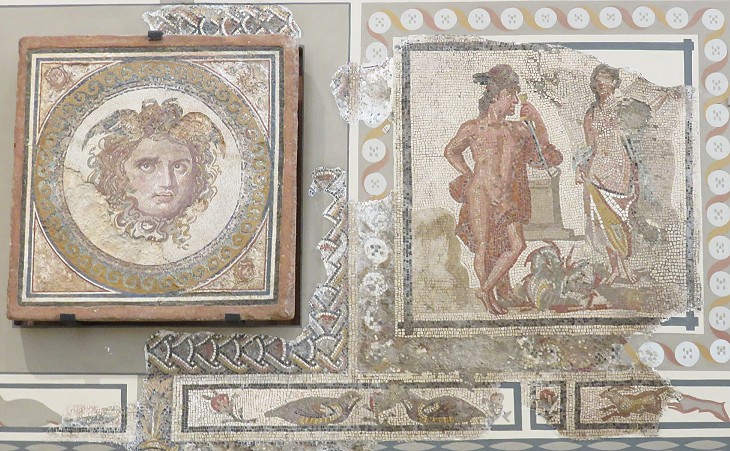 This large floor mosaic was found in 1845; it is mainly a geometrical one but it had some emblemata, small sections portraying figures; only two of them remain and both are linked to the myth of Perseus; the image of Medusa is very finely executed whereas that showing Perseus with Andromeda is ordinary. It could be that the former was made by a more skilled craftsman at a later time to replace a damaged part of the mosaic. The Gorgons, i.e. Medusa and her two sisters, were often portrayed in mosaics (Cordoba), sarcophagi (Antalya) and monuments (Leptis Magna) because they had the power of turning away evil influences. 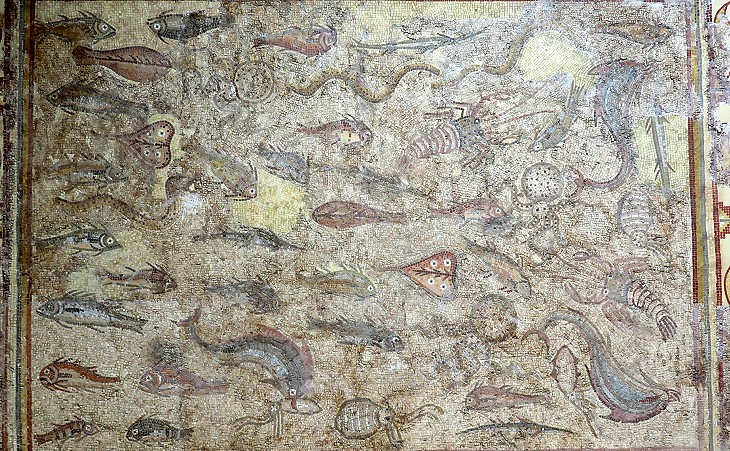 National Archaeological Museum of Tarragona: Mosaic of the Fish (IIIrd century AD); the image used as background for this page shows a detail of a similar mosaic

In this mosaic 47 sea creatures are depicted. They are all real, i.e. there are no tritons or other fantastic animals. This subject was very popular throughout the Roman Empire (e.g. at Antioch), but this specific mosaic is regarded as an example of the influence of the school of mosaicists of the Province of Africa, with which Tarragona had trade links, as documented by similar mosaics at the Museum of Bardo in Tunis, at Neapolis (Nabeul) and at the Museum of Tripoli. A fresco depicting Oceanus and some sea creatures was found at Villa dels Munts. 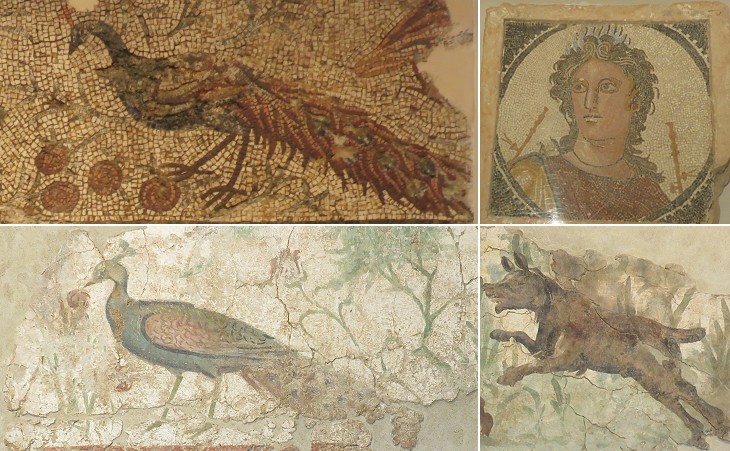 National Archaeological Museum of Tarragona: mosaics (above) and frescoes (below) portraying animals and Euterpe, the Muse presiding over music (this mosaic was found at Villa dels Munts while the other exhibits were found at Tarragona)

The first studies on Roman painting were based on the frescoes which had survived at Herculaneum, Pompeii and some nearby villas owing to extraordinary circumstances. Over time careful archaeological excavations have allowed the recovery of many other Roman paintings, either in situ or reconstructed inside museums. Roman mosaics fared much better in withstanding the ravages of time owing to the very good technical methods which were employed for making the floors upon which the mosaics were placed. This can be noticed also at the Museum of Tarragona where the collection of ancient paintings is rather limited when compared to that of mosaics. 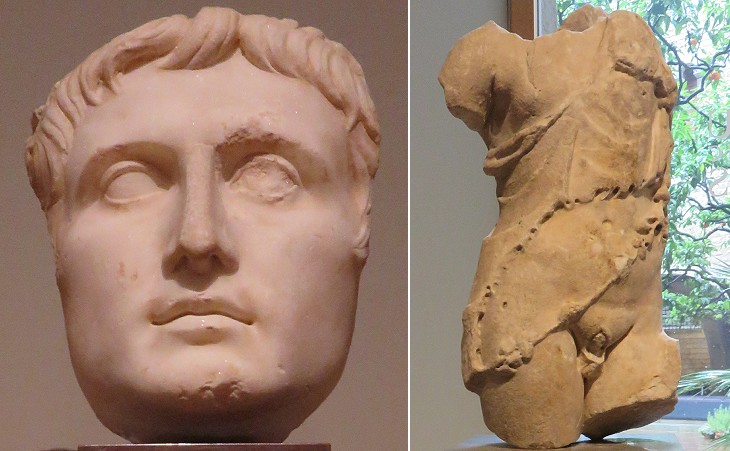 Move to Introduction and Walls and Fora, Main Monuments, Early Christian Tarragona or The Environs of Tarragona.