- Tivoli - part one: the Roman town

According to Virgil, Tibur (today's Tivoli) was one of the five most important towns of Latium prior to the foundation of Rome in 753 BC.

The town, according to Virgil, was named after Tiburtus, the elder son of Catillus the Elder, the leader of a group of Greek settlers who was the actual founder of the town. Coras, another son of Catillus, gave his name to Cori. 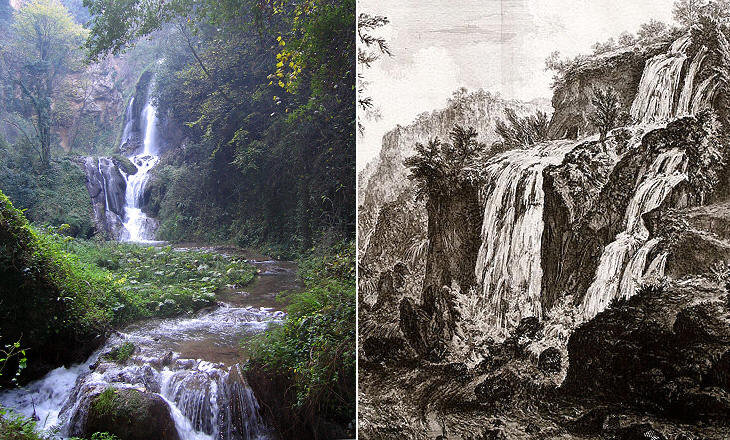 We went to see the so famous natural precipice and cascade of the river Anio, rushing down from the mountains of Tivoli with that fury that, what with the mist it perpetually casts up by the breaking of the water against the rocks, and what with the sun shining on it and forming a natural Iris, and the prodigious depth of the gulf below, it is enough to astonish one that looks on it.
John Evelyn's Diary and Correspondence - 1645
To Mr. West. Rome, May 20, 1740. Dame Nature (..) has built here three or four little mountains, and laid them out in an irregular semicircle; from certain others behind, at a greater distance, she has drawn a canal, into which she has put a little river of hers, called Anio; she has cut a huge clift between the two innermost of her four hills, and there she has left it to its own disposal; which she has no sooner done, but, like a heedless chit, it tumbles headlong down a declivity fifty feet perpendicular, breaks itself all to shatters, and is converted into a shower of rain, where the sun forms many a bow, red, green, blue, and yellow. To get out of our metaphors without any further trouble, it is the most noble sight in the world. The weight of that quantity of waters, and the force they fall with, have worn the rocks they throw themselves among into a thousand irregular crags, and to a vast depth. (..) You have at one view all these cascades intermixed with groves of olive and little woods, the mountains rising behind them, and on the top of one (that which forms the extremity of one of the half-circle's horns) is seated the town itself.
Thomas Gray - Letters from France and Italy in 1739-1741
Historians believe that the name of the town meant either "by the hill", because Tivoli is situated on a hill commanding a view over the Roman countryside, or "by the water" because the town is near a series of waterfalls made by the Aniene River, which empties into the Tiber near Ponte Salaro. 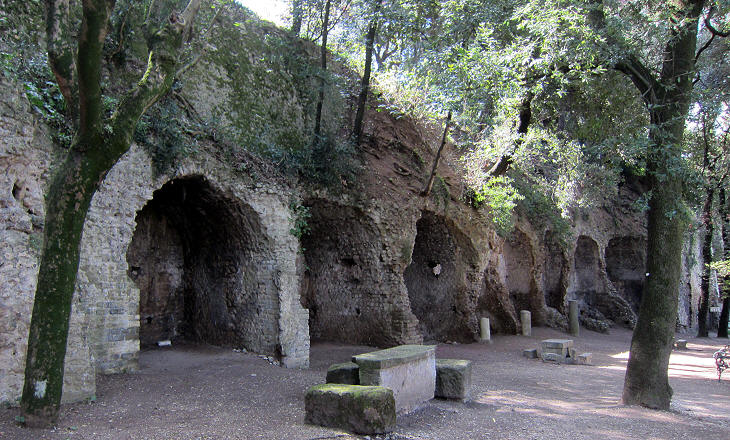 On arriving at Tivoli we hired a Cicerone and asses for the picturesque tour of the hills. First appeared the villa of Vopiscus, which stands only on one bank of the Anio, and at the verge of the great cascade, in a situation so noisy, so rugged, so rocky, in every point so opposite to Statius's description of its quiet location, that no lapse of time, or change in the river could well reconcile them.
Joseph Forsyth - Remarks on Antiquities, Arts, and Letters in Italy in 1802-1803
Tibur fought against Rome, but eventually accepted peace conditions by which it retained a certain degree of self-administration. In 45 BC Julius Caesar granted full Roman citizenship to its inhabitants. It was the beginning of a prosperous period for the town during which many wealthy Romans spent the summer at Tibur and eventually Emperor Hadrian built a large villa three miles from the town. 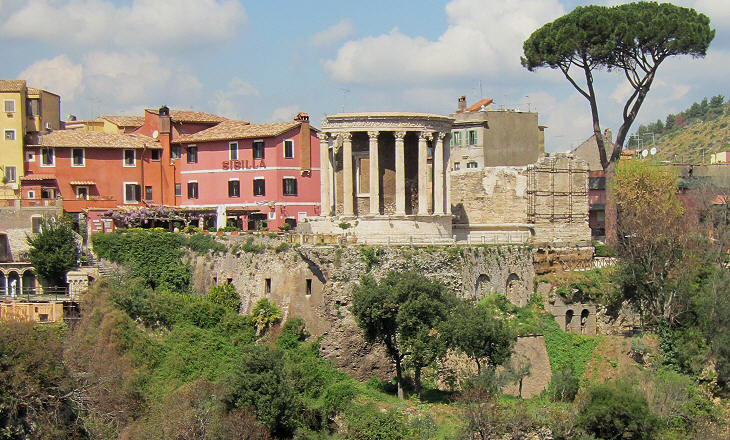 The acropolis of ancient Tibur

On the brink of the precipice, stands the Sibyls' temple, the remains of a little rotunda, surrounded with its portico, above half of whose beautiful Corinthian pillars are still standing and entire. Gray
On returning to the Sibilla-Inn we found tourists like ourselves, on asses like our own, caricatured on the walls by English draughtsmen. Forsyth
The acropolis of ancient Tibur was located on an isolated rock opposite the waterfalls and in the Ist century AD the site was chosen for building two temples right on the edge of the precipice. During the late XVIIIth century Grand Tour travellers could not miss an excursion to Tivoli to see the ruins of these temples. They often commissioned their own portraits with the temples in the background. 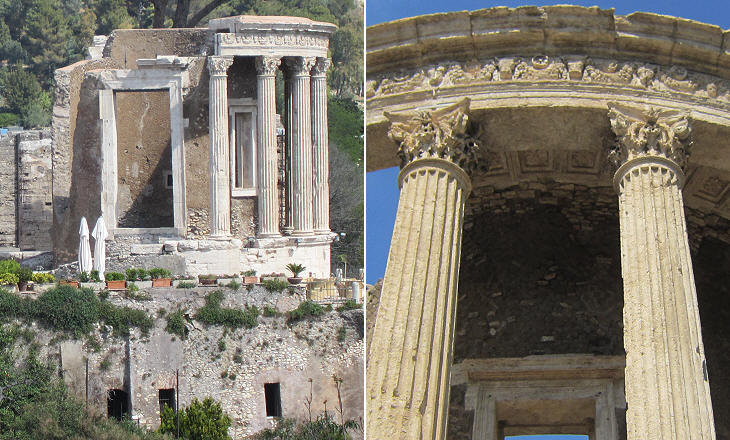 The ten surviving Corinthian columns of Tempio di Vesta are very fine and on top of them there is a nice frieze with festoons and bucrania. The dedication to Vesta, the Roman goddess of family and sacred fire, is not supported by evidence. The dedication was based on the fact that the Temple to Vesta in the Roman Forum was round (on the same grounds a temple near the Tiber was believed to be dedicated to Vesta). The temple at Tivoli was turned into S. Maria della Rotonda, a church having the same name of the Pantheon in Rome, another round temple. 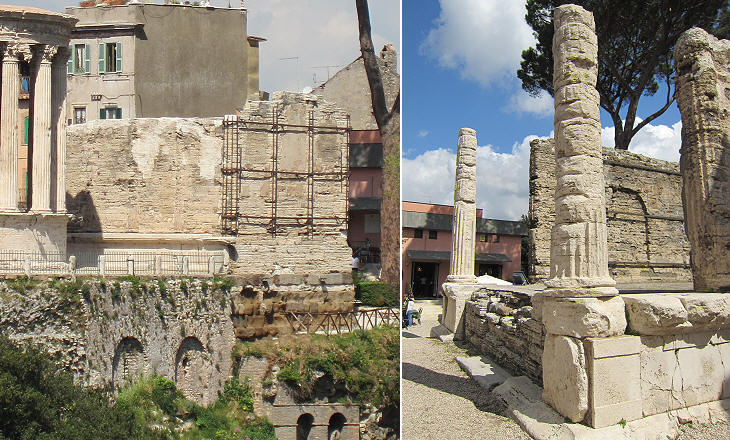 Tempio della Sibilla and Tempio di Vesta form a complex similar to that of Tempio di Portuno and Tempio di Vesta near the Tiber. The dedication to Sibilla Tiburtina is not supported by evidence. There are few references to a Tiburtine Sibyl (seeress) in Classical authors, but during the Late Empire Christian writers claimed that the Tiburtine Sibyl prophesied the birth of Jesus Christ to Emperor Augustus. Another prophecy by this Sibyl, which is reported in medieval documents, describes the advent of a Final Emperor. It is very popular among those who build upon apocalyptic texts to support their religious beliefs. The temple at Tivoli was a church dedicated to St. George until 1884, when the ancient structures were freed from medieval additions. 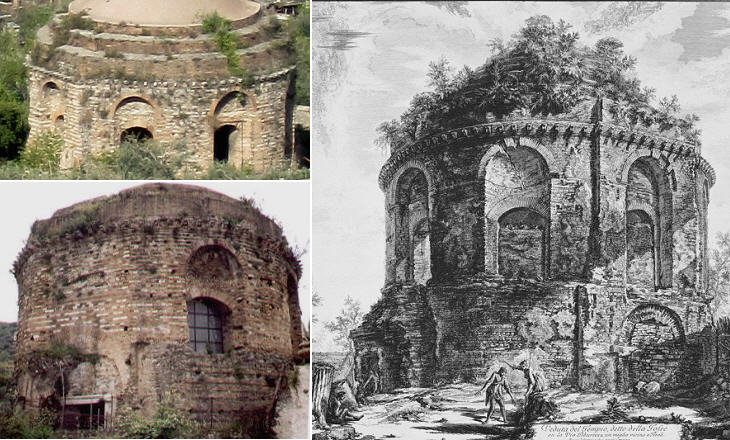 (left) Tempio della Tosse (Cough) seen from Villa d'Este (above) and from the old road to Rome (below); (right) etching by G. B. Piranesi

The traditional name of another round temple here has conjured up an unheard-of goddess, and a strange one she is - Cough. Forsyth
Tempio della Tosse, most likely a Roman tomb, is located outside Porta del Colle near the ruins of a Roman villa which belonged to Maecenas, a friend of Emperor Augustus. The reference to Tosse is not fully explained. It was used as a church, but in the XVIIIth century it was abandoned and Piranesi, who had a penchant for picturesque ruins, depicted it in one of his etchings. The building still exists and it seems to be kept in the same poor state it was in the XVIIIth century.
Giuseppe Vasi and Piranesi printed and sold their views of Rome in the same period, but they catered for slightly different customers. Vasi started first and with some approximation we can say he targeted a Roman Catholic customer with a large number of views dedicated to churches, monasteries and other religious buildings; besides the text accompanying his prints provided a lot of information about religious orders, lives of the martyrs, parishes, etc..
Piranesi targeted foreign travellers and many of his views were dedicated to monuments of Ancient Rome: he was particularly fond of Tivoli. The image used as a background of this page shows a detail of Tempio di Vesta in one of his etchings. 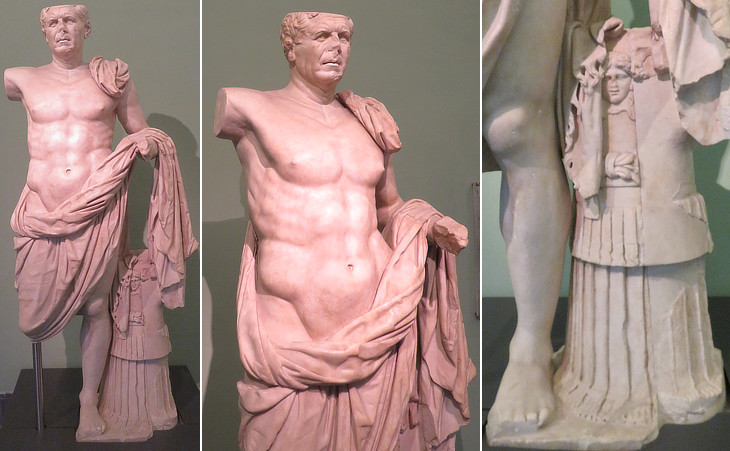 Museo Nazionale Romano: Ist century BC statue of a military commander (aka Generale di Tivoli) which was found in 1925 on the site of a shrine to Hercules outside the city walls

The statue has a veristic Roman head and an idealized Greek body. To show the military rank of the man a lorica (armour) is depicted at his side. Emperor Hadrian was often portrayed in this way, e.g. at Pergamum. 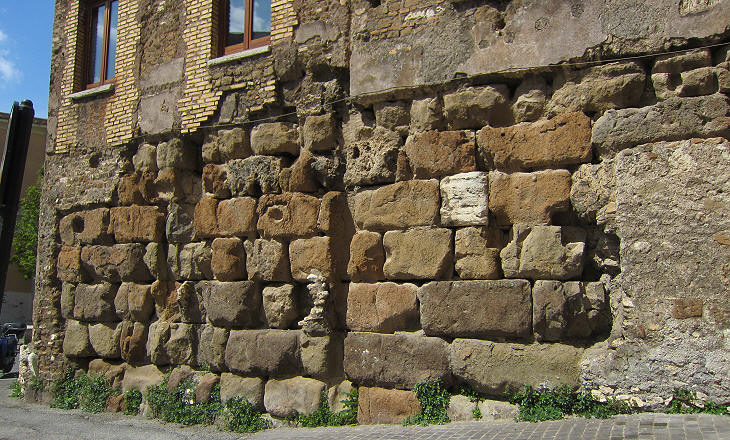 Ancient walls (IVth century BC) near the Town Hall

Our guide was a local Latinist. Before he installed himself a Cicerone, he had been employed by landscape-painters to carry their implements round the hill. From them he had picked up the best remarks on its scenery, he stopped us at the finest points of view, he lectured, he grinned with admiration, he amused us and was happy. Forsyth
During the Roman period Tivoli did not need walls, but in the Vth century AD when the Visigoths and the Vandals plundered Rome, the inhabitants of Tivoli restored the pre-Roman walls which protected the southern and western sides of the town (the other two had natural defences). A section of these walls is visible near the XIXth century Town Hall of Tivoli. Their construction technique is similar to that of the Mura Serviane, the Republican walls of Rome. 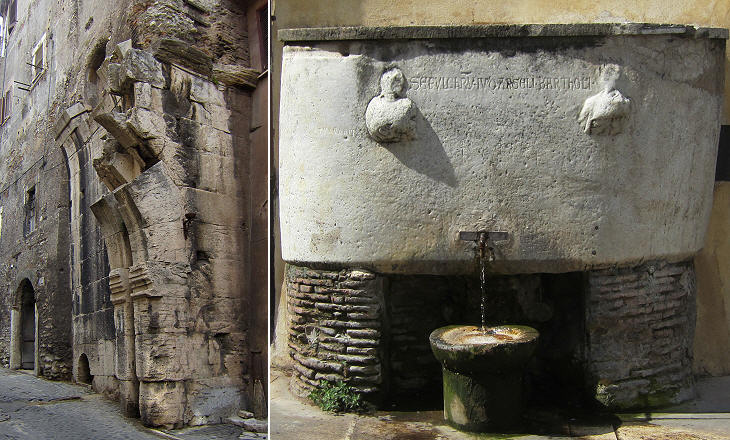 The entrance to the ancient town was marked by an imposing gate, built with travertine, the stone which was quarried near Tivoli and which was shipped to Rome via barges from Ponte Lucano. The gate is similar to the inner gate of Porta Tiburtina, the gate of Rome from which the road to Tivoli started.
Tivoli shows many examples of reuse of ancient Roman materials. A sarcophagus with the busts of a couple was reused by a wealthy XIIIth century inhabitant of Tivoli for his tomb in the cathedral. In the XVIIth century it was moved to a nearby square where it became part of a small public fountain (a very common end for ancient sarcophagi). 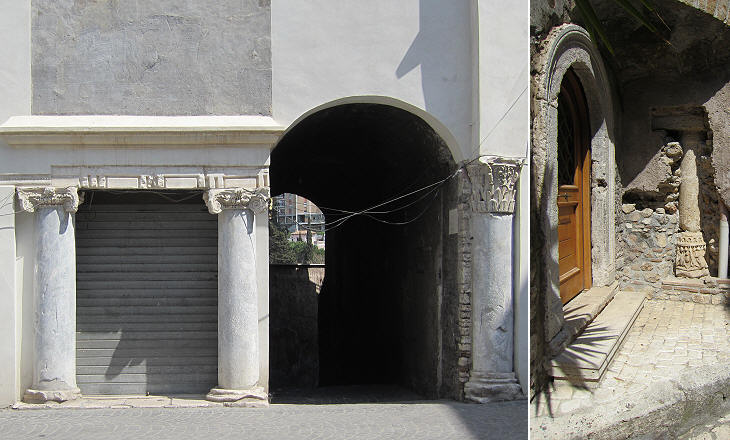 Columns and capitals taken from ancient buildings can be seen at several locations in Tivoli. In most cases the diameter-to-height ratio of the columns was modified to fit the needs of the new buildings. In general the columns had a decorative purpose; in some instances, such as at Piazza Palatina, they indicated that the palace had asylum rights, i.e. the guards could not arrest people inside the building. In other cases columns and capitals were used as construction material and their presence was discovered by chance. 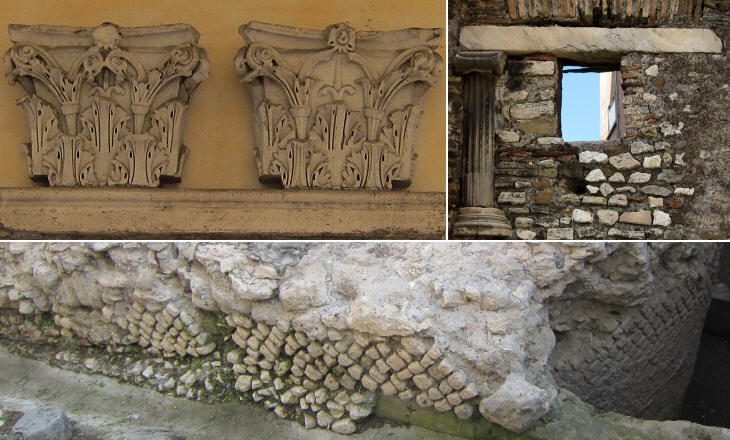 (above-left) Roman capitals walled in the porch of the Cathedral; (above-right) Roman materials in a medieval house; (below) Roman buildings near the Cathedral

The original standards of weights and measures were kept in the Temple of Jupiter on the Capitol, and used only on extraordinary occasions. Official duplicates were deposited in other temples (..) and kept at the disposal of the public, whence their name of "pondera publica". Barracks and market-places were also furnished with them. The most important discovery connected with this branch of Roman administration was made at Tivoli in 1883, when three "mensae ponderariae", were found in the portico or peribolos of the Temple of Hercules, adjoining the cathedral of S. Lorenzo.
Rodolfo Lanciani - Pagan and Christian Rome - 1893
In 1883 chance excavations near the Cathedral led to the identification of two Roman buildings: a temple to Augustus and a Mensa Ponderaria, the office where official measurement standards were kept. This has led archaeologists to believe that the XVIIth century Cathedral and the nearby medieval buildings stand on the site of the ancient Forum of the town. 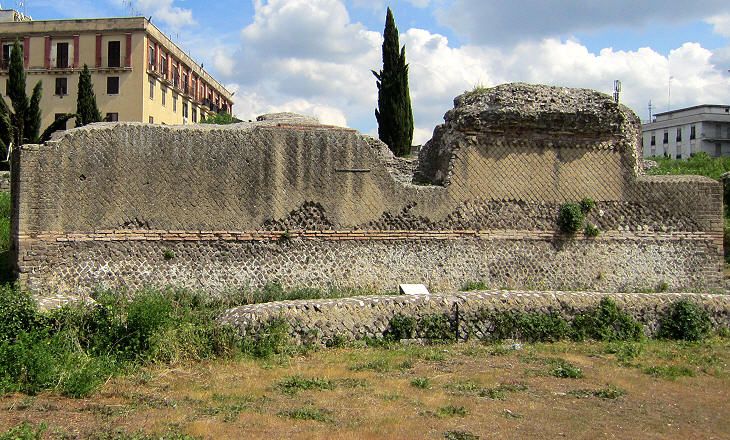 In 1948 the opening of a modern road near Rocca Pia, the Renaissance fortress of Tivoli, led to unearthing the ruins of an ancient amphitheatre dated IInd century AD. Inscriptions found at the site indicated the names of two donors: M. Tullius Blesus who paid for the inauguration ceremony and M. Lurius Lucretianus who paid for a venatio (slaying of beasts) and twenty gladiatorial fights (you may wish to see a mosaic found at Leptis Magna showing venationes and gladiatorial fights).