Among these mountaines in the Village Tivoli, the deceased Cardinall Hipolito of Este, built a Pallace and a wonderfull garden, which being ten mile distant from the City of Rome, the passengers for the most part having seene Rome, did in the Cardinals time, and yet many times doe passe that way. For it resembles a terrestriall Paradice, by reason of the fountaines, statues, caves, groves, fishponds, cages of birds, Nightingales flying loose in the groves, and the most pleasant prospect.
Fynes Moryson - An Itinerary: Containing His Ten Years Travel Through .. Italy (in 1594) 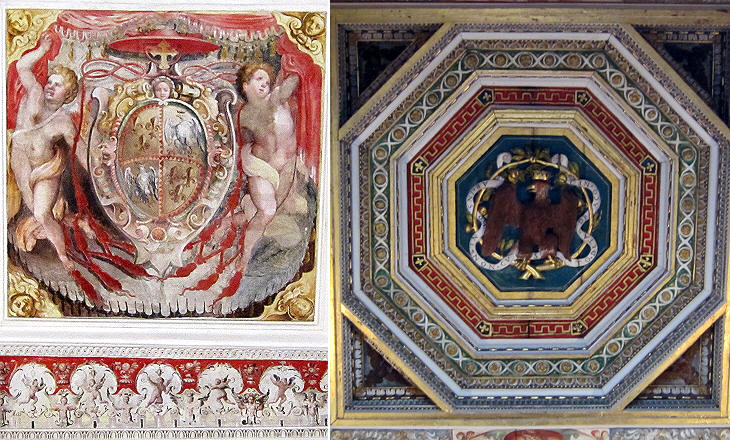 Ceilings of Villa d'Este: (left) coat of arms of Cardinal Ippolito II d'Este; (right) the eagle of the Este in a wreath with golden apples and the motto "Ab insomni non custodita dracone" (not guarded by the sleepless dragon) (from Ovid, Metamorphoses IX, v. 190)

Cardinal Ippolito II d'Este was born in 1509. His parents were Alfonso I d'Este, Duke of Ferrara, Modena and Reggio and Lucrezia Borgia, daughter of Pope Alexander VI and Vannozza Cattanei; as he was a cadet he followed the steps of his uncle Cardinal Ippolito I. His ecclesiastical career was supported by King Francis I of France, whose sister Renèe had married Ercole II, Duke of Ferrara, Ippolito's elder brother.
Ippolito spent many years at the French court and in 1539 he was created cardinal by Pope Paul III at the request of Francis I. He continued to live in France until Pope Julius III appointed him governor of Tivoli. The Este were imbibed with the spirit of the Renaissance. Their court at Ferrara attracted poets and artists. They were fascinated by the Classical World and its myths. In 1431 Niccolo III d'Este named his elder son Ercole and Ercole became a recurring name in the family. The Labours of Hercules were celebrated in the decoration of the family's palaces. In particular the Este were fond of the Eleventh Labour in which Hercules stole golden apples from the garden of the Hesperides, which was guarded by a sleepless dragon. 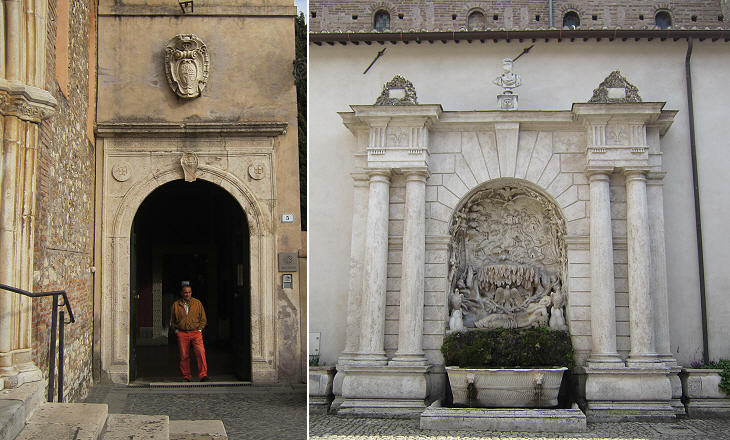 (left) Entrance from Tivoli (to the left the portal of S. Maria Maggiore, the Franciscan church of Tivoli); (right) fountain in the courtyard

Cardinal Ippolito was an ambitious man and during the long conclave which led to the election of Pope Julius III, he vainly manoeuvred to be elected. The new pope named him governor of Tivoli, an office which granted him substantial revenues, to soothe his disappointment and acquire his loyalty. Pope Julius III started to build Villa Giulia, an elegant mansion outside Porta del Popolo. Cardinal Ippolito decided to follow the Pope's example and with the powers he had as governor of Tivoli he expropriated a Franciscan monastery to build there his own villa, the gardens of which should have been a new Garden of the Hesperides. 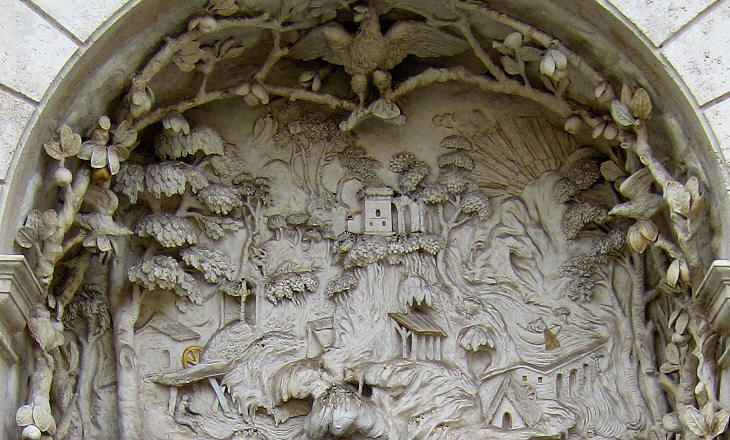 Detail of the fountain in the courtyard: the heraldic symbols of the cardinal (a white eagle and branches bearing golden apples) frame a symbolic representation of Tivoli

Arrived at Tivoli, we went first to see the Palace d'Este, erected on a plain, but where was formerly an hill. The Palace is very ample and stately.
John Evelyn's Diary and Correspondence - 1645
Ippolito, the cardinal's name, was not a reference to the Christian martyr, but to Hippolytus, son of Theseus, who rejected the advances of Phaedra, his stepmother. During the Renaissance he was seen as a symbol of self-restraint because he was able to control his passions. For this reason the Este gave this name to their sons whom they expected to embrace an ecclesiastical career, whereas Ercole was reserved to the heir of the Duchy. 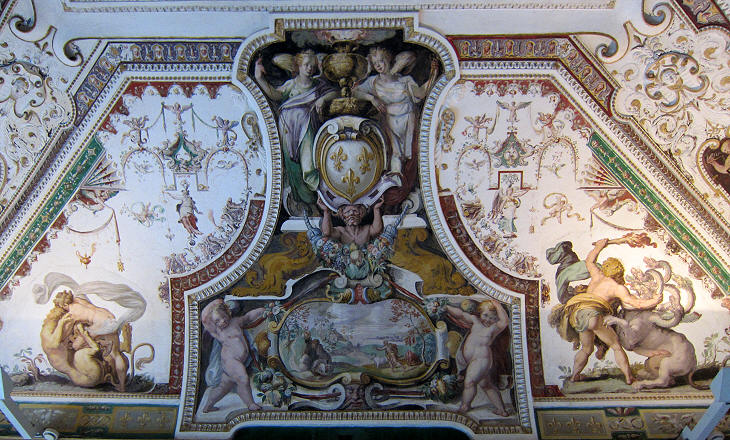 Pirro Ligorio, a scholar of antiquities and the architect of Villa d'Este, linked the myth of Hippolytus with that of Hercules and he wrote that the latter managed to control anger, greed and lust by using philosophy (represented by his club). In particular the killing of the sleepless dragon symbolized his victory over lust. The Este were not alone in their admiration for Hercules. Cardinal Alessandro Farnese iuniore decorated a large room of his villa at Caprarola with events of Hercules' life. The construction of this villa started in 1559 when Cardinal Ippolito was in the process of completing Villa d'Este and it is interesting to compare the two palaces and their gardens. Federico Zuccari worked at the decoration of both palaces. 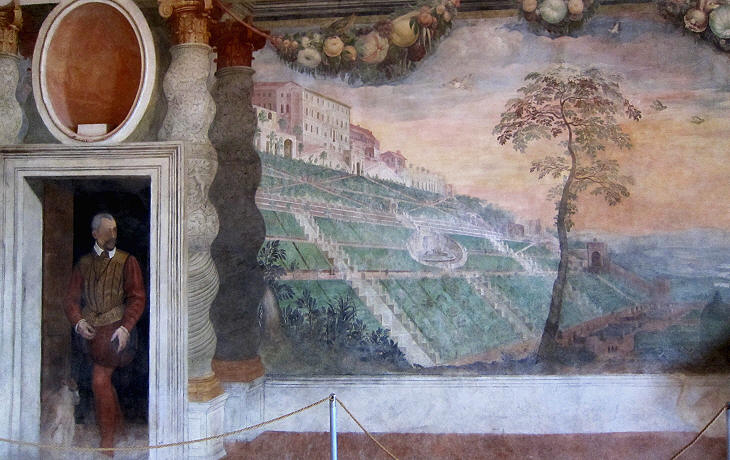 The Villa of Cardinal d'Este stands high and overlooks the Campania of Rome. But the Gardens of this Villa, is that which is here most looked after. They lie upon the side of an Hill, and are placed in four rows of Gardens, with four degrees in the descent, all furnished with Cascatas, Grottas, and other admirable Water-works: the water is let in hither from the River Anio, which runs behind this Hill. For they have tapt the very Hill, and bored the Rock quite through to the River; so that the Gardiner hereby turning a great Cock, can let in as much water as fills the Fountains, the Cascatas, the Grottas and the other rare Water-works.
Richard Lassels' The Voyage of Italy, or a Compleat Journey through Italy in ca 1668
Villa d'Este was designed by Pirro Ligorio, who had a reputation for his knowledge of Ancient Rome, but who did not have much experience as an architect or an engineer when Cardinal Ippolito commissioned him his villa. The task he was given was very difficult because the slope of the hill where the gardens were to be located was very steep and the space for the construction of the palace was rather limited. Ligorio and his assistants Giacomo della Porta and Claude Venard circumvented these obstacles successfully and Villa d'Este became a model for the future villas of popes and cardinals.
In 1558 Ligorio was commissioned the construction of Casino di Papa Pio IV, the decoration of which is another example of his erudition. 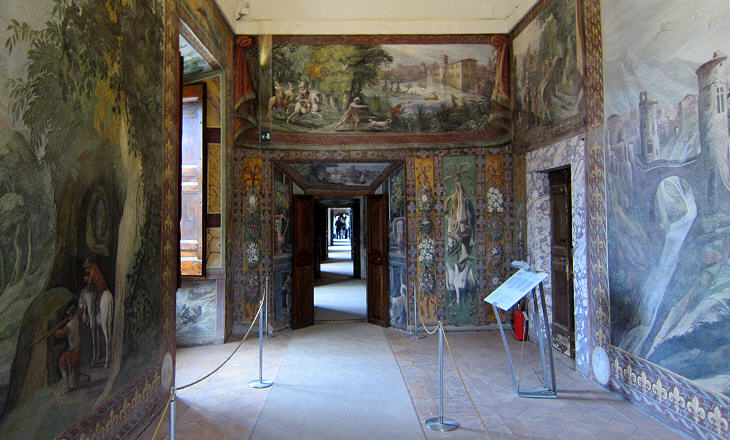 The gardens were the core of the villa and the palace was just a theatrical wing at their end. It is a rather long and narrow building; the upper storey (Appartamento Nobile) is at the level of S. Maria Maggiore and the lower storey (Appartamento Vecchio) was cut into the hill and thus it receives light only from the side of the gardens. The two apartments consist of a long series of communicating rooms with doors aligned along an axis (stanze a cannochiale "telescoped" rooms). Some of the paintings on the walls have been lost whereas almost all the ceilings retain their original decoration. 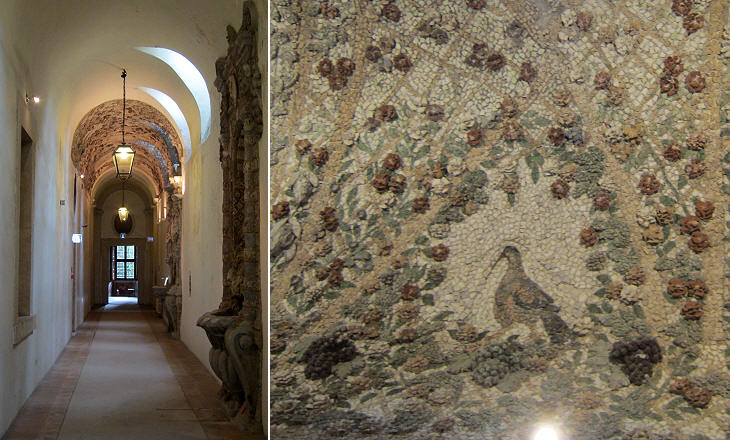 (left) Fountains in Appartamento Vecchio; (right) detail of the ceiling

There are besides in the palace many rare statues and pictures, bedsteads richly inlaid, and sundry other precious moveables: the whole is said to have cost the best part of a million. Evelyn
Cardinal Ippolito rented the Orsini palace at Monte Giordano, but he stayed at Villa d'Este most of the year and Ligorio designed a series of fountains inside the palace for the wet days. They are aligned along a corridor behind the communicating rooms which receives light from the main courtyard. The decoration of the fountains and of the ceiling of the corridor was partly based on that of the ruins of Villa Adriana, which was built by Emperor Hadrian three miles from Tivoli, which were studied and described by Ligorio. 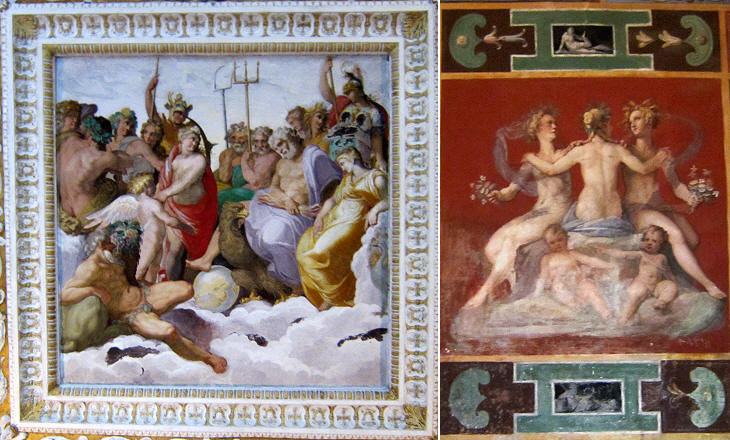 Paintings with mythological subjects: (left) The Olympian Gods; (right) The Three Graces; (in the image used as background for this page: Neptune's chariot)

Cardinal Ippolito had high hopes of becoming pope, but although he attended six conclaves he never made it. He did not understand the changes brought about by the Reformation and the related reaction of the Roman Catholic Church. His expensive lifestyle at Villa d'Este and the almost pagan decoration of the palace attracted negative criticisms from several popes and in particular from Pope Paul IV and Pope Pius V. He was charged with simony by the latter for having attempted to bribe some cardinals at the 1565 conclave. Ippolito kneeled in front of the Pope and kissed his foot as an act of submission, but Pius V continued to regard him as a simoniac. 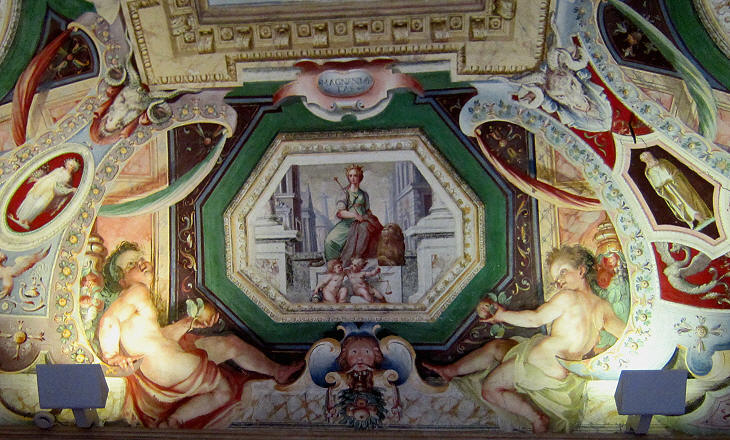 Ceiling portraying the Virtues: the motif of children playing with heraldic symbols shows up in the decoration of later buildings such as the apartment of Cardinal Ferdinando de' Medici in Palazzo di Firenze

Eventually Cardinal Ippolito ran short of money and had to ask his nephew Duke Alfonso II to help him. His relations with the French court weakened and his nephew Cardinal Luigi, whom he had helped to become cardinal, was only interested in inheriting his possessions. Ippolito concentrated his efforts on the completion of Villa d'Este where he passed away in December 1572. 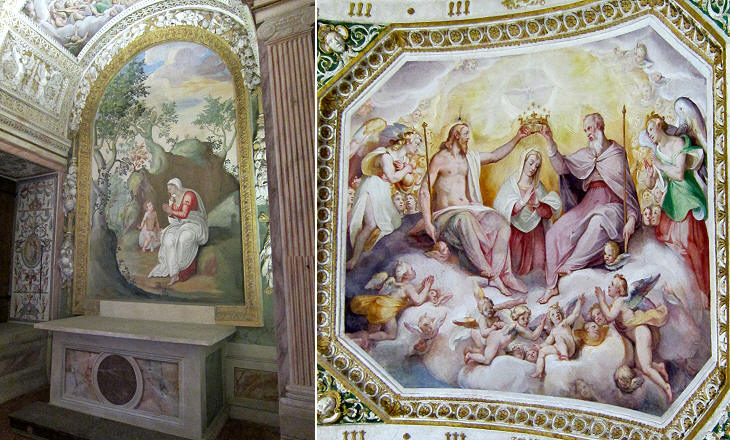 Chapel: (left) altar with copy of "Madonna della Ghiara", the original being a much venerated image at Reggio Emilia, one of the fiefdoms of the Este (the painting was placed on the altar in 1771); (right) ceiling by Federico Zuccari

In the after part of the day, we paid a visit to the Villa d'Este, a building which, from its formal and elaborate magnificence, might stand as a representative of its whole class. Vast sums of money were lavished upon it. (..) It is now uninhabited and falling to decay.
George Stillman Hillard - Six Months in Italy in 1847-1848
Cardinal Luigi d'Este bequeathed the villa to his brother Alfonso II, Duke of Ferrara. Following the death of Alfonso in 1597, Ferrara was annexed to the Papal State. The Este retained Modena and Reggio until 1860, but their importance in Italian matters was very limited. Cardinal Alessandro d'Este was appointed governor of Tivoli in 1599 and he lived at Villa d'Este, but over time the Este stripped the palace of the works of art which embellished it.
At the beginning of the XXth century William Dean Howells was tempted to buy it for thirty thousand dollars, but eventually in 1918 Villa d'Este was acquired by the Italian State. It was the beginning of a long process of restoration which was recognized in 2001 by the inclusion of Villa d'Este in the UNESCO Heritage list. 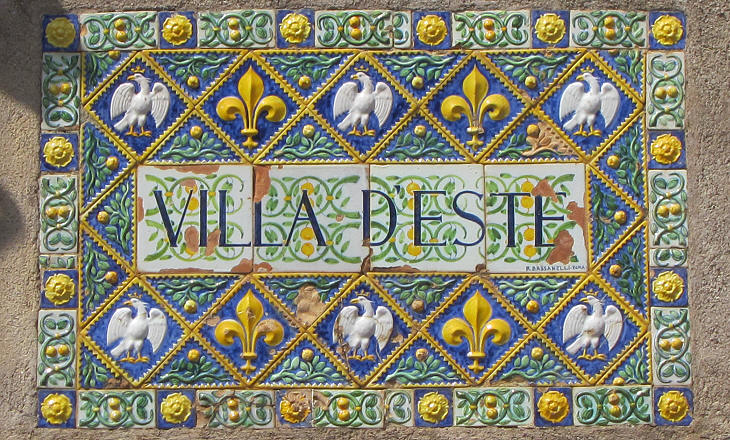 Other pages on Tivoli:
Roman Tivoli
Medieval and Renaissance Tivoli
Villa d'Este - the Gardens
Villa Adriana
Villa d'Este and Tivoli in the 1905 paintings by Alberto Pisa