- Basilica of Saint-Sernin at Toulouse
(relief at Glanum and quotation from Pliny: "It is More Similar to Italy than to a Province")

You may wish to see an introductory page to this section or a page on Roman Toulouse first. 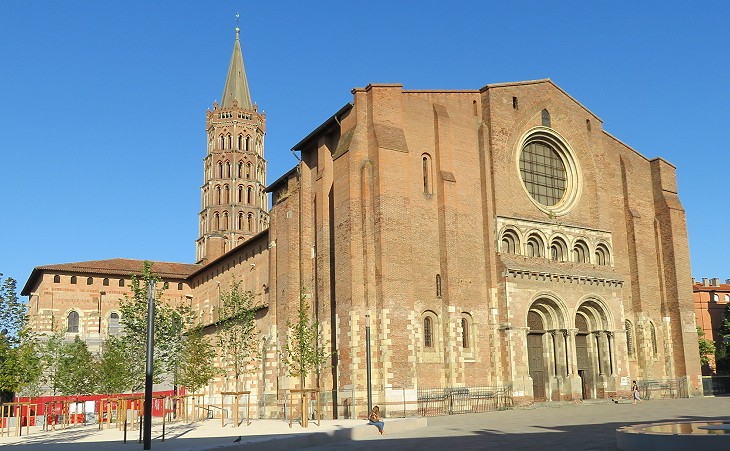 The Church of St Sernin is one of the fairest in all France, encompassed all about with many faire Altars and overlaid with gold, so that it may be wel conjectured the Friers belonging to this Church have not neglected any cost to make it a famous building.
Francis Mortoft's Journal of his travels in France and Italy in 1659
The church of S. Saturnin, first bishop of Toulouse, is a large magnificent edifice, but very dark; it is valued by the inhabitants chiefly for its vast treasure of relics.
Thomas Nugent - The Grand Tour - 1749
St Sernin, the largest, oldest, and most perfect ecclesiastical edifice here, is a plain building of brick and stone in the Romanesque style dating from the year 1096, when it was finished and consecrated by Pope Urban II (at the same time as the Abbey Church of Saint-Gilles).
John Murray III - Hand-book for Travellers in France - 1843
The basilical Saint-Sernin (late 11th to mid 12th century) is one of the most beautiful Romanesque churches in France. Its architectural structure illustrates the characteristics of the pilgrimage church. Brick dominating stone, which is used only for sculpture and some architectural details, is typical of the Romanesque art of Languedoc. (..) There is no longer a debate as to which was the earliest home of western Romanesque sculpture. It is now agreed that towards the end of the 11th century artists were employing a monumental order inspired by ancient Rome on large projects, such as Santiago de Compostela or Saint-Sernin in Toulouse.
From the 1998 document supporting the inclusion of the Basilica in the UNESCO World Heritage List with other French churches, e.g. the Cathedral of Saint-Bertrand-de-Comminges, Saint-Seurin (Severinus) at Bordeaux, Saint-Front at Perigueux and Saint-Eutrope at Saintes on the route to Santiago de Compostela. 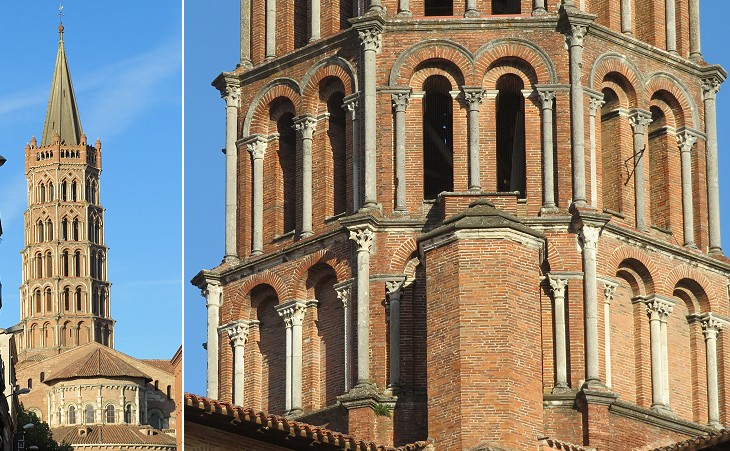 Steeple and its lower Romanesque tiers

It is conspicuous for its lofty octagonal tower formed by five tiers of arches, each story less in size than that below it, the lower tiers surrounded by circular arches, the two upper by angular ones. The upper part is of the 14th century, the lower corresponds exactly in style with the church below. Murray
The great church of S. Sernin is the most important monument of the Romanesque style in France in the 12th century. Over the crossing rises a lofty steeple of octagonal stages set inwards one by one, and finishing with a spire. To support this, which is a later addition, the four piers at the crossing have had to be enlarged at the expense of the interior view of the nave.
Thomas Graham Jackson - Byzantine and Romanesque Architecture - 1913 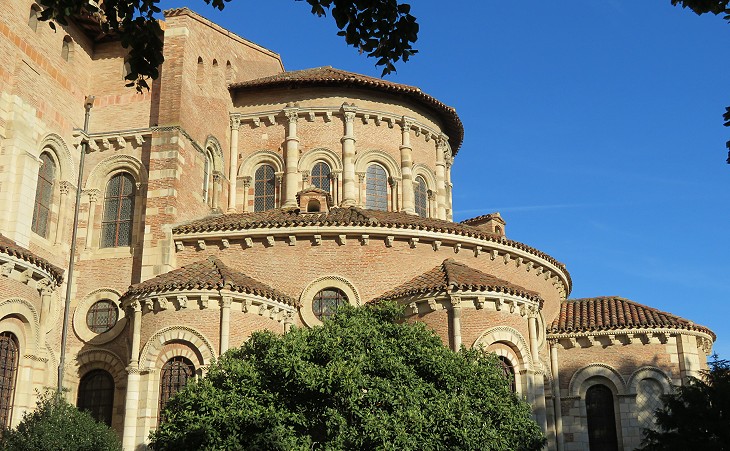 It is an immense cruciform church, with double aisles to the nave, and a single aisle surrounding both the sides and ends of the transepts, and it finishes eastward in an apse surrounded by an ambulatory aisle, with five semi-circular chapels projecting from it. It thus possesses every feature of the complete plan of French ecclesiology. Jackson
The first ambulatories (from Latin ambulare, to walk) were designed in France in ca 1050; they allowed a better access to relics and they facilitated the passage of processions through the church. They were not an entirely new architectural feature, because they were utilized already in antiquity, e.g. at the Temple to Telesphorus at Pergamum. See the ambulatory of St. Maria in Kapitol at Cologne, another XIth century Romanesque church, and that of S. Maria a Piè di Chienti (early XIIth century). 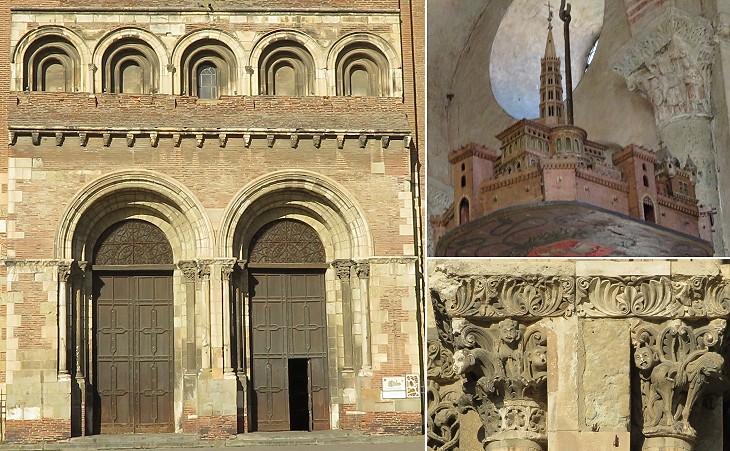 (left) Western portal, that of the façade; (right-above) model of the church before the French Revolution; (right-below) details of the western portal

In the apse is a model of the church as it stood before the Revolution, showing that it formed an isolated fortress apart from the town, walled in by towers and battlements. (..) The Crypt under the choir modernized in the 15th century was the place of deposit of relics in great number and esteemed of immense value. Before the Revolution this church indeed boasted of possessing the bodies of no less than seven of the apostles, one of them being a duplicate of St James, another of his bodies being preserved at Compostella. Murray
Today the façade stands on a large XIXth century open square, but in origin its view was limited by fortifications which protected Saint-Sernin, its Abbey and its precious relics and reliquaries. The church was built on the burial site of St. Sernin, which was outside the walls of the Roman town. The southern side of the church faced the town and its two portals were commonly used, rather than the western one, which therefore had a rather plain decoration. 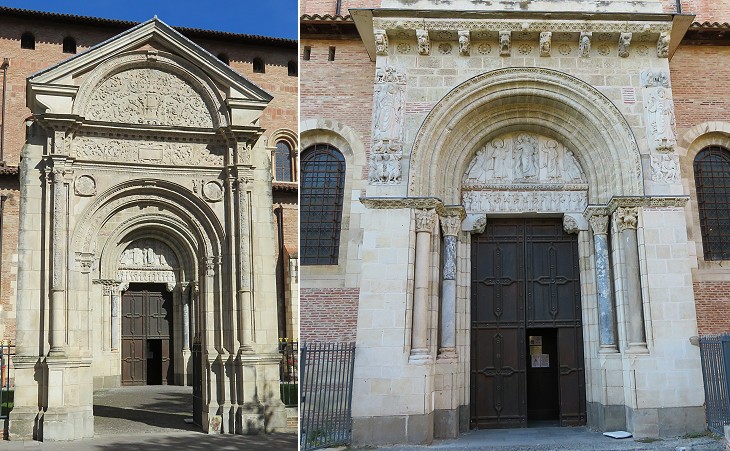 (left) Renaissance portal of the Abbey which was relocated before Porte Miègeville (the name means towards the middle of the town), the main entrance to the church; (right) Porte Miègeville

The buildings of the Abbey almost surrounded the church; they were all dismantled after 1804 with the only exception of Saint-Raymond, a hospital which today houses the Archaeological Museum of Toulouse.
Of its two S porches one is distinguished by a curious early bas relief over the door in the Byzantine style and by the capitals of its columns representing the murder of the Innocents, expulsion of Adam, etc. Murray
The portal was decorated at the time of the consecration in 1096 or immediately after. Its many reliefs were designed according to precise theological directions aimed at illustrating the concept of Salvation. 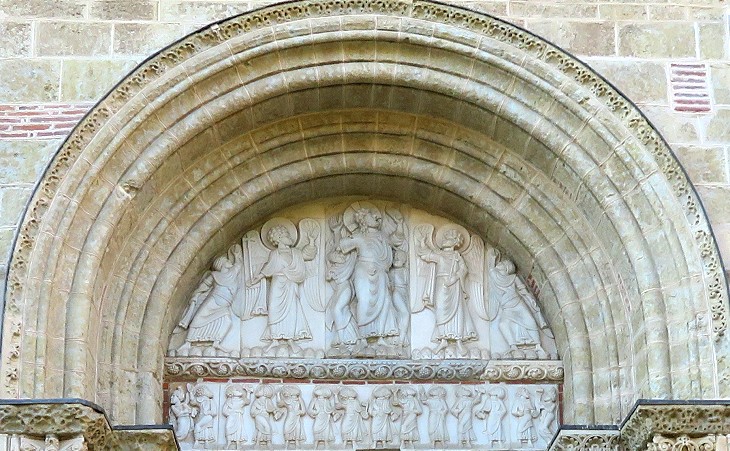 Porte Miègeville (tympanum): Ascension; the partition of the space and the use of a plurality of pieces to compose the relief can be observed also at Saint-Bertrand-de-Comminges; a reused sarcophagus forms the lintel and shows the Apostles gazing up heavenwards

On the south side is a porch and doorway with a stilted round arch of two deep moulded orders on jamb shafts, containing in the tympanum a marble relief of the Ascension. In the details classic tradition shows itself, especially in the cornice with sculptured brackets by way of modillions across the base of the gable. Jackson 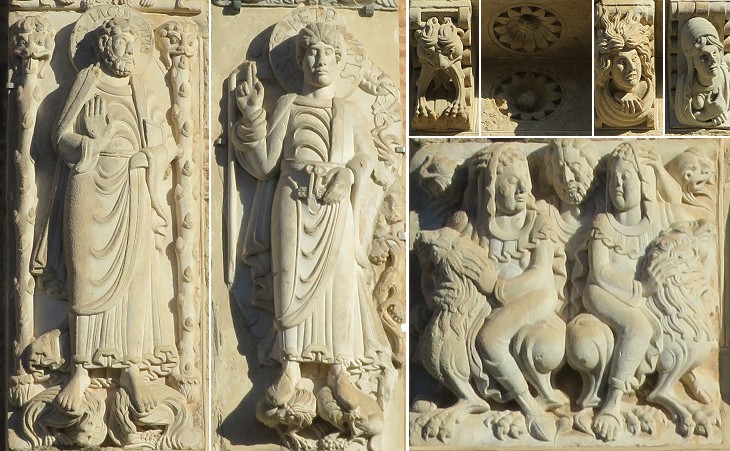 Porte Miègeville: (left) St. James the Great ("Santiago" in Spanish); (centre) St. Peter; (right-above) details of the cornice: a monster, the sun and the moon; (right-below) relief portraying Montanus, a IInd century priest of Cybele who converted to Christianity, along with his two female disciples Priscilla and Maximilla, who ride lions, a reference to Cybele; they were regarded as heretics, because they claimed they could make prophecies; the relief is placed below that of St. James to indicate that the latter is stepping on them

The relief portraying St. James together with St. Peter is an indication that the Basilica was ideologically linked to Santiago de Compostela (and to Rome); St. James is not depicted with the scallop shell which is his best known iconographic symbol and St. Peter is unusually portrayed as a clean-shaven young man. 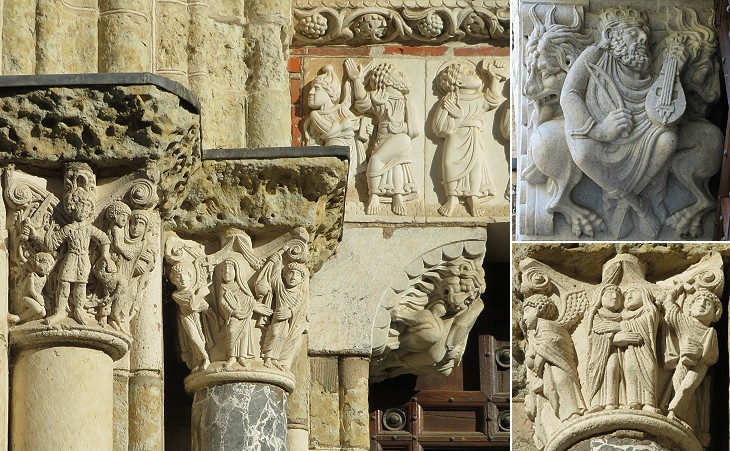 Porte Miègeville: capitals with scenes of the Gospel (Massacre of the Innocents, Annunciation and Visitation) and a relief portraying King David playing a string instrument with a bow; it is known as "vieille" and it was used by the troubadours, medieval poets of the region of Toulouse and in general of Southern France

Who shall ascend into the hill of the Lord? or who shall stand in his holy place?
He that hath clean hands, and a pure heart; who hath not lifted up his soul unto vanity, nor sworn deceitfully.
He shall receive the blessing from the Lord, and righteousness from the God of his salvation.
Psalm 24: 3-5 King James Version
This passage was regarded as a prophecy of the Ascension which explains the relief portraying King David, the author of the psalm. 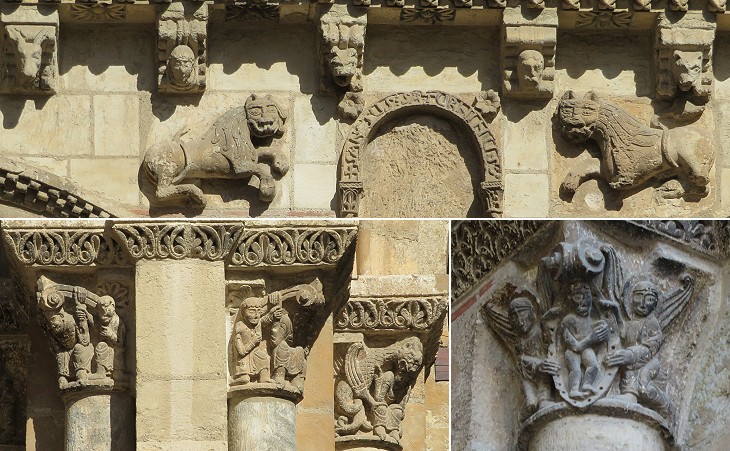 Porte des Comtes: details of its decoration; it was damaged during the French Revolution: the central niche housed a statue of St. Saturnin

The other, a double portal leading into the S transept, bears carved capitals of the seven deadly sins. Murray
This second entrance gave direct access to the southern transept and to a funerary chapel of the Counts of Toulouse. The construction of Saint-Sernin coincided with the rule of William IV (1061-1094) and Raymond IV (1094-1105), Counts of Toulouse and lords of other fiefdoms in Southern France, including Narbonne, Nîmes, Uzès, Saint-Gilles and Comtat Venaissin. In addition to promoting the construction of churches, they showed their religious zeal by taking part in the First Crusade. In 1109 Bertrand, son of Raymond IV, was made Count of Tripoli in today's Lebanon; his heirs ruled that county until 1187. 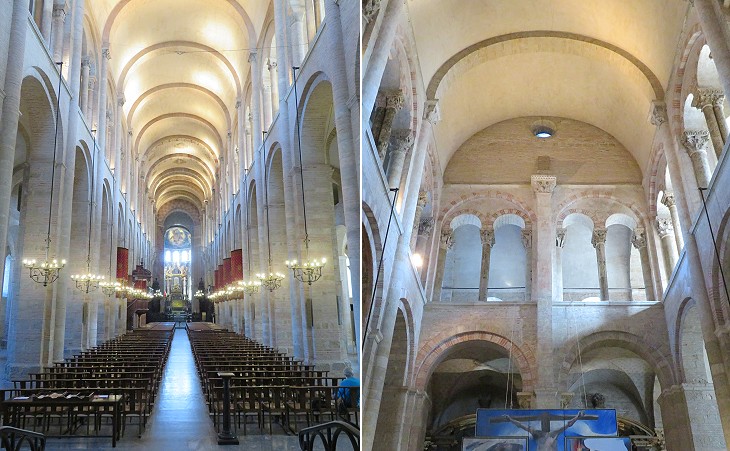 The interior is remarkable for its very long Nave, not unlike that of St Albans, but flanked by double aisles. Its cradle vaulted roof is supported by plain angular piers having engaged columns and above its circular arches runs a triforium having slight double pillars with delicately cut capitals continued all round the transepts and lighted by windows on the outside. Murray
The nave is less than 30 ft. wide, and strikes one as narrow for so vast an edifice. Viollet-le-Duc however takes it as a pattern of good proportion, so pleasing that he was led to study it analytically. (..) The nave has a round barrel vault counterthrust by quadrant vaults over the triforium. Jackson
Apparently the triforium has some slightly horseshoe arches, similar to those which can be seen in a XIIth century building at Girona, south of the Pyrenees, and which are typical of Moorish architecture. 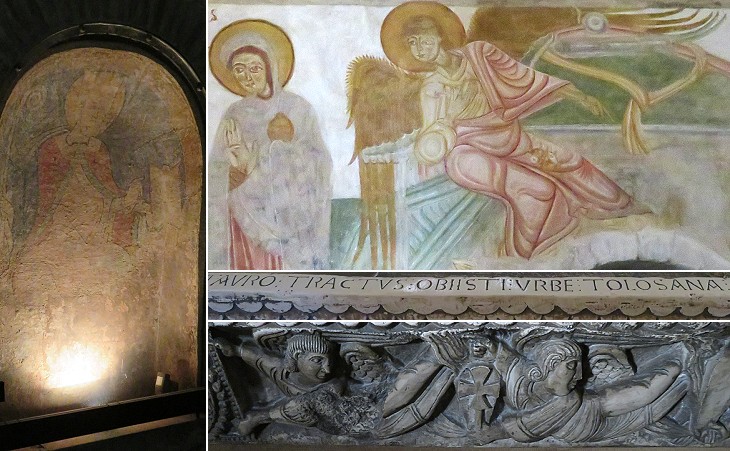 Northern transept: (left and right-above) XIIth century frescoes; (right-below) details of a 1096 altar by Bernard Gilduin with a dedication to St. Saturnin who "dragged by a bull, died in the City of Toulouse"; it ends with "BERNARDUS GELDUINUS ME FECIT"

The northern transept communicated with the adjoining abbey; in recent years maintenance works have revealed traces of the original frescoes which decorated it. It houses the altar which was made for the consecration of Saint-Sernin; a well carved inscription indicates that it stood above the tomb of St. Saturnin in the main apse; it was perhaps surrounded by other reliefs (see below) by the same sculptor which were eventually moved to the ambulatory. 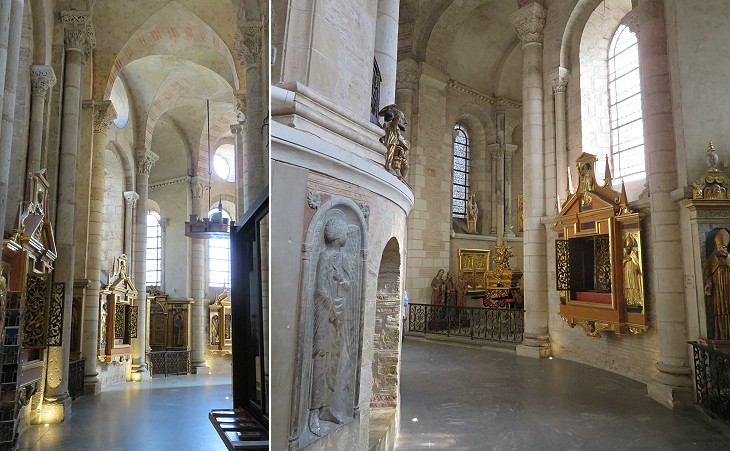 From the aisle behind the high altar project five apsidal chapels decorated with curious carvings of saints and legends in wood. Murray
In the apse, with its ambulatory and projecting chapels, we have the French chevet completely developed. The earliest Christian churches of course had no chapels. The Greek church to this date only allows a single altar. The earliest cathedrals in France seem to have been without chapels, and indeed without ambulatories. Many of those in the south and west of France still end in plain apses like the cathedral of Angers (or the church of Abbaye-aux-Dames at Saintes), or even end square, like that of Poitiers and several of the domed churches of Perigord. Jackson 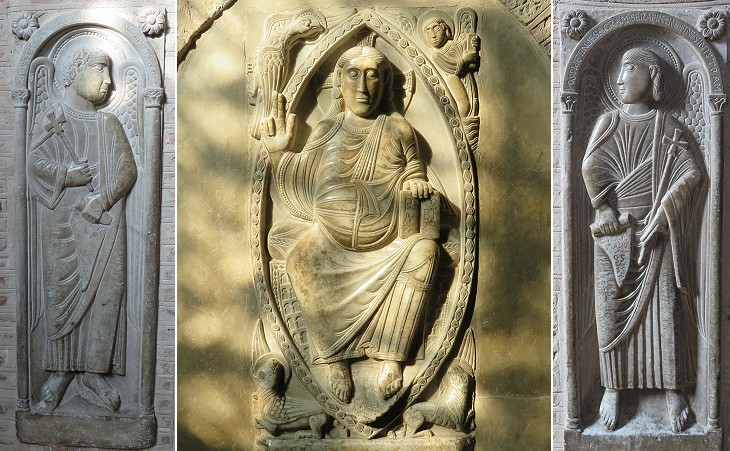 Reliefs by Bernard Gilduin portraying Jesus Christ in a "vesica piscis" (aka "mandorla"), a pointed aureole (see other examples in the Romanesque portal of St. Trophime at Arles and at Le Mans), surrounded by the symbols of the Four Evangelists, between a cherub and a seraph

Some curious Byzantine bas reliefs in white marble (..) are let into the wall of the aisle behind the choir; they represent our Saviour, angels and saints. Murray
The reliefs were meant to depict in marble a Te Deum; the cherub and the seraph hold a scroll with the words Et Clamant Sanctus, Sanctus, Sanctus, a passage of the hymn To thee Cherubim and Seraphim: continually do cry, Holy, Holy, Holy.