to Make a Tour of Rome

In the late 1940s Italian movies became famous for their realistic depiction of the lower classes struggle to overcome the moral and material miseries caused by the war. While the best known movies by Roberto Rossellini and Vittorio de Sica dealt with the tragic aspects of post-war society, other movies dealt with the same subject in a lighter manner. These comedies were usually set in Rome also for economical reasons, as the Italian movie industry was and is located in Rome: a situation often portrayed in these comedies was related to an argument occurring on a crowded tramcar. 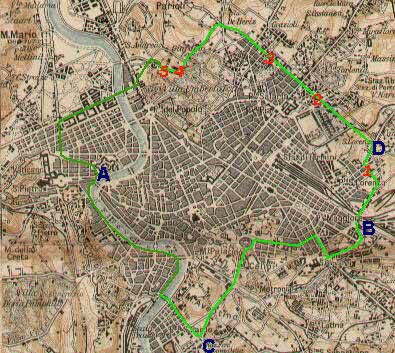 By definition the typical Roman tramway was the External Circle Line which run close to the ancient walls from Castel Sant'Angelo (A in the map) to Porta Maggiore (B in the map) via Porta S. Paolo (C in the map), but went back through the late XIXth century/early XXth century new boroughs of Rome via S. Lorenzo Fuori le Mura (D in the map). In the 1960s tramways were replaced by buses and only in the 1990s they became again popular because of their limited impact on pollution, but in the meantime some of the rails had been dismantled.
Today the External Circle Line route is served by three lines:
Line 3 (tramcar) (bright green in the map) from Porta Portese to Piazza Thorvaldsen (in the northern part of Villa Borghese);
Line 19 (tramcar) from Piazza Thorvaldsen to Piazza Risorgimento (near Porta Angelica);
Line 23 (bus) from Piazza Risorgimento to Porta Portese.

Line 3 between Porta Portese and Porta Maggiore is a sort of tour of Rome: the itinerary includes the crossing of the river at the old harbour of Ripa Grande, Porta S. Paolo, the ruins of the Servian walls, Circus Maximus, S. Gregorio al Celio, Colosseo, S. Clemente, SS. Pietro e Marcellino, S. Giovanni in Laterano, and S. Croce in Gerusalemme. This page deals with some interesting buildings in the part of the itinerary which runs outside the ancient walls. 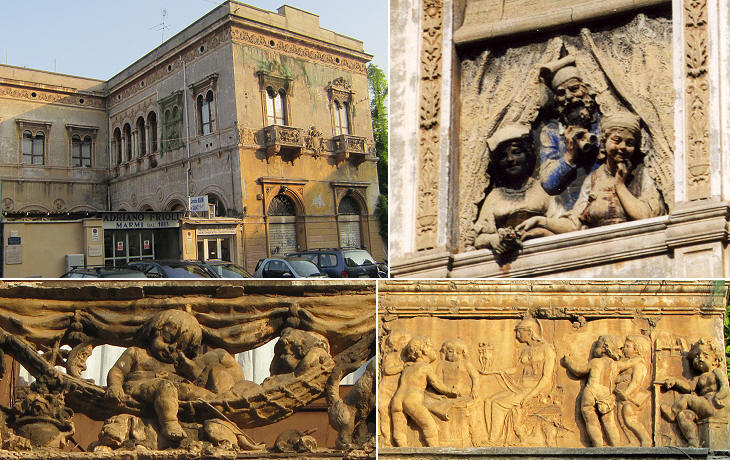 House in Via Tiburtina

This small building attracts the attention of the passers-by for its unusual decoration which includes a fake window showing a sort of smiling family. The characters are dressed with traditional costumes which were already not in use when the house was built at the beginning of the XXth century. 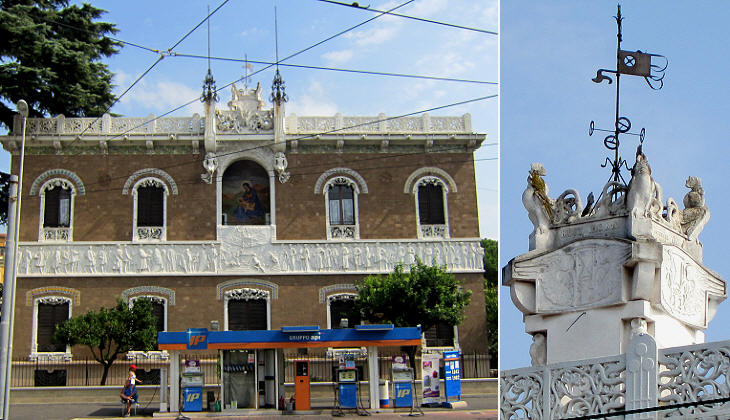 Ettore Ximenes (1855-1925) was a sculptor known for his monuments celebrating national heroes (Garibaldi in Milan, General Belgrano in Buenos Aires, Giovanni da Verrazzano in New York, czar Alexander II in Kiev and Law in the Monument to King Victor Emmanuel II). With the money he earned he built a house which shows his predilection for the use of symbols to represent ideas (hopefully he did not fully rely on the viewer's smartness and he added a few sentences which provide some help). The four cocks on the top of the little tower are an incitement to not waste time because Ruit Hora (time runs away).

Detail of the frieze

The large frieze shows a complex scene: the various generations pay tribute to the altar of the arts (Ara Artium): the primitive man on his knees is followed by an Egyptian, then by an Assyrian and behind him Greeks, Romans, etc...

Piazza Buenos Aires (No. 3 in the map) 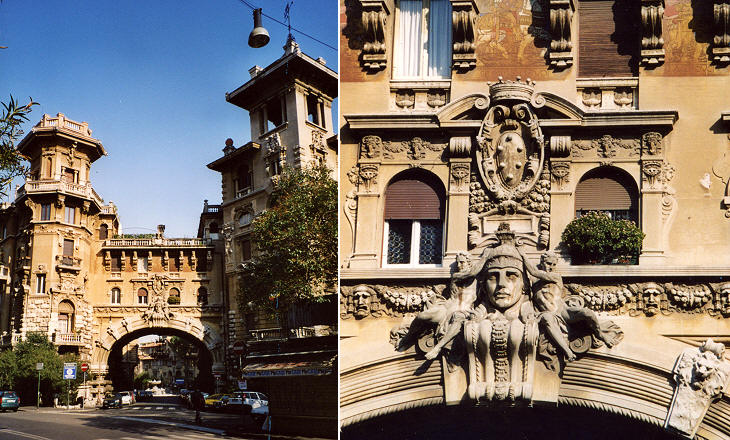 Gino Coppedè (1886-1927) was commissioned the design of some 20 buildings in a newly developed area. His works are a perfect example of the eclecticism which characterized the beginning of the XXth century (eclecticism i.e. doctrine borrowing freely from various sources). The entrance to the new development is colossal with a sort of bridge connecting two large buildings. The decoration of the bridge includes a coat of arms of the Medici family (extinct in 1737 and thus unable to complain), heads of lions and horses, frescoes, festoons with ancient masks and oil lamps. 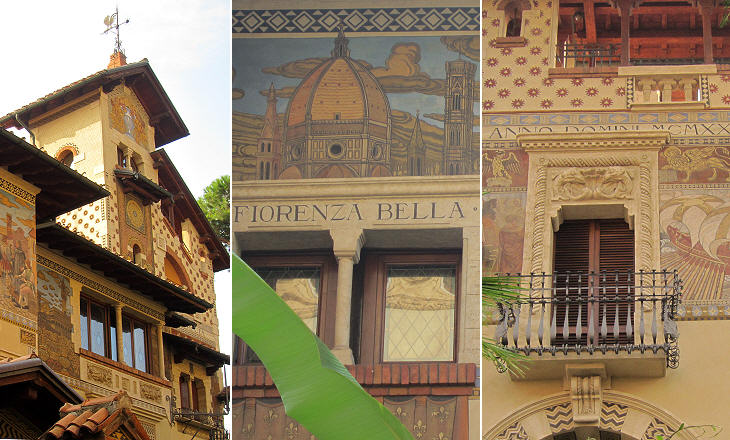 One of the buildings is now known as Villino delle Fate (fairies) because of its extravagant decoration: the image above shows a gothic staircase; the Florentine corner; the Venetian corner. 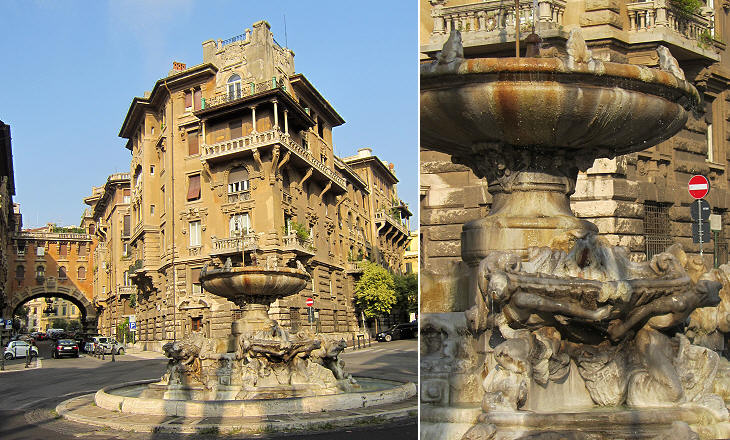 The fountain at the center of the buildings brings to mind Fontana delle Tartarughe with frogs replacing tortoises. 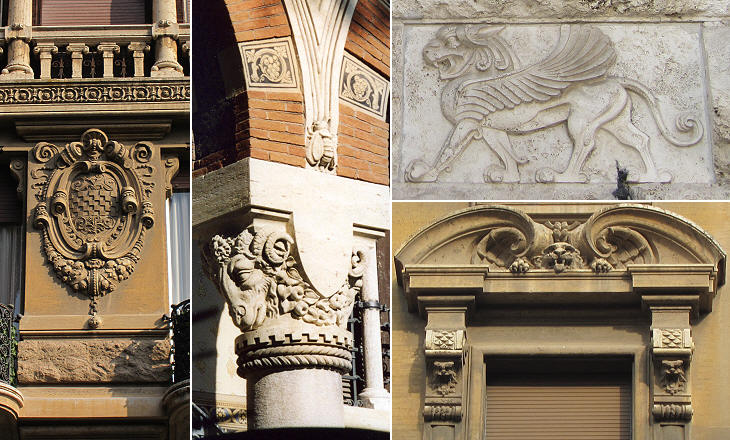 The buildings were targeted to the emerging upper classes whose members were very fond of nobiliary signs so the decoration often shows coats of arms. The bees are a reference to the industrial development of the country and the wheels forming the capital of some columns are also hinting to that, while this type of ram's head is more Egyptian than Roman. Coppedè and his patrons had also a fancy for Assyrian lions.
You may wish to see some more buildings in this neighbourhood.

Piazza Thorvaldsen (Nos. 4 and 5 in the map) 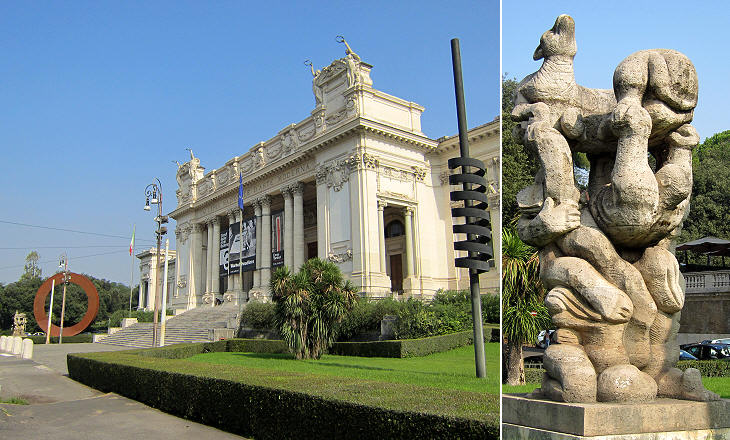 In 1911, for the 50th anniversary of the Kingdom of Italy, Rome saw the completion of several buildings including Galleria Nazionale d'Arte Moderna, a museum dedicated to the Italian artists of the XIXth and XXth centuries. Many other ostentatious buildings of the same period were located in the historical part of Rome and look very much out of context, while this gallery designed by Cesare Bazzani in an open space immediately outside Villa Borghese gains from its isolation. The last stop of the tramway is in a square dedicated to Bertel Thorvaldsen, the Danish sculptor who lived and worked in Rome for 40 years (1797-1837). He is remembered by a bronze copy of the statue by which he gained his initial success. The statue represents Jason and it was modelled in plaster in 1802 (the marble statue was completed only in 1828). The body is shown frontally while the face is turned and we see its profile: this posture was in line with the canons of Neoclassicism, which predicated either frontal or profile views, but the combination of the two seems influenced by the greater knowledge of Egyptian art, which originated from Napoleon's 1799 expedition to Egypt. 1934 Monument to Simon Bolivar by Pietro Canonica. You may wish to see another monument to him at Montesacro