- Traù - the Cathedral
(a sphinx at Diocletian's Mausoleum) 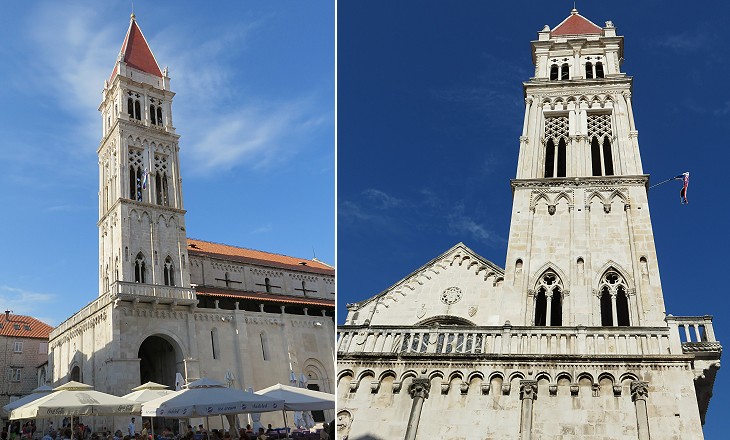 The duomo of Traù has the great advantage of being built throughout in one consistent style and according to one design. The additions which it has received in later times are so made as to leave the original fabric untouched, and they are not visible in any general view that can be obtained of the exterior. The church has also the advantage, so rare in Italy, of being completed outside as well as inside, instead of presenting like so many Italian churches a rough face of unfinished brickwork or masonry, awaiting, and awaiting in vain, the splendid veneer of marble or sculpture that never comes. In this respect the Dalmatian churches seldom fail to satisfy the eye; though they were very long in building, the modest scale on which they were planned enabled their builders, sooner or later, to complete them handsomely and well, and to make them as beautiful without as they were within.
It is said that a church existed here in the time of Constantine, and that it was rebuilt in 503 with the bequest of Quinus, a patrician of Salona. In 1123 this cathedral perished at the destruction of the city by the Saracens, and its reconstruction was hardly begun in 1200-3. The work was again suspended, but was resumed in good earnest by Bishop Treguano, a Florentine, who ruled the see from 1206 till 1254. In 1207 the Comune granted him certain farms for the benefit of the church, and the work progressed slowly but steadily, the south door bearing the date 1213, the splendid western door that of 1240, and the walls being finished it is said in 1251. The west gable of the nave however bears the arms of Bishop Casotti, 1362-71, from which it would seem that a long interruption of the work took place, and it is said the nave vaults were not closed before 1440. The lower stage of the campanile above the porch roof is dated 1421, and the top of it with its spire was finished at the close of the sixteenth century.
The plan is basilican, with nave and aisles five bays in length, and ending in three apses, and the west end is preceded by a magnificent Galilee-porch or narthex of the full width of nave and aisles. This Galilee rises to half the height of the nave, and was to have been surmounted by two western towers with spires, between which the west end of the nave with its gable and rose window would have been seen recessed to the back of the porch and towers. One tower of the two has been completed, and, though the upper part is not worthy of the lower, it forms a splendid finish to the cathedral.
Sir Thomas Graham Jackson - Dalmatia, the Quarnero and Istria - 1887
Sir Thomas Graham Jackson (1835-1924) was one of the leading architects of his time. He visited Traù in 1885 and he wrote a very detailed account of its monuments, in particular of the Cathedral. 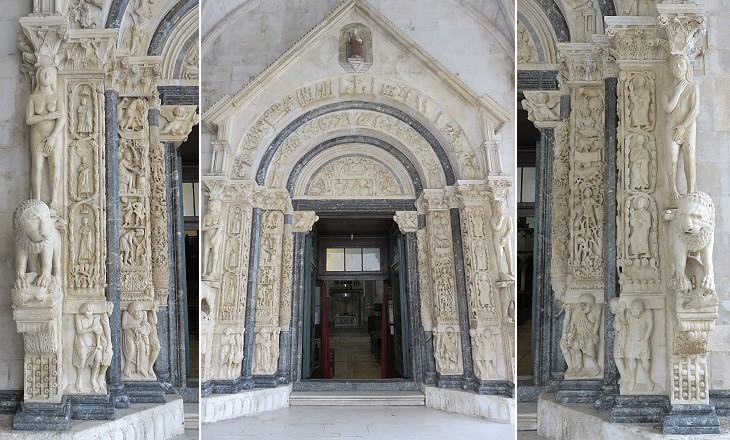 This porch forms a magnificent vestibule, adding much to the dignity of the church, and the tempered light which reigns within enhances the solemn splendour of the sumptuous western portal of the nave, the glory not of Traù only, but of the whole province, a work which in simplicity of conception, combined with richness of detail, and marvellous finish of execution, has never been surpassed in romanesque or Gothic art. Erected, as the imperfect inscription on the lintel records, in 1240, it is still thoroughly romanesque in general design, but its comparatively lofty proportion and the refinement of its execution show that it belongs to the late or transitional period of the style. T. G. Jackson 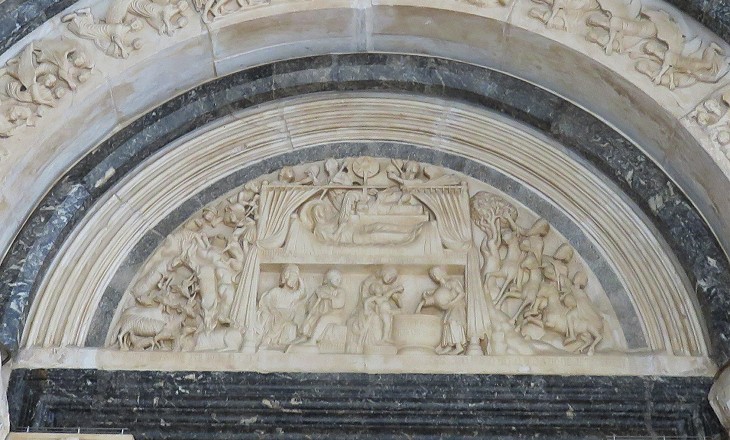 Reliefs above the lintel of the main portal

In the centre of the tympanum is a sculpture of the Nativity with its attendant circumstances, arranged in two stories one above the other, and enclosed by a canopy of curtains. In the upper story the Virgin lies in bed with the infant Saviour in a cradle, (..) while the presaging star from above pours a ray of light on the Saviour's head. (..) In the lower story the holy child is being washed, while Joseph and a shepherd sit by. (..) Outside the canopy the three kings are seen approaching on horseback and on the other side are the shepherds with their flocks. Along the lintel runs the inscription recording the date 1240 in the episcopate of the Florentine Treguano, and the name of the artist Raduanus or Radovan. Here again we find a latinized Croat rivalling if not surpassing in his own style the romanesque artists of the other side of the Adriatic and Germany. T. G. Jackson Details of the main portal (all on Eve's side - left to right): 1) a camel, an elephant, a bear and a flying griffin which plucks out the eyes of a pig; 2) men wearing turbans; 3) scenes from life (a man killing a pig, while a kind of camel-monster seems attacking him in the rear; a man boiling a pot and perhaps making sausages, a string of which hangs behind him, while he raises a cup into which a servant pours water; a woodcutter and a leather-worker) and a Renaissance cupid; 4) Eve

The scrollwork on the inner face of the portal is magnificent and in its way unsurpassable, boldly designed, but yet finished like ivory carving. (..) Some figures are interesting portraits of the Dalmatian peasantry of the XIIIth century. (..) The lintel is supported by two brackets with amorini in the renaissance style, fairly carved but incongruous in effect. T. G. Jackson The interior of the cathedral of Traù is sombre and majestic. The design is simple and massive, and the height is very great, almost excessively so for the length of the building. The masonry is carefully faced, and having never been whitewashed it has been brought by time and candle smoke to a warm grey colour, like our own Westminster Abbey, which has been equally fortunate in escaping the brush. The dark walls, dimly lit by the subdued light that finds its way through the narrow deeply splayed windows and the great western rose, give the interior a harmony of colour and a mysterious solemnity that is very impressive. (..) Over the altar is one of those striking ciborii or baldacchini in which Dalmatia abounds; it resembles those at Curzola and Cattaro, and consists of four cipollino pillars carrying a four-square tester or architrave surmounted by two octagonal stages of colonnettes supporting sloping roofs and gradually diminishing pyramidally. T. G. Jackson
The interior has been whitewashed and it has lost the mysterious solemnity mentioned by Jackson. The pulpit, which is said to have cost 800 zecchini (Venetian gold coins), resembles that at Spalato, and was perhaps imitated from it, but it is octagonal instead of hexagonal, and this gives it a comparative heaviness. The capitals and cornices of romanesque foliage intertwined with beasts and serpents were once gilt. The execution of this pulpit is exactly like that of the ciborio, and the two most probably are the work of the same hand and the same time. T. G. Jackson
Today Master Radovan is credited with both pulpits, although no actual records (inscriptions, payments) support this opinion. 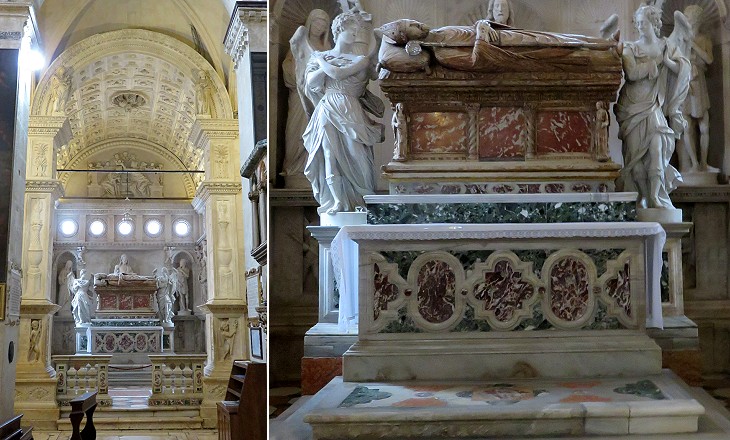 The chapel of S. Giovanni Orsini (..) was begun under Bishop Trugloni, the architects being Niccolò Fiorentino, of whom we have already heard at Sebenico, and Andrea di Alessio, or as he is elsewhere called Andrea Alessi of Durazzo, an Albanian artist of whom we hear again both here and at Spalato and Arbe. The contract was dated Jan. 4, 1468, (..) and the work occupied six years. The chapel is rectangular, and lined with rich architecture and sculpture in the style of the Renaissance. The altar stands in the middle of the floor away from the walls, and above it, smothered in modern flummery and rococo marble work, is the ark of white marble with twisted columns containing the body of the saint. The panels are of a red marble resembling that of Languedoc, and the twisted shafts were once gilt. On the sloping lid lies the figure of S. Giovanni Orsini (dated 1348), (..) the shrine being much older than the chapel which contains it. T. G. Jackson 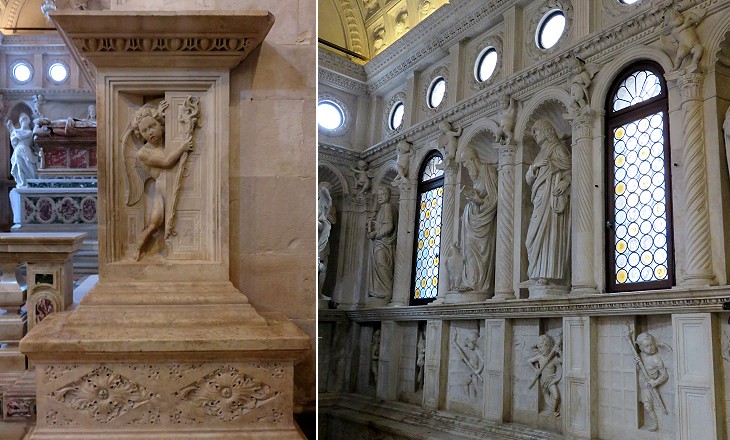 Below the springing run two cornices divided by a space which is pierced with round windows between flat pilasters. The stage below is the most important; each side wall contains six round arches, of which two are pierced with windows, and the other four sunk into niches containing statues nearly as large as life. (..) Below this stage is another consisting of square panels divided by pilasters. Each panel is supposed to be filled by a pair of folding doors, of which one is ajar, and through the opening emerges a winged boy holding a torch. The attitudes of these children are varied and show a good deal of fancy; some have flaming torches, others are blowing torches which are nearly or quite extinguished; but the execution of the figures is unequal. T. G. Jackson 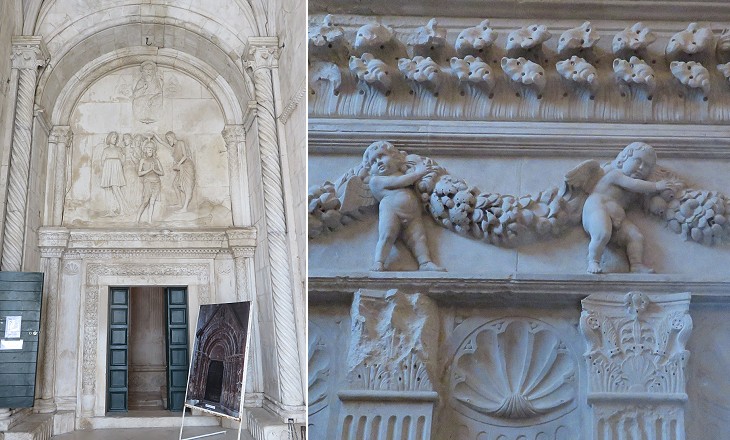 The Baptistery opens out of the north end of the western portico, and was built in 1467 by Andrea Alessi. It is a rectangular chamber ceiled with a pointed barrel vault decorated with coffers containing rosettes. (..) All round the chapel at the springing level runs a cornice of foliage, which, strange to say, though not so well executed, resembles the cornice above the nave arches at Sebenico, and must have been copied from it. Below is a frieze of boys carrying swags, of whom some are excellent, others unequal. The lower and principal stage is covered with flat pilasters, with narrow niches between them slightly sunk in deceptive perspective and finished with shells in their heads, all exactly like the work of Giorgio Orsini at Sebenico, an artist whom Alessi resembles much in the character of his work. The entrance from the portico is surmounted by a sculpture in relief of the baptism of our Lord, treated in a dry and severe manner, but not without merit. T. G. Jackson 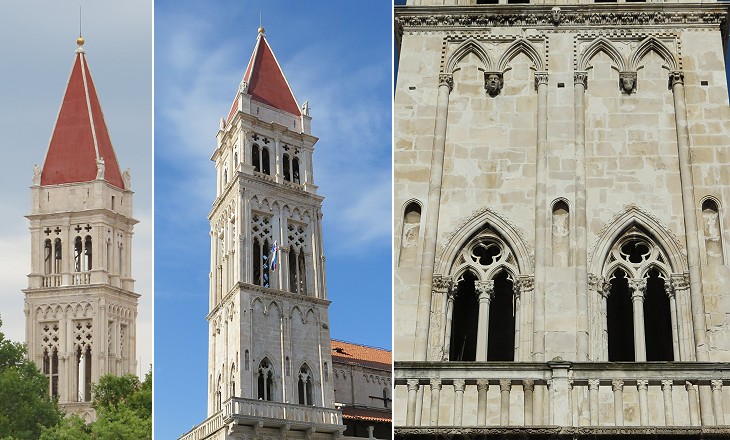 From the terrace we entered the first stage of the campanile, which is of excellent Gothic work with good details. The two-light windows have octagonal shafts dividing the lights, each face of the shaft being very slightly concave in order to give brilliancy to the edge; and the tracery in the head is correctly ramified on the principle of Gothic bar-tracery. On the inside of one of the springers is a shield bearing an inscription with the date 1422, and the names of the architects Matteo and Stefano. This date is two years after the bombardment of the city by Pietro Loredano in 1420, at which time the campanile was already standing, and received considerable injury from the missiles of the besiegers. (..) The stage above this is in the same style, and probably by the same artists; it has traceried windows on all four sides, those to the east and west having a reticulation of quatrefoils in the heads, and those to north and south tracery-work of cusped circles. The final stage with the spire above it is of inferior work, with Gothic and renaissance details mixed together, and belongs to the sixteenth century, the date of its completion being 1598. T. G. Jackson