Porta Pia
(Vasi at work in the Grand View of Rome) 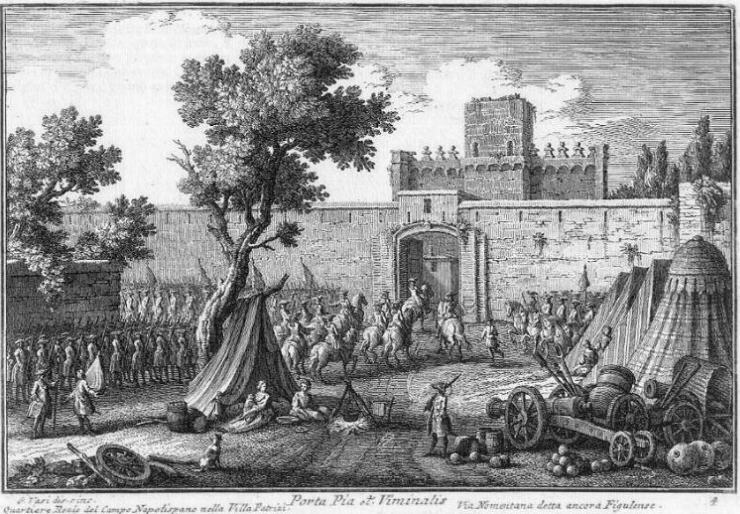 In 1747 Giuseppe Vasi dedicated his first book of etchings to Charles of Bourbon, King of Naples and of Sicily, who became King of Spain in 1759 (as Charles III). As King of Naples, Charles preferred not to add a number to his name; in theory he should have called himself Charles VII, but he regarded some of his predecessors as usurpers.
In this plate Vasi portrayed Charles entering Porta Pia to pay a visit to Pope Benedict XIV in November 1744. You may wish to see a painting by Giovanni Paolo Pannini depicting the actual event which took place at the casino in the gardens of Palazzo del Quirinale. It was not just a courtesy visit; a few months earlier Charles had invaded the Papal State to prevent an Austrian army from advancing towards Naples; the enemy was defeated at Velletri, but Charles and his troops remained in the proximity of Rome to put pressure on the Pope and ensure he would confirm the rights of Charles to the thrones of Naples and Sicily.
The gate is named after Pope Pius IV who built it after having opened a new long and straight street between Piazza del Quirinale and this section of the walls. The view is taken from the green dot in the small 1748 map here below which shows: 1) Porta Pia; 2) Gardens of Villa Patrizi; 3) Villa Costaguti Torlonia. The dotted line near Porta Pia in the small map delineates the border between Rione Trevi (left) and Rione Monti (right). 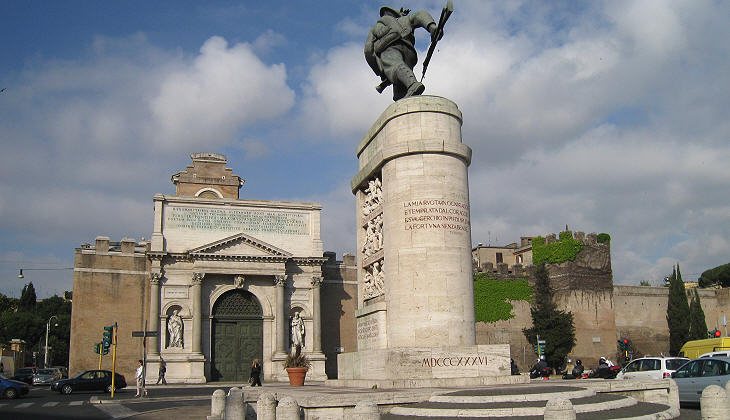 The outer gate of Porta Pia was built in 1868, during the pontificate of Pope Pius IX. It replaced the simple portal which is shown in the etching. In 1870, the collapse of the Second French Empire left the Pope without allies (Emperor Napoleon III protected the State of the Church); on September 20, the Italian bersaglieri (quick-moving light infantry) entered Rome through a breach near Porta Pia. In 1936 a monument to the bersaglieri was erected opposite the gate to celebrate the centenary of the corps foundation (another view of the monument can be seen in the image used as background for this page). 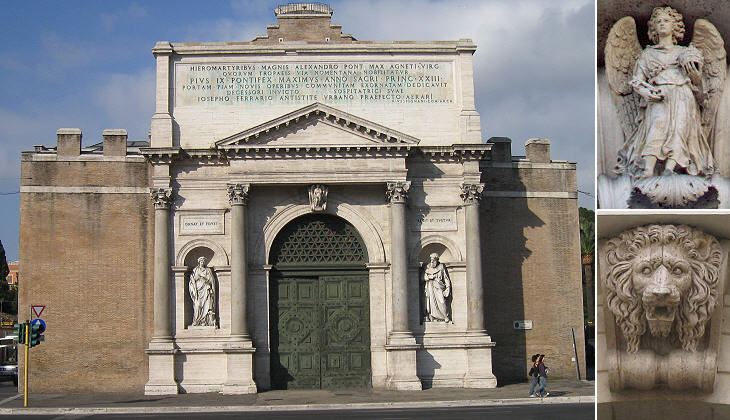 The new gate was designed by Virginio Vespignani (who also designed new Porta S. Pancrazio) and it was dedicated to St. Agnes and to Pope Saint Alexander I who both suffered martyrdom along Via Nomentana, off Porta Pia; they are remembered by the two statues at the side of the entrance.
Maybe because Pope Pius IX was aware that his mercenary troops could not resist the Italian army, an angel holding the symbols of the pope was placed above the entrance, as if to protect the gate. 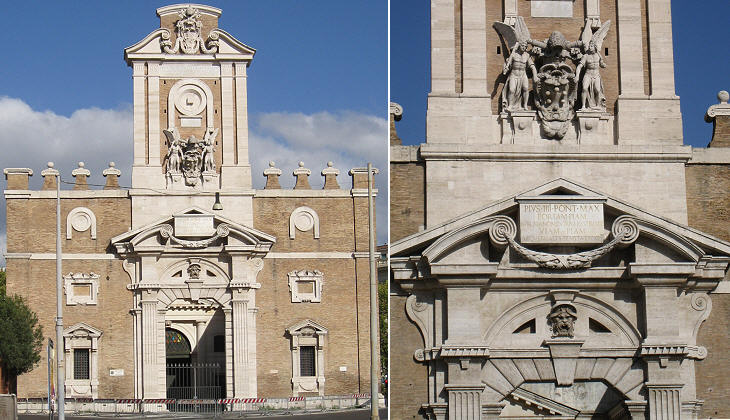 The inner gate and enlargement of its decoration

Michelangelo prepared three different sketches for this gate and Pope Pius IV apparently chose the least expensive one. The coat of arms was selected by Filippo Juvarra to open his book of drawings on the coats of arms of the popes. Porta Pia replaced in a slightly different position Porta Nomentana, aka Porta S. Agnese, because of the church of S. Agnese fuori delle Mura along Via Nomentana.
In general the monumental side of the gates of Rome is the external one. Porta Pia is an exception: the decoration of its internal side was meant to provide a grand ending to the new street opened by the Pope. 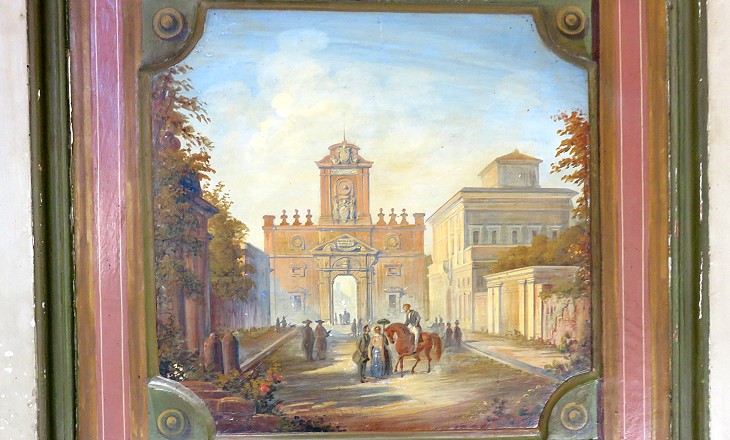 The Popes were proud of their accomplishments in the embellishment of Rome and often had them painted on the walls of their palaces. Pope Pius IX included repairs he made to Porta Pia in 1853 among his achievements (the upper part of the gate had been struck by lightning). The view is interesting because it provides us with a colourful image of Porta Pia and of a nearby palace which was enlarged in the early XIXth century by the Torlonia (who had a grand villa along Via Nomentana). 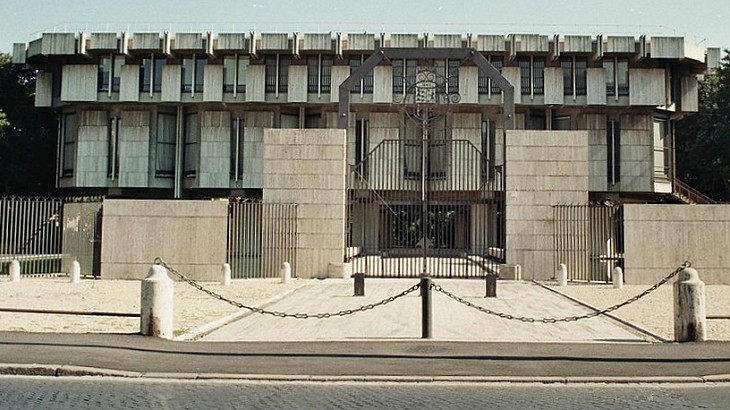 Villa Costaguti Torlonia was eventually acquired by the United Kingdom, but on October 31, 1946 the palace was blown up by Irgun, a Zionist paramilitary organization. It did not have architectural or historical features worth its being reconstructed as it was. The new one was designed in the so-called Brutalist style which was based on the use of raw concrete (you may wish to see some modern buildings, all outside the walls of Rome).

The Walls between Porta Pia and Castro Pretorio 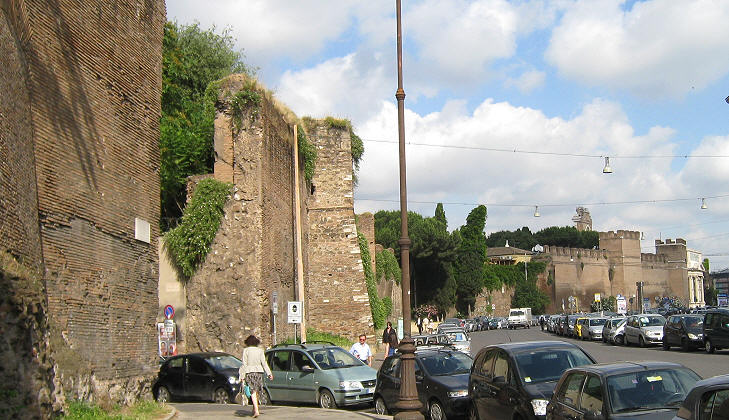 Porta Nomentana can still be identified in the section of the walls to the east of Porta Pia. The towers near Porta Pia were strengthened in the XVth century by Pope Nicholas V and by Pope Pius II. 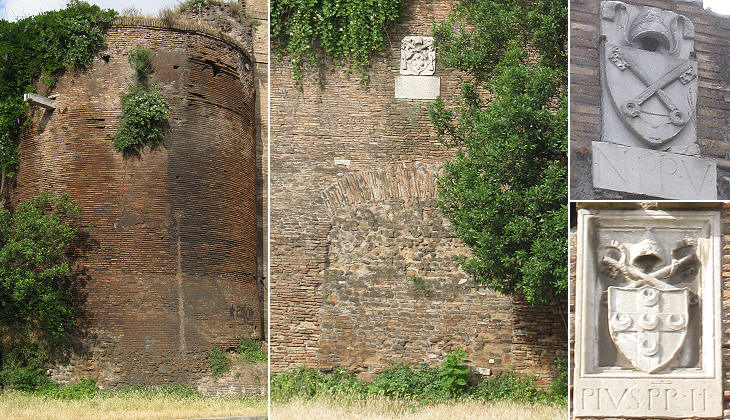 (left) Ancient tower which protected Porta Nomentana; (centre) the site of Porta Nomentana and the inscription and coat of arms which were placed by Pope Pius IV above it; (right) coats of arms of Pope Nicholas V (above) and Pope Pius II (below)