Porta Latina
(Vasi at work in the Grand View of Rome)

Links to this page can be found in Book 1, Map A4, Day 5, View C10 and Rione Campitelli.
The page covers: 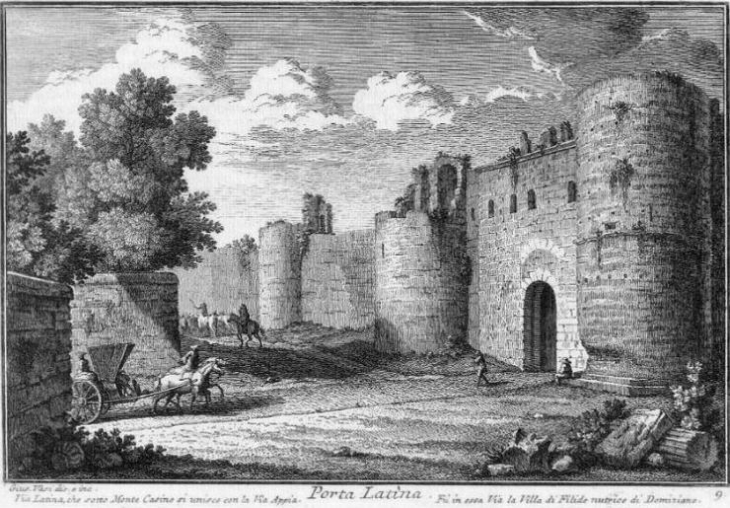 Porta Latina was a minor gate both at the time of ancient Rome and in 1747 when Giuseppe Vasi depicted it in this etching. Via Latina, the road going through the gate, branched off Via Appia at S. Cesareo in Palatio and eventually joined it again at Cassino, halfway between Rome and Naples. Because of the limited importance of the road, Porta Latina was closed for long periods. The plate shows very clearly that the tower to the right of the gate was built above an existing square construction, most likely a tomb.
In the description below the plate Vasi wrote that Phyllis, wet nurse of Emperor Domitian had a house along Via Latina, where she cremated the emperor's body after he was murdered in his palace. The view is taken from the green dot in the 1748 map here below which shows: 1) Porta Latina; 2) S. Giovanni in Oleo; 3) S. Giovanni a Porta Latina. The adjoining 1924 map shows 1) Torre dell'Angelo; 2) Roman fountain in Via Cesare Baronio; 3) Mausoleo dei Cessati Spiriti; 4) Tombe della Via Latina. 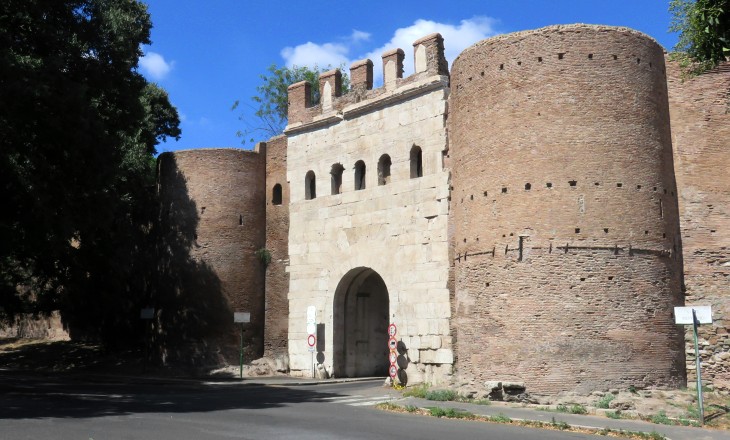 The area outside the gate was intensively developed after WWII, but traffic flows through modern openings at Porta Metronia and Porta Ardeatina , so Porta Latina retains the rather quiet appearance it has in the plate; the level of the ground has risen since the XVIIIth century and therefore the height of the entrance is lower than it was. 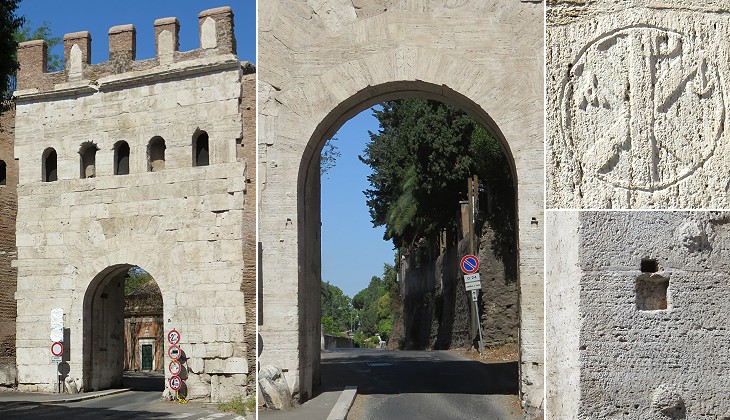 (left) Porta Latina; (centre) the view from the gate towards Rome; (right-above) keystone decorated with a Chi-Rho, one of the earliest forms of Christ's monogram, combined with Alpha and Omega in a circle; (right-below) "apotropaic" bumps

The original entrance built by Emperor Aurelian was modified at the time of Emperor Honorius when a sliding door was added to strengthen the gate: the door was operated from a specially built room above the entrance. The towers were reinforced by Belisarius and Narses, the Byzantine generals who conquered Rome in the VIth century. 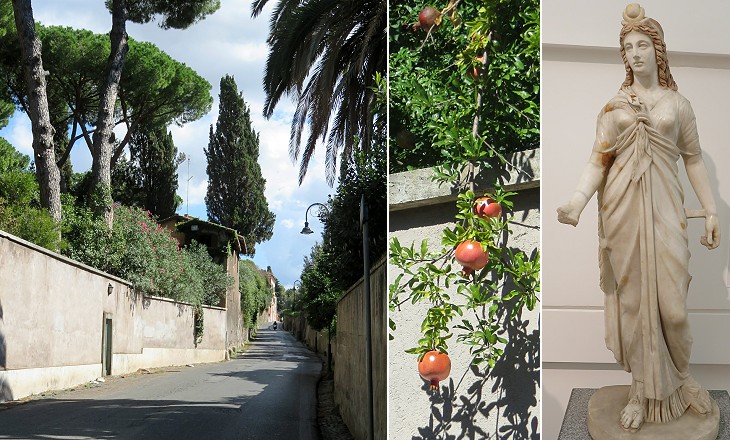 (left/centre) Via di Porta Latina towards Rome; (right) Museo Nazionale Romano: smaller than life statue of Isis found at Villa Grandi (late IInd century AD). The knotted piece of cloth and the headdress are typical of the goddess

Via di Porta Latina has retained the aspect it had in the XVIIIth century, but in the 1930s farms and kitchen gardens which were hidden by high walls at the sides of the street were replaced by luxury villas. Among them that built for Dino Grandi, son-in-law of Mussolini. 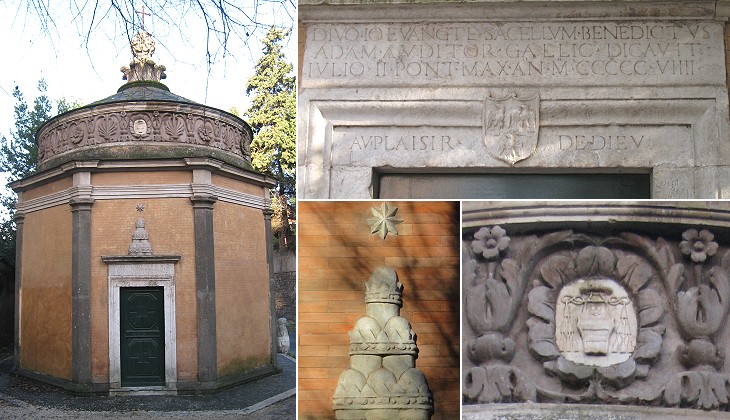 According to tradition St. John the Evangelist spent his last years in Ephesus and Patmos. Tertullian, a Christian historian of the IIIrd century, reports that St. John was brought to Rome at the time of Emperor Domitian. He was thrown into a cauldron of boiling oil, but was not harmed; the episode is portrayed in a fresco at SS. Nereo ed Achilleo. A small chapel was built in medieval times on the assumed site of the miracle (in Oleo means in oil).
The current building was said to have been designed by Donato Bramante in 1509, but today it is thought to be a work by Antonio da Sangallo the Younger or Baldassarre Peruzzi; it was built at the expense of Benoît Adam, a French prelate at the court of Pope Julius II.
In 1658 Francesco Paolucci, titular cardinal of nearby S. Giovanni a Porta Latina, commissioned Francesco Borromini a restoration of the roof.

The decoration of the new roof was based on the flower which was part of the cardinal's coat of arms; Borromini wrapped with flowers also the very unusual central cap of the roof (which you can see in the image used as background for this page). 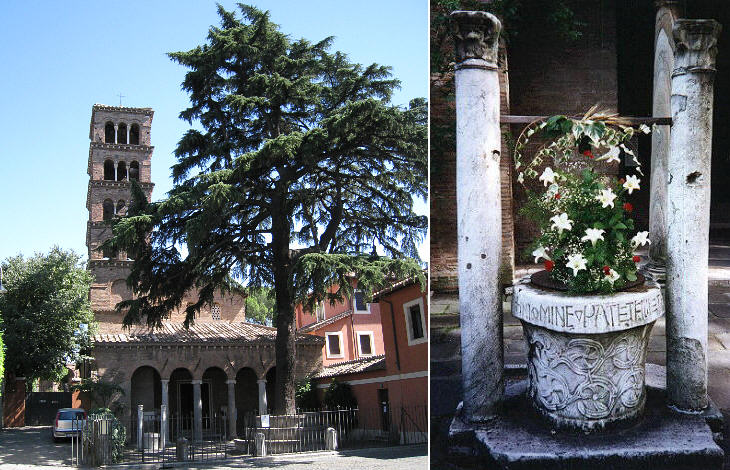 Today the church has a XIIth century appearance, but its history dates back to the Vth century and goes forward to the XVIIIth century. It was probably built before the Byzantine conquest of Rome when this part of the city was still supplied with water by many aqueducts; after these were broken the area fell into abandonment and the church was taken care of by hermits; in the XIIth century it was restored and decorated with paintings and a Romanesque bell tower was added. 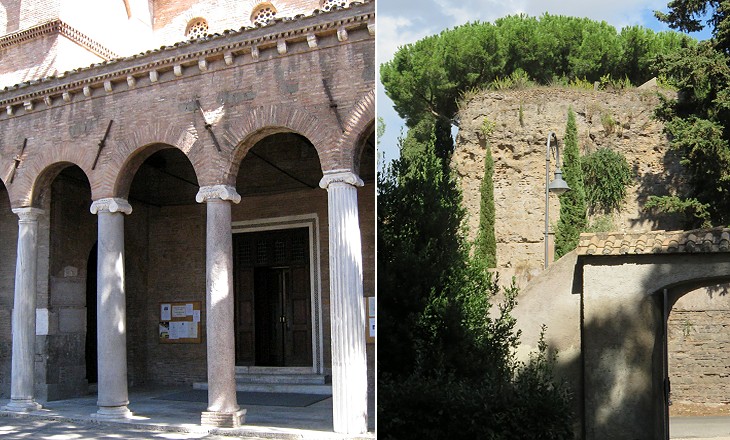 (left) The portico with four ancient columns of different size, material and shape; (right) ancient tomb which stands behind the church

In 1517 S. Giovanni a Porta Latina became the titular see of a cardinal and this ensured its survival (you may wish to see it in an illustration from a 1588 Guide to Rome where the tomb behind the church is shown). 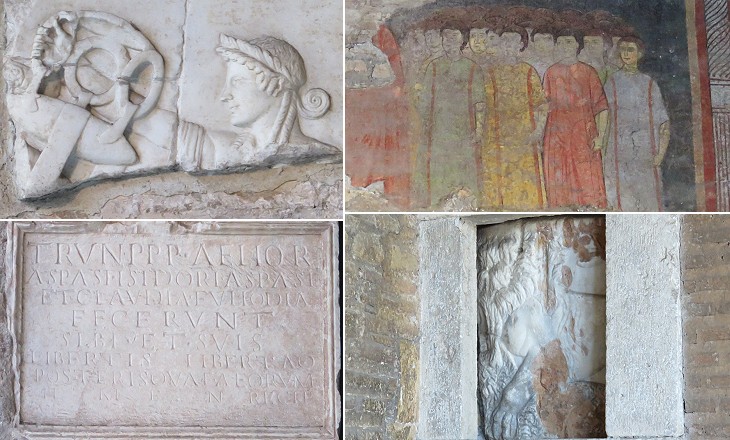 The portico is a small museum because it houses ancient inscriptions and reliefs which were used as building material or, in the case of the round end of a sarcophagus, as part of the "wheel" through which hermits received offerings. The walls were painted with frescoes that are almost entirely lost. 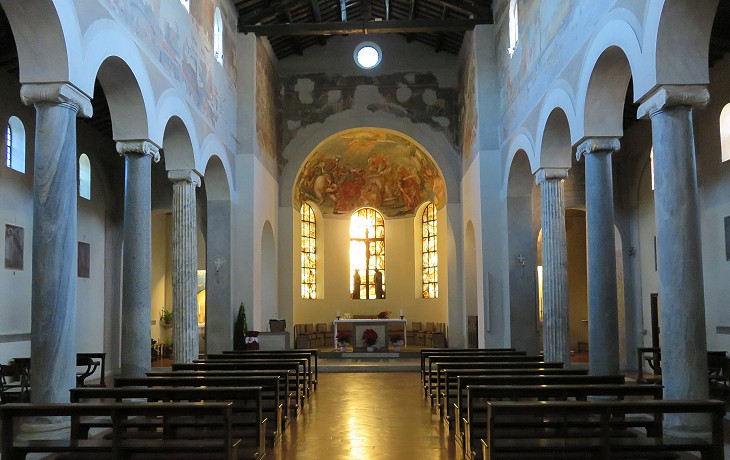 In the early XXth century medieval paintings on the walls of the main nave were discovered behind later additions: it was the starting point of a long restoration process which ended in the 1940s and which returned the whole interior of the church to its assumed XIIth century appearance. 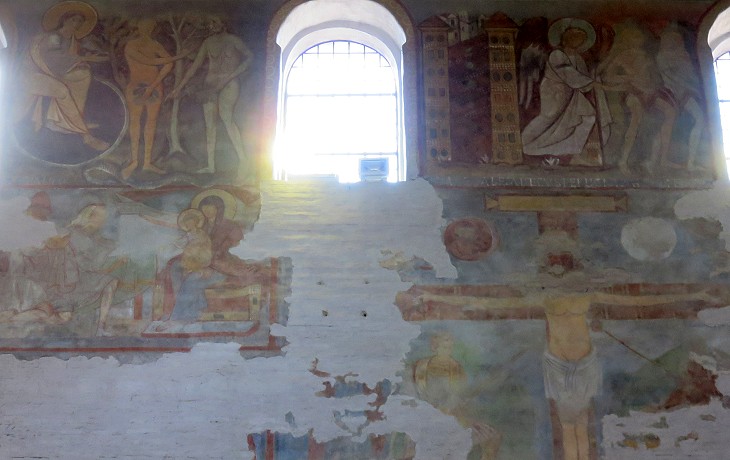 The frescoes are dated late XIIth century and were made by a team of at least four painters. Their outlines have lost preciseness and in some places one can only distinguish patches of colour, yet the cycle of paintings is interesting for its complexity and the orderly depiction of nearly fifty scenes. Eighteen are taken from the Old Testament and the others portray events of the Life of Jesus Christ. Because of humidity the frescoes require periodical and lengthy restorations. 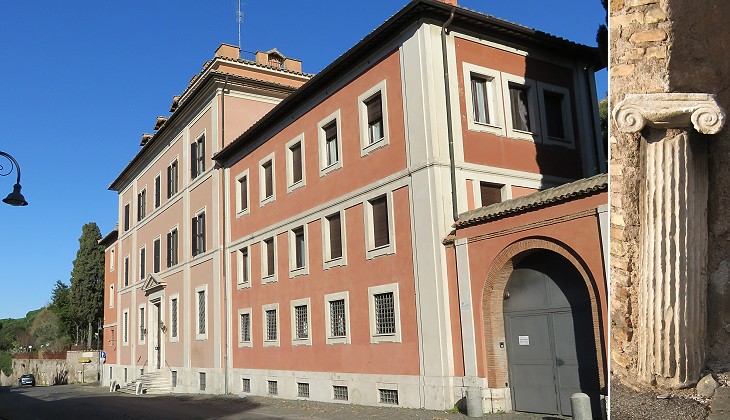 (left) Collegio Antonio Rosmini along Via di Porta Latina; (right) an ancient column at the corner of the short street leading to the church

The small monastery adjoining the church was rebuilt in the XVIIIth century and enlarged in the 1940s. It houses the Institute of Charity of the Missionary College (Rosminian Fathers).
S. Giovanni a Porta Latina is situated behind it in a very evocative small square. 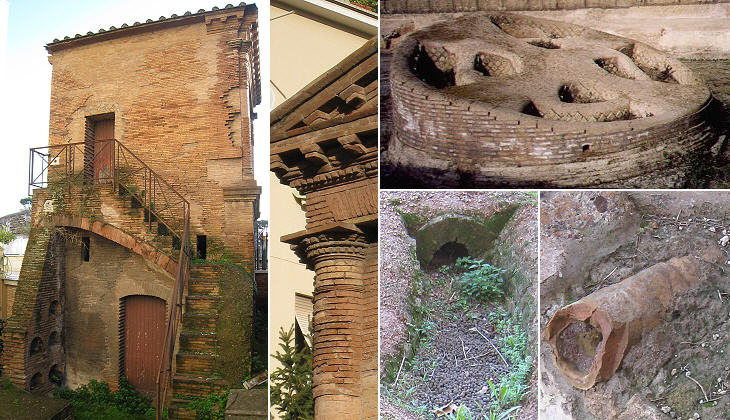 (two left images) Torre dell'Angelo and a detail of its brick decoration; (three right images) fountain in Via Cesare Baronio and details of its pipes

Via Latina had limited importance, but nevertheless it was chosen by the ancient Romans as a site for erecting funerary monuments or building countryside residences. Today its initial stretch runs through a highly populated neighbourhood; some of the modern blocks hide in their cellars parts of tombs which were uncovered when their foundations were excavated. Yet a walk along modern Via Latina (which broadly follows the route of the ancient one) leads to seeing some interesting memories of the past.
Torre dell'Angelo is a IIIrd century AD three-storey brick tomb and it was used as a tower during the Middle Ages; the wall near the lower entrance retains niches where urns containing the ashes of the dead were kept.
In 1980 excavations made for the opening of a new street uncovered the pool of a IInd century AD Roman villa; it had at its centre a circular fountain with holes to be used by fish during spawning. 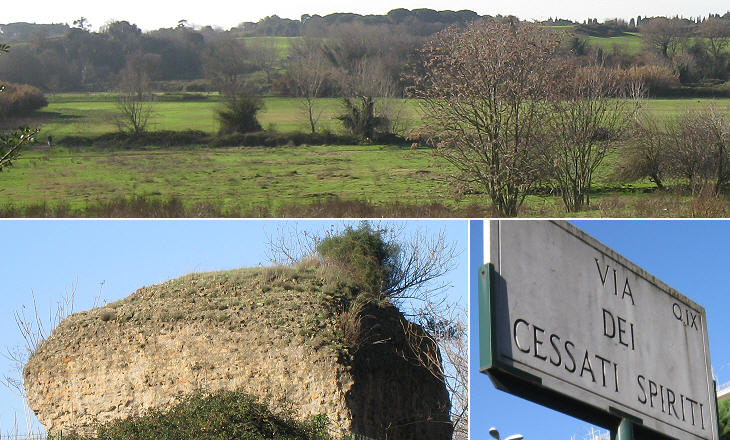 (above) View of Valle della Caffarella from Via Latina; (below) Mausoleo dei Cessati Spiriti

Modern Via Latina borders the eastern side of Valle della Caffarella where it flanks the ruins of a large Republican tomb, with traces of travertine decoration. Its name (Cessati Spiriti means "gone away ghosts") is not referred to a story of ghosts living in the tomb, but to a nearby inn where XIXth century travellers were often robbed of their horses or carriages while they were having some food and drink. The thieves were called spiriti because they disappeared into the reed bed of Valle della Caffarella. The papal government placed a police station near the inn and the spiriti left the area.

At the time of its discovery this sarcophagus retained faint traces of blue and red paints which highlighted the central inscription and some details of the relief, e.g. the wings of the Victories. The sarcophagus was dedicated by four freedmen and their wives to their deceased patroness Ulpia Domnina. They referred to themselves as alumni, a word which was usually associated with children/pupils. They were perhaps orphans adopted by Ulpia Domnina or she had a motherly affection for them. 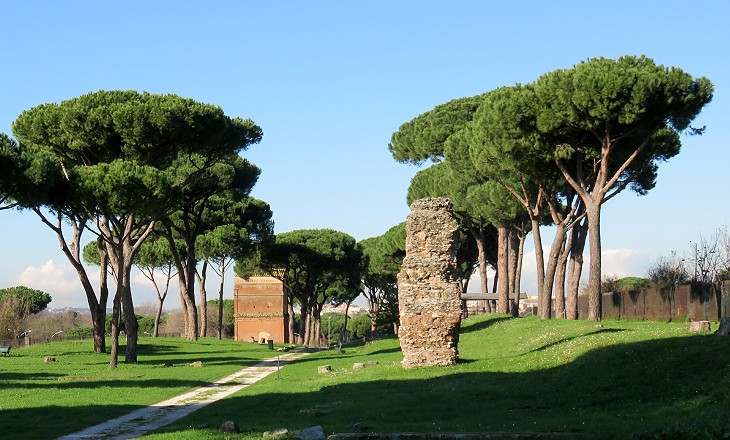 A section of Via Latina at its fourth mile was excavated in 1857 and a number of tombs were identified. They recall some of the funerary monuments of Via Appia Antica and today they are included in a small archaeological area. 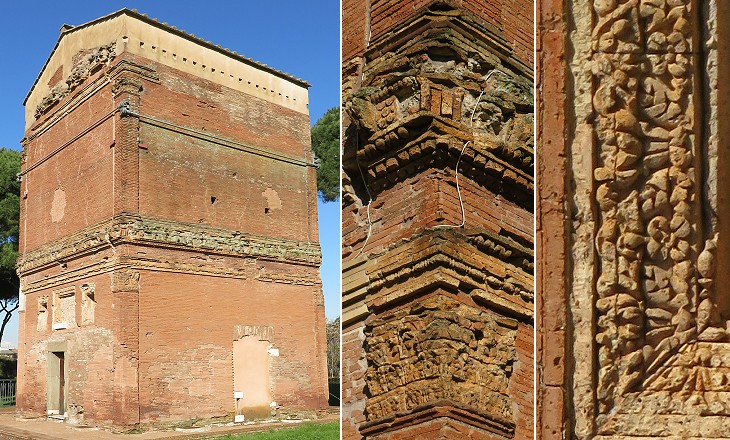 A hayloft turned out to be a three-storey Roman tomb. It is called Tomba Barberini because in the XVIIIth century the area belonged to this family. It is very similar to Sepolcro di Annia Regilla in nearby Valle della Caffarella. 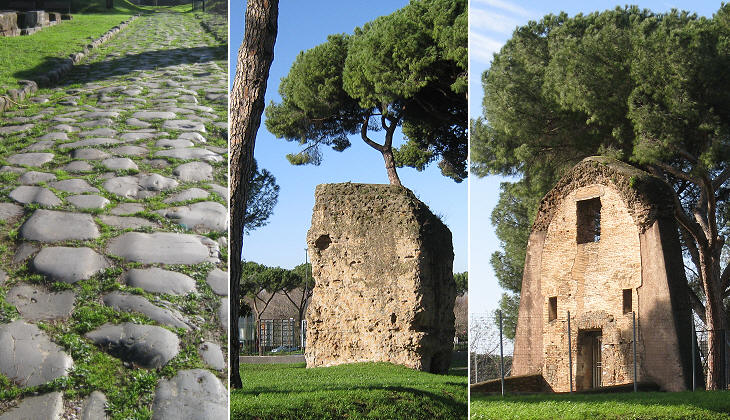 In the text accompanying the etching Vasi quoted an epigram written by Decimius Magnus Ausonius, a Latin poet of the IVth century AD:

Ex sepulchro Latinae viae.
Non nomen, non quo genitus, non unde, quid egi,
Mutus in aeternum sum, cinis, ossa, nihil.
Non sum; nec fueram: genitus tamen e nihilo sum.
Mitte, nec exprobres singula: talis eris.
On a tomb along Via Latina.
Not a name, nor a reference to my father, nor to my country, what am I?
I am dumb forever, ashes, bones, nothing.
I am not; nor was I: I was born out of nothing.
Pay your respects and do not blame me; you will suffer the same fate.

These words were echoed in several funerary inscriptions of the XVIIth century (see a page on Memento Mori - remember that you will die). 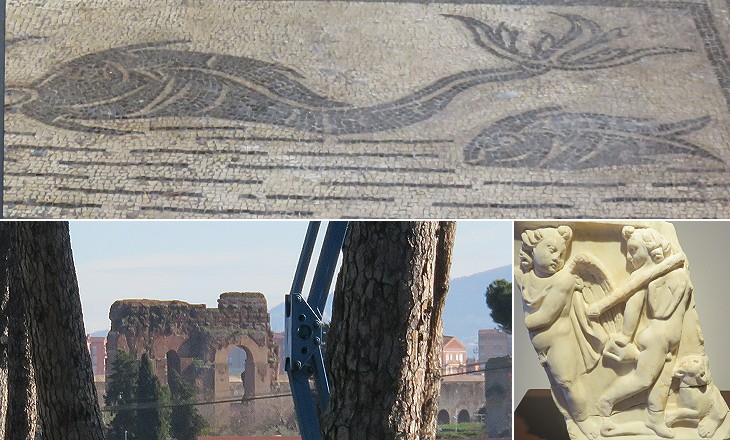 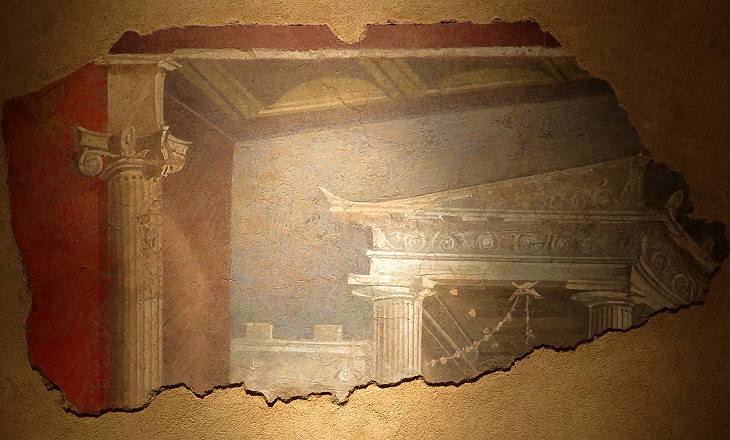 GRA is the acronym of Grande Raccordo Anulare, a ring road encircling Rome which was completed in 1970. A that time the city was entirely comprised within GRA, but eventually new developments were built beyond the road, especially in its south-eastern section. Many of them are named after a medieval tower (e.g. Tor Tre Teste) and during their construction a number of ancient statues, mosaics, coins etc. were found. Eventually it was decided to house some of these findings in a small museum near GRA. 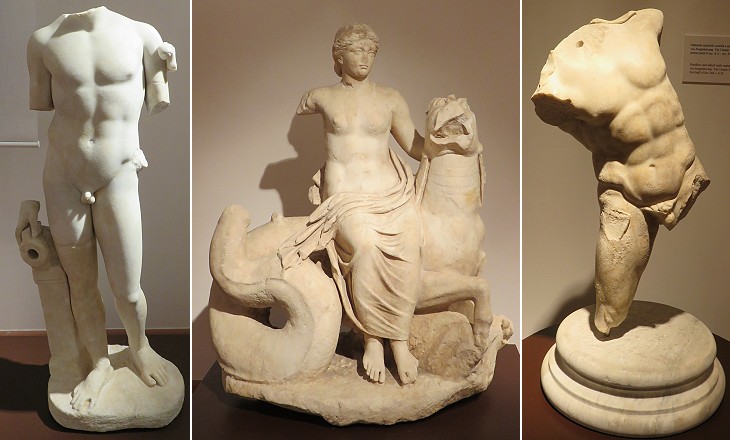 The museum was inaugurated in March 2015 and it is housed in two buildings, one of which belonged to a farm. It is in the middle of nowhere, but it is not very far from the entrance to Villa dei Quintili along Via Appia Nuova and there is a bus service between the two locations. At the moment (2016) it is open only on Tuesday and Thursday mornings. Via Lucrezia Romana is a modern street named after Lucretia, wife of Tarquinius Collatinus. 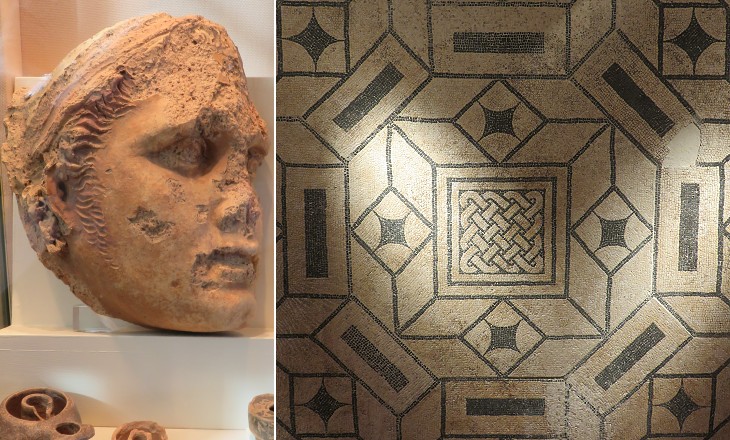 The Walls between Porta Latina and Porta S. Sebastiano 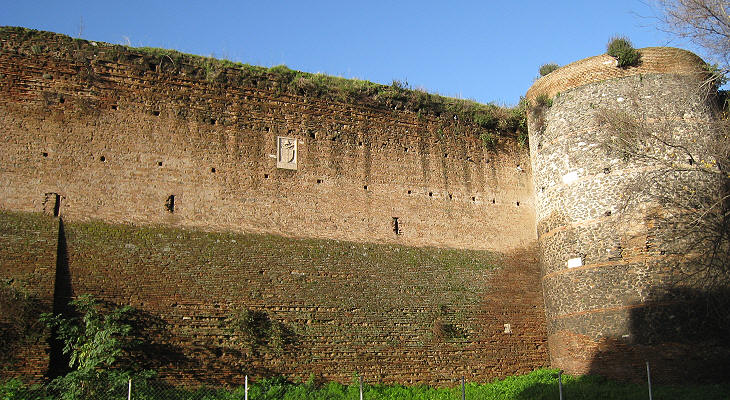 In the etching Vasi shows a third circular tower in addition to the two protecting the gate. It is different from the others, although it has approximately the same size because it was built in the XIIth century with flints rather than with bricks. The ancient Romans had advanced brick making knowledge which fell into disuse during the Middle Ages. 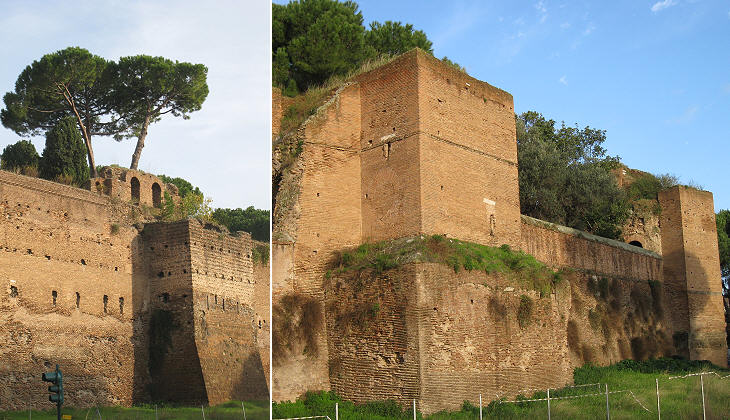 Other views of the walls

This section of the walls is very charming because of the presence of trees, especially stone pines (which were not very common at Vasi's time). Many towers were repaired by the popes, who did not miss the opportunity to place their coats of arms on them. 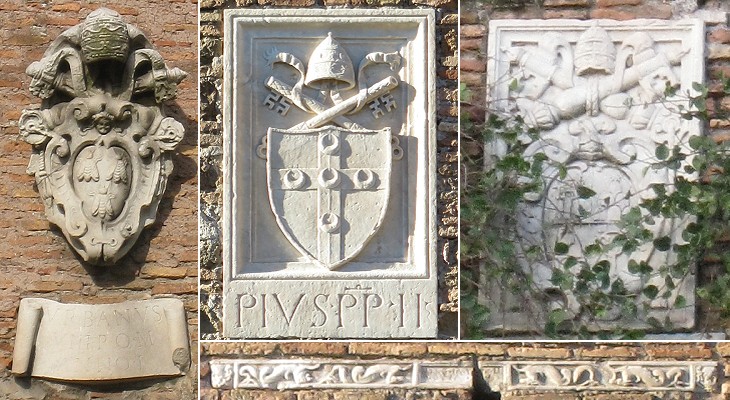 The Walls between Porta Latina and Porta Metronia 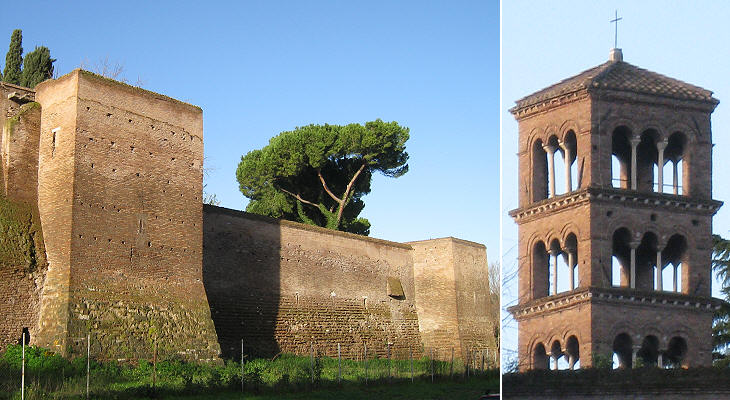 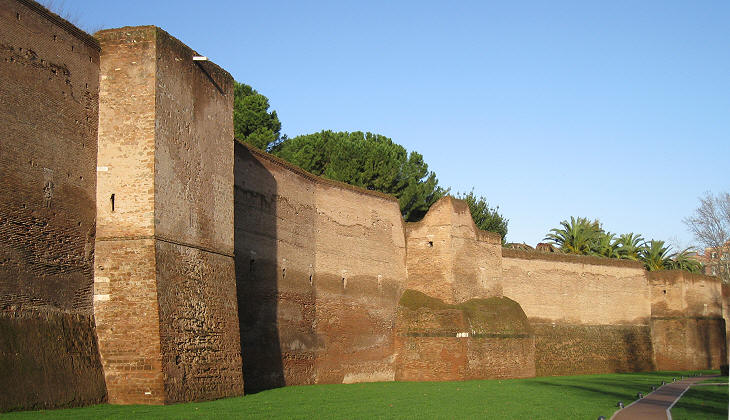 This section of the walls was recently turned into a small park by reducing the width of the modern street which runs along it. It is used by those who cannot go to Valle della Caffarella to walk their dog there.