S. Maria in Monticelli
(Vasi at work in the Grand View of Rome)

Links to this page can be found in Book 6, Day 7, View C8 and Rione Regola. 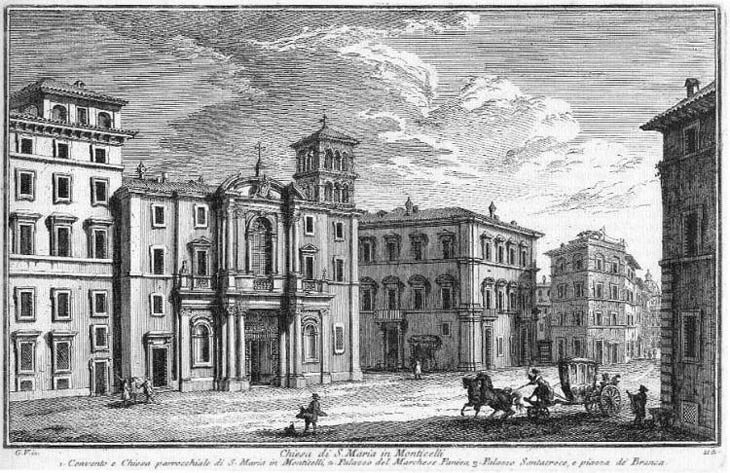 In 1756 when Giuseppe Vasi published his book on the parish churches of Rome he could choose the twenty churches which illustrated the book among seventy-two. He might have chosen S. Maria in Monticelli because it housed the relics of five martyrs from Palermo in Sicily and Vasi was born near that city.
The view shows a part of Rione Regola which, although being very close to the River Tiber, was not affected by floods, because it was located on a small mound (monticelli = small mountains).
The view is taken from the green dot in the small 1748 map here below. In the description below the plate Vasi made reference to: 1) S. Maria in Monticelli; 2) Palazzo del Marchese Panizza; 3) Palazzo Santacroce opposite S. Carlo ai Catinari. The small map shows also 4) Case di S. Paolo; 5) S. Carlo ai Catinari and 6) Casa di Alessandro Lancia. The dotted line in the small map delineates the border between Rione Regola and Rione S. Eustachio (upper right corner). 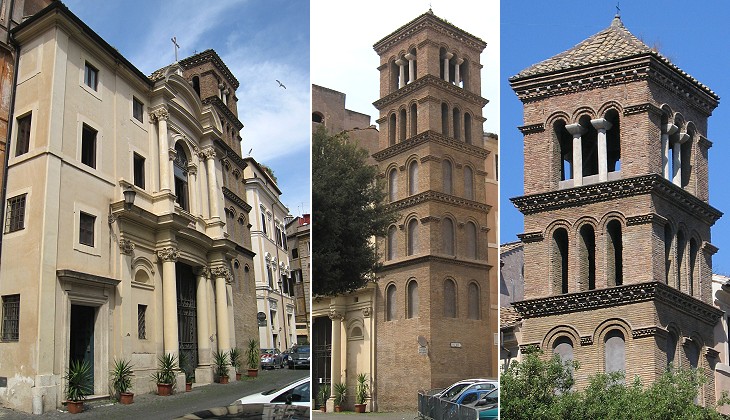 The street shown in the left part of the plate ended at a beach on the river which Vasi showed in another plate. The redesign of the river banks in the 1880s impacted on the street which is now a dead end. In 1914 the construction of Ministero di Grazia e Giustizia, a huge building, led to demolishing the houses opposite the church.
The bell tower was built in the XIIth century and it was taller, but the two upper storeys were pulled down in the early XVIIth century; its lower part has been stripped of its XVIIIth century facing. 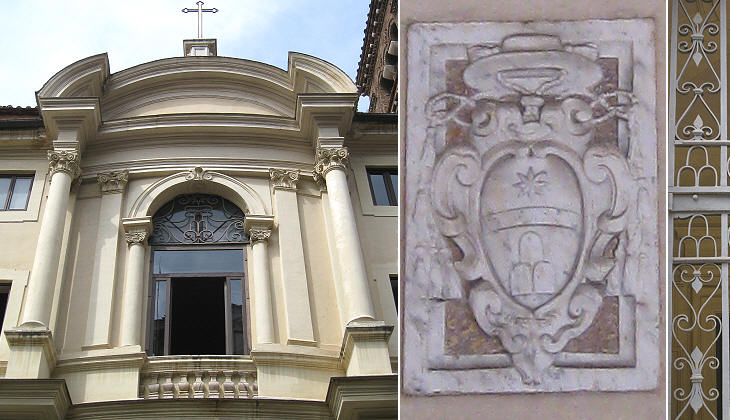 S. Maria in Monticelli is a very old church, but it was almost entirely rebuilt in the XIIth century; in 1715 a major restoration was promoted by Pope Clement XI. The new façade was designed by Matteo Sassi and it had a (lost) coat of arms of the pope at its top; the heraldic symbols of the pope however can be seen in some details of the decoration. In 1726 the church was assigned to Padri Dottrinari (Christian Doctrine Fathers) who still have their headquarters in the adjoining monastery. (left) Interior; (right-above) fragment of a mosaic in the apse; (right-below) fragment of an early XIIth century fresco portraying a Pope on a side wall

Giuseppe Vasi always commended the initiatives taken by the Popes (the publication of his books needed to be authorized by a commission of three high-ranking priests). In a rare breach of his line of conduct he had harsh words for the way the interior of the church was redesigned and in particular for the almost total destruction of the ancient mosaic which decorated the apse. It showed Jesus Christ standing on a small mountain out of which four streams representing the gospels flowed. In the lower part of the mosaic some sheep drank from them. The symbols of the Four Evangelists were depicted in the background. It might have been similar to the mosaic in the apse of S. Prassede. 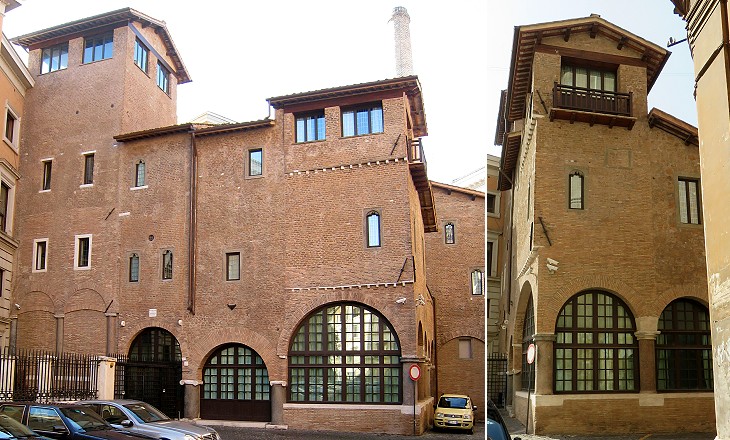 S. Maria in Monticelli is very near S. Paolo alla Regola which was built upon an ancient house where St. Paul lived while awaiting trial. A group of XIIIth century houses on the left side of the church are called Case di S. Paolo; several granite columns taken from ancient buildings were used to build their porches; they now house offices of the adjoining Ministero di Grazia e Giustizia. 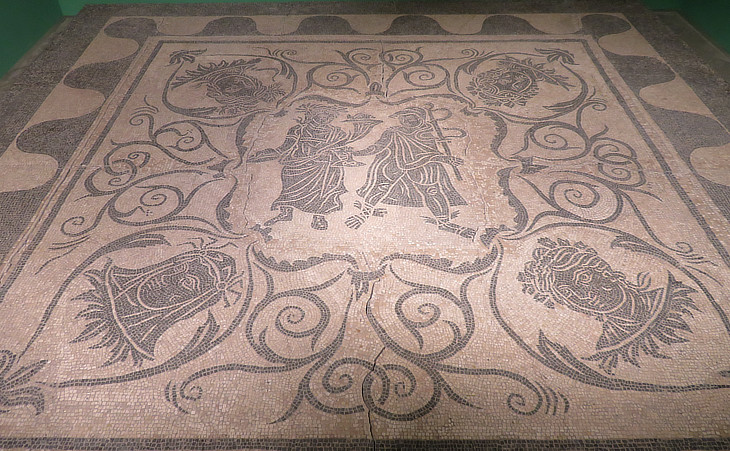 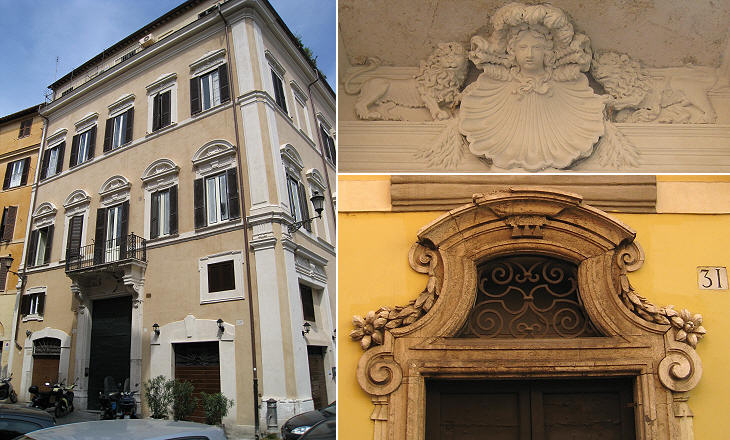 (left) Overall view; (right-above) detail of the decoration (the shell is shown in the image used as background for this page); (right-below) detail of a portal of a small palace near Palazzo Paniza

Palazzo Panizza was designed in 1694 by Simone Felice Delino and it is an interesting late XVIIth century building with an elaborate relief in the portal. Vasi names it after a Marquis Paniz(z)a, but there is not such a family in the directory of the Roman noble families; the surname is typical of northern Italy, especially of Mantua, and so maybe Marquis Panizza lived in the palace on a temporary basis. 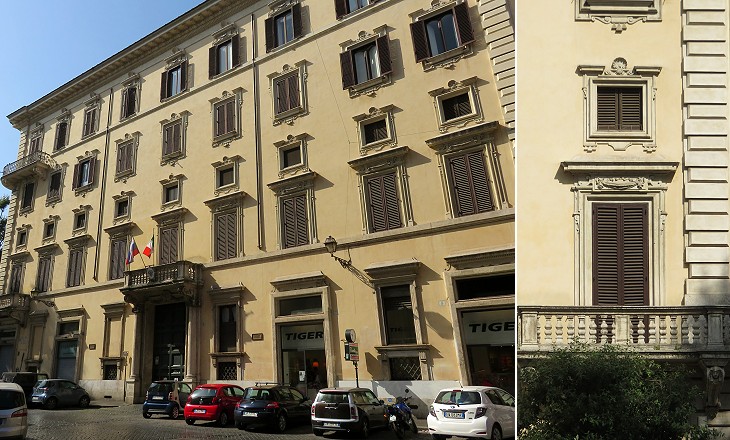 The Santacroce were one of the oldest families of Rome; they had their houses in Rione Sant'Angelo where they built an elegant Renaissance palace. They acquired great wealth in the late XVIth century thanks to Cardinal Prospero Santacroce who introduced the use of tobacco in the Papal State. His heirs played a major role in its merchandising and in 1598 they were able to start the construction of a large palace opposite S. Carlo ai Catinari. It was completed in 1630-1640 by Francesco Peparelli and enlarged in 1670-1672 by Giovanni Antonio de' Rossi. The latter designed also an elegant small adjoining garden.

Detail of the main portal; the coat of arms shows a rampant lion holding a quince branch (left), the heraldic symbol of the Sforza di Santa Fiora, and the cross of the Santacroce (their surname means Holy Cross)

The late XIXth century coat of arms on the main portal calls to mind one of the most beautiful and influential women of her time. Countess Vincenza di Santa Fiora, née Santacroce, is said to have been the mistress of King Umberto I of Italy, who was married to Queen Margherita, another beautiful woman. 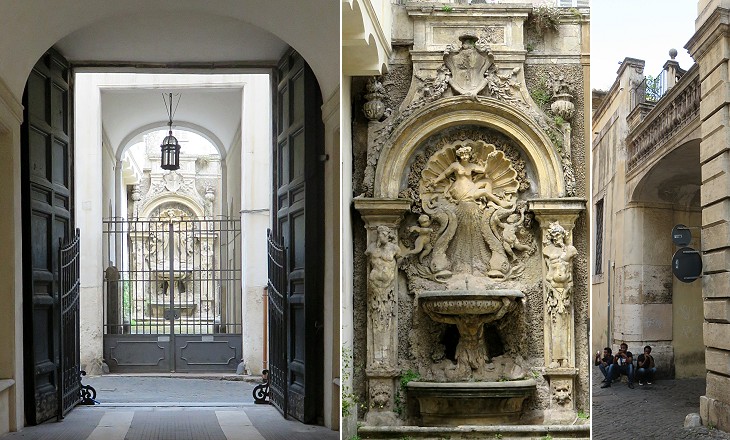 (left) View from the courtyard across Vicolo dei Catinari, a narrow side street; (centre) XVIIIth century fountain showing Venus in a shell in the former garden; (right) bridge linking the palace to the garden, similar to those at Via della Pilotta. The three sitting men from Eritrea had temporarily left the church where they attended Mass to answer/make telephone calls

Palazzo Santacroce was built in an overcrowded neighbourhood, so its owners had to content themselves with a small pensive garden and an even smaller garden at ground level. Similar to what was done at nearby Palazzo Spada a fountain provided a fine perspective to those standing in the courtyard of the palace. 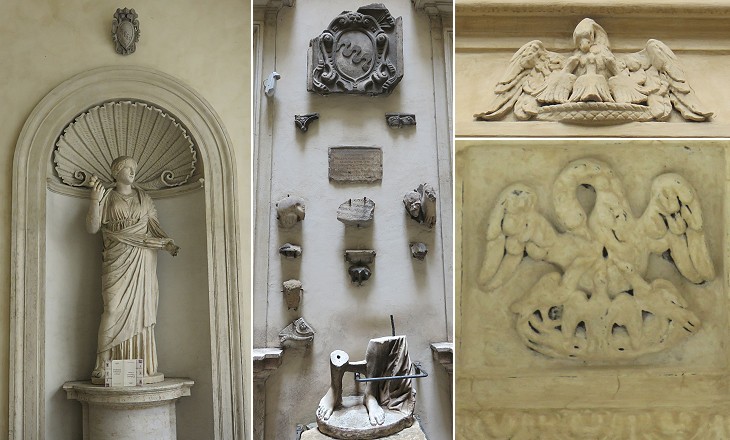 (left) A statue in the courtyard; (centre) fragments of ancient statues and inscriptions; the coat of arms resembles that of the Caetani, the family of Pope Boniface VIII, but it actually belongs to the Pasolini dall'Onda, a family from Ravenna who bought the palace in 1904; (right) reliefs showing a mother pelican striking her breast with the beak to feed her young with her own blood, a symbol of the Passion of Jesus Christ, which can be seen in the decoration of S. Maria in Publicolis, a church where many Santacroce were buried, and at Oriolo, a fiefdom of the family Vanishing fresco with the coat of arms of Pope Paul III in 2009 ...

The street leading from the bridge of Palazzo Santacroce to the small church of S. Salvatore in Campo (today the church of the Eritrean community in Rome) is very narrow and the unaware passer-by may fail to notice the painted façade of a Renaissance house. It belonged to Alessandro Lancia who held important positions in the Papal court at the time of Pope Paul III. You may wish to see another colour painted Renaissance palace. This kind of decoration was a development of that based on the graffito technique which was rather popular in the early XVIth century (see Palazzo Ricci and Palazzi di Via della Maschera d'Oro). 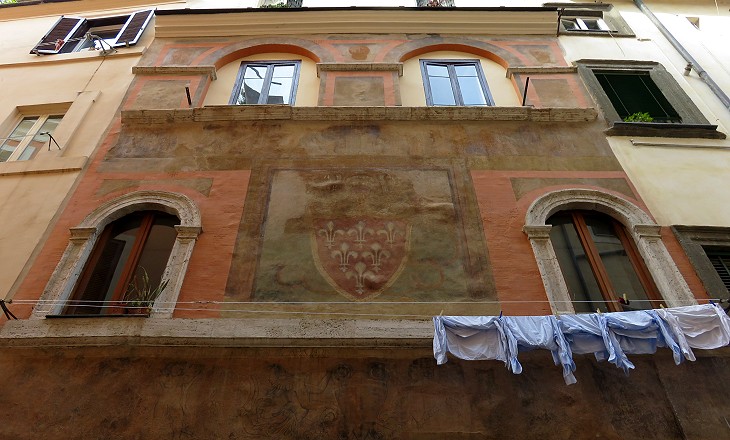 You may notice that in this and other Renaissance houses windows were placed at a distance from one another which provided room for paintings.