Chiesa di S. Marco
(Vasi at work in the Grand View of Rome)

Links to this page can be found in Book 6, Day 1, View C7 and Rione Pigna. 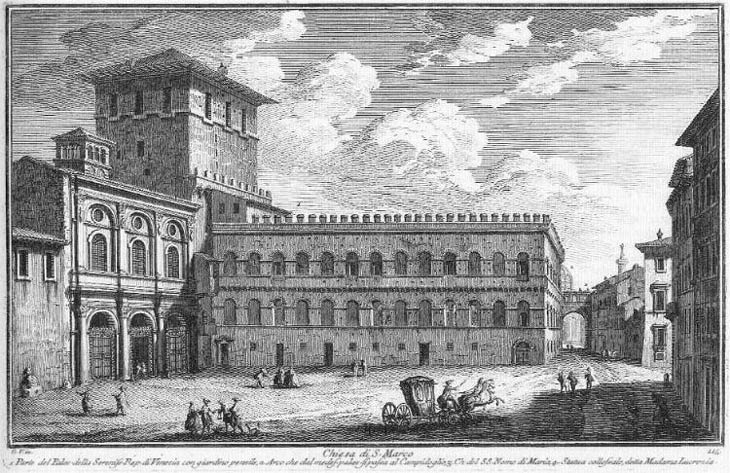 In 1756 Giuseppe Vasi included an etching showing Basilica di S. Marco in his book on the parish churches of Rome. Because of its history, size and decoration the building could have been covered in a previous book on the most ancient churches. Vasi showed the palaces adjoining the basilica (Palazzo and Palazzetto Venezia) in two previous etchings (Plate 39 and Plate 65). They were built at the initiative of Pope Paul II, who promoted also the redesign of the church.
The view is taken from the green dot in the small 1748 map here below. In the description below the plate Vasi made reference to: 1) Palazzetto Venezia; 2) Arch linking Palazzetto Venezia with the Franciscan Monastery of S. Maria in Aracoeli; 3) SS. Nome di Maria; 4) Madama Lucrezia. 3) is shown in detail in another page. The small map shows also 5) Basilica di S. Marco; 6) Tower of Palazzo Venezia. The dotted line in the map delineates the borders of four rioni: Pigna (upper left corner), Campitelli (lower left corner), Trevi (upper right corner) and Monti (lower right corner). 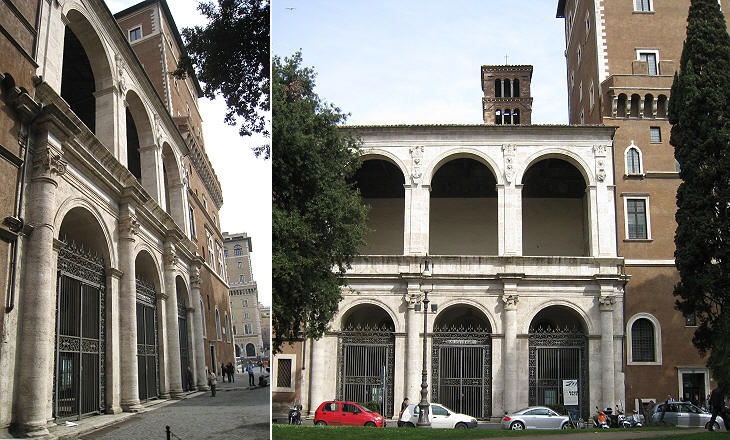 In 1911 Palazzetto Venezia was demolished to allow a better view of Monumento a Vittorio Emanuele II. The construction of that monument had already led to pulling down an archway which linked Palazzetto Venezia with the Franciscan Monastery of S. Maria in Aracoeli. It is shown also in another etching. In 1916 the loggia of Basilica di S. Marco was brought back to its original design by demolishing the walls which closed it. In 1928-1930 the buildings opposite the church were pulled down too: they included the house of Pietro da Cortona, mentioned by Vasi in his guide to Rome, and SS. Venanzio and Ansovino, a parish church. 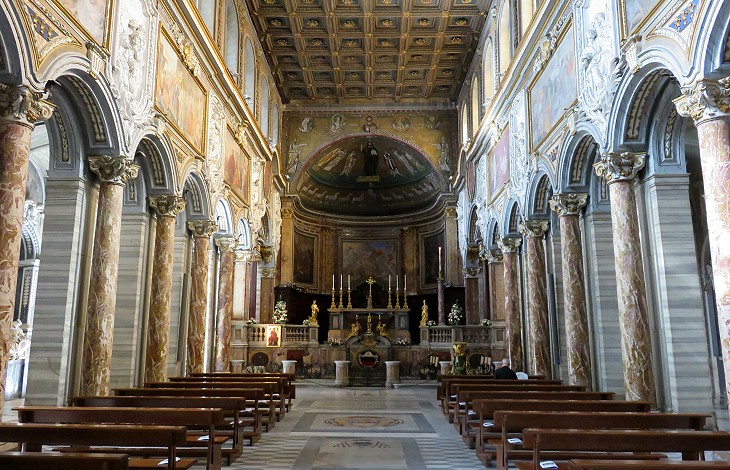 Two elements speak about the age of the building, notwithstanding the many changes it underwent. Its floor is at a level which is lower than that of the street and the mosaic of the apse portrays Pope Gregory IV, the founder of Gregoriopolis, when he was still alive and therefore in 828-844.
According to tradition the initial church was built by Pope St. Mark in the IVth century and only at a later time it was dedicated to St. Mark the Evangelist. It was rebuilt in the VIIIth century and again in the IXth century. Supposedly at that time its floor was above the level of the neighbouring area. Its layout is that of a typical ancient basilica; it does not have a transept and the funerary chapels which characterize most Roman churches. Its ancient episcopal chair is now at Museo Pio-Clementino. 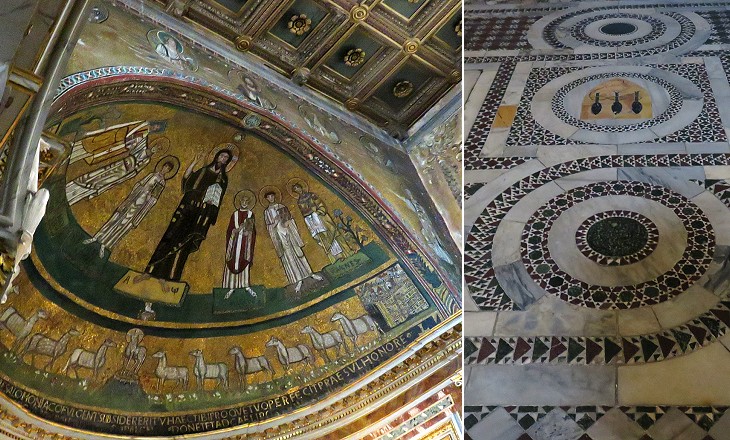 (left) Mosaic of the apse; (right) fragment of the Cosmati decoration of the pavement

The mosaic of the apse has many points in common with those that Pope Paschal I commissioned a few years earlier for S. Prassede and S. Cecilia. They marked a short period of artistic revival in Rome.
In the XIIth century the floor was decorated and perhaps raised. The issue of its low level was discussed in the XVIIth century because it made the building prone to humidity and subject to major damage in case of floods, but it was not modified. 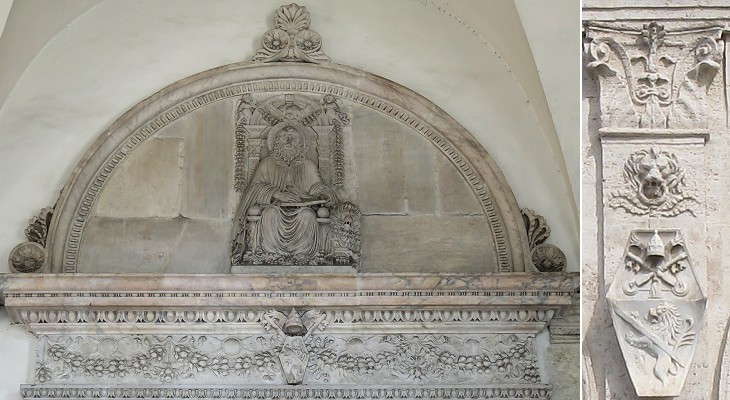 The basilica was embellished with a fine Renaissance loggia at the expense of Cardinal Pietro Barbo, who became Pope Paul II in 1464. His coats of arms, both as a cardinal and as a pope, are placed in many parts of the building and his heraldic symbol (a lion) is also a main motif of the decoration. The Pope was Venetian and this explains his devotion to St. Mark, the patron saint of Venice. The loggia was used by Pope Paul II for blessing the crowd, because he continued to reside in the adjoining palace after having been elected pope (you may wish to see the loggia in a 1588 Guide to Rome). 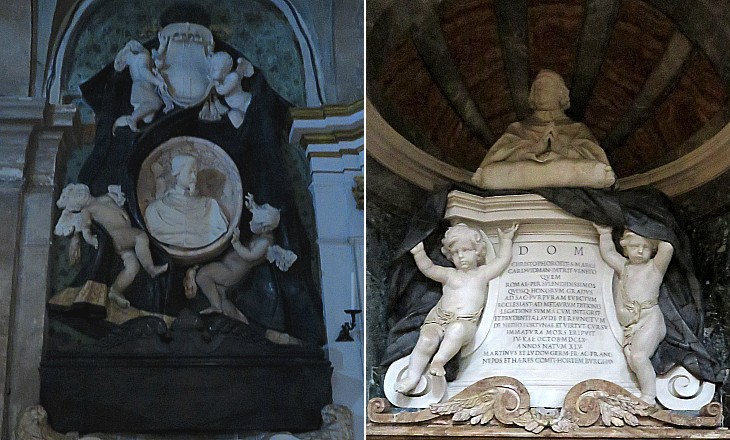 S. Marco was the national church of the Venetian community in Rome. This explains why so many Venetian cardinals were buried there. The monument to Cardinal Marcantonio Bragadin shows the influence of Bernini's Monument to Maria Raggi; Cardinal Bragadin had the same name as his uncle who commanded the garrison in Famagusta, the last Venetian stronghold in Cyprus, which fell to the Turks in 1571 (Marcantonio Bragadin was flayed alive). The monument to Cardinal Cristoforo Vidman is one of many XVIIth century monuments showing the dead in the act of praying. 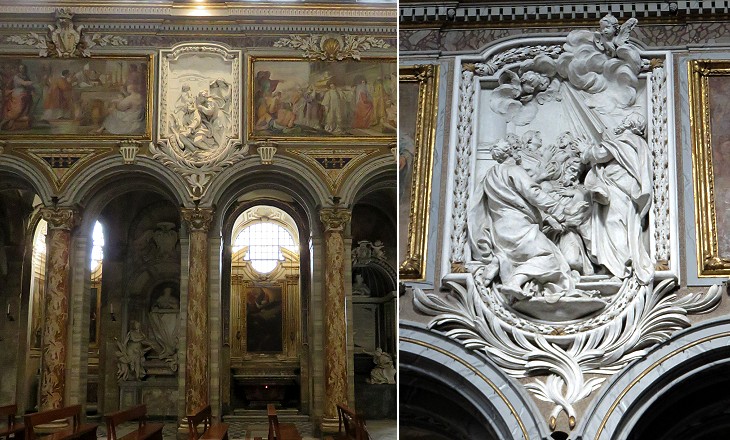 In 1735 Cardinal Angelo Maria Querini, of a noble Venetian family, commissioned a major redesign of the interior. Unfortunately because of its low position and the fact that neighbouring Palazzo Venezia reduces the light on its right side, the elegant interior designed by Filippo Barigioni cannot be fully appreciated. 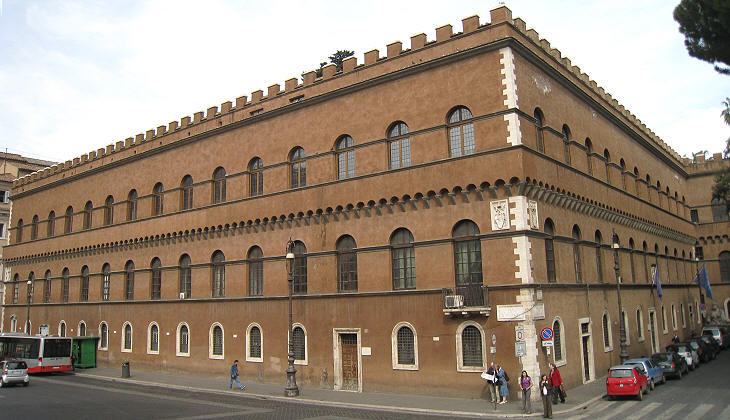 Two sides of Palazzetto Venezia were rebuilt to the left of the church, opposite their previous location. The building was known for its viridarium, a pleasure garden with a fountain where Pope Paul II enjoyed walking, a practice he shared with the Roman emperors who did this in their palaces on the Palatine (the garden can be seen in the small map at the beginning of the page). 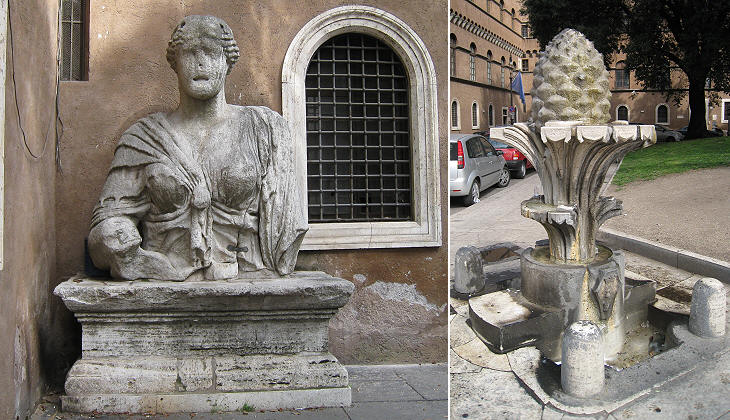 (left) Madama Lucrezia (the face is shown in the image used as background for this page); (right) 1929 fountain with the symbol of Rione Pigna by Pietro Lombardi

Madama Lucrezia is still at the same location shown in the plate. It is the mutilated marble bust of a colossal statue of a woman with a knot of Isis tied into her clothing which represented the union of divine and human forces. The statue most likely decorated Iseo Campense, a gigantic temple to the goddess and to Serapis, her husband. You may wish to see the knot in a highly restored statue of the goddess.
Madama Lucrezia was one of the talking statues of Rome, similar to Pasquino and Marforio. It was perhaps named after Lucrezia d'Alagno, mistress of Alfonso I, King of Naples (better known as Alphonso V, King of Aragon). She had to leave Naples after the death of Alfonso in 1458 and she eventually moved to Rome. 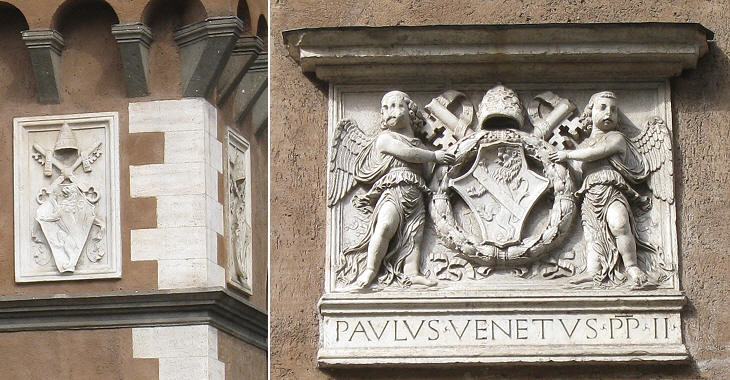 Palazzetto Venezia: coats of arms of Pope Paul II: they show the move from medieval to Renaissance patterns