The earliest churches of Rome were either new constructions built on the sites where martyrs had been buried or the result of changes made to halls in private houses where the first Christians used to meet for prayer. Because the new faith spread rapidly among the ordinary people who lived on the Esquiline Hill, this neighbourhood retains some very old churches which in origin were private houses.
Giuseppe Vasi underlined the long history of SS. Silvestro e Martino ai Monti by showing its medieval apse rather than its XVIIth century façade.
The view is taken from the green dot in the small 1748 map here below which shows: 1) SS. Silvestro e Martino ai Monti and some of the other early churches in the area: 2) S. Maria Maggiore; 3) S. Prassede; 4) S. Pudenziana; 5) S. Pietro in Vincoli and 6) S. Lucia in Selci. 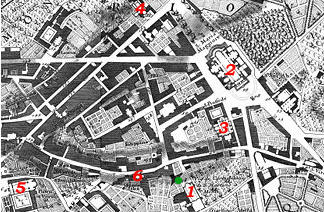 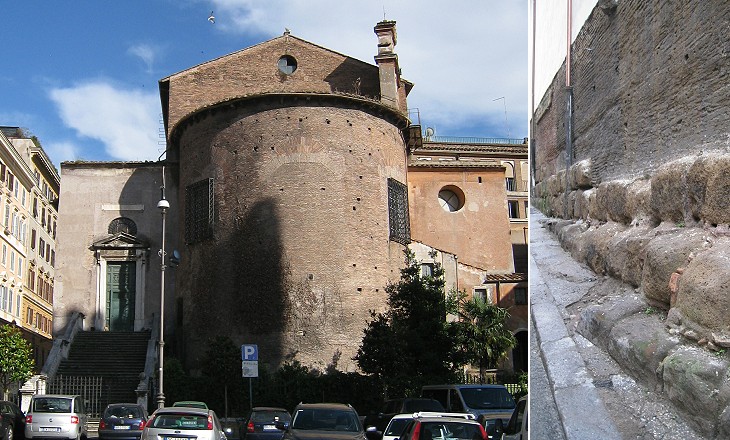 (left) The view in June 2009; (right) stones taken from the Servian walls which were used to level the ground where the church was built

The level of the ground in front and at the side of the apse was lowered in the late XIXth century, thus some more steps were added to the staircase leading to the rear entrance to the church. According to tradition a domus ecclesiae, a hall where the Christians met, was established in the house of a relative of St. Sylvester, the pope who is best known for the (forged) medieval document claiming that Emperor Constantine donated the City of Rome and the entire Roman Empire to him.
Historians believe that a nearby separate church was dedicated to St. Martin; it is uncertain to which church the oldest parts of the current building belong.
In the middle of the IXth century a new church dedicated to both saints was built above the ancient structures; the apse belongs to this period.
In 1299 SS. Silvestro e Martino was assigned to the Carmelites; in the XVIIth century the church was largely renovated by Filippo Gagliardi, a painter aka Filippo delle Prospettive because he usually worked with other colleagues and took care of the architectural perspectives of a painting (you may wish to see one of his works which shows a party at Palazzo Barberini). The façade he designed for SS. Silvestro e Martino is rather traditional when compared to those of other Roman Baroque churches (you may wish to see the façade as it appeared in a 1588 Guide to Rome). During the renovation of the interior the Carmelites and Gagliardi decided to lower the floor of the church in order to increase the visibility of the crypt which housed some relics; this explains why the ancient columns are placed above a high base; the design of the medieval building which was based on that of a Roman basilica was retained, although the interior was entirely redecorated. 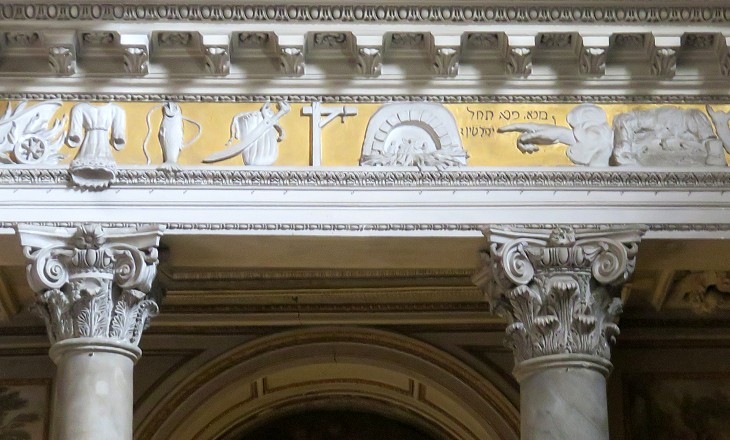 Detail of the frieze on the right side of the nave; the size of the capitals had to be adjusted to make up for the different length of the ancient columns

The decoration of the interior was in part assigned to Paolo Naldini, of whom the friezes of the nave are the first known work. He eventually worked with Gian Lorenzo Bernini who highly praised him for his stucco works. Naldini was commissioned the stucco decoration of S. Maria Assunta at Ariccia, but he also executed two of the marble angels at Ponte S. Angelo.
The friezes at SS. Silvestro e Martino depict symbols and scenes from the Old Testament (right side) and from the New one (left side). 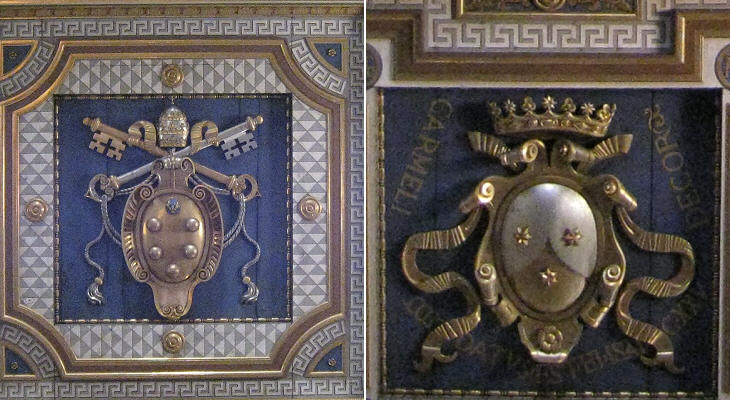 The massive ceiling is divided into compartments, and richly ornamented: in the compartment over the door and in that at the opposite extremity are the arms of S. Charles Borromeo, consisting of the word HUMILITAS crowned: next to that near the door are the arms of the Carmelite Order: the next are those of Pius IV., in whose time the ceiling was constructed at the expense of his nephew, S. Charles Borromeo
Rev. Jeremiah Donovan - Rome ancient and modern - 1843.
Gagliardi redesigned the ceiling, but the main elements of the old one were included in a new frame; the motto "humilitas" which can be seen in the image used as background for this page belongs to Cardinal Carlo Borromeo who promoted the construction of the first ceiling in 1560. You may wish to see a page on the ceilings of the churches of Rome. 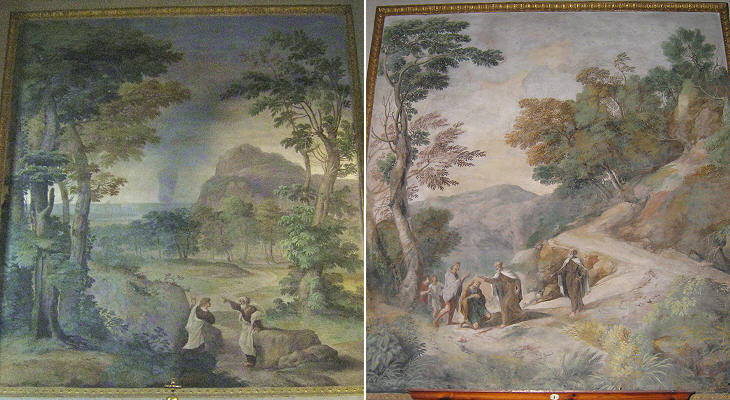 Because Prophet Elias had defeated the priests of Baal on Mount Carmel, the Carmelites commissioned Gaspard Dughet a series of frescoes showing episodes of the prophet's life. Dughet, a relative and a pupil of Nicolas Poussin, the famous French painter who spent most of his life in Rome, specialized in painting landscapes of the Roman countryside. In his frescoes at SS. Silvestro e Martino he gave more relevance to mountains and trees than to the prophet's deeds, similar to what was done before him by Polidoro da Caravaggio at S. Silvestro al Quirinale and Tarquinio Ligustri at S. Vitale.