In this page:
The Statues of the Angels in detail
in a previous page:
The plate by Giuseppe Vasi
Today's view
Ponte S. Angelo

Statues of the Angels

In a fresco (it opens in another window) Michelangelo portrayed David in the act of killing Goliath with his sword; in the marble statue which gave him immediate fame, he portrayed the young man in a resting position. In antiquity and until the time of Michelangelo statues were generally carved from a single block of marble; this explains why human figures rarely stretched their arms: this posture would have required a much bigger block. For this reason most of the heroes or gods who were portrayed in ancient statues had a dignified and composed body position and their garments fell to the ground without many folds.
In 1544 Raffaello da Montelupo attached metal wings to the marble statue of an angel at the top of Castel Sant'Angelo in order to overcome this constraint. In the second half of the XVIth century the technique for assembling a statue made up of different sections was improved and in 1580 the Abduction of the Sabines by Giambologna in Florence marked the beginning of a new era in marble sculpture.
Gian Lorenzo Bernini always paid a great deal of attention to how his statues would appear from different points of view. His early works for Cardinal Scipione Borghese (The Rape of Persephone, Apollo and Daphne and David) were equally viewable from different angles. Bernini gave instructions on the exact positioning of his statues: Apollo and Daphne was first to be seen from the back to discover only in a second moment that the nymph was being turned into a laurel tree. 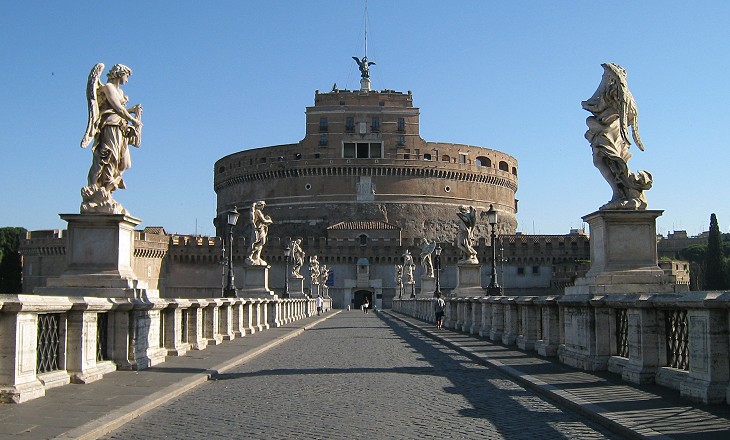 The ten statues of the angels

The statues of the angels were assigned by Bernini to eight other sculptors, as he reserved to himself the execution of two of the ten statues. Many of the selected sculptors were his pupils, but others had worked with Pietro da Cortona and Alessandro Algardi.
Bernini devised three points of view for the angels of the bridge, bearing in mind that people would be crossing the bridge in both directions. So in addition to the frontal view the statues can be seen also at a 45 degree angle. The angled view for those who came from Rome received more attention, because this was the first view for the pilgrims. Bernini used to prepare full-scale clay models to visualize the final effect of his statues from different points of view.
In the following set of photographs the first image shows the angled view from Rome, the second is a frontal view and the last image shows the angled view from Castel Sant'Angelo. 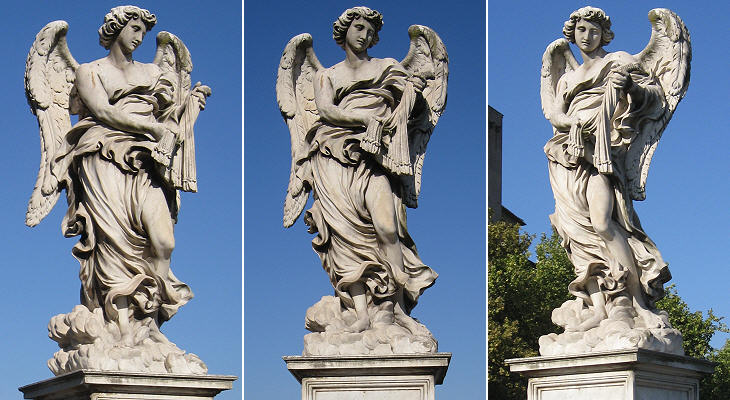 The wings of the angels were used to improve the view from different angles: one wing was best seen from Rome and the other from Castel Sant'Angelo; the torsion of the body was another technique for "giving something" to each angled view. 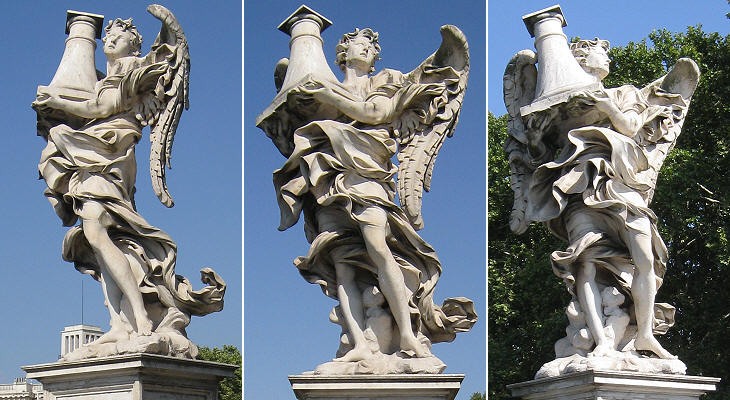 Raggi is regarded as the most "Berninian" of Bernini's pupils; in some aspects he exceeded his master; his angel is very tall and slender, the garment forms the most unlikely folds, the face is portrayed in a very ecstatic expression, the hair is extremely ruffled. 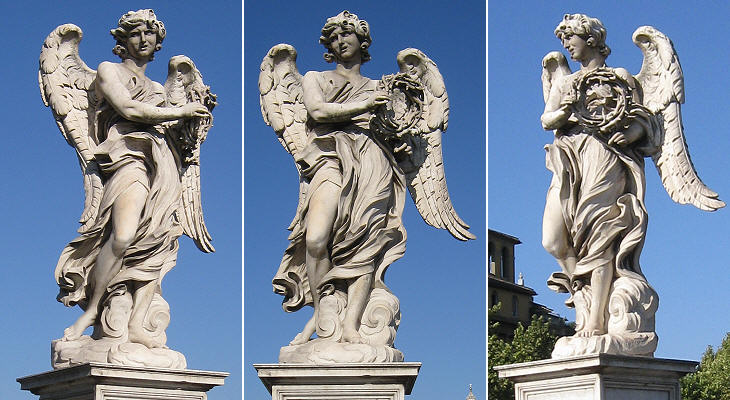 This is the only angel who expresses real grief. Cardinal Giacomo Rospigliosi, nephew of Pope Clement IX was so impressed by this and the other statue by Bernini that he wanted them for the Cathedral of Pistoia in Tuscany, his hometown. The statues never left Rome and they were eventually relocated to S. Andrea delle Fratte, a church opposite Bernini's house. 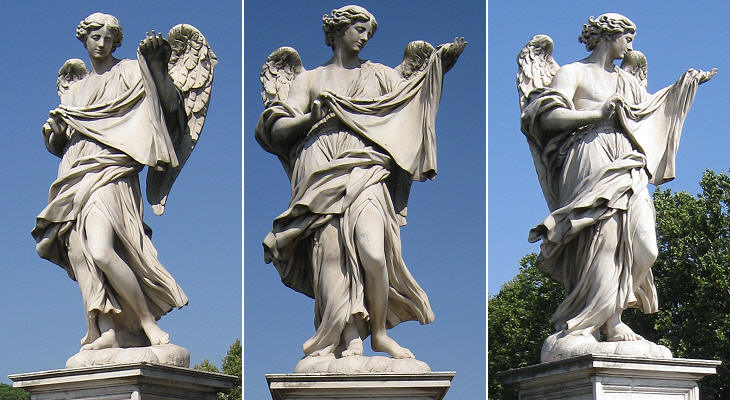 Fancelli worked for many years with Pietro da Cortona and although his angel is consistent with the overall plan of the statues, some aspects are treated in a different manner, especially the face and the hair. 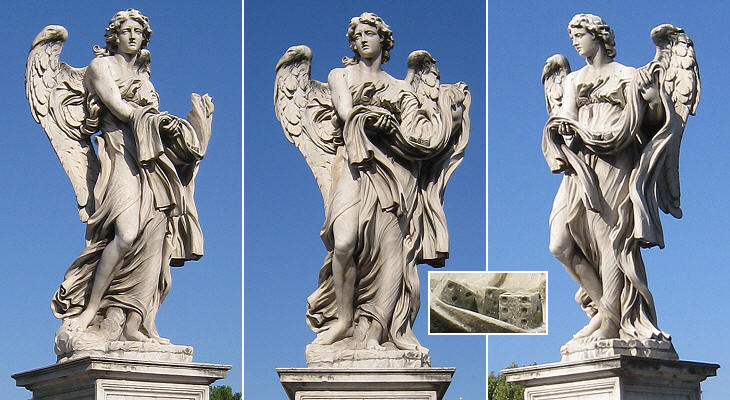 Naldini was so trusted by Bernini that he was charged with the execution of the copy of the angel with the crown of thorns. He and other sculptors mentioned in this page relied very much on being called by Bernini to cooperate in large projects, but they also tried to acquire direct commissions, mainly for works to be placed in provincial towns. It was probably with the objective of impressing his potential customers that Naldini decided to show his skill in the veiled leg of this angel. 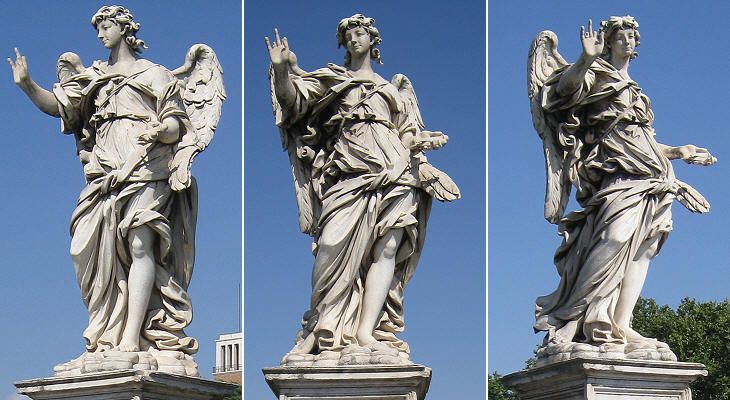 Lucenti started his career by working with Alessandro Algardi, the great rival (in sculpture) of Bernini and the leader of a school of thought which recommended not to depart too much from the works of the old masters. Lucenti did not forget the advice of his first master and his angel stands on a cloud as solid as rock, his garment is very static and the wings are almost neglected. 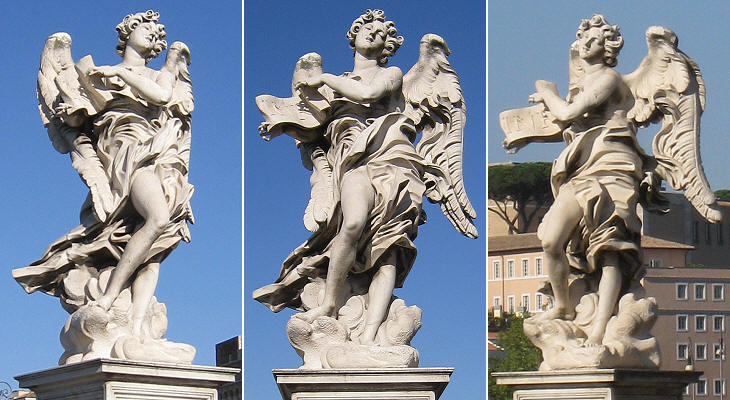 I.N.R.I. - the derogatory inscription replica by Bernini and Giulio Cartari; inscription: "Regnavit a ligno Deus" (after a religious hymn); it is shown also in the image used as background for this page

The spiritual tension of Bernini's age is expressed in this statue where the face of the angel is very similar to that of St. Teresa. When the cultural and religious climate changed, this statue became a symbol of an excessively theatrical art. 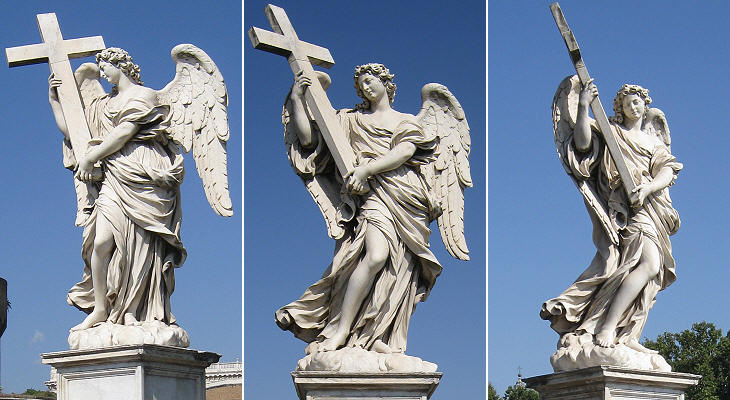 Ferrata was the senior member of the group of sculptors who cooperated with Bernini in this and other projects (e.g. Obelisco della Minerva); his angel is more composed than others: the statue follows the guidelines issued by Bernini, but without much enthusiasm. 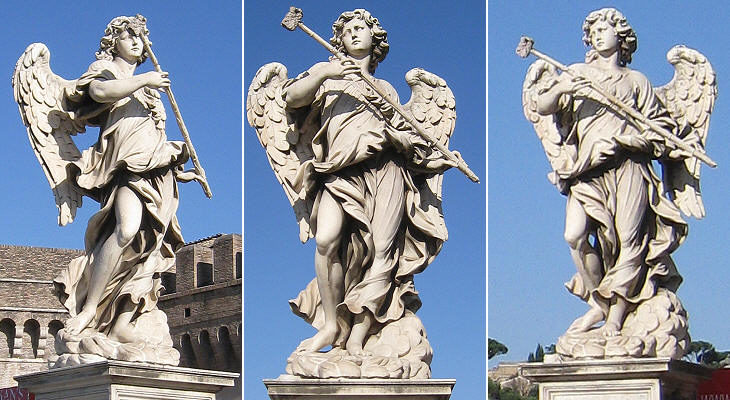 The offer of vinegar by Antonio Giorgetti; inscription: "Potaverunt me aceto" (Psalm LXVIII)

Antonio Giorgetti was a young sculptor who died before completing his angel; the statue was most likely finished by his brother Giuseppe who later on sculpted a fine St. Sebastian. It is evident that Giorgetti did not depart from Bernini's recommendations. 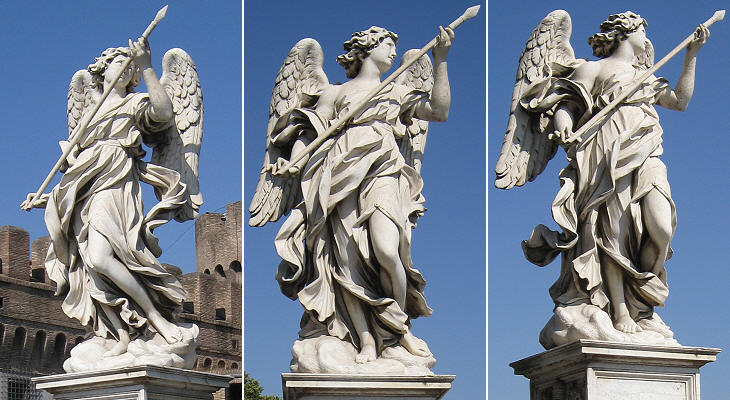 After the death of Alessandro Algardi in 1654, Guidi was the only sculptor in Rome to have a workshop competing with that of Bernini. His assistants were not much more than stone cutters, but this allowed him to sell his statues at a lower price than that charged by Bernini and his inner circle. Probably Bernini could not avoid asking Guidi to have a role in the decoration of Ponte S. Angelo.
The decoration with statues of the bridge inspired the Jesuits of Prague who promoted a similar decoration for the main bridge of their city.

During the XIXth century the statues were regarded as the triumph of bad taste. Charles Dickens had them in mind when in 1846 he called breezy maniacs the subjects portrayed by Bernini and his disciples whose every fold of drapery is blown inside-out; whose smallest vein, or artery, is as big as an ordinary forefinger; whose hair is like a nest of lively snakes; and whose attitudes put all other extravagance to shame.